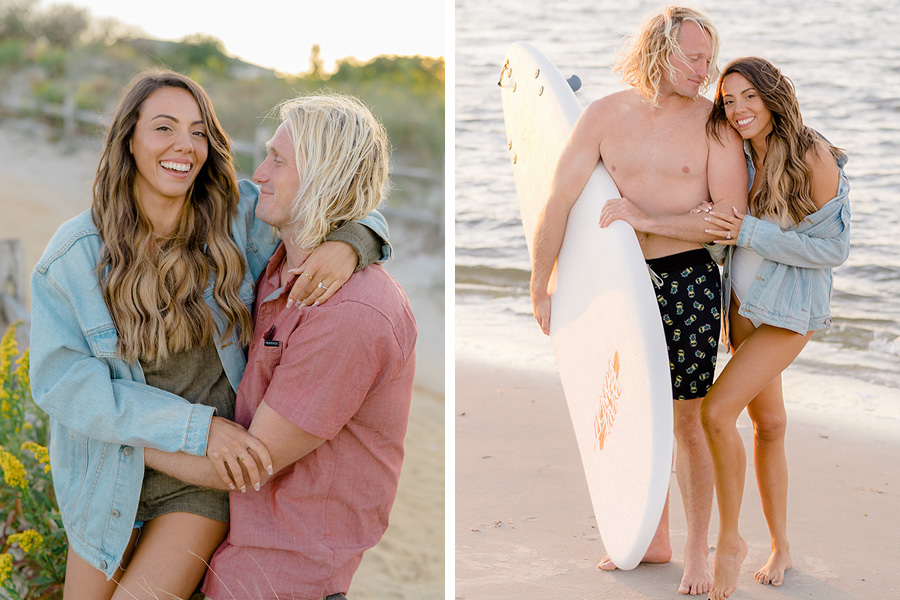 Jordan Verni and Ben Gravy’s Jersey Shore engagement shoot captured their passion for the beach and each other. Photography by Magdalena Studios

A summertime escape to the beach sounds pretty good right now — sand in our toes, waves crashing, sunsets with our beloved. So this Jersey Shore engagement shoot gives us all the feels. Pro surfer Ben Gravy and his bride-to-be spent the day lounging in the sand and frolicking in the waves in Ocean City, New Jersey, and photographer Magi Fisher of Magdalena Studios snapped every splashy moment. Check it out below. 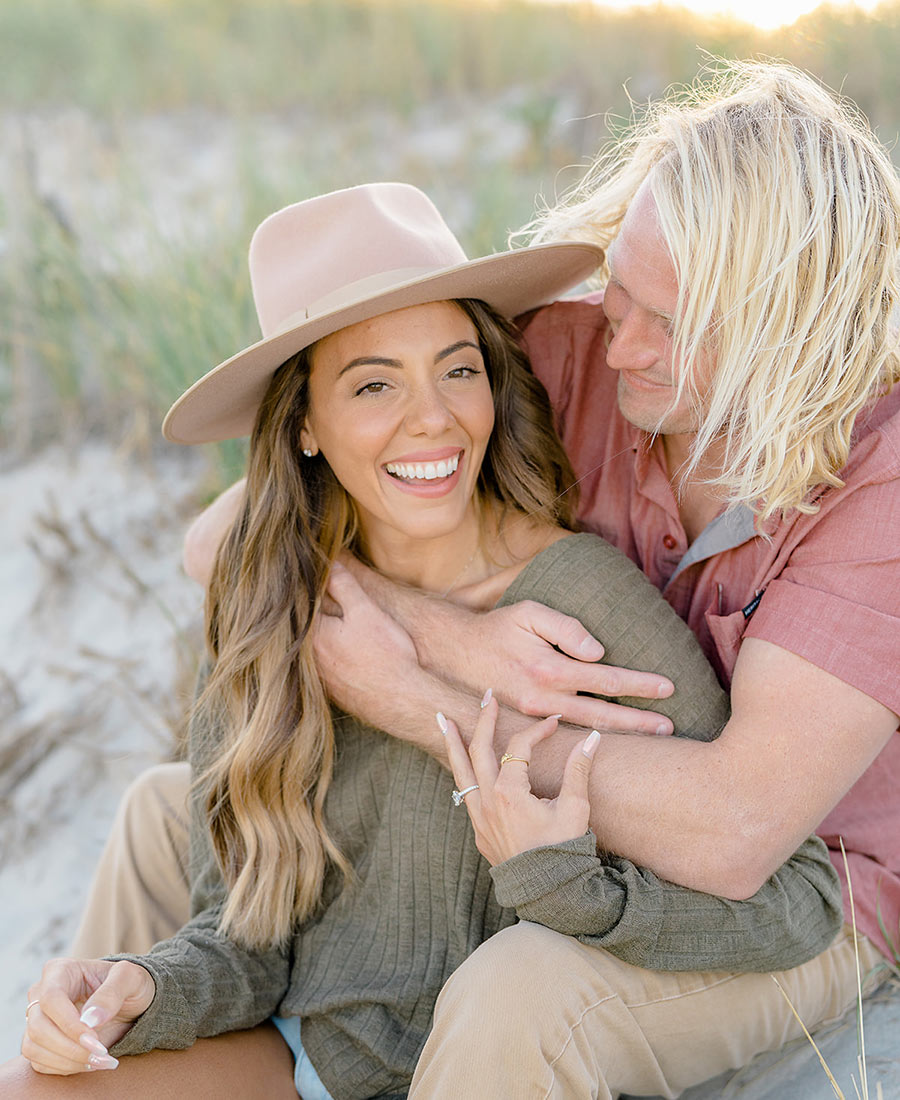 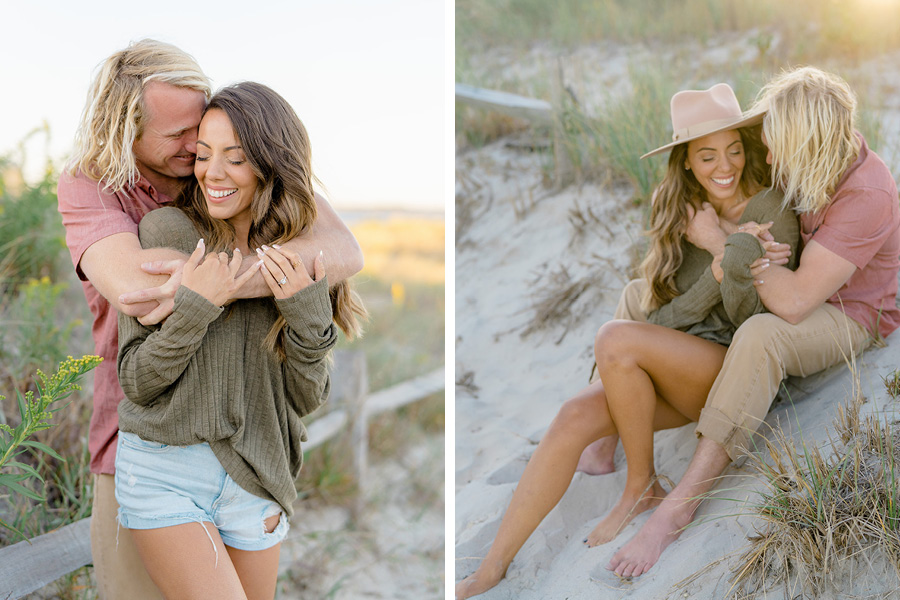 The couple: Jordan Verni, a 31-year-old freelance marketing and content creator from King of Prussia, and Ben Gravy (Graeff), a 32-year-old professional surfer and Youtuber who lives in Margate City.

How they met: Both Ben and Jordan have strong connections to the Shore. Ben moved to Longport when he was 14 to surf full time, and Jordan spent her summers going to Brigantine. They had many mutual friends, but their paths never crossed — that is, until Jordan happened across Ben’s Instagram and left a comment. Ben answered with a direct message. The duo began chatting on social media; they learned they shared a love of coffee and sitting on the beach, and their first date over Memorial Day weekend included both. They were together often over the next few weeks, soaking up each other’s company before Ben had to head to California for a monthslong gig. Rather than wait, he booked Jordan a flight to the West Coast for the Fourth of July. “It was the craziest thing both of us had done for love, but we knew we didn’t want to be apart,” says Jordan. 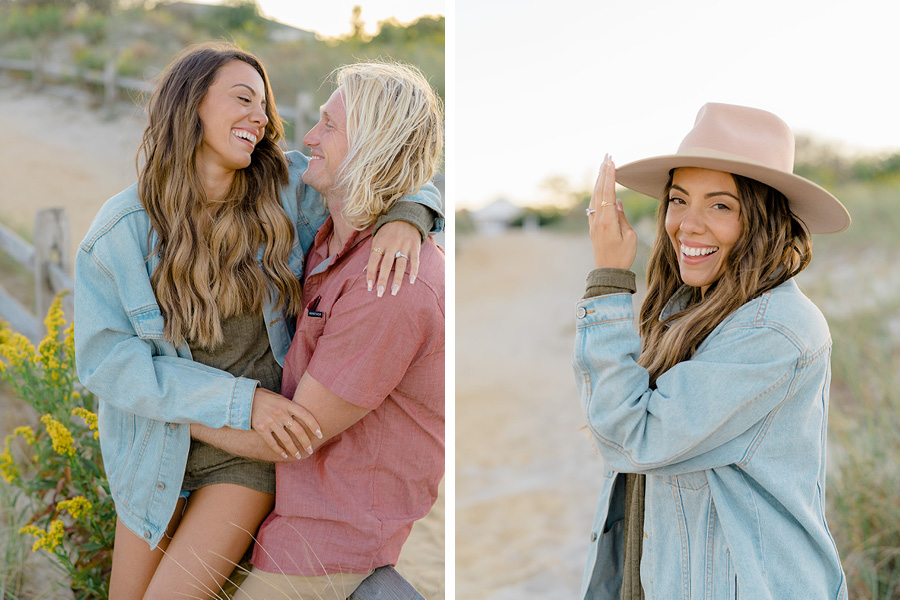 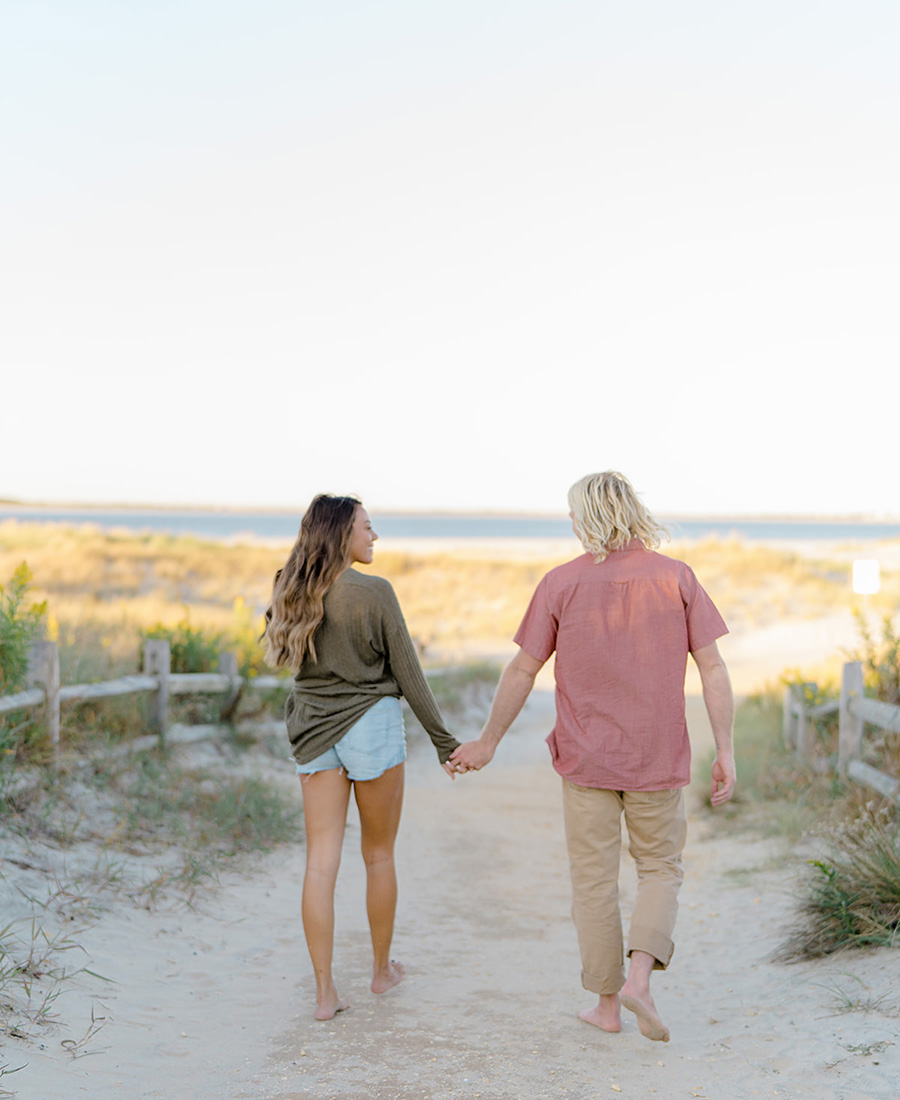 Their proposal story: Ben and Jordan dated for four and a half years before he popped the question on September 18, 2020, a few days before Jordan’s 31st birthday. He’d been planning since the summer and documented it from start to finish on his YouTube channel. He told Jordan he had a surf trip to New England on her actual birthday, so he wanted to celebrate ahead of time by taking her on a boat. He also treated her to a mani-pedi. While she was getting pampered, Ben tackled the final touches with his mom. They picked up flowers for an arbor he’d purchased, and he bought 20-plus pineapples to decorate the walkway. The scene was set at the couple’s spot and Ben’s local surf break — El Slammo at Longport Point. Ben picked Jordan up to take her to “the boat,” but she knew something was up when they turned toward the beach; there was no dock. Then she saw his mom’s car, the arbor, the decor, and began to cry. “The final touch was when he told me he had asked my father for permission, and I totally lost it,” says Jordan.

The engagement-shoot approach: While the couple didn’t do much research on engagement shoots, they knew they wanted to do something unique to them — and head to the Shore, naturally. Photographer Magi Fisher of Magdalena Studios recommended a beautiful beach in Ocean City that Ben and Jordan frequently surf at, and they agreed. 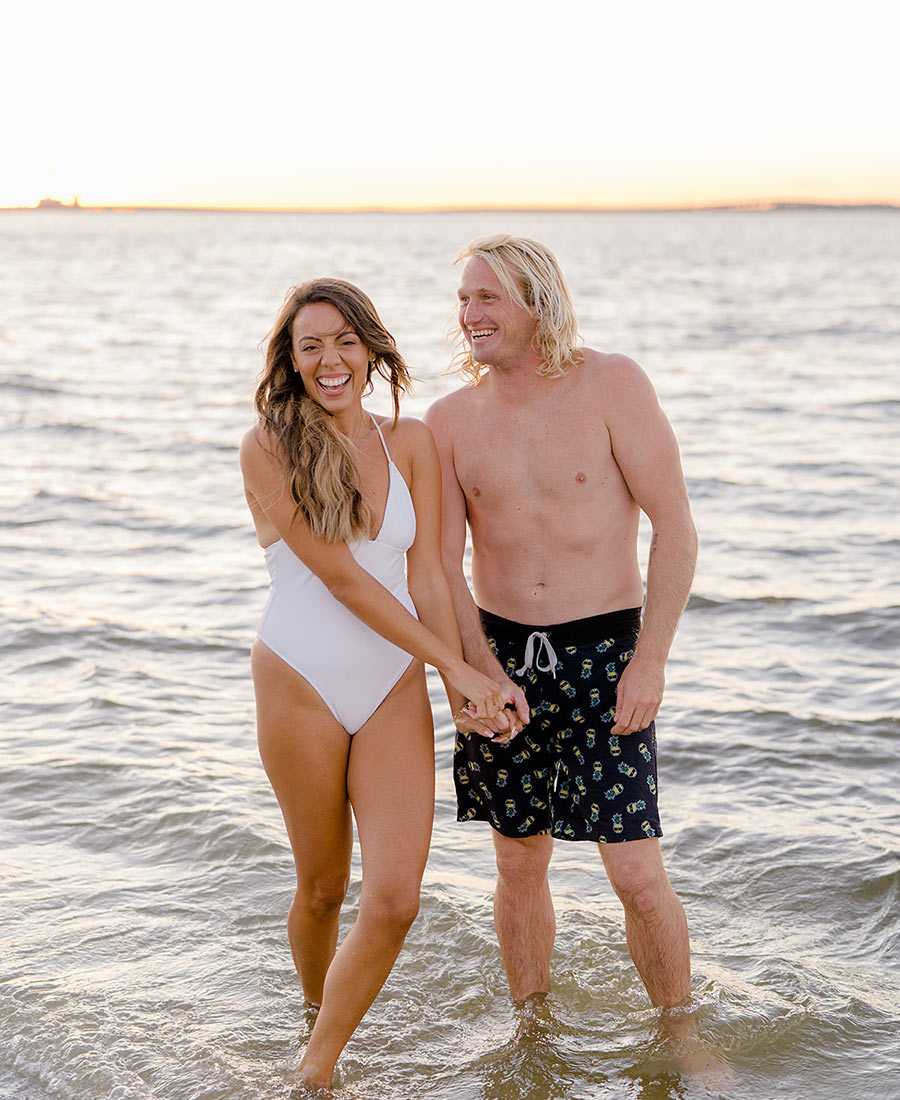 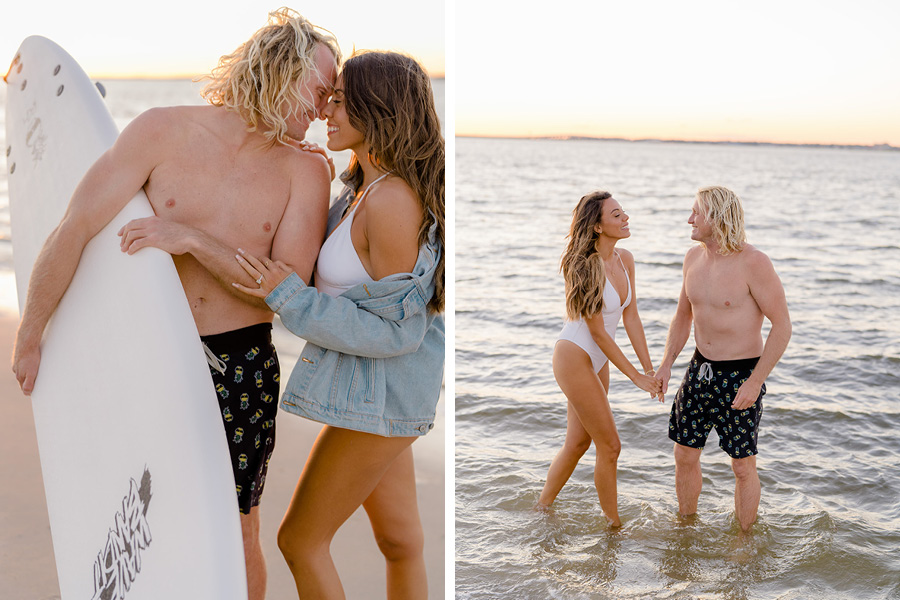 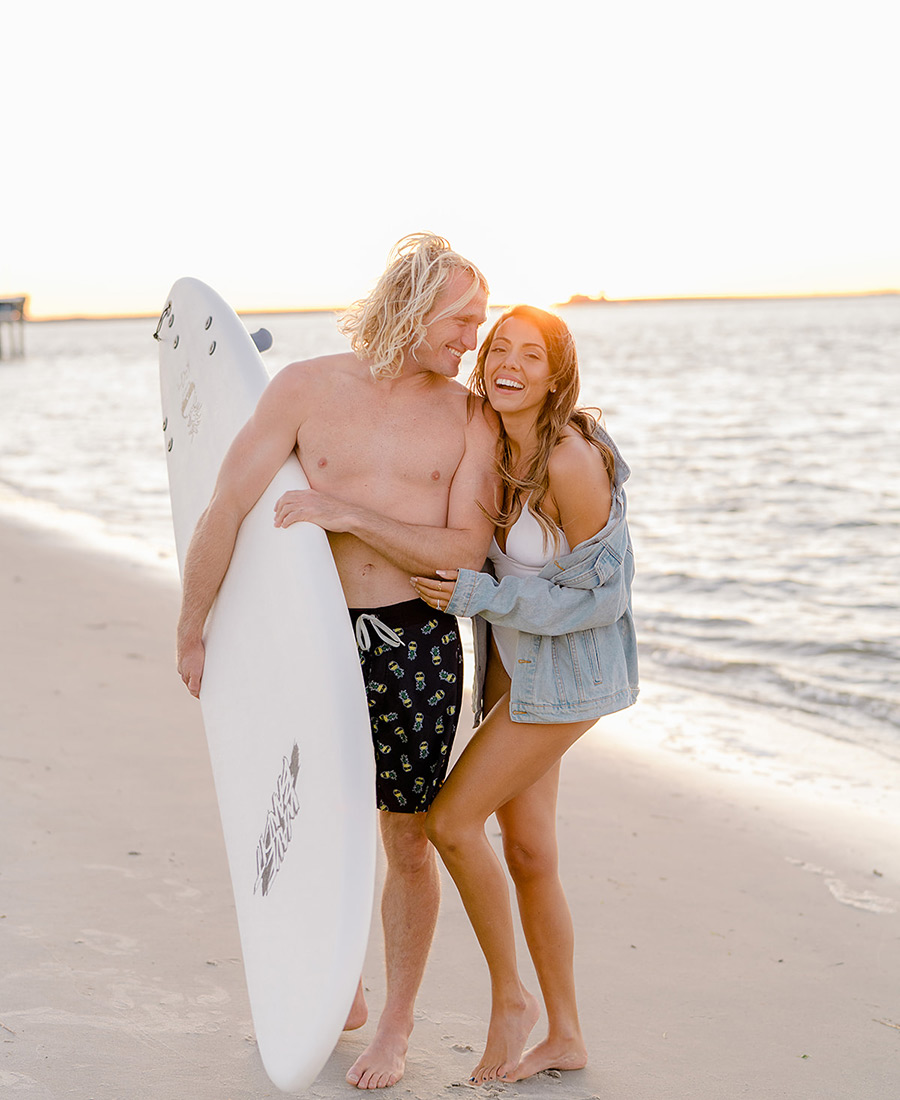 The attire: They wanted to keep things casual and chose laid-back looks. For their first set of shots, which captured them lounging on the sand, Jordan sported her favorite green sweater, jean shorts and jacket, and a hat, and Ben wore khakis and a button-up shirt. “It was very simple — the way we like it,” says Jordan. “The first photos came out so amazing and captured the love and excitement we have for this next chapter.” For the next photos, they hit the water at a nearby beach. Jordan donned a new white bathing suit, and Ben wore pineapple board shorts from his Wave Bandit collection. His eight-foot surfboard made an appearance, too. The photos were fun and playful; they jumped in the water and laughed through it all. “The beach and ocean is our happy place,” they say.

A prickly twist: The Jersey Shore and the dunes are filled with prickers, and the couple ended up covered in them when they tried to nail a shot by scaling a fence. On the other side, prickers got stuck to their clothes and in their feet. “At one point I was screaming in pain, but it was all worth it,” says Jordan. 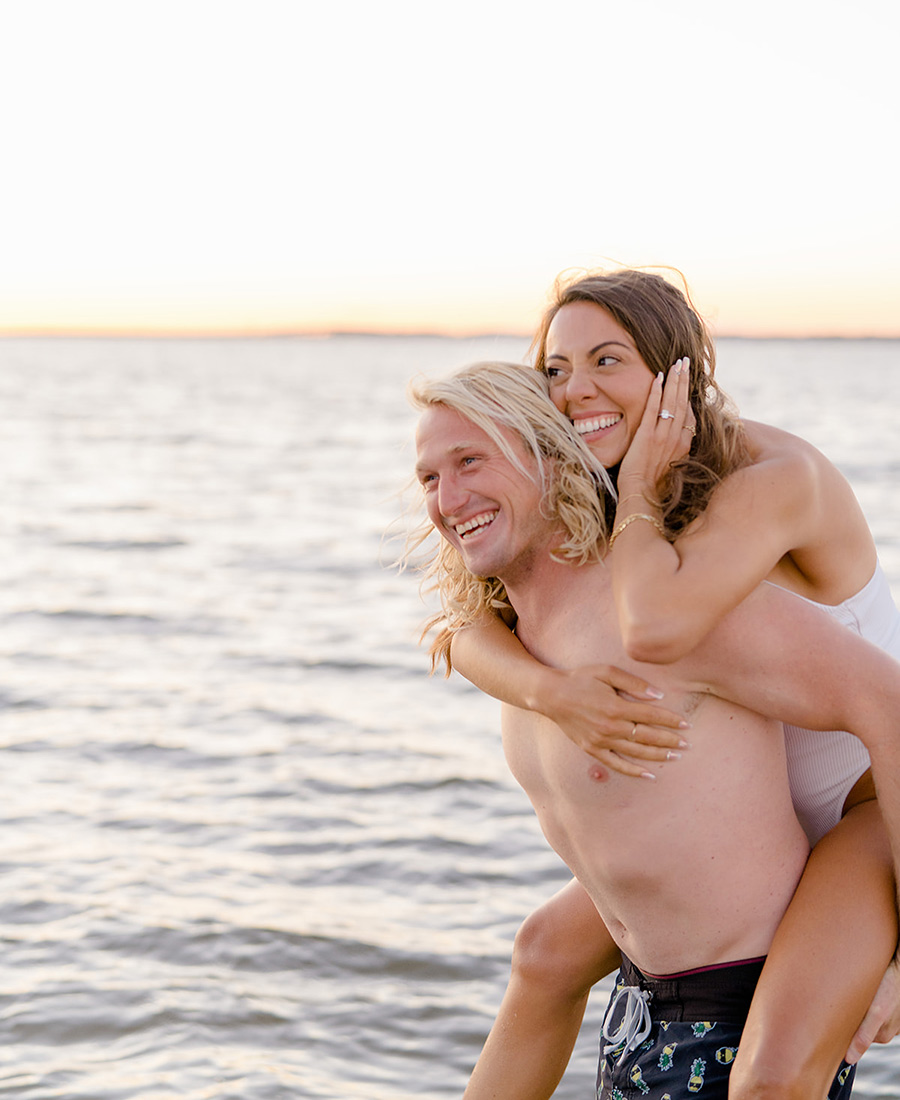 The Big Day plans: The couple plans to get married at The Ritz-Carlton Philadelphia on November 20, 2021. Evantine Design will handle the flowers and planning, while Magdalena Studios will once again capture it all on camera. Jordan bought her Galia Lahav dress at Bridal Reflections in NYC. And the couple is excited. “I fell in love with The Ritz and always wanted to get married around the holidays: There’s just something special about the city,” says Jordan. “We wanted to do something that no one expects from us, and we have a lot of fun surprises planned for our guests.”