The couple had a Buddhist ceremony in front of the stage. 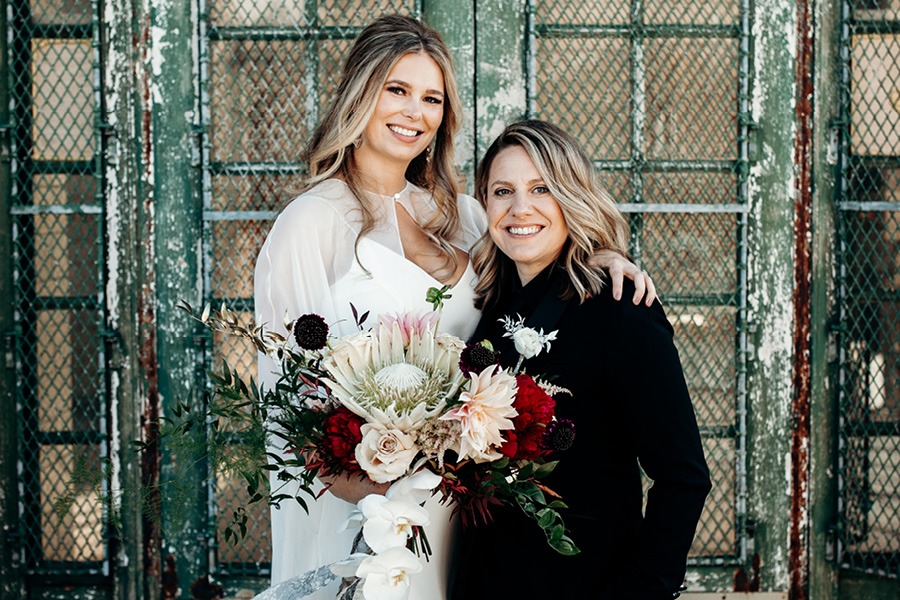 Philadelphia couple Tracie Palmer and Cynthia Schmitt held their spiritual but modern wedding at the Bok Building. Photography by We Laugh We Love

Philadelphia’s own Bok Building remains one of our favorite wedding playgrounds, filled with eclectic but cool spaces, historic enclaves and other details that let a couple put their own spin on their Big Day, from traditional to modern, and, perhaps, a little of both. And that’s what this beautiful duo did for their soulful celebration, with its spiritual sensibilities, Buddhist ceremony and moving, contemporary character. Share in the experience through the photos by We Laugh We Love and story below. 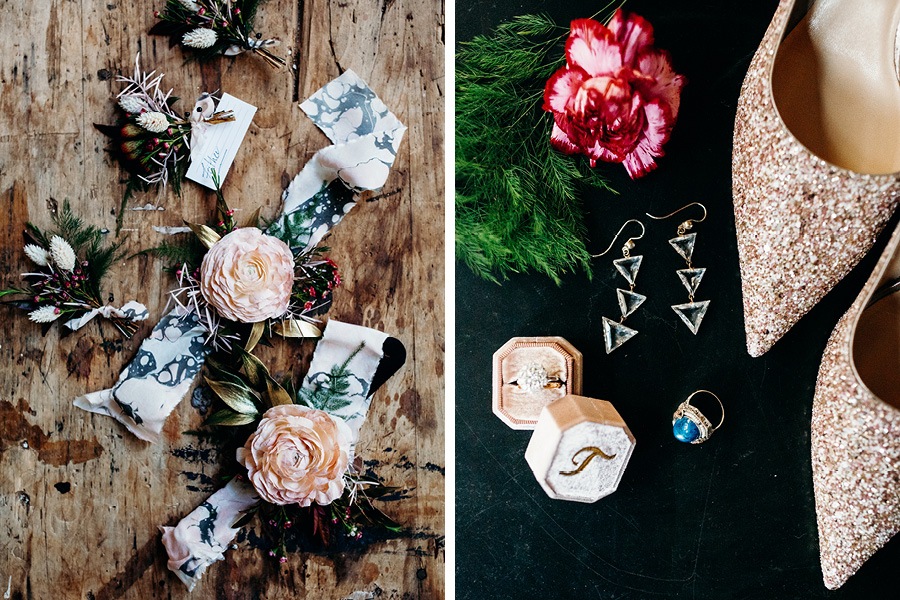 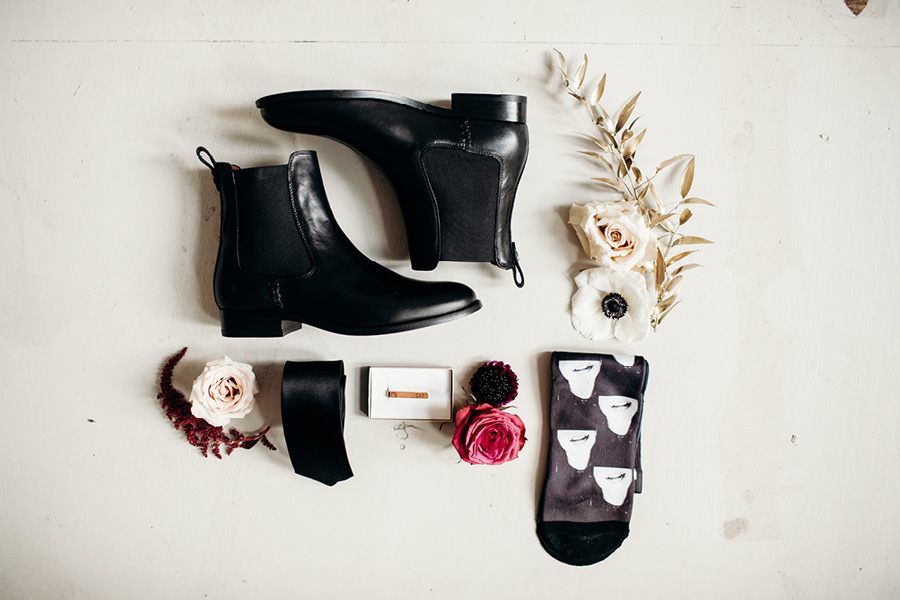 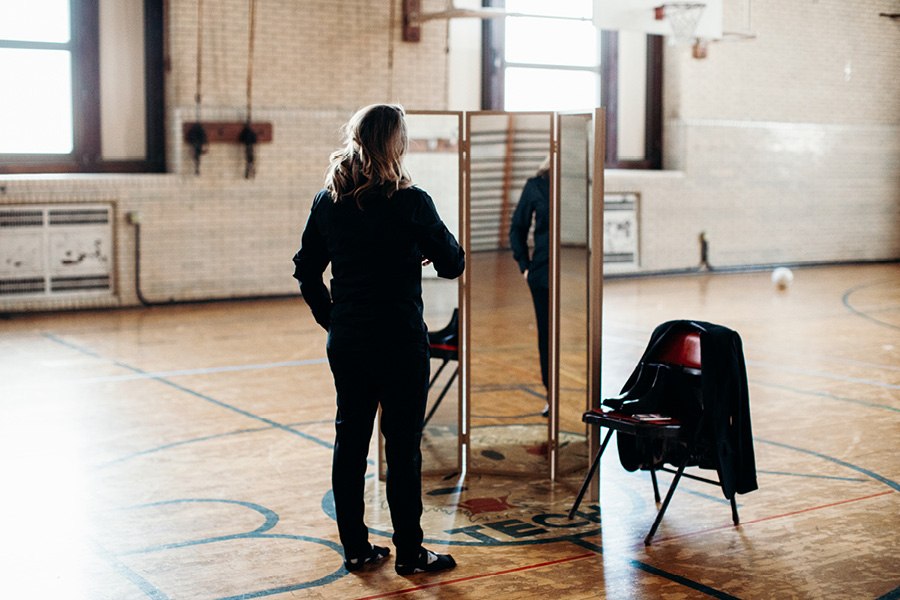 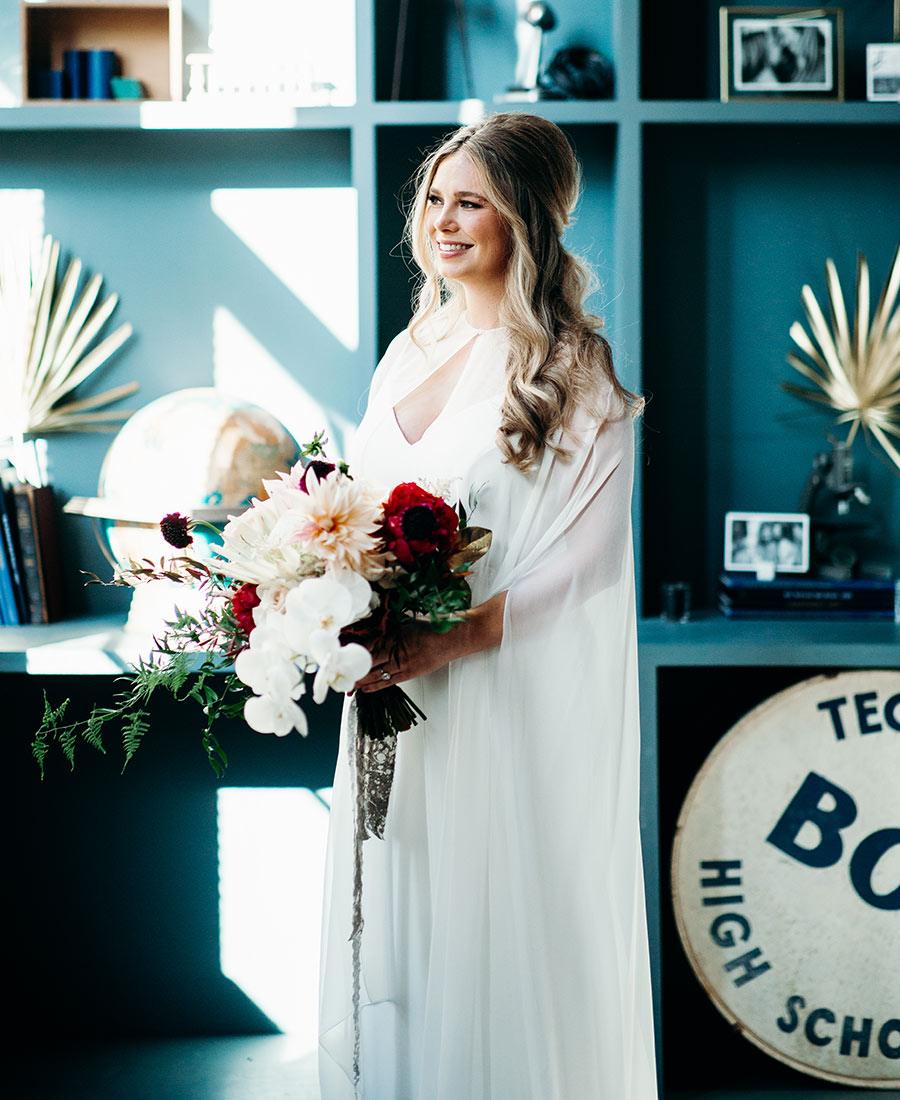 Tracie Palmer felt Cynthia Schmitt’s aura from the moment they met. “She has a presence,” says Tracie, a trial lawyer with Kline & Specter. “There’s this energy that draws people to her.” Cynthia, director of UX Teams at EY Design Studio, was equally enchanted. “It’s hard not to notice when Tracie walks into a room,” she says. “She’s stunningly beautiful.”

They first crossed paths at a mutual pal’s karaoke birthday party; both were in relationships at the time, but they became instant friends. A little more than a year later, they began to date, dining out from Philly (they love food and the local restaurant world) to Paris, where Cynthia proposed on a bridge overlooking the Eiffel Tower, with a photographer and violinist to set the scene — and a celebratory lunch to follow. 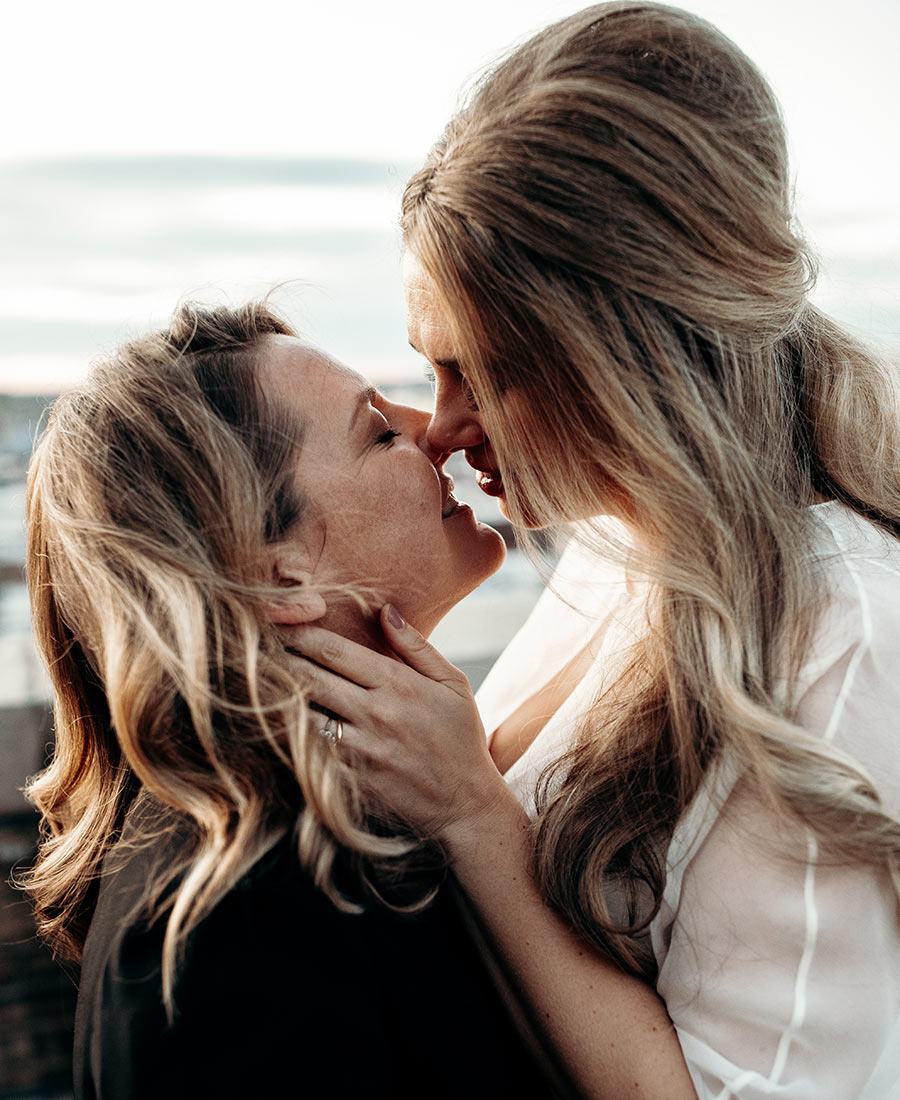 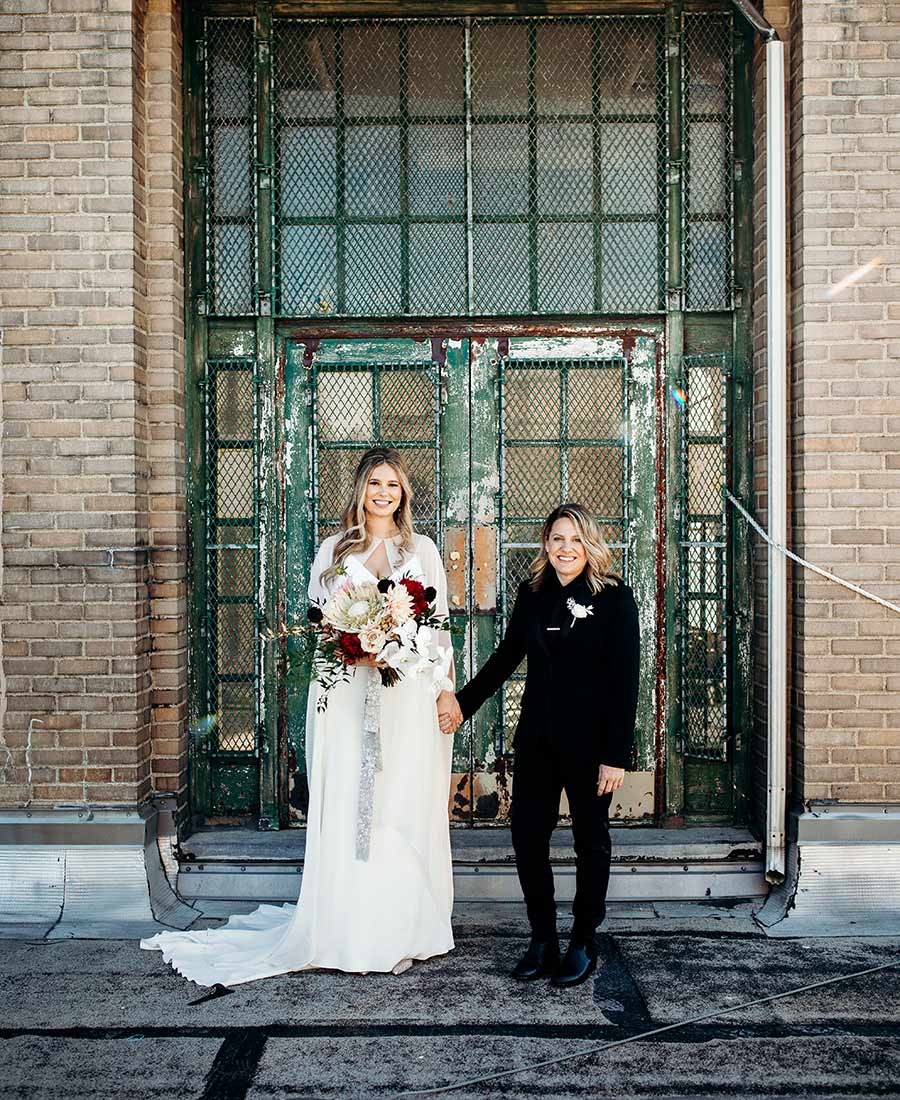 “The behind-the-scenes logistics are almost as impressive as the proposal itself,” says Tracie. “We had to move the trip not once, but twice, which meant Cynthia had to reschedule two photographers and a violinist. She also rescheduled one final time when rain was forecast.”

Six months later, on November 9th, they were wed at the Bok Building — a perfect choice for the pair, who live within walking distance and frequent it often. They didn’t initially plan on first-look photos but ended up changing their minds and had a blast running around Bok for pictures. “On our wedding day, Bok’s event coordinator … showed us all the places we didn’t know existed: secret balconies, unused floors,” recalls Cynthia, who wore a sleek style by Little Black Tux. (By the way: The custom jacket lining matched the insides of the envelopes created by Papertree Studio for the stationery suite.) Tracie, meanwhile, wore an ethereal Alexandra Grecco dress and cape from Lovely Bride New York for the ceremony, and later slipped into a Theia number, from Lovely Bride Philly, for the reception. “It felt uniquely Philly to carry Tracie’s train as we stepped over wood planks on dusty floors to get to our next spot,” adds Cynthia. 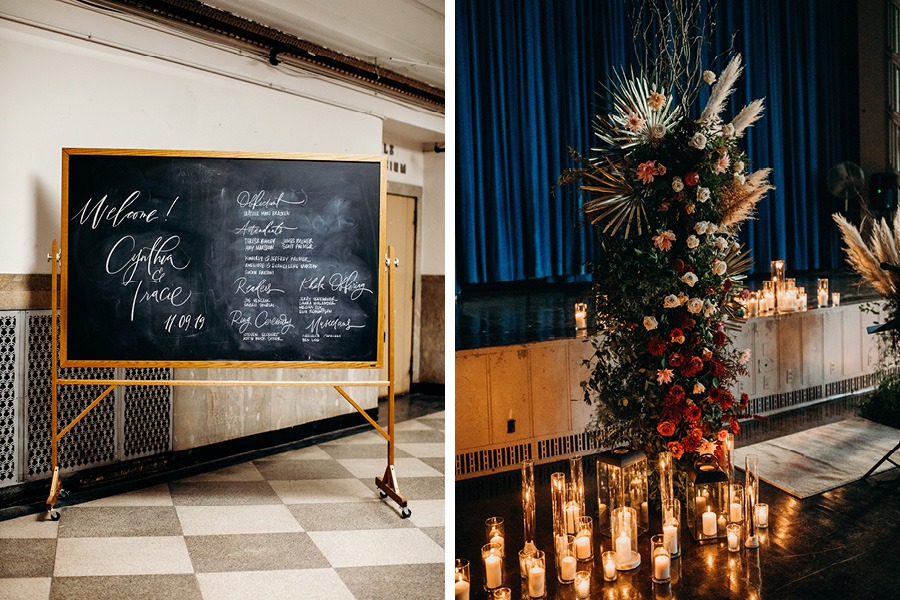 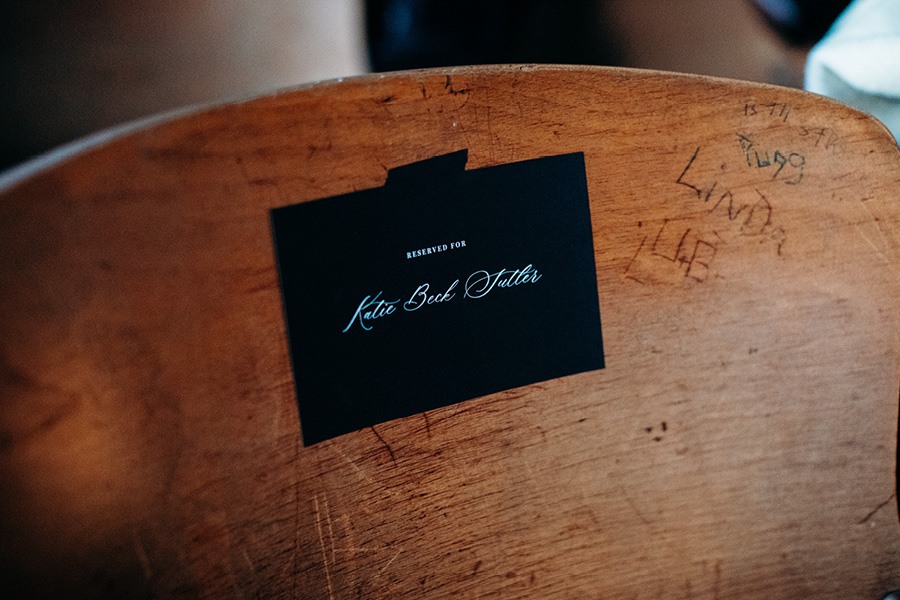 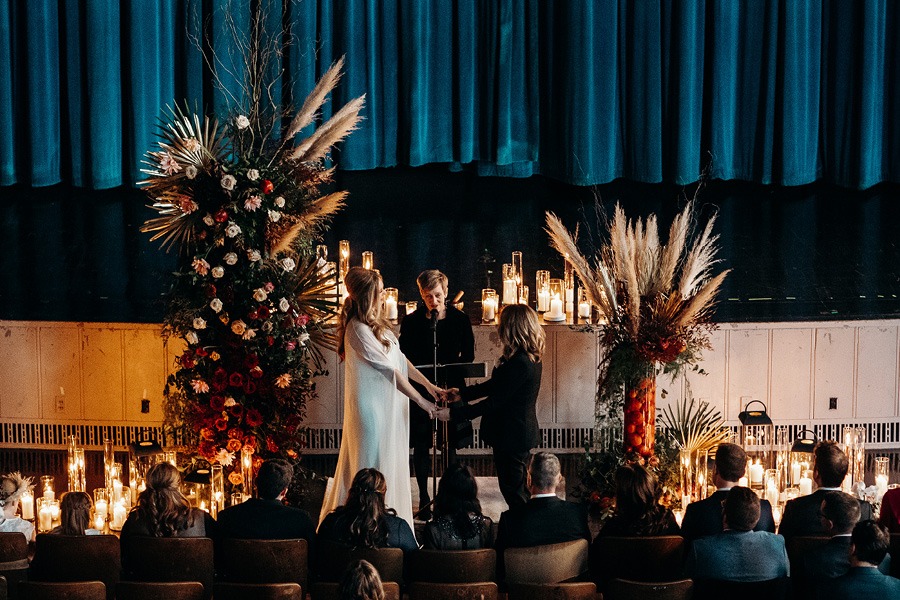 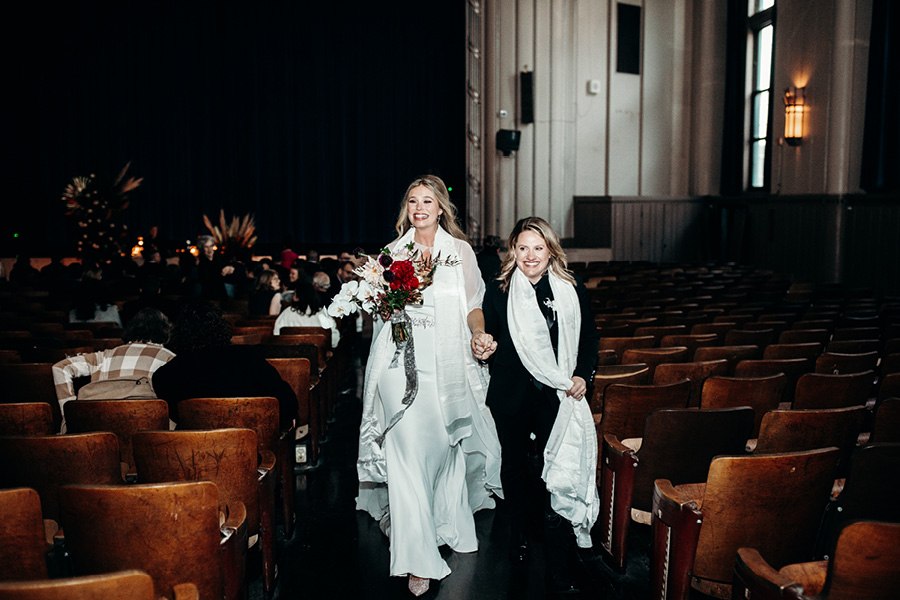 The setting had an air of mystery befitting the couple’s spiritually driven celebration, which included a Buddhist ceremony (Tracie practices in the Tibetan tradition) and was decorated with candlelight, warm colors and textures, celestial moon prints and crystals, and natural elements such as marble, gold and fur. (Bok’s historic schoolhouse elements, like a chalkboard listing the key players in the ceremony, added to the wedding design.)

The two were wed by Tracie’s meditation teacher, Heather Marg Bracken, in a celebration they created themselves that incorporated their friends, family and cultural elements; the arch featured a glass vase filled with pomegranates, a blessed fruit in the religion. Friends Ben Lee and Chelsea Cipriani performed the music. “I will never forget locking eyes with Cynthia as she read her vows,” recalls Tracie. “I felt so deeply connected to her and what we were doing. It was perfect.” 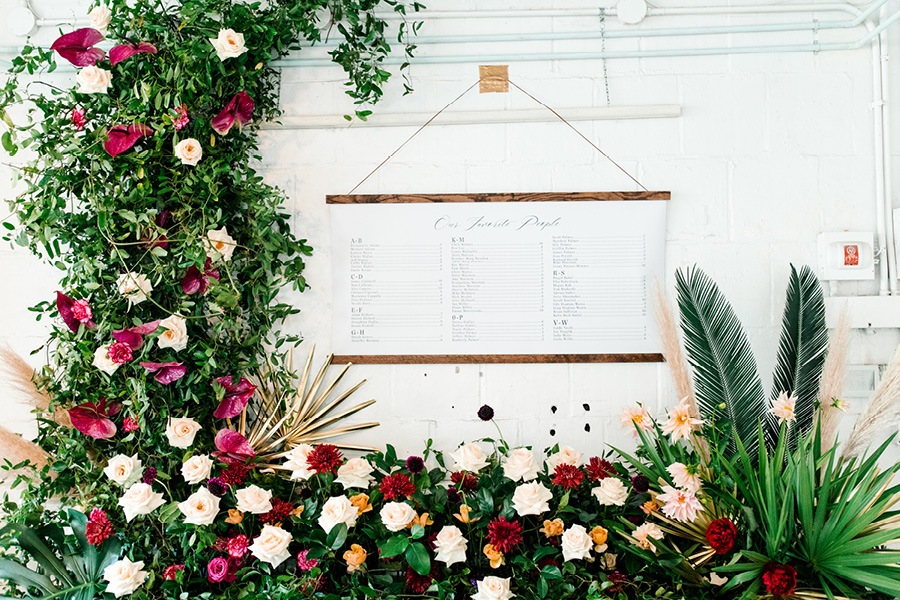 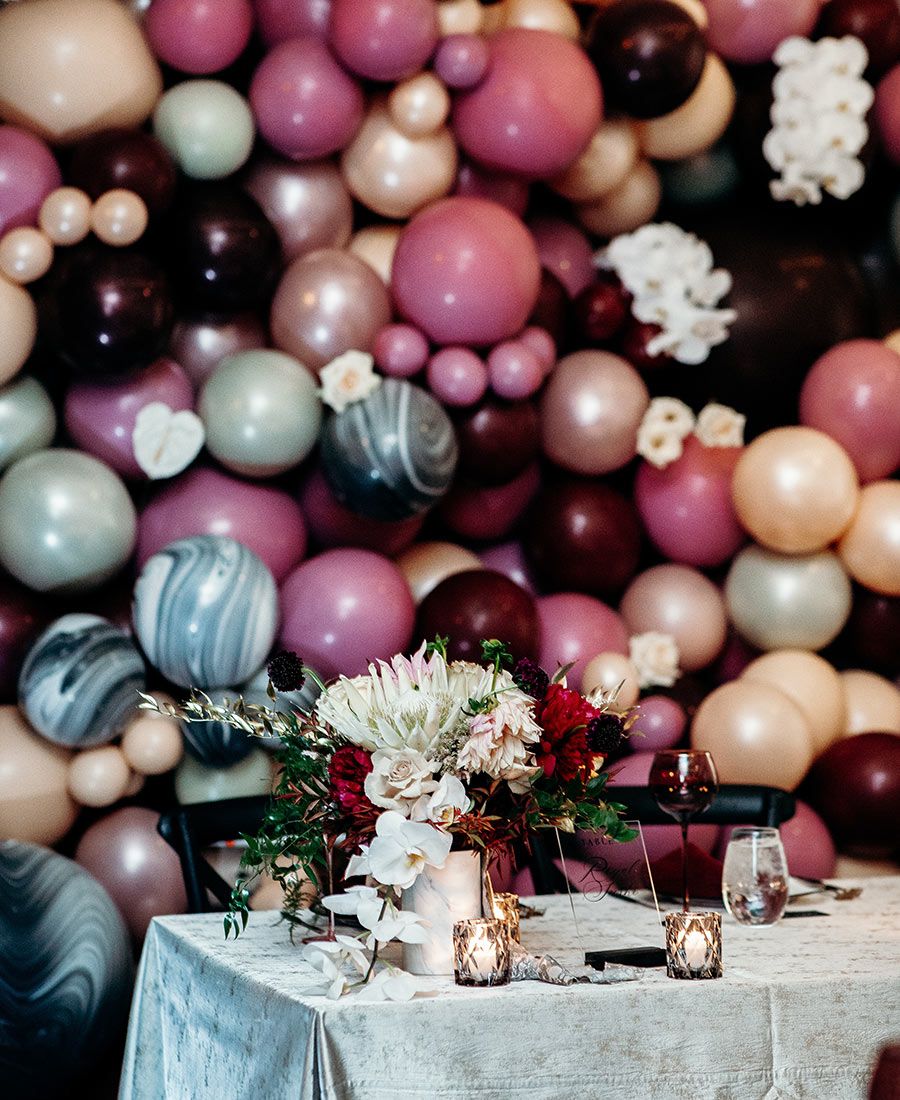 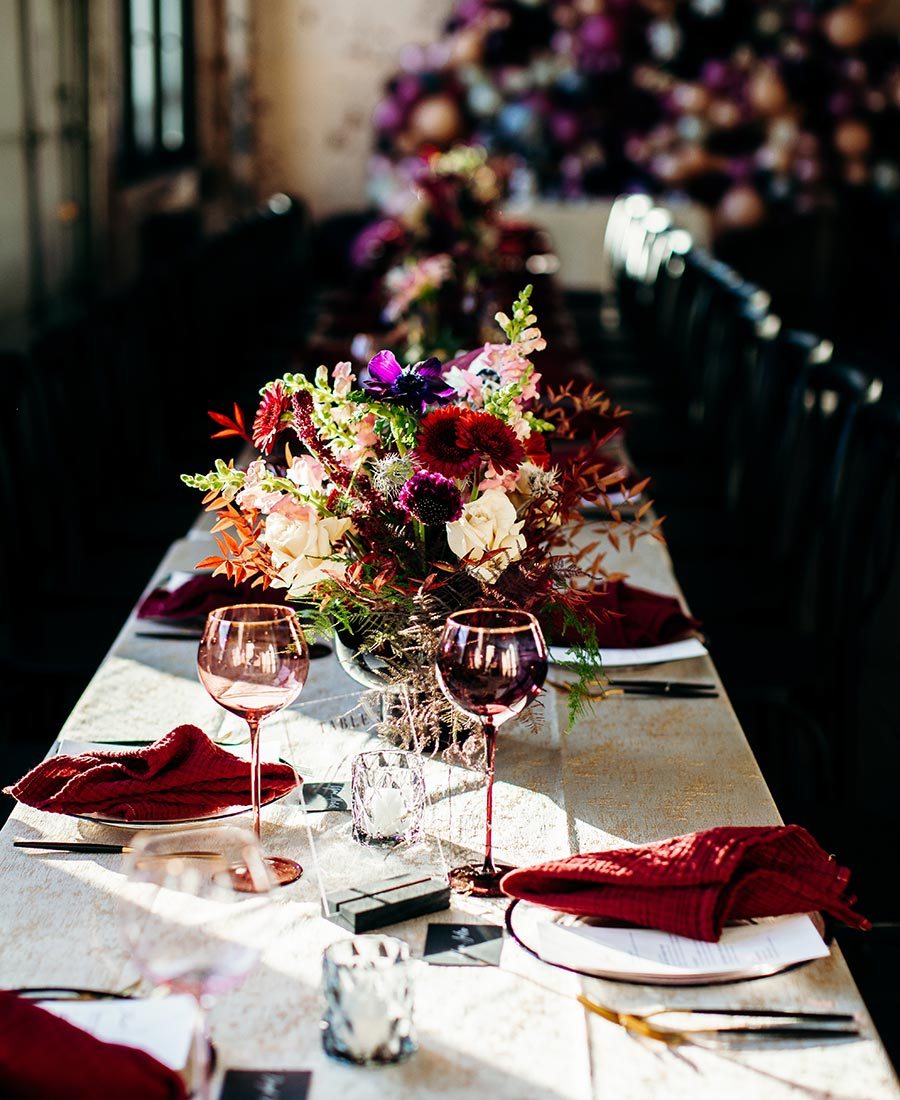 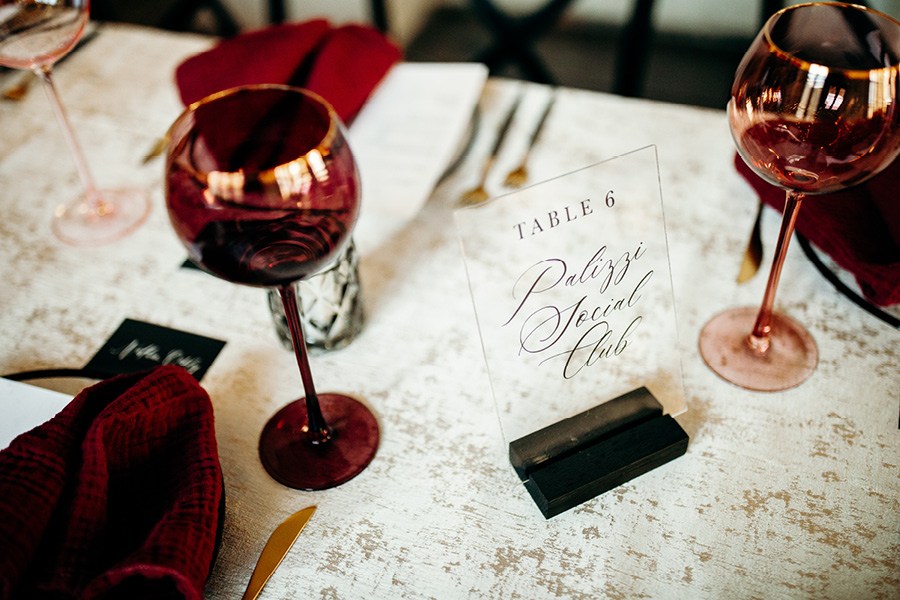 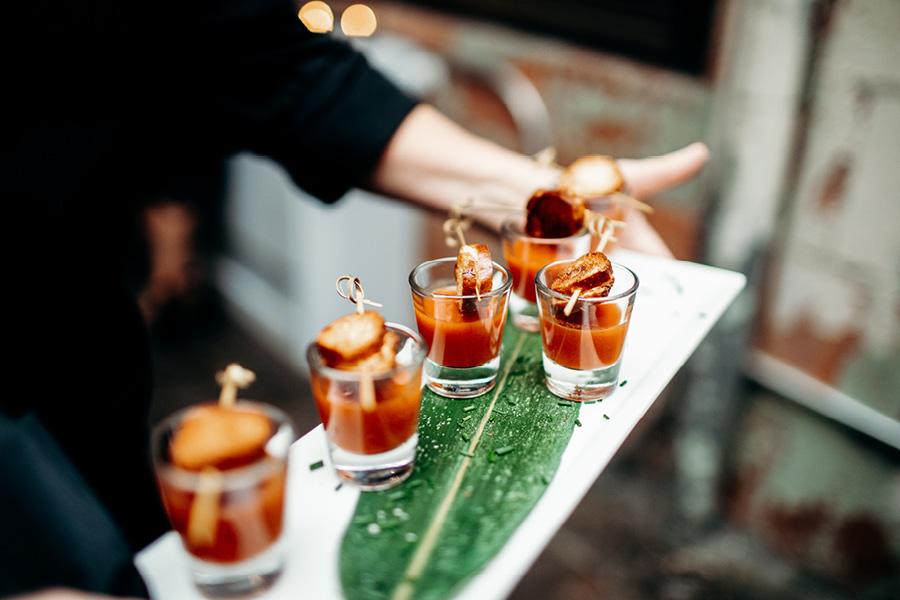 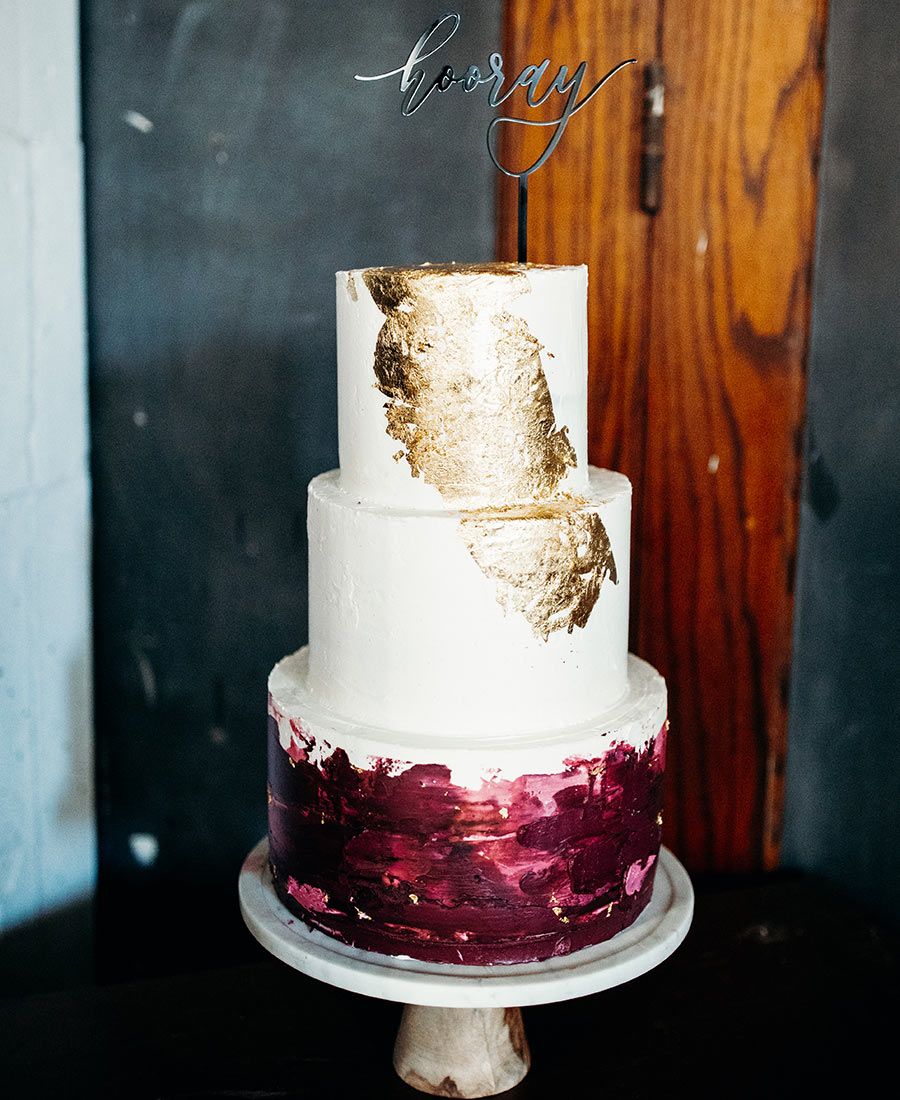 Other personal touches included a champagne cake with buttercream frosting made by friend Steven Elchert, who isn’t a professional baker (though perhaps it will be a second career!) and a bookshelf at the cocktail reception filled with photos of family. In honor of their passion for dining out, the couple christened tables after their favorite Philly restaurants, including Palizzi Social Club. The menu featured wedge salad and a choice of braised short ribs, halibut, or butternut squash ravioli. One of the couple’s best friends, Marianna Coppola of Creations by Coppola, came up with the arrangements, which mainly consisted of roses, dahlias, anthurium and protea. A highlight for the couple was the balloon installation by Florescio Events; they loved its “jaw-dropping scale and colors” and used it as the backdrop to their sweetheart table. A faux neon sign, ordered through Narwall by Sara Murray and her team at Confetti & Co., added further flirty texture. A final flourish: In lieu of wedding favors, the duo made donations in their guests’ honor to Wonderwell Mountain Refuge and the Tibetan Nuns Project before enjoying their honeymoon on the island of Curaçao.