We've got some ideas for how to make it happen. 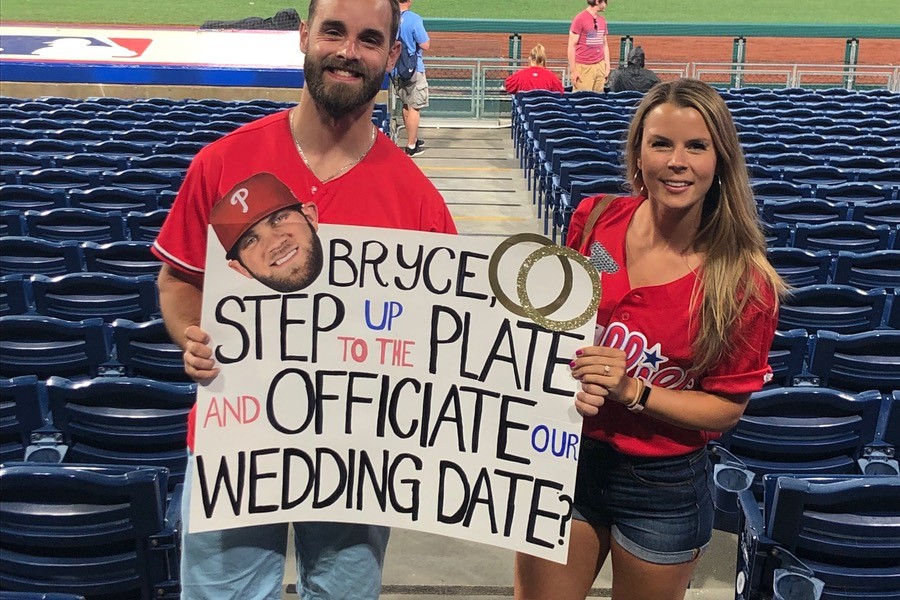 NoLibs couple Bri Higgins and John O’Donnell have a long history with the Phillies. Both grew up playing baseball and softball in their South Jersey hometown. Both have fond memories of attending the World Series parade with their fathers back in 2008. Now engaged and planning an April 2020 wedding, there’s one big thing that will take their love of the team to the next level: having Bryce Harper officiate their ceremony.

“Bryce is one of those athletes that’s really going to care about the city,” bride-to-be Bri says of their request, which she and John adorably put on a sign at a Phillies game last week. “He shows himself as a really good guy and someone who wants to support the people.”

Though the sign—which read, “Bryce, step up to the plate and officiate our wedding date?”—was featured on the Jumbotron and caught the attention of the Phanatic, Bri and John haven’t (yet) seen a reaction from Harper himself. 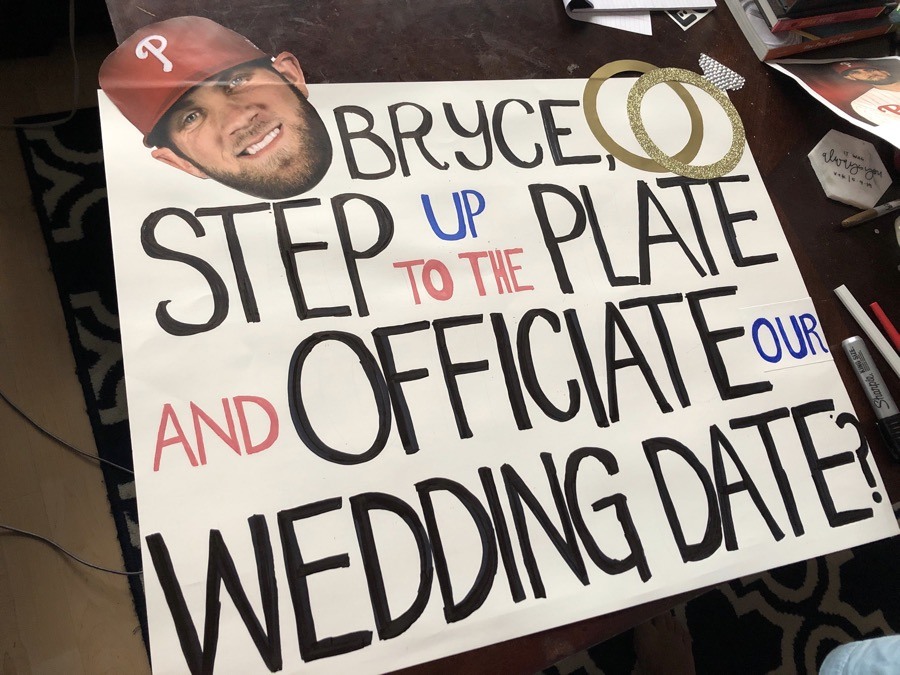 “We realize it may be a little unrealistic,” says Bri. “But we’d never say no.”

Still, does it *have* to be unrealistic? Bri is right: Since committing to a $330 million contract that effectively puts him in Philly for the rest of his career, Harper has gone out of his way to show love for his new Phamily. Per our recent profile of Philly’s newest sports star, Harper’s spring training walk-up music was none other than the Fresh Prince theme song. He’s the proud owner of Phanatic cleats. He’s even bowed to people in the bleachers. Officiating the wedding of two super-fans would seal the deal on our city’s love for the guy (or, at the very least, earn him brownie points with anyone who’s still a little lukewarm on him).

To help get Harper to the altar, we brainstormed a couple of ways Bri and John could up the ante and show their commitment. (Okay, mostly Brian Howard, our resident Bryce Harper fanatic, brainstormed). Below, his thoughts:

• Have an excellent beard game. (Thankfully John’s already got that covered.)

• Have eye black in the photo booth for Harper-inspired game day selfies.

• Use one of Harper’s walk-up songs for the bridal entrance. (Per MLB.com, options include “Bring Sally Up” by Moby, “Drunk On Your Love” by Brett Eldredge, “R.I.C.O.” by Meek Mill featuring Drake, and “Live Your Life” by T.I. featuring Rihanna.)

• Invest in Blind Barber, Harper’s barber shop, in lieu of favors. Or maybe give out Blind Barber products *as* favors?

• Dress the groomsmen in these super-fun Phillies button-downs.

• Book the Phanatic for an appearance.