If you’re wondering if there was a bouncy castle, the answer is “of course.”

Life, liberty, and the pursuit of block parties. Okay, so that’s not exactly how that part of the Declaration of Independence goes, but maybe it should — especially here in Philly. (According to a 2013 Philadelphia City Paper article, we host more street soirées than any of our peer cities.) Which is why, the moment we came this epic block party wedding in South Philly, we were kind of surprised we don’t see them more. Good food, stoop hanging, bouncy castles … it seems like the most perfectly Philadelphian way to kick off a lifetime together, don’t you think? See for yourself in the photos below by Jauhien Sasnou for Peach Plum Pear Photo. 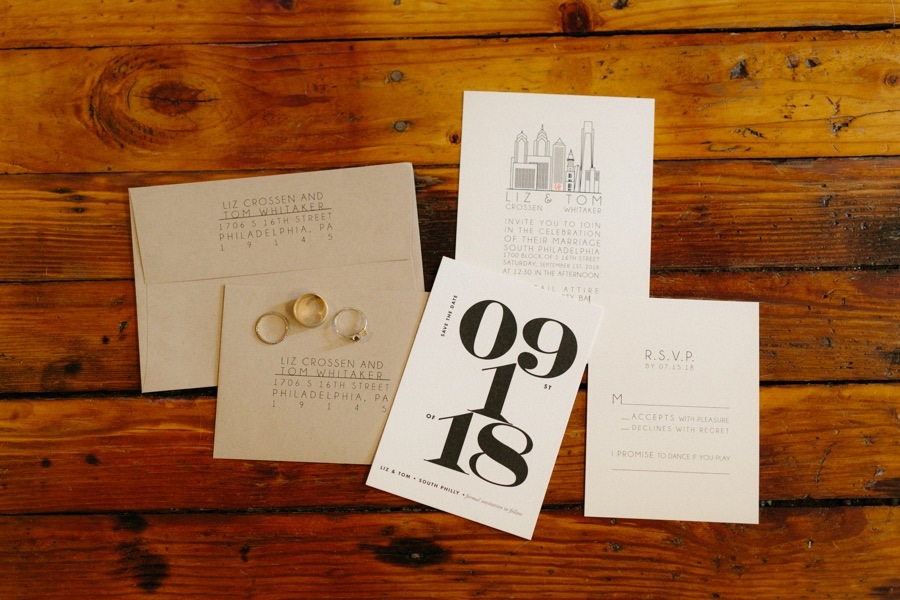 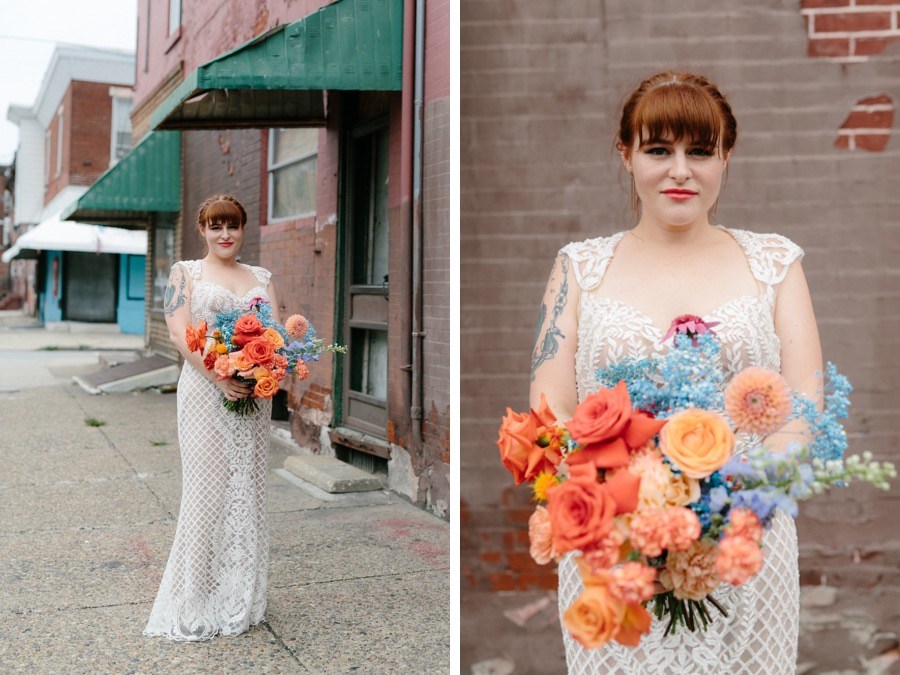 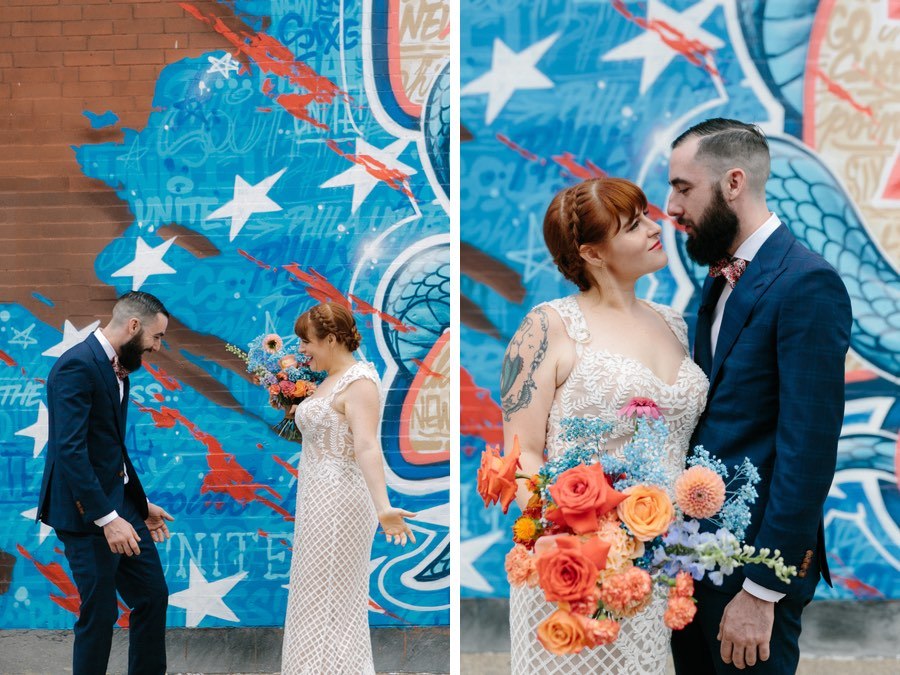 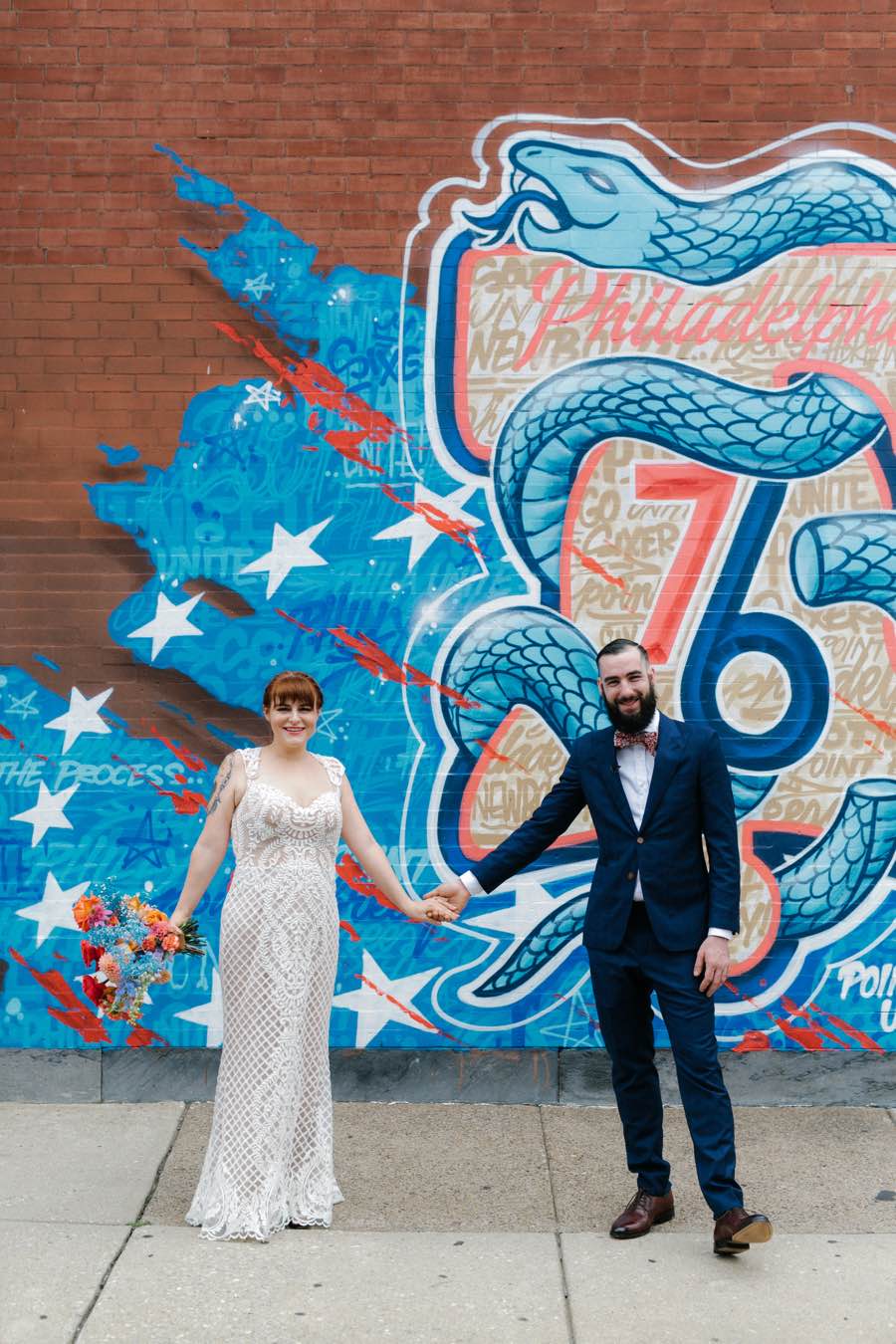 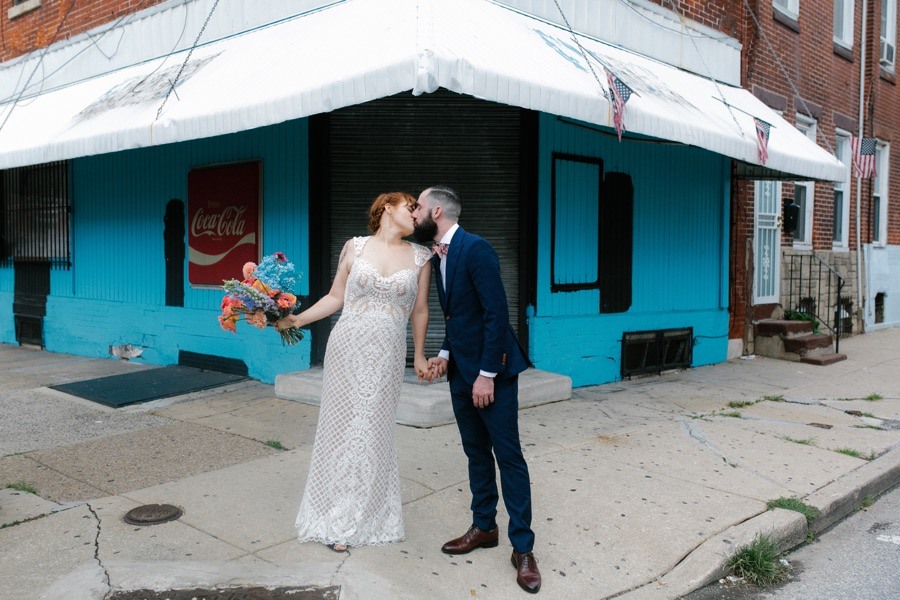 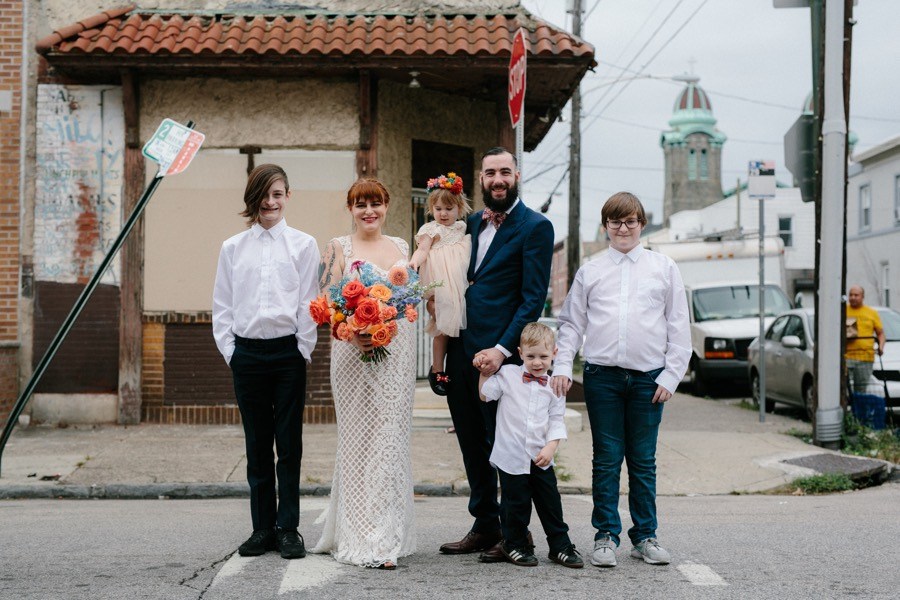 Liz Crossen and Tom Whitaker met at a mutual friend’s Quizzo night in East Passyunk. “I thought he was really nice and funny,” says the bride. “And he bought me drinks, which was definitely the way to my heart at the time!” 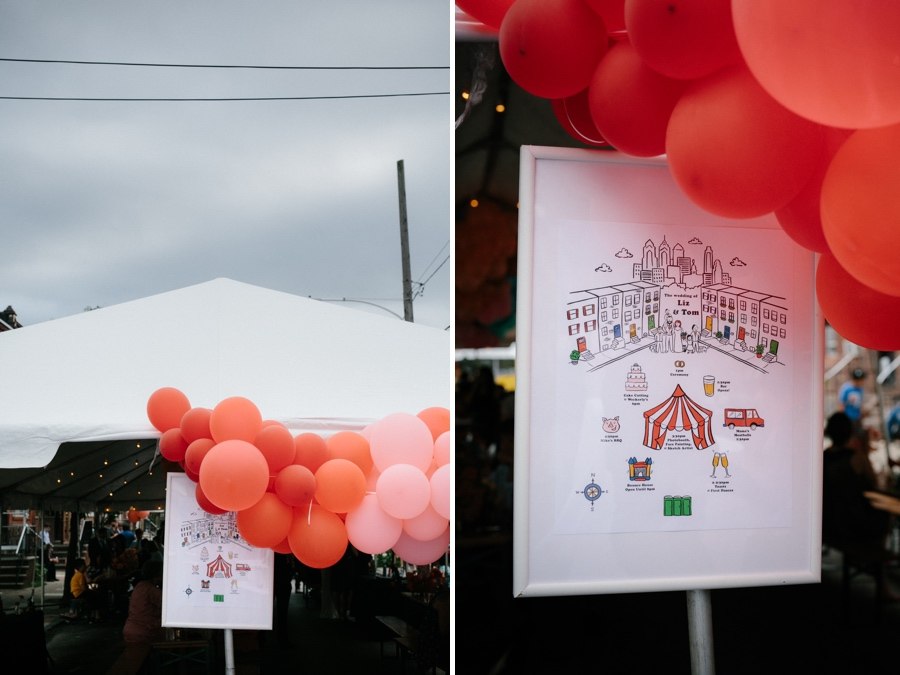 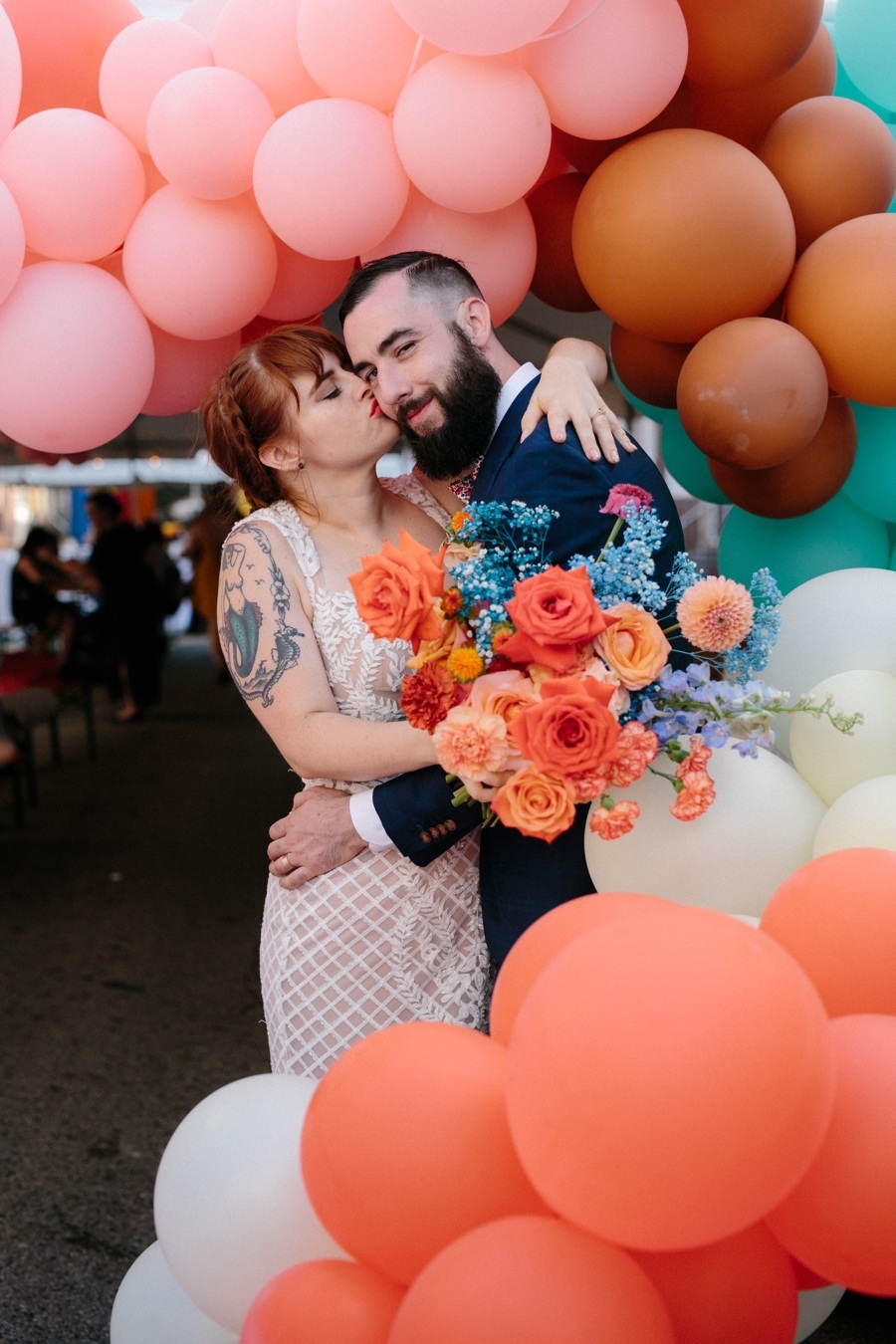 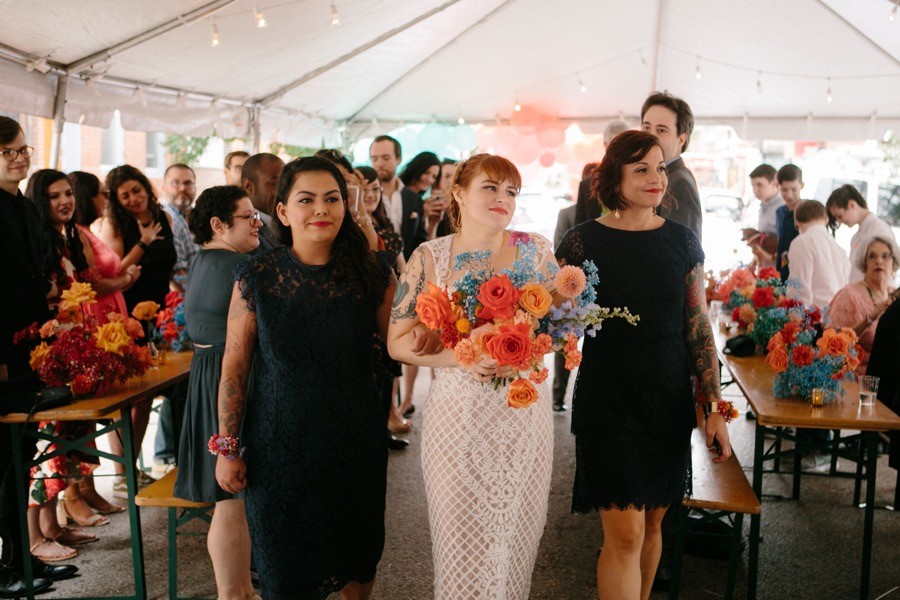 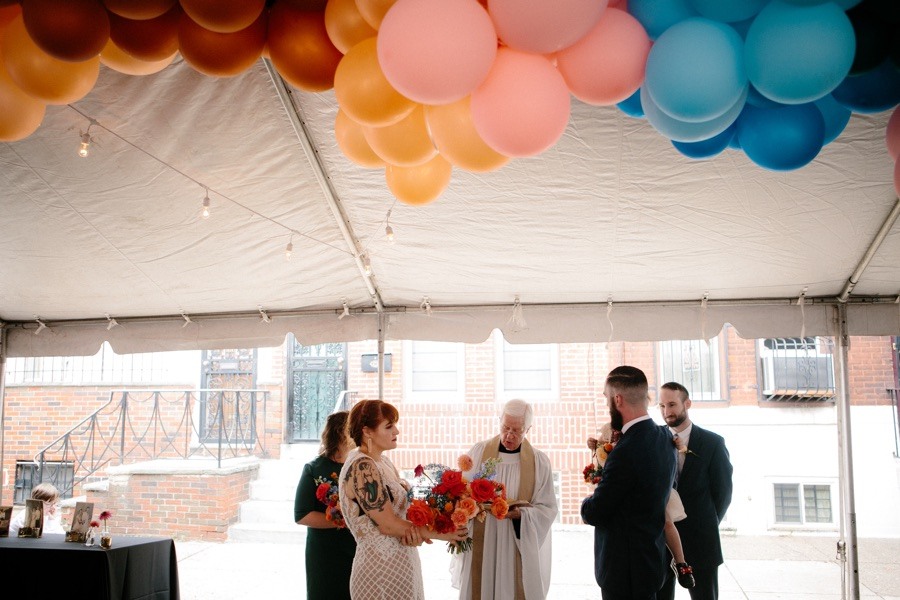 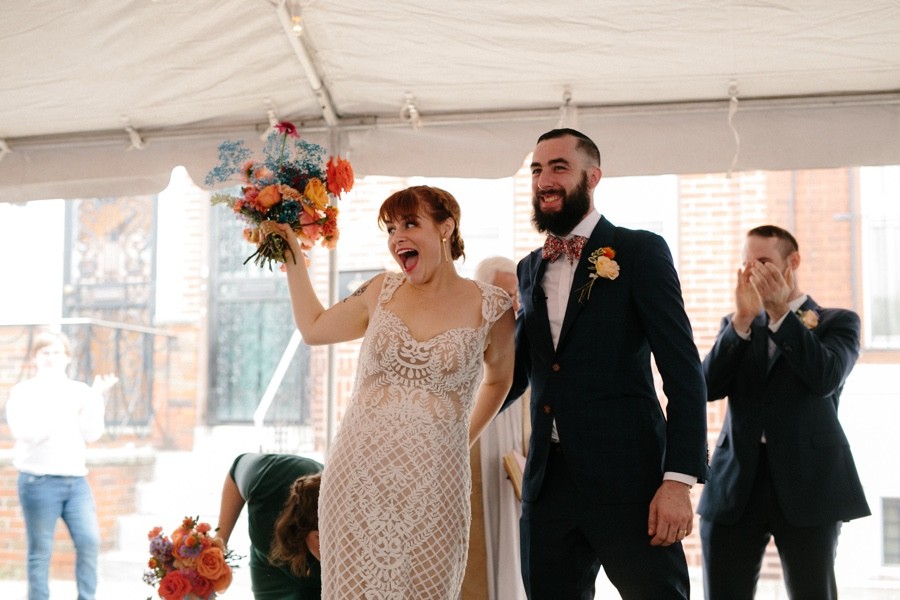 Their lives intertwined easily, and over the course of four years the couple went on to share a bank account, a South Philly row home, and two children together. That they were heading towards marriage wasn’t unexpected — they bought Liz’s Bario Neal engagement ring together — but the proposal still took Liz by surprise. 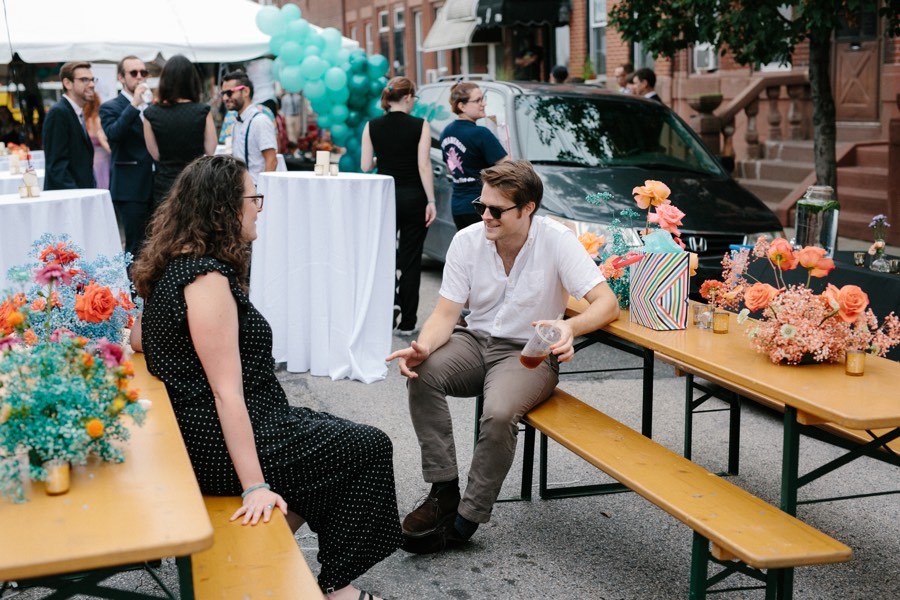 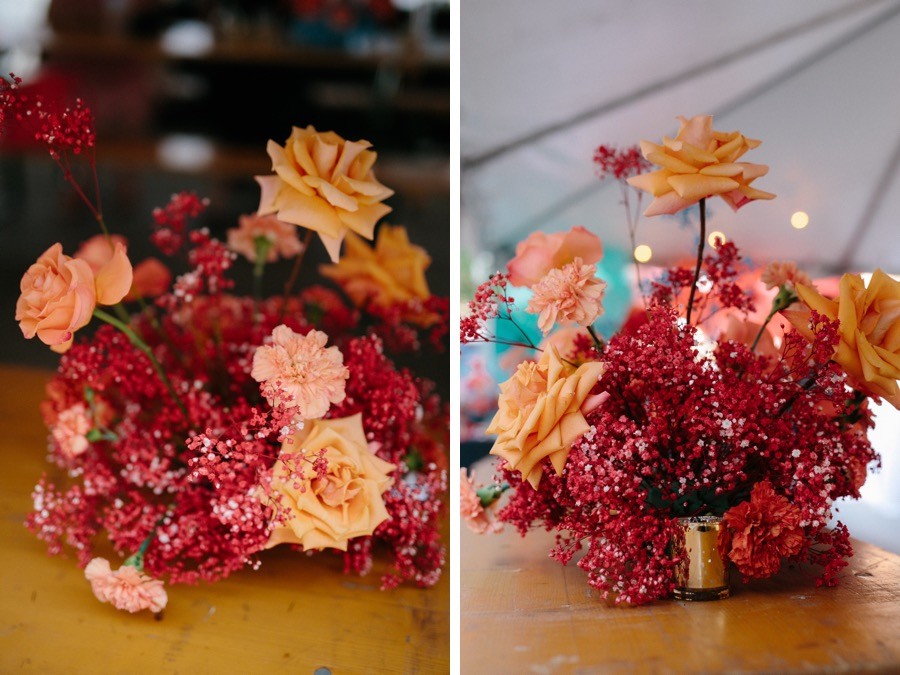 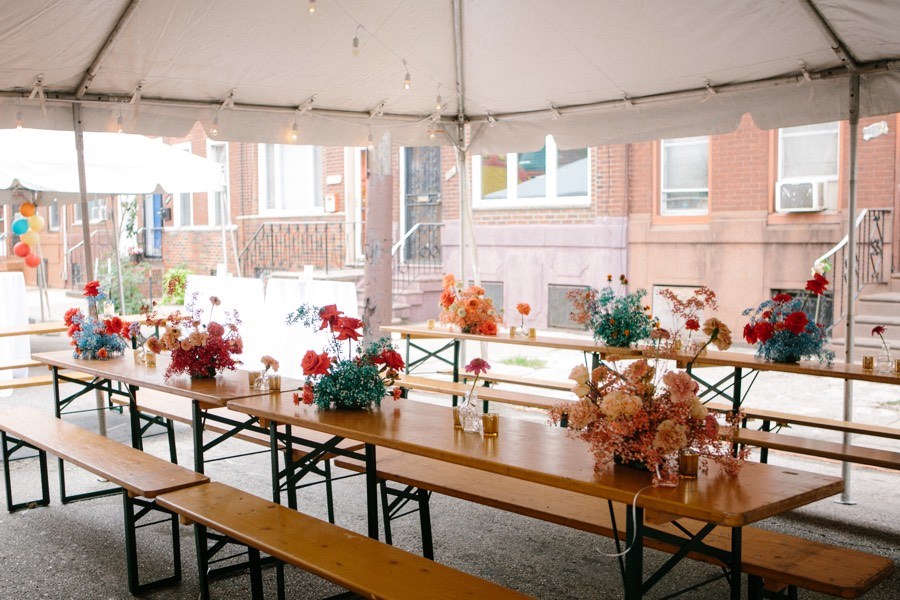 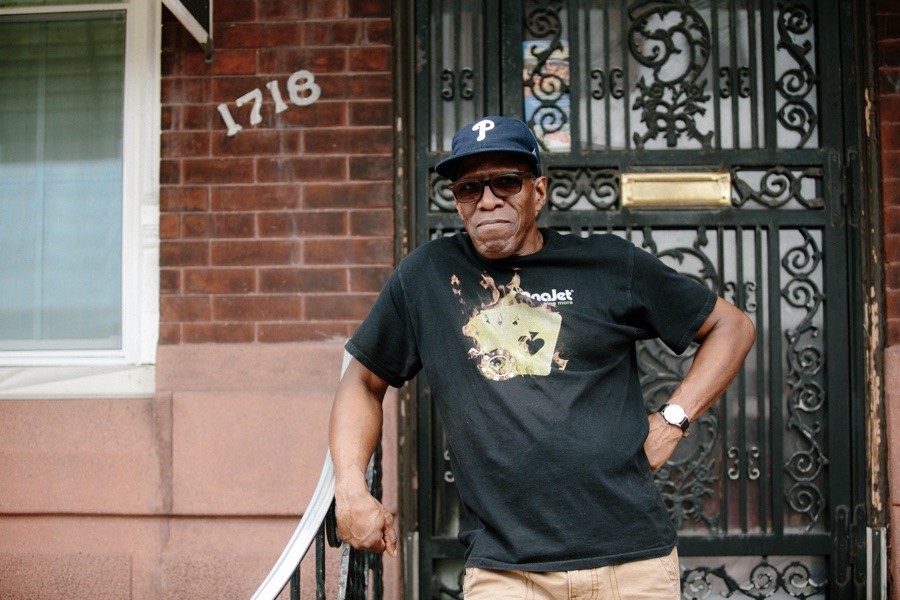 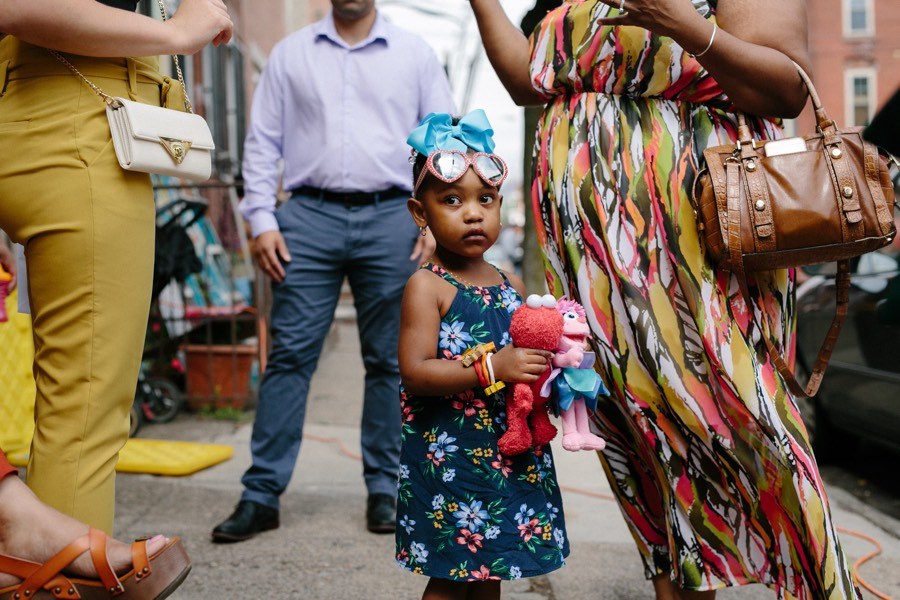 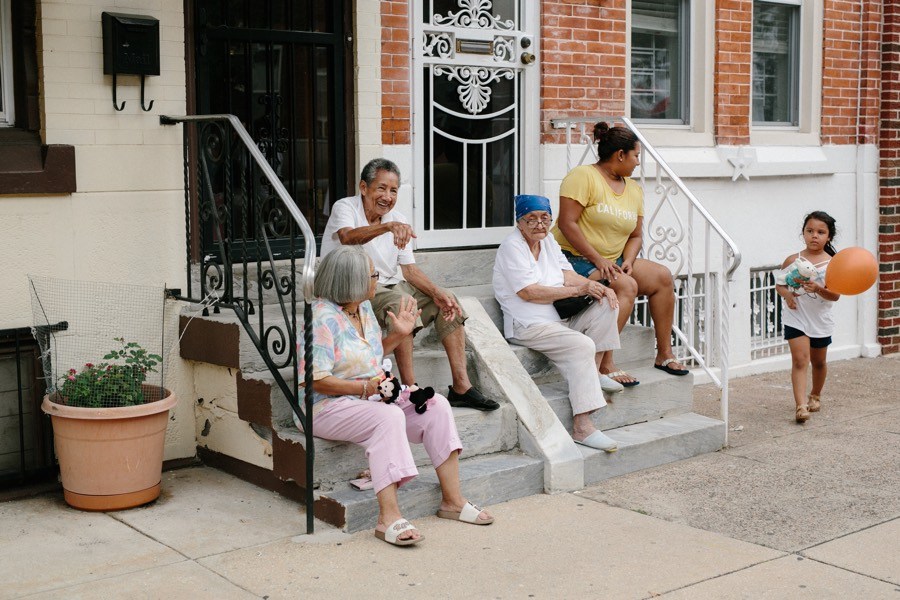 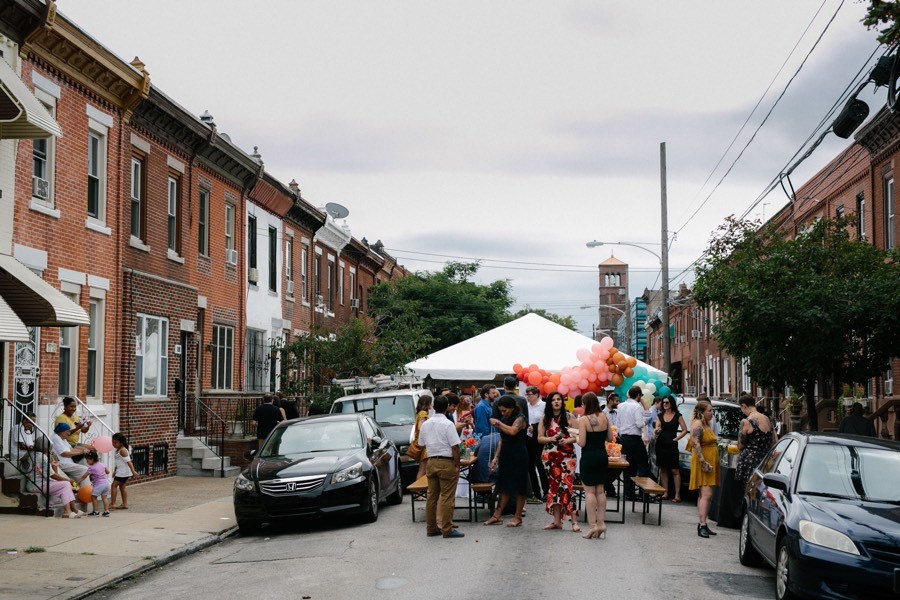 “We were going to Italy for my 30th birthday at the beginning of March,” says Liz, who’d been told by Bario Neal that her ring wouldn’t be ready until the middle of the month. “On our second night, we were in Rome and Tom wanted to see the Trevi Fountain. Earlier that day, we had talked about how I am always the one taking pictures and Tom went on about how I make ridiculous faces when pictures are taken of me. So, when we got to the fountain later that night, he insisted on taking my picture. He started asking me questions: Do I love Rome, Do I love him … I assumed it was because he was trying to get me to smile like a normal human being, so I kept trying to give very natural smiles and answer. Then he asked if I would marry him and got down on one knee. He hadn’t been taking my picture, he was taking a video. It was so sweet and I was genuinely surprised! We then went and had really good carbonara.” 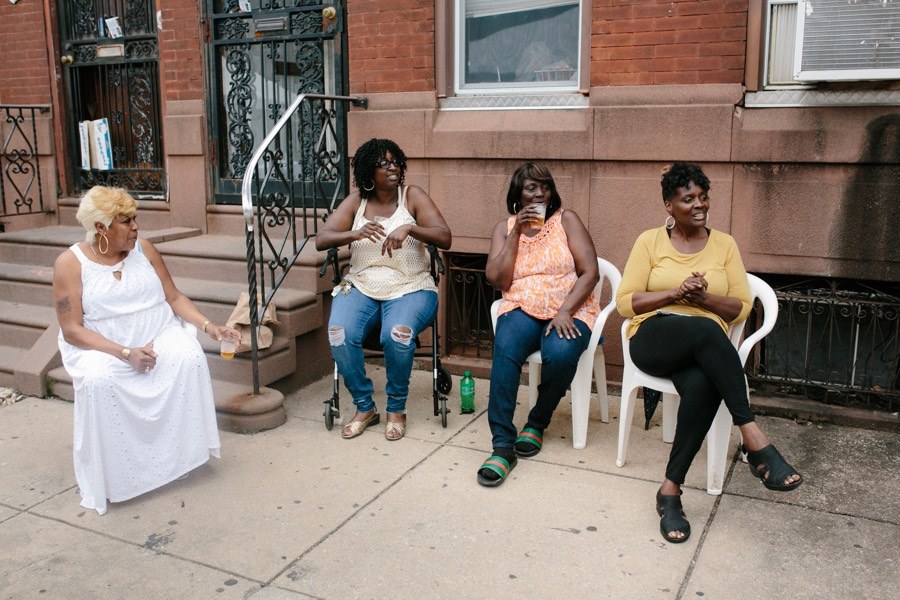 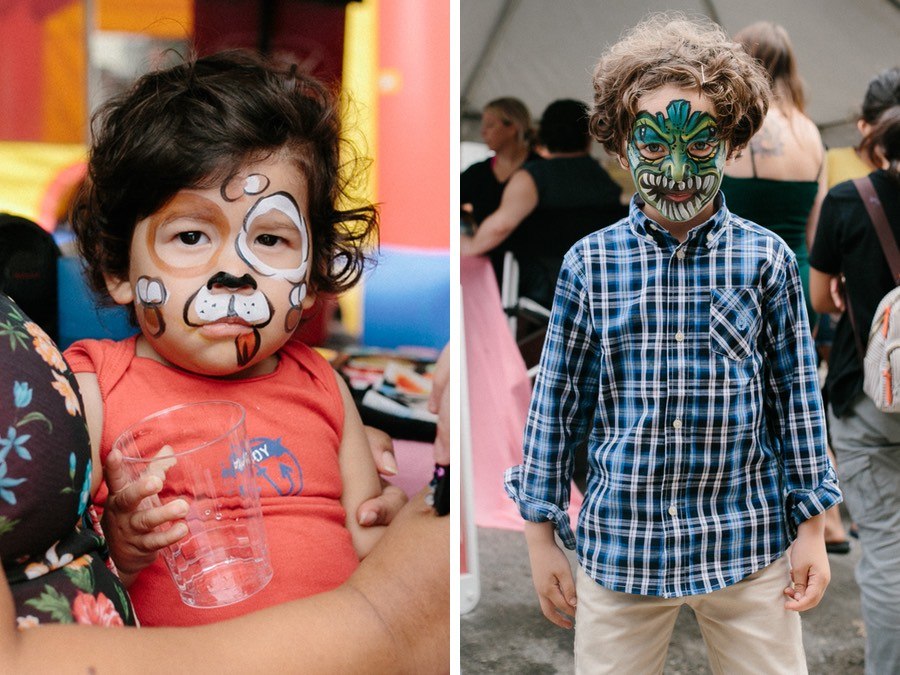 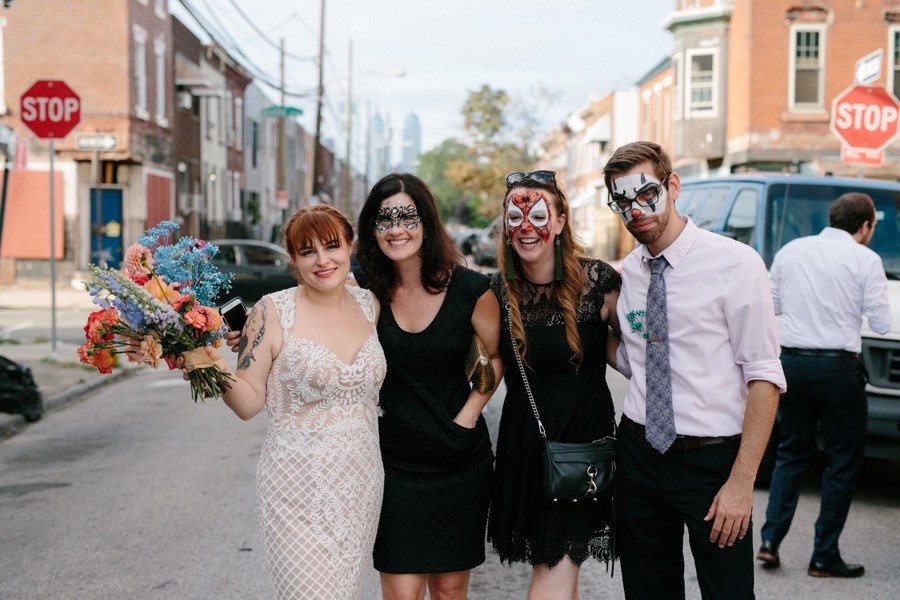 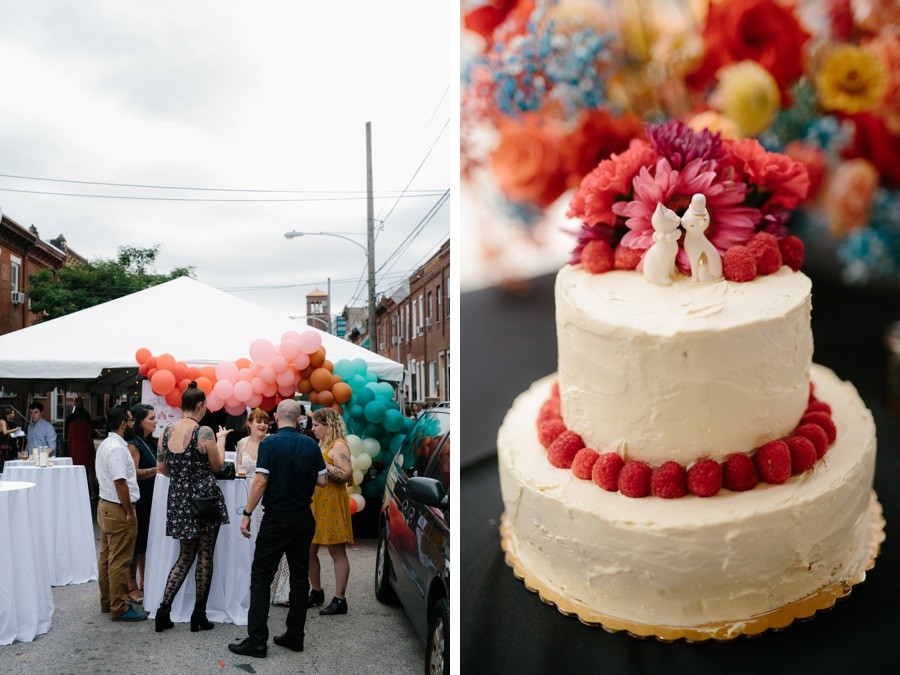 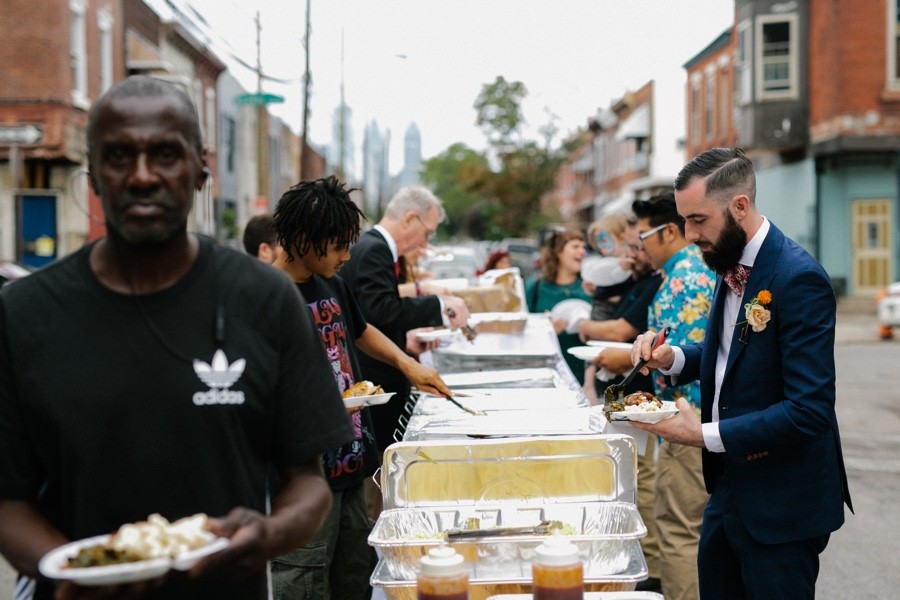 Tom and Liz had started planning their Big Day before the engagement, so it only took six months for the rest of their block party wedding to fall into place. After posing for portraits with their four kids and extended families in the neighborhood, they exchanged vows underneath a balloon-festooned tent. Dinner kicked off with three types of meatballs served from the Mama’s Meatballs food truck, and later transitioned to a buffet of pulled pork, chicken, brisket, collard greens and mac ’n’ cheese from Mike’s BBQ. Everyone living on their block was invited to join in on the fun.

“I loved how much fun our neighbors had and how helpful they were,” says Liz of the day. “It was super important to us that everyone felt like a guest, felt included and welcome. I was really touched that people pitched in and helped us clean after, and they still tell us what fun they had.” 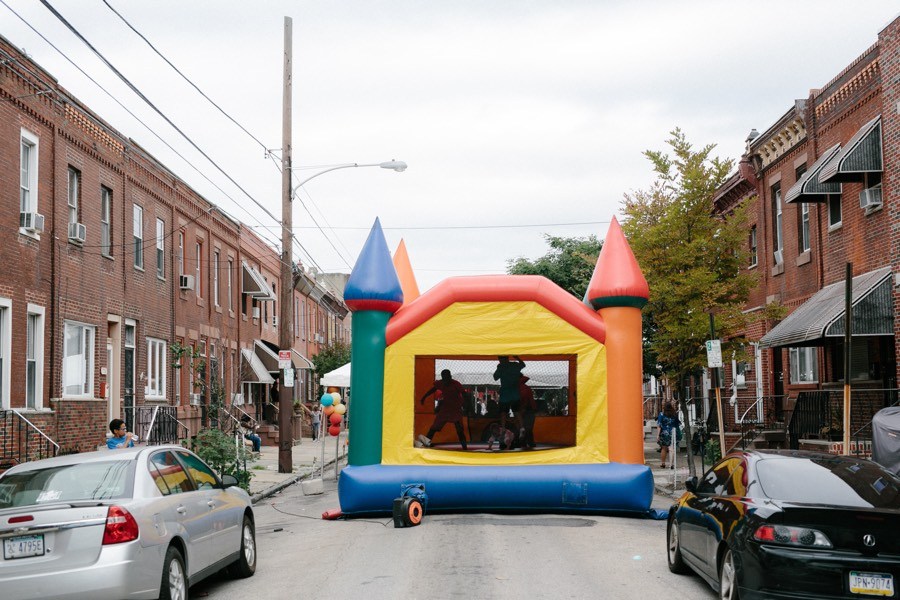 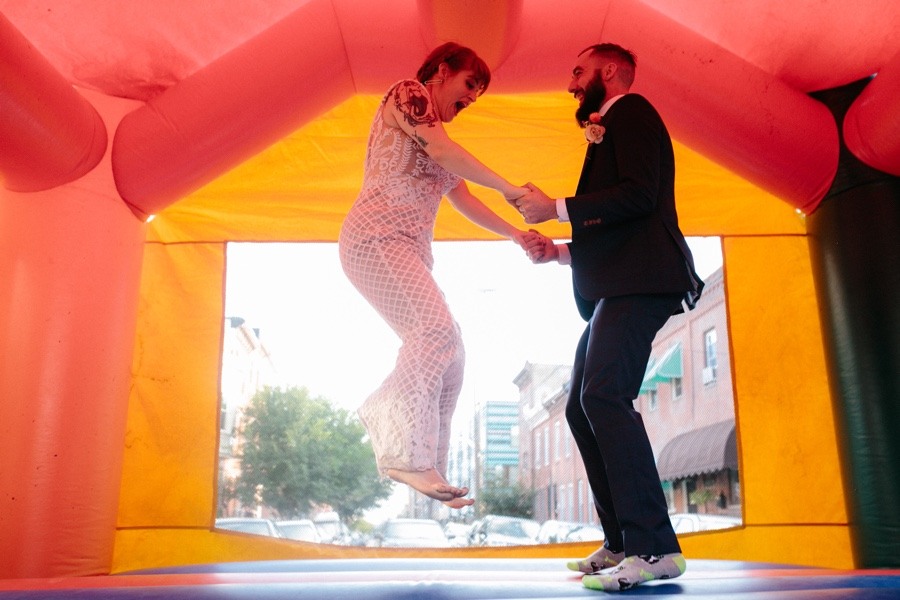 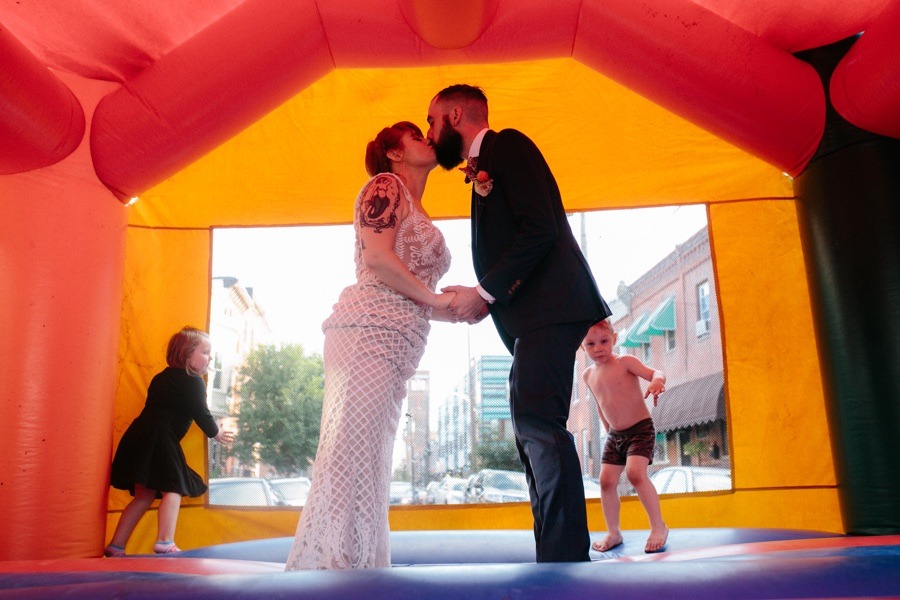 To celebrate both their wedding and Tom graduating from a credentialing program, the couple is headed back to Italy next August, and will take a longer honeymoon in Vietnam in 2020.