I Never Wanted My Proposal to Be Photographed. Here’s Why I’m Glad It Was.

Plus a few tips for surviving the experience. 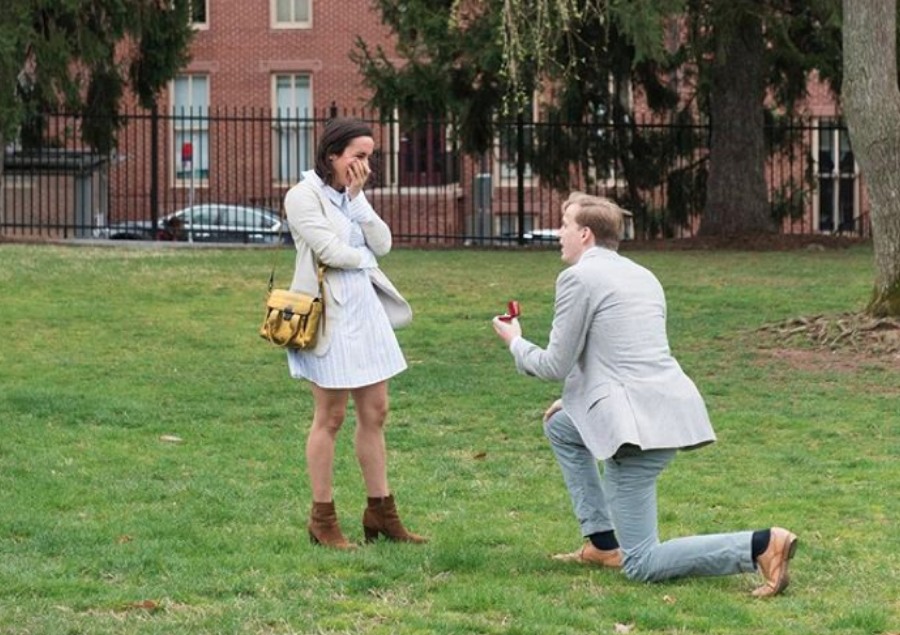 I had no idea it was coming. Honestly.

Well, not no idea. My fiancé, Zach, and I had discussed marriage, and we’d generally agreed that it was something we were interested in doing together. I remember that conversation, on the beach in San Diego over Thanksgiving a few years back. It wasn’t some grand, romantic thing—just a warm, easy mutual affirmation of wanting to keep living the life we were already living together. He probably put his arm around me and smiled, and that was that. We went back inside and went on with our night.

That’s me—I’m not a grand, romantic person. Even as a wedding editor, I hadn’t done a ton of visualizing of what this moment might look like in my own life, which meant I certainly hadn’t envisioned the actual proposal.

Flash forward to a morning several months later in DC. Zach and I were meeting my mother (or so I thought) for a fancy brunch later in the day and had some time to kill, so Zach suggested a walk around my college campus. I’ll jump at any chance to buy a Hoya Saxa t-shirt, so I happily obliged. But when I tried to drag him to the bookstore, he put his hands on my shoulders, and launched into his speech. I’ve always told Zach that getting to see myself and my younger sister graduate from Georgetown was peak happiness for my late father, who’d attended the school himself. I’ve explained that, before he died, I don’t think my dad spent too much time imagining life beyond that for us, because it was such a pivotal experience for him. That day, Zach told me he wanted to bring me to campus for what was about to happen because he couldn’t imagine a life beyond me. Then, he got down on one knee. The kids grilling on the lawn behind us clapped and cheered. It was, as pretty much every person donning an engagement ring for the first time annoyingly says, perfect.

It wasn’t until after I’d uttered “No Way!” for the fifteenth time and finally let him slip the ring on my finger that I saw it—the familiar blunt bob of one of my favorite photographers, Abby Jiu. Abby and her associate Lisa had emerged from behind the BBQers, and their cameras were pointed straight at us.

Oh NO, I thought. Is there any way — please, let there be a way — that they’re here for anyone other than us?

Because here’s the thing: I love sharing proposal stories. It’s one of my favorite parts of the job. The pride and excitement in the proposer’s face; the emotion exhibited by person getting proposed to as they inevitably lift their hands to cover their mouth in excitement. (Side note: why do we do that?) It gets me every time.

But, as a person, the idea of being in one always kinda made me cringe. Asking someone to spend the rest of your life with you is an extremely personal, vulnerable thing, and so is choosing to say yes. You shouldn’t have to worry about being “on” and looking like you’re emoting properly during the experience. And, because we’re being honest here, I also really, really hate having my picture taken. My anxiety takes over, and I overthink everything. I tense my mouth instead of smiling, squint my eyes instead of opening them (they typically appear closed in photos), and frantically try to apply the dozen or so tricks I’ve learned for looking better in pics all at once, so they all cancel each other out. I look awkward 9 times out of 10, and I’ve always felt prematurely guilty knowing I was going to ruin the visual memories of any moment as important as this one.

Sure enough, after the actual proposal was finished and Abby and Lisa got closer to us, I backslid into all my regular, unfortunate habits. I was elated, of course, but the anxiety of being in front of a camera certainly wasn’t letting me show it. I failed, hilariously, and multiple times, at standing next to Zach like he was a person I liked — instead I gripped his arm like I needed his help standing up. But once I got that sorted out, I also kept lifting my chin, which is a thing you’re not supposed to do, thereby ruining another set of shots.

Things finally got easier when I started doing two things:

Abby and I know each other from my days working at a bridal magazine in DC, so that was a definite advantage. I felt comfortable sharing my anxiety with her, and she felt comfortable giving me direction to help alleviate that anxiety. (Should you find yourself in a similar situation, and you don’t know the photographer, I cannot stress strongly enough that it’s worth listening to any gentle instruction they may offer. They want the same thing as you — to get the best photos possible.)

So I’d do these things for a bit, giving her a few frames of optimal posing, but inevitably, something would shift and I’d slip back into my old habits. The most helpful thing I did for myself in those moments was to accept it. Getting engaged is awesome, but it doesn’t have the magical power to suddenly render you a graceful fawn in front of the camera. (You’ve read the articles about Instagram influencers — that takes years of work.) The best I was going to do was listen to her professional instructions and hope that, somewhere between slip-ups, there’d be a frame where both our eyes were open and we were smiling like normal humans.

And then, at a certain point towards the end of the session, I just gave up. I didn’t give up being aware of the camera, because that seemed impossible, but I gave up trying to do things for it. I stopped flipping my hair over the front of my shoulders (I was self-conscious about its in-between length), and I stopped trying to trying to stand in a way that made my legs look skinny. Zach and I sat down on some townhouse steps, and we had our own conversation about what had just happened. Somewhere in there, Abby took my favorite shot of the day. 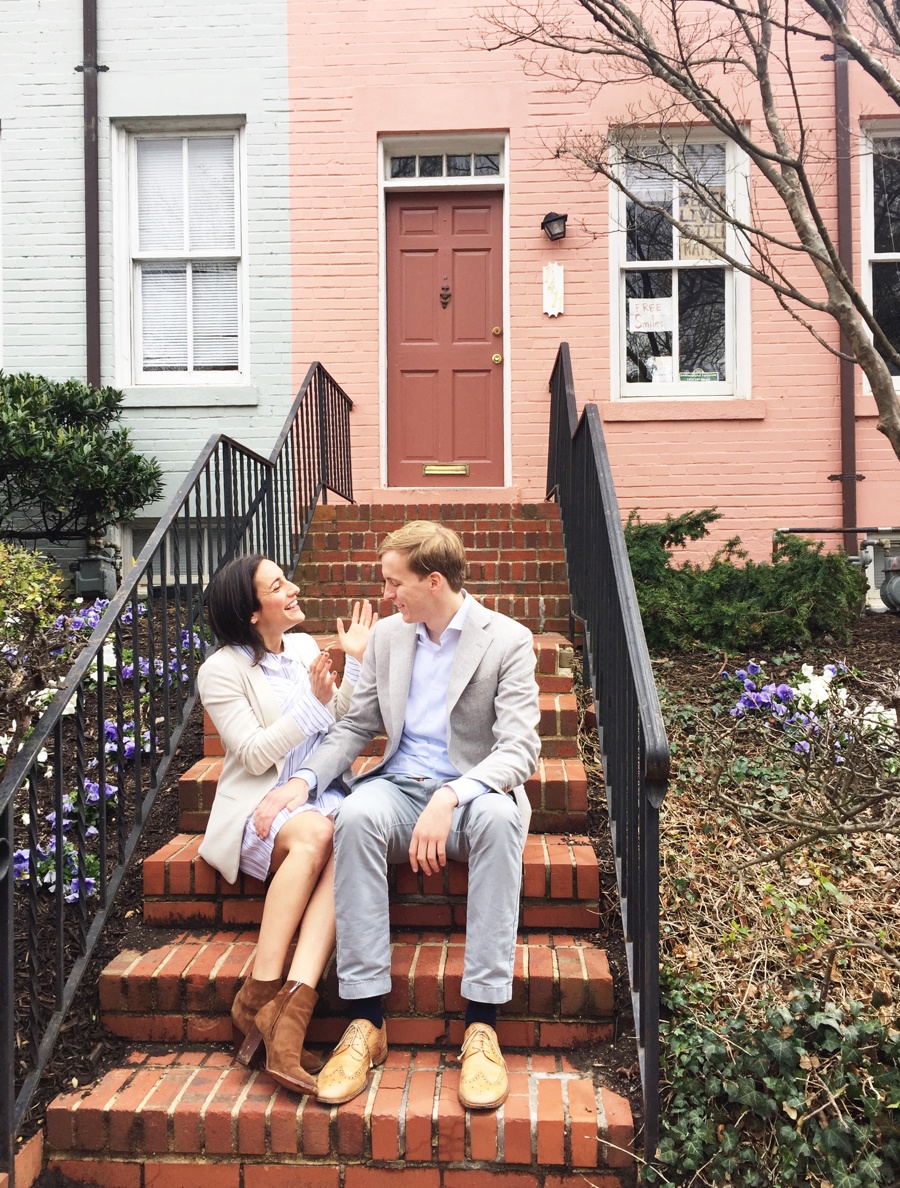 My eyes are squinty, but my smile is wide. I’m overly-excited and talking with my hands, like I always do, and he’s patting my leg comfortingly, like he always does.

That’s the shot I have framed on my desk. It’s the one we used on our Save the Date. And yes, it’s also the one I posted on Instagram. As a couple who isn’t terribly photogenic, and therefore hasn’t posed for a lot of pictures over the course of our five years together, we’re both really grateful to have a visual memory we both like from this day. (In case you’re wondering, other than when Abby first sent along the photo set, the only time I’ve looked at any of the ones where he’s actually down on one knee is when I was writing this article.)

So, even though I balked at the idea in theory, and I felt self-conscious the whole time while it was happening, I’m glad Zach had the foresight to participate in what can seem like a strange new ritual of our social-media-obsessed times.

He and I are going to be primed and prepped to within an inch of our lives on our wedding day. Am I going to wear false eyelashes? Absolutely. Will I have extensions in? Most likely. We’re going to look great, but we’re not going to look like ourselves. This photo, where my hair hasn’t been washed for a few days, and Zach’s socks don’t really match his outfit, is what we actually looked like when we agreed to spend forever together. And that’s how I’ll always prefer to think of us.