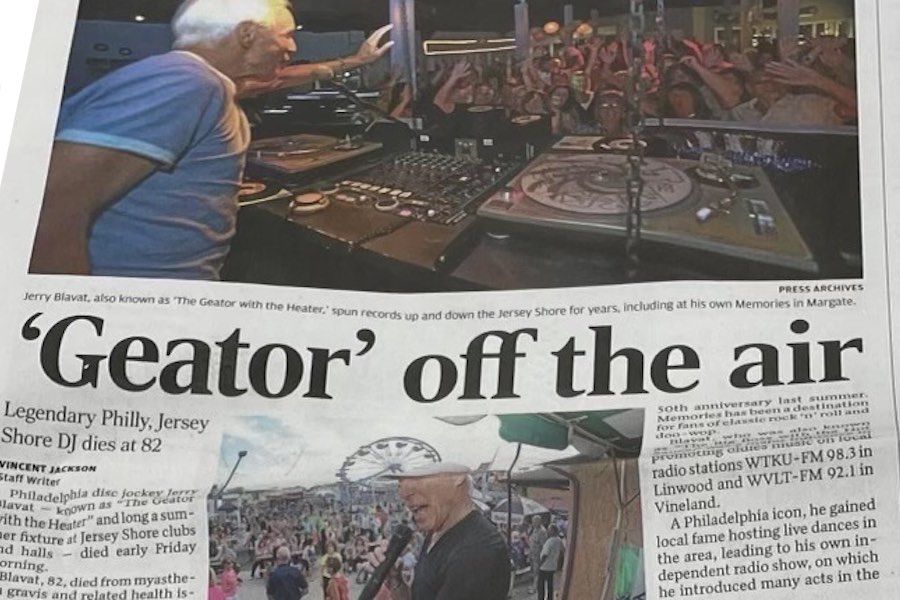 The headline on a Jerry Blavat obituary (photo provided)

Newspaper Has a Headline-Fail With Jerry Blavat Obituary

There are all sorts of creative decisions that make me scratch my head. Why, for instance does Elton John insist on repeating the chorus in “Rocket Man”? You know the one…

And I think it’s gonna be a long, long time
‘Til touchdown brings me ’round again to find
I’m not the man they think I am at home
Oh, no, no, no
I’m a rocket man
Rocket man, burning out his fuse up here alone

And I think it’s gonna be a long, long time
‘Til touchdown brings me ’round again to find
I’m not the man they think I am at home
Oh, no, no, no
I’m a rocket man
Rocket man, burning out his fuse up here alone

And he does that not once but each time he hits the chorus in the song. If I ever met him, I wouldn’t ask for a photo or autograph. I would ask why the hell he did that. I have similar questions about “Tiny Dancer” in which he repeats not just the chorus but also a verse. But I digress.

I noticed a similarly painful creative decision in the wake of Jerry Blavat’s death last week. This was big news in the Greater Philadelphia area. And so it was the lead story for many media outlets, including the Press of Atlantic City, Jerry Blavat always having a huge presence at the Jersey Shore.

The morning after Blavat’s death, the Press of Atlantic City opted for the tasteless headline “Geator Off the Air.”

“What a hit job on the front page of the Press about our beloved Jerry!” wrote one commenter on the Press of Atlantic City‘s Facebook page. “… Just shows how low the Press is and it’s not fit to line my cats kitty litter pan.”

Anyway, I reached out to the reporter as well as the newspaper’s editor, Buzz Keough, but didn’t hear back from either by deadline.

A spokesperson for Jerry Blavat’s family has released funeral arrangements. A viewing, mass and celebration of life will take place this Saturday at the Cathedral Basilica of Saints Peter and Paul, a.k.a. the big church at the intersection of Race Street and the Parkway. The viewing starts at 9 a.m. with a mass to follow at 11:30 a.m. “The Boss with the Hot Sauce is with the Big Boss now,” the spokesperson said in a statement. The family asks that mourners consider making a donation to the Kimmel Center’s Jerry Blavat Endowment Fund in lieu of flowers.

Monday is a pretty dismal day weather-wise. And Wednesday looks no better. But snow enthusiasts might like to know that they are currently calling for a snow-to-rain event on Wednesday. Though I don’t understand how that’s possible, since they are also calling for a low of 40. Then again, I never went to weather school.

A match made in heaven?

Apparently, today is the first day the IRS will accept and begin to process your tax return. I don’t know about you, but I haven’t even received a single tax document in the mail yet.

And from the All-Flying-Now Sports Desk …

The city was throbbing with excitement before Saturday night’s big game against the Giants! The Mummers were out in force.

The Giants were outta H2O.

We always thought they played dirty. Let the battle begin! On the Eagles’ very first series:

He threw all over the Giants in the first meeting, too. They may do more of that early than everyone thinks.

#Eagles fans boo the broken 1st down marker chain. Had it coming, IMO.

Haason Reddick had a sack — well, sort of. And on the next play, another sack! We took over on downs, drove down the field, and DeVonta Smith …

Slim Reaper with the score—and Jalen Hurts has two touchdown passes and zero incompletions through the first 14 minutes of the game.

And an interception by James Bradberry! On to the second quarter.

Oh my goodness, was it halftime yet? Not quite!

Jalen Hurts caps off a great first half for the Eagles with this touchdown run.https://t.co/lQz3Wwxr6jpic.twitter.com/ZAuYYtZfIB

On to the third! Eh, touchdown Giants.

Quiet third quarter otherwise; on to the fourth! Miles Sanders was on fire, and Kenneth Gainwell was out there fighting hard. Field goal Iggles!

Jake Elliott 12-for-12 in his career in postseason field goal attempts.

3rd-most attempts in history without a miss.

The Philadelphia Eagles are going to the NFC Championship Game after beating the Giants 38-7! #ItsAPhillyThing #FlyEaglesFly pic.twitter.com/CiaCcPpReM

On Sunday, the Cowboys and the 49ers played a long, boring game to determine which team the Eagles will face this coming Sunday. We’ll give you this one highlight:

And the winner was … the Niners, 19-12. Only they’re really the loser, because now they have to PLAY THE IGGLES!

Okay, the Eagles game sort of distracted me from the Sixers vs. the Kings, who started their 10 p.m. matchup right around halftime. The Sixers starters were P.J. Tucker, Tobias Harris, Montrezl Harrell, Tyrese Maxey and De’Anthony Melton. Joel Embiid was out with foot soreness, and James Harden was out as well, also with a foot strain. It was the last game of their eight-day road trip. The Kings were coming off a six-game winning streak, while the Sixers had a four-gamer going. Our guys didn’t get off to a good start.

Sixers trail by eight after one. | @Kia pic.twitter.com/E8wzvsQNqL

Maxey was working hard in the third and cut it to a five-point lead, 80-75, three minutes into the third. And then to three, with utter hustle!

Sixers with all the momentum now

A Harris three made it one point! And a made foul shot on a Harrell layup tied the game at 86! Harrison Barnes hit his sixth of seven threes on the night, but with three minutes left, a Maxey jumper gave the Sixers their first lead of the night, 95-94. And then …

C’mon Sixers, close this shit out.

Meantime, in college hoops (read to the end for the thrilling conclusion!): On Friday night, Villanova (10-10) and St. John’s (13-7) were tied at 28 at the midway point in a tight half that neither team ever led by more than three points. In the second half, Villanova went up by one with four minutes left with a 9-2 run, then came through strong at the end with a 19-5 run to win, 57-49.

Penn dropped one to Yale and plays again tonight, against Hartford at seven.

And in what turned into an unexpected battle royal, Houston, ranked number one in the country at 18-1, paid a call on Temple, who were 11-9. It was dead even at the half:

And a seesaw through the second half, with the Owls even taking the lead by as many as six.

Temple 55, No. 1 Houston 48 with 6:19 to go. Damian Dunn just drew a charge on Marcus Sasser, who picked up his fourth foul in the process. The Owls are in the double bonus from here on out, and they've shot 19 of 20 from the line.

Temple hadn’t beaten a number one team since 2000, but they won this one, with pure heart, by one big point.

Giant killers all around this weekend!

The Flyers played … and will play again.