We talk to the Eagles fan who made his podcast-inspired dreams come true — and find out what’s next for his baby. 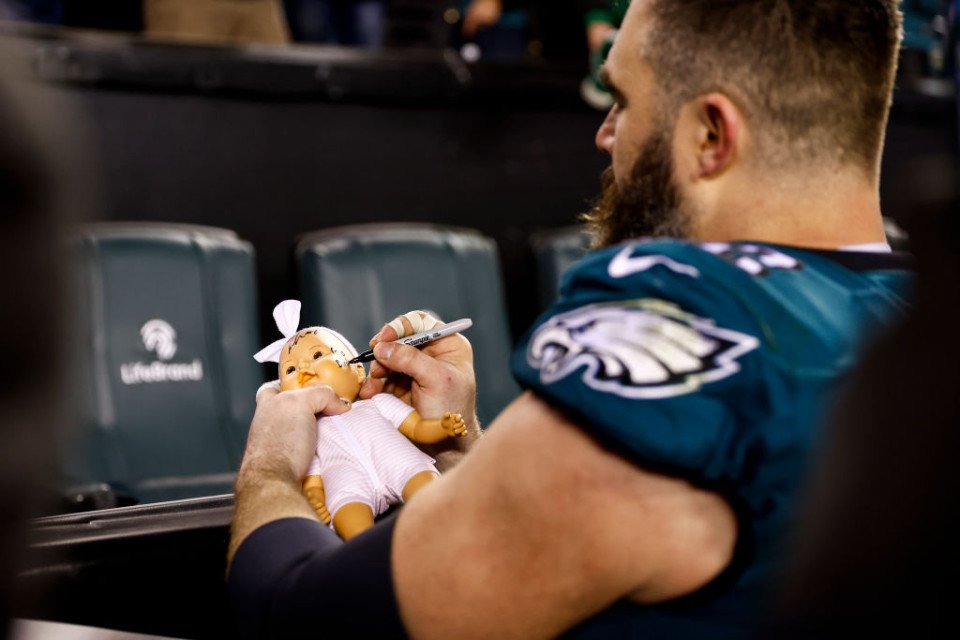 Jason Kelce of the Philadelphia Eagles signs a baby doll for a fan after an NFL divisional round football game against the New York Giants at Lincoln Financial Field on January 21, 2023 in Philadelphia, Pennsylvania. / Photograph by Kevin Sabitus/Getty Images

As you probably know, Eagles center and all-around Philly legend Jason Kelce hosts a must-listen podcast with younger brother Travis Kelce, a tight end for the Kansas City Chiefs. “New Heights” highlights the brothers’ big personalities and gives fans a glimpse into their relationship and football careers, all while being hilarious. If you’re not listening, do yourself a favor and start — it’s delightful.

On one episode of their podcast, the Brothers Kelce discussed the strangest thing fans have ever asked them to sign. Travis’s answer? A baby, which he declined: “I did not put a Sharpie on a baby.”

For his part, Jason said he would have done it. “I’ll sign a baby. Gimme a baby, I’ll sign it.”

Well, on Saturday night, after the Eagles demolished the Giants, 38-7, in the divisional playoff game to make it to this week’s NFC Championship matchup, someone called his bluff. Well, sort of. 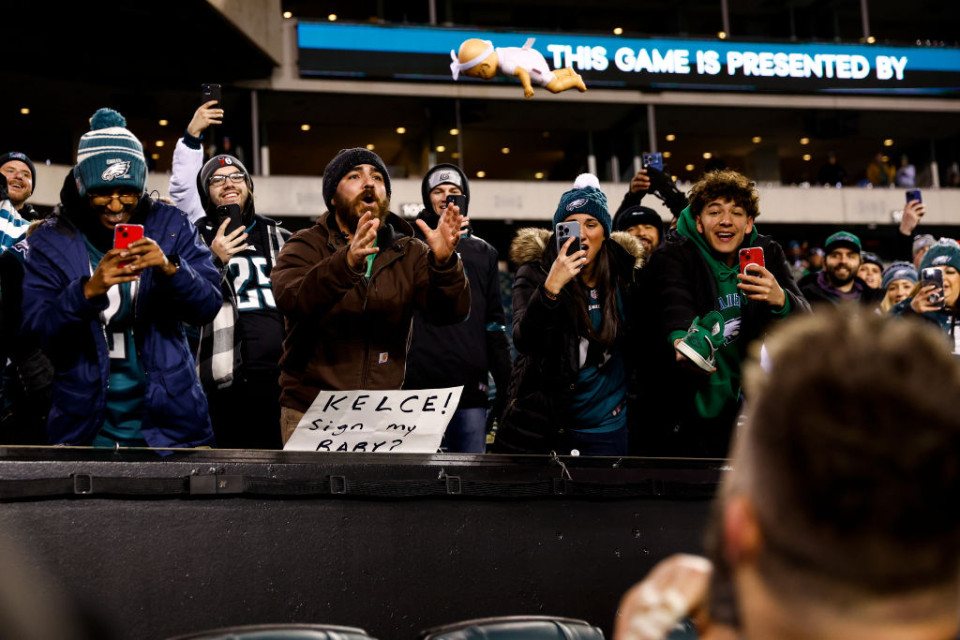 Kyle McCorry throws his baby at Jason Kelce after the Eagles beat the Giants at Lincoln Financial Field on January 21, 2023 in Philadelphia, Pennsylvania. / Photograph by Kevin Sabitus/Getty Images

Kyle McCorry, a huge fan of the Eagles and the “New Heights” podcast, decided this was happening well before Saturday’s game.

“If I had a real baby, I would definitely ask Jason Kelce to sign him or her,” McCorry tells me.

Alas, not having a baby of his own — nor wanting to steal a doll from a child, for some reason — McCorry ordered the baby doll from Amazon (we’re talking at least two days’ premeditation here, depending on how fast Prime is, people!). But not just any baby doll would do: “I looked at a few, but I wanted one that was the right mixture of creepy and funny,” he explains. “I didn’t want it to be too creepy; I did not want to put that sort of energy out there. I’m a very superstitious guy.”

So he tucked the doll into his hoodie like some kind of reckless BabyBjörn, Sharpie’d some poster-board with his straightforward request, and headed to the game. 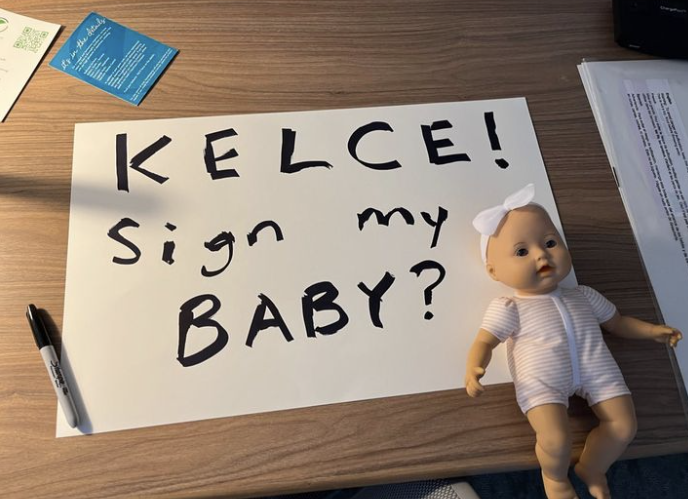 “I’m trying to prove to my wife that I can be a responsible father.” Mission accomplished, you glorious hero.

With just two minutes left in the game, McCorry made his way to the front row of his section and held up his sign. At this point, Jason wasn’t in the game anymore. “I look over and I see him looking in my direction and I’m like ‘Oh shit, does he see me?’ … I wave the baby around, and he sees it and he laughs, and then points and smiles at me.”

This would already have been enough: “He saw my sign, he saw the baby, I got a reaction out of it, he acknowledged it — for me, that was a win.”

Was this the end of the story? Of course not; McCorry seized his moment after the Birds’ decisive victory.

After a post-game, on-field interview, Jason started walking toward the tunnel to the locker room. “But then he stops,” McCorry describes, “I could tell, he had a realization like, ‘There’s a baby I need to sign!'”

Jason then walked over and yelled, “Throw me that baby!” History was made: He signed that baby right on its face and threw it back into the crowd. Dreams really do come true.

That baby had it comin! https://t.co/mtsZ4LQz4q

So what’s next for the baby? “The baby has big dreams,” McCorry says. “Besides getting a college fund set up for this baby, maybe like a 529 plan from Lincoln Financial, I’m hoping to bring the baby back for the NFC Championship game,” he adds. Perhaps field tickets from the Kelces, he dares to wish.

Of course, in McCorry’s wildest dreams, the Eagles beat the 49ers and the Chiefs beat the Bengals, setting up a Kelce vs. Kelce matchup in the Super Bowl. And then? “Maybe the baby can go the the game, and also get Travis to sign it.”

We’ve never wanted anything more for a plastic baby doll from Amazon without a name.