OK, What’s Up With All the Disembodied Pigeons on Philly Streets?

Plus, a mayoral candidate with a checkered past, Eagles/Giants odds, and the return of the neighborhood fish truck. 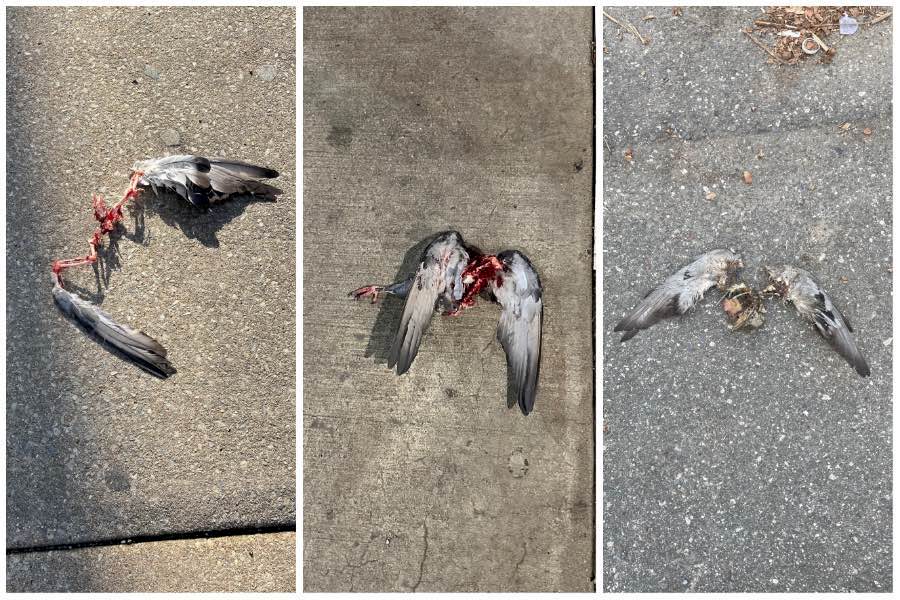 I’ve lived in Philadelphia proper for about 30 years. And between being an avid walker and a reporter, it’s fair to say that I’ve walked the streets of pretty much every neighborhood the city has to offer. I’ve seen it all. But until last weekend, I had never seen disembodied pigeon wings.

There I was in West Philadelphia when the bloody pigeon wings appeared in front of me. I’ve been on my share of hunting trips, and I’ve butchered pheasant and quail, so dead fowl doesn’t exactly startle me. But startled I was to find these pigeon parts on bustling 52nd Street.

And I’m not the only one to have encountered slaughtered pigeons of late. Philly Mag editor-in-chief Brian Howard and Philly Mag features editor Bradford Pearson both report pigeon-part sightings from the last couple of weeks. And they have the photos to prove it.

“They flopped to the ground ten feet in front of me as I was walking back from the post office,” Howard says of the wings he discovered at 10th and Dickinson.

Pearson’s pigeon wing incident took place at 13th and Wharton while he was out for a stroll with his daughter, who happily posed with the beast.

I didn’t think much of my own isolated encounter with pigeon parts. But three Philly Mag writers in a little over a week seems to take it beyond the realm of anomaly.

Jason Weckstein, the curator of ornithology at Drexel’s Academy of Natural Sciences, suggests the most likely culprit in these pigeon murders is the peregrine falcon, though he says one of Philly’s many hawks could be to blame as well. As Weckstein explains it, there were virtually no falcons or hawks in Philadelphia a few decades ago thanks to DDT, that nasty insecticide that caused so many problems in the world.

“But these days, we have a very healthy population of predatory birds,” says Weckstein, going on to explain that they like to hang out on local bridges, at City Hall, and atop churches. “And nobody likes pigeons, because they poop everywhere, so…”

So clearly our pigeon friends were the victims of birds of prey. But three disembodied pigeons among three Philly Mag writers in a small amount of time? Surely there must be something new going on here, right? Alas, Weckstein says he doesn’t think so.

“I think the three of you just got lucky,” he says with a chuckle. “Hawks and falcons are everywhere nowadays. I sit in a park near my house in Wynnewood, and it’s wild to watch them in action. Nobody else in the park has any idea that they’re there. But it’s amazing what you see if you just look up.”

OK, so based on that, I’m willing to hold off on making any judgments about the End Times or calling my 5G conspiracy friends to weigh in. For now.

The Eagles are 7-point favorites in this weekend’s playoff game against the Giants. The Eagles have been similarly situated in the betting world four times before in the playoffs and came through three out of those four times, winning and covering the spread. The one time they didn’t? When they lost to the Giants in 1981.

Everybody Wants to Be Mayor

Including perpetual Philadelphia political candidate Warren Bloom, who has a rather, shall we say, checkered past.

Josh Shapiro gets sworn in as Pennsylvania’s governor today. But what’s up with all the secrecy? Hey, at least he’s an Eagles fan.

On Monday, dead bodies were found outdoors in Upper Darby and at Heinz Wildlife Refuge. Police are investigating.

There was plenty of college action on Martin Luther King Jr. Day. Villanova took on Georgetown.

And Princeton traveled to Penn.

Tonight, the Sixers, who’ve won the first two games of their five-game West Coast road trip by a single point each, take on the Clippers at 10. Crap, can these games get any later?