We reached out to Philly's previous mayors to see how they handled interactions with families of homicide victims. 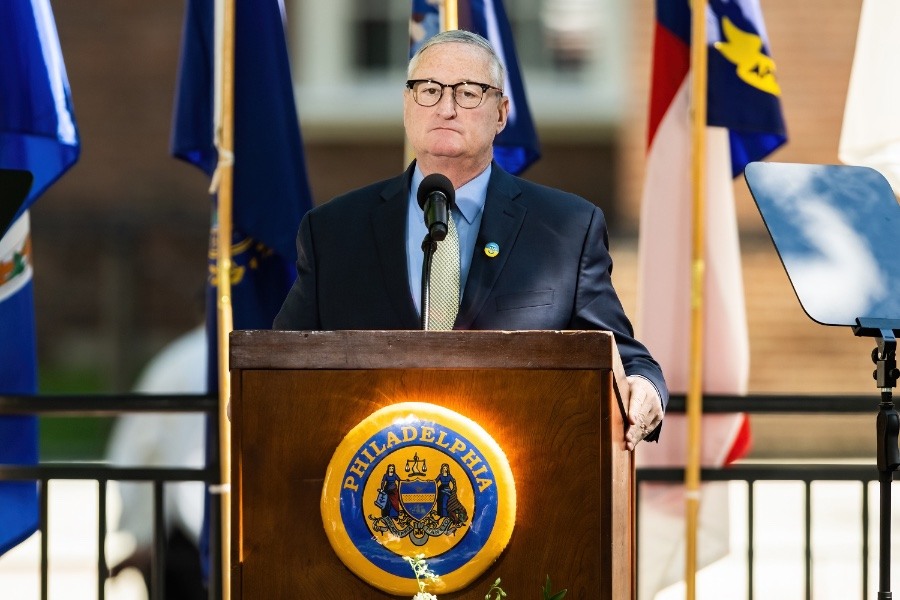 Mayor Jim Kenney at the Fourth of July Celebration of Freedom Ceremony looking, well, you can see for yourself / Photograph by Gilbert Carrasquillo/GC Images via Getty.

For a while now, Mayor Jim Kenney hasn’t had the look of a man who enjoys his job. Being mayor sounds like a pretty hard job, to be fair. But surely it must have its feel-good moments, like when Philadelphia was recently named a host city for the 2026 World Cup. On that day, an Inquirer photographer was on site to capture the scene at LOVE Park, and the resulting photo depicts a veritable mob of euphoria: people embracing, mouths agape mid-scream, arms raised in triumph. That is, until your eyes wander to the center of the frame and see a cranky-looking man in the midst of a perfunctory clap: Mayor Kenney. And to think this is a guy who once tweeted, “I love love love the World Cup!!”

We don’t need to engage in facial-expression forensics to discern that Kenney doesn’t like being mayor, though. We can just take him at his word. Earlier this month, Kenney said that, two and a half years into his second term, he was looking forward to the day he would no longer be mayor. (He later walked those comments back — sort of.)

This week brought a new head-scratching declaration. At a press conference on the city’s response to the gun violence crisis, Kenney shared that he hasn’t met with any families of homicide victims during his seven years as mayor. (There have been 305 people murdered in Philadelphia so far this year, just one percent off of last year’s record pace.) “I have not spoken specifically to families,” he said. “As far as homicides are concerned, I don’t know that it’s productive that I intercede during or while the investigation is going on.”

When he was later asked to clarify — “So you haven’t had a chance to meet with any relatives of any of the 300 homicide victims in the city this year?” a reporter asked — Kenney replied, “Not specifically. I may have had conversations with them. There’s been no specific meetings set up. I’ve never met with any families in almost seven years in that regard.” Then he added, “I don’t know if any mayor has done that.”

Huh. That last part sure seemed unlikely. So we reached out to all five living ex-mayors of Philadelphia to hear whether they used to meet with families of murder victims during their time in office. Bill Green and Wilson Goode couldn’t be reached for comment, but Ed Rendell, John Street and Michael Nutter could. Here’s what they had to say.

Rendell says he met with families of murder victims throughout his time as mayor — sometimes in his office at City Hall, sometimes at the hospital. “I wouldn’t do it on regular basis, but if anyone expressed a desire to see me, I would, by all means, meet with them,” he says, estimating that he’d have about 10 to 15 such meetings each year. “I often had meetings with families whose loved one had been murdered and the police had not made an arrest and then they complained about the investigation — police weren’t moving as fast as they could, et cetera,” Rendell says. “I met with them and tried to explain with them what was going on.”

Asked if he was surprised by Kenney’s remarks, Rendell said, “I’m confused, because I’m sure he has [met with families].”

“I did visit a small number of homicide victims, but extremely discretely. However, no mayor has time to visit all families as that would be very time consuming. … I think this criticism of the mayor is unfair and largely a reflection of general dissatisfaction and other more legitimate issues.”

Nutter says that he, too, used to have meetings with families of murder victims. “There were certainly in-person meetings from time to time,” he says, “and a lot of phone calls — talking to families, expressing condolences and apologizing for what I felt was our inability to keep their child or family member safe. I took it like a personal embarrassment that we couldn’t do better.”

Sometimes Nutter wouldn’t wait for a family member to request a meeting. In 2014, after a three-year-old girl named Tynirah Borum was shot and killed by stray gunfire while getting her hair braided on her front porch, Nutter showed up to her mother’s house unannounced. “We sat down in her living room, just the two of us,” Nutter says. “She told me about her daughter, I apologized to her, and we just talked. And then she gave me a photo of Tynirah. I put it in my wallet that day and I’m looking at it right now. It’s been in my wallet every day since.” To Nutter, conversations like these were “just kind of a basic human component of the work, and of public service, you know? Every day is not going to be sunshine and rainbows. But you still do it.”

Which brings us back to Kenney.

The Mayor has since issued a long statement noting that the “surge in gun violence that we’ve seen in our city — and across the entire country — is unacceptable and pains me to my core.” But the statement doesn’t really walk back anything he said during the press conference as it relates to meeting with families and instead lists the numerous initiatives, including the Office of the Victim Advocate, that serve to assist citizens who have been impacted by violence. “While I have been in touch and our administration continues to engage with some families of loved ones who were injured or killed by violence, the vast majority of the trauma and intervention supports are offered by various city departments because we know that violence prevention starts with prevention and ends in healing,” the statement reads.

Meanwhile, in a response to a request for comment for this story, a Kenney administration spokesperson further added that Mayor Kenney has met with families who have lost people to violence, including through a law-enforcement program called Group Violence Intervention, at a 2017 rally hosted by Inquirer columnist Helen Ubiñas, and on community listening tours. “He’s met with other folks on an ad hoc basis and the point he was making is that it wasn’t a systemic, regular thing he’s done, nor was he aware of it being systemic from other mayors. It happens by request mostly, as the past mayors seemingly acknowledged,” the spokesperson wrote. For some reason, none of this appeared in Kenney’s on-the-record statement.

Either way, just like Kenney’s earlier comment about no longer wanting to be mayor, the initial remark was revealing. It’s reflective of an exhausting, exhaustive sense of disengagement that Kenney seems either unwilling or unable to do anything about. It’s hard to believe that you’d make a remark about never meeting with families of homicide victims if you were often, or even occasionally, meeting with them. (It feels telling that the rally Kenney’s spokesperson pointed to took place five years ago.) At some point, you just have to start taking what the mayor of Philadelphia says and believing it.