The Inquirer’s Attempt at a Buzzy Anti-Racist Apology Failed. It Didn’t Have To.

Right after the paper published "A More Perfect Union," the NewsGuild union alleged that the paper was paying a Black staffer less than a white counterpart. Oops. 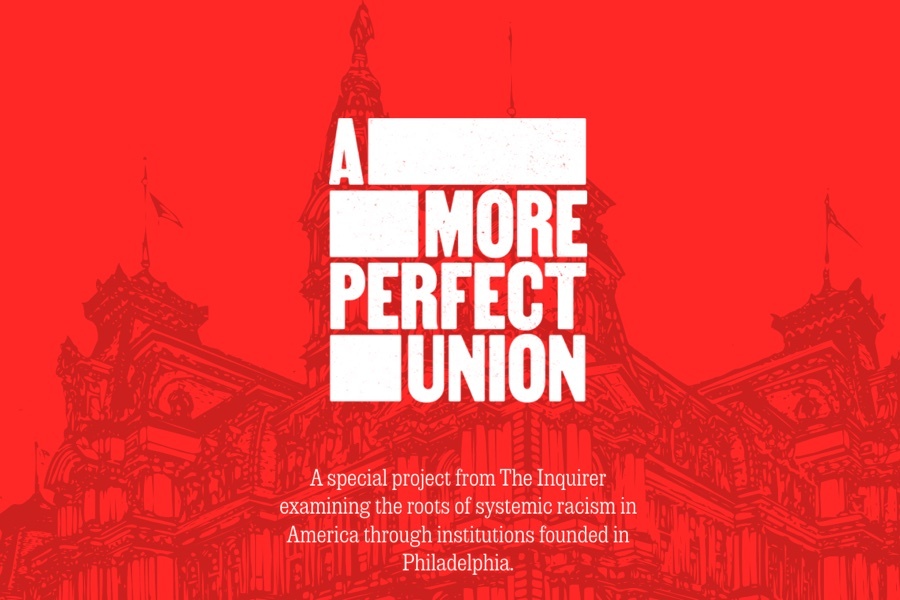 The online home of the Inquirer‘s “A More Perfect Union” project.

If there was ever a case study on what not to do in diversity, equity and inclusion work — last week’s epic fail at the Philadelphia Inquirer was it.

After nearly two years of backlash to its racist “Buildings Matter, Too” headline, the city’s paper of record has been trying to show its employees and the public at large that it’s better than that. The paper’s most outward-facing attempt at doing so has been the launch of a new series, “A More Perfect Union,” that “examines the roots of systemic racism through institutions founded in Philadelphia.”

The project’s contributing editor is nationally renowned Black journalist Errin Haines, and its first deep-dive feature story exploring the Inquirer‘s racist history was reported by Pulitzer Prize-winning Black journalist Wesley Lowery. It should be noted that neither of these journalists is a Philadelphia native, and Haines is currently a board member of the Lenfest Institute — the nonprofit that is funding this project and owns the Inquirer. While these nationally recognized Black journalists brought their star power to a project meant to convince readers who’d written off the Inky to reconsider (especially considering that the Inquirer and Lenfest have mass-marketed the project via social media, in newsletters, and to their subscribers), that wasn’t enough to stop the publication from getting in its own way.

After Lowery’s provocative report dropped, Inquirer publisher Elizabeth Hughes issued an apology on behalf of the publication to “the Black residents and communities of Philadelphia, to the Black journalists of the Inquirer past and present, and to other communities and people whom we have also neglected or harmed.” It was a like a well-oiled apology tour — one we had seen from the Inquirer before and before once more. Perhaps the fact that these were all apologies without much else attached made them so unconvincing. But this go-round, the publication put a lot of money and effort into an elaborate project. Could the third time be the charm?

As a longtime Black journalist in Philadelphia (and current president of the Philadelphia Association of Black Journalists, a nonprofit that has received funding from the Lenfest Institute), I knew something was off. As I know from working at publications with racist histories and that have made their own apologies, white people don’t often push DEI efforts unless there’s a problem. By simply giving us an exposé and an apology, the Inquirer gave the impression that its work here was done. But where was its DEI plan of action? Where was a call for community input? Simply telling us you have a racism problem, apologizing for it, and leaving us waiting for action was a bad decision — one with a high likelihood of backfiring.

And just like that, it did: The day after Hughes’s apology, the NewsGuild of Philadelphia announced that it had filed a grievance against the Inky claiming that a Black journalist currently working there was being paid less than a less-experienced white colleague doing the same job. In a statement sent to the Philadelphia Business Journal, the Inquirer‘s management said it was “handling the Guild’s grievance through the procedure required by its collective bargaining agreement and will not comment on the specifics of that ongoing matter,” but added, “The Inquirer is committed to diversity, equity and inclusion and is confident that its compensation system does not discriminate based upon protected characteristics.”

Yet earlier in the week, the publication had admitted to its own racial discrimination and apologized to Black communities and journalists for such harm. So what are we to believe?

News flash: This is why you don’t make a big show of addressing your racism without actually doing the internal work to wrestle with it. In my various executive board roles within PABJ, I’ve had formal conversations with Inquirer leadership about its DEI efforts. While the paper has made some strides (such as conducting cultural bias trainings, producing an anti-racism workflow guide, and commissioning an independent audit), none of these efforts emphasized a direct investment in community-led action to address problems. Before the Inquirer began to beat its chest about how anti-racist it was trying to become, it should have actually addressed grievances like the one submitted by the NewsGuild. Now, it’s hard to take the paper seriously, and easy to wonder what else isn’t being resolved as its leaders try to move forward.

It’s become clear from this rollout that the Inky still hasn’t come to terms with the fact that the “anti-racist publication” it’s striving for is still a goal and not a reality. All of the money spent on high-quality graphics and big-name national journalists to tell Black and brown communities in Philly what they’ve known for years would have been better expended on action, not words. The Inquirer would have been better off engaging stakeholders to develop a more transparent DEI action plan that both the staff and the community could weigh in on.

Did anyone involved here actually ask who thought this was a good idea? Seriously, who does this project serve, and why? Is this what the community wants right now? Is this the best use of resources? And where are the tangible solutions that accompany such an ambitious endeavor? Right now, the community at large is being asked to subscribe to the Inquirer to read about its racist history without being offered a sense of direction or even a call to participate in practical solutions that could improve the city’s paper of record.

For the Inquirer to simply put out triggering content (such as the facts that Black journalists were called “Aunt Jemima” and “boy”) and add an apology — that was immediately followed by an alarming accusation of racial discrimination — was a slap in the face to the Black journalists who worked tirelessly on this project. I’ve spoken with several current Black journalists at the Inquirer who are now questioning how they plan to move forward with the publication given this latest setback. While none of the city’s white-led publications, including Philly Mag, are above reproach, it’s not what you do to address the racism in your own backyard, but how you do it.

I’m willing to bet Black Philadelphians like me didn’t need the Inky’s self-congratulatory production of “A More Perfect Union” and would have preferred that the publication simply shut up and execute a plan with community voices and input at the forefront. For example, a community advisory board with diverse members offering recommendations and/or reviewing such sensitive content in advance would improve trust and accountability. Wordy lip service does nothing to get us closer to solutions and action; it just wastes our time and insults our intelligence.

If you care about marginalized communities, you should care enough to give them more than just apologies and rehashed anecdotes of harm committed. They deserve intentional efforts they can truly measure.