The $15 million the celebs pledged to send kids to private schools further chips away at a public-school system we owe it to ourselves, and to "our kids," to fix. 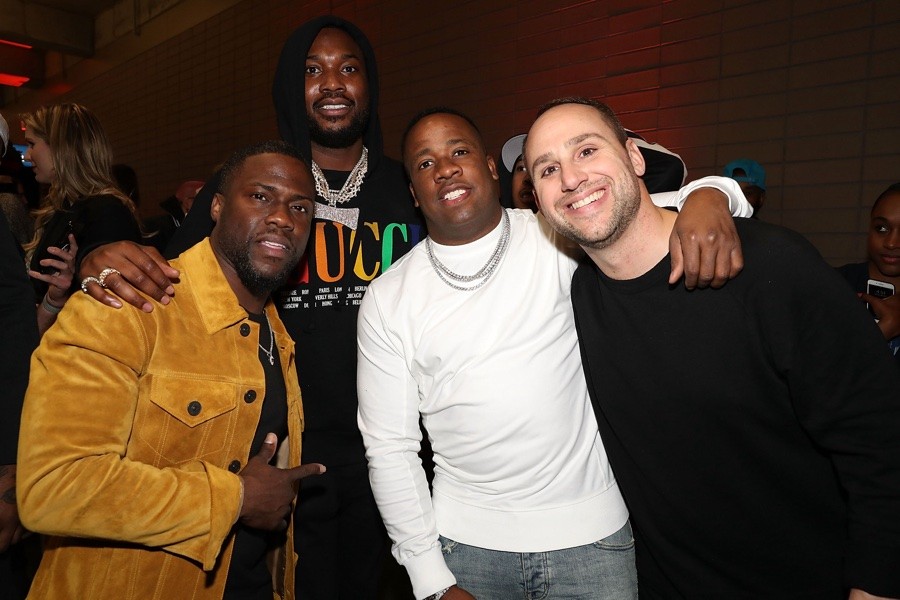 From left: Kevin Hart, Meek Mill, Yo Gotti and Michael Rubin at the 2019 Fanatics Super Bowl Party. Hart, Mill and Rubin have pledged money to send Philly kids to private schools, which could hurt public schools similar to the one portrayed in the new hit show Abbott Elementary. Photo by Shareif Ziyadat/WireImage

For the past month, I’ve been falling in love with the new hit ABC show Abbott Elementary.

Inspired by a real-life teacher in a Philadelphia public school, the show’s passionate (and very hilarious) teachers navigate the promise and pitfalls of educating their diverse students in underserved communities. There aren’t enough textbooks, the students are reading below grade level, and educators have to find creative (and desperate) means to keep their classes engaged. For example, a recent episode showed a teacher bringing in a formerly incarcerated South Philadelphian at the last minute to speak to their students about unions. (Talk about topical.)

While funny, it also hits a little close to home for anyone who’s worked in a public-school setting.

Throughout my career, I’ve taught after-school and summer learning enrichment programs at West Philly High School and Upward Bound. As a product of public education, I understand the importance of giving students who look like me extra care and mentorship within the system. I view those kids as “our kids,” because our taxpayer dollars help fund their education. I’ve never been a fan of private schools at the grade-school level, because they’ve only served to widen the gap between the haves and have-nots. To me, sending kids to private schools (who otherwise wouldn’t be able to afford it) is like saying that there should be a first-class education for an elite few.

Which is why it’s been hard for me to see people praising Philly celebrity millionaires Meek Mill and Kevin Hart — and their billionaire bro Michael Rubin — for donating $15 million in scholarships for private-school education. Sure, these rich men can do whatever they want with their money — but let’s not act like this is a step in the right direction. These scholarships are basically saying, Here’s some money to help the talented 10th get out of Philly’s public schools.

It would be easy to simply scapegoat these men for their tone-deaf response to education inequity in the city, but that response is actually reflective of a chronic hypocrisy. It’s obvious that Philadelphians say one thing and then do another when it comes to advancing public education in this town. Whether it’s backing our kids going to private schools or complaining about who gets admitted and how into a handful of magnet schools, we’re actually ignoring how to improve regular public schools, like the fictional Abbott Elementary, that are trying to provide a basic education for all. These current debates all but imply that average Philly public schools can’t give students a good education and/or a chance to succeed. And if that’s the case, what does that say about the futures of the kids who currently attend those schools? Right now, we should want all of our kids to have a fair shot to succeed. We shouldn’t continue to engage in policies that reinforce inequities.

Last fall, when the Philadelphia School District changed, in a bid for equity, the special admissions process that gave magnet-school principals influence in admissions, some community members — including at least one elected official — were upset that there would now be a centralized lottery for students who met the entry criteria. While the lottery is still exclusive (it’s only for students who meet those criteria), it’s a more inclusive process for Black and Latino students who, according to a 2017 Pew analysis, had been more likely to be denied entry despite meeting magnet-school entry requirements. (White and Asian students, on the other hand, were more likely to be admitted despite not meeting those requirements.) Some parents complained in the press that this new process was “unfair” because it would deny their children opportunities that had been promised to them.

It should be noted that racial and socioeconomic demographics at many of Philly’s 37 special-admissions schools — which include Masterman, Central, and Science Leadership Academy — skew disproportionately white and Asian, wealthy and English-speaking.

Translation: We all say we’re for all kids having a chance to succeed—until it’s time to unpack the disparities that continue to prevent this. Even when it comes to elite public schools in our city, the push to deny access and opportunity lingers.

If the students attending Philly public schools are “our” kids, we must be committed to ensuring that all of them are given a fair shot. You can’t speak about what’s “fair” in a system that disproportionately disenfranchises Black and brown students. We’re saying the silent part out loud when we debate about lotteries to get into “good” schools in a public-school district where many schools are failing. More of our resources, focus and attention should be on improving public schools at all levels rather than continuing to push ones that only cater to the most talented.

More of our energy should be spent trying to save the Abbott Elementaries of the city and not furthering a narrative that only an elite few should get to attend private and/or magnet schools. When wealthy celebs try to funnel a select few kids into the problematic private-school system, they’re widening the achievement gap between kids in public and private schools. When privileged members in our community want to keep a biased system that benefits their kids, they’re suggesting that the rest of ours don’t deserve similar opportunities.

We can no longer half-ass our advocacy for public education. Either we’re for it all the way—or not.