Philly's own Quinta Brunson has a big hit on her hands with Abbott Elementary, which is drawing comparisons to The Office. 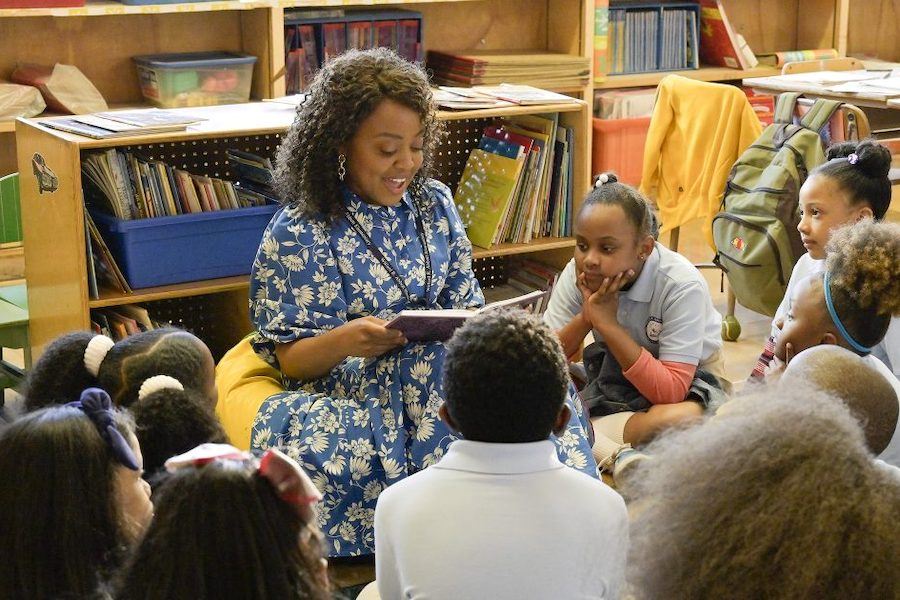 Philadelphia’s own Quinta Brunson in Abbott Elementary (Photo via ABC)

Emmy Award nominations won’t be announced until July, but you can be sure that the new ABC comedy Abbott Elementary, created by and starring Philly’s own Quinta Brunson, will be a strong candidate.

The pilot debuted back on December 7th, with episode two following on January 4th. And the buzz surrounding the show has exploded over recent weeks, with national publications having some very nice things to say about the sitcom.

In its Abbott Elementary review, Entertainment Weekly calls the show a “terrifically smart workplace comedy” that is “in a class of its own.”

Longtime Los Angeles Times television critic Robert Lloyd considered all four new major network sitcoms — Grand Crew and American Auto, both from NBC, Fox’s Pivoting, and Abbott Elementary — and declares the latter “the most buoyant” and the easiest of the four “to recommend to a broad demographic.”

But the real kudos come from the Chicago Tribune. The headline for their review says it all: “Abbott Elementary: Finally a Worthy Successor to The Office.” Well now.

Like The Office (and several other major network shows since), Abbott Elementary is a workplace comedy shot in a mockumentary style. The paper company sales office is replaced by an underfunded and fictional public elementary school in South Philadelphia, where Brunson plays a second grade teacher trying to fix a broken system. It’s her second year of teaching, and she’s been there long enough to discover the harsh realities but not so long that she’s given up hope.

“I’d say the main problem in the school district is, yeah, no money,” Brunson’s character tells the film crew. “The city says there isn’t any but they’re doing a multimillion-dollar renovation to the Eagles stadium down the street from here.”

She’s forced to tape pictures of the post-George W. presidents into a textbook about the presidents, because the textbooks provided to her by the school district are so outdated.

After a student pees on an area rug because the bathroom toilets are broken, she tries to get it replaced but is told there’s no money for a new rug. She finally convinces the school’s out-of-touch and bordering-on-bumbling principal (played by Janelle James, in a role that’s an easy comparison to Michael Scott) to apply for emergency funds to cover the rug and other necessities, but the principal winds up squandering the money. Naturally, an Italian American teacher (Lisa Ann Walter) from South Philly who’s “got a guy” for everything (and who dutifully teaches her students that a hundred-dollar bill is known as a “C-note”) makes a call and a truck magically shows up with a bunch of rugs for all the teachers.

Philadelphians will love that those fell-off-the-back-of-a-truck rugs bear the Eagles logo, because Tony, the guy who brings the rugs, is a worker on the aforementioned stadium renovation. And there are other oh-so-Philly references such as Jim Gardner and Boyz II Men songs.

Though the public school realities presented in Abbott Elementary are, at the end of the day, rather depressing, the show works as a comedy thanks to Brunson’s sharp writing and the terrific ensemble cast, who play a wide range of strong and distinct characters.

There’s the jaded teaching veteran (Sheryl Lee Ralph) who rolls her eyes at any whiff of new teacher enthusiasm and crushes heavily on Jim Gardner. There’s the young white teacher (Chris Perfetti) who regularly embarrasses himself by trying too hard to identify with his Black colleagues, alluding to a trip he took to Africa and making Cornel West references. And, yes, that substitute teacher (Tyler James Williams) who’s being crushed on by the principal and who seems to be crushing on Brunson’s character, whose boyfriend is a boob, is played by the actor who portrayed a young Chris Rock in Everybody Hates Chris back in the mid-2000s.

Though we still have plenty of episodes to watch (the season doesn’t wrap until April), Abbott Elementary works on every level while also shining a light on a problem in desperate need of resolution. And it says something that all four members of my household — my wife, who is a teacher, and both of my Office-loving teenage children — can’t wait to see what happens next.

New episodes of Abbott Elementary air on Tuesday nights on ABC. The show is also streaming on Hulu.