Only somebody born and bred in this area would possibly react this way. 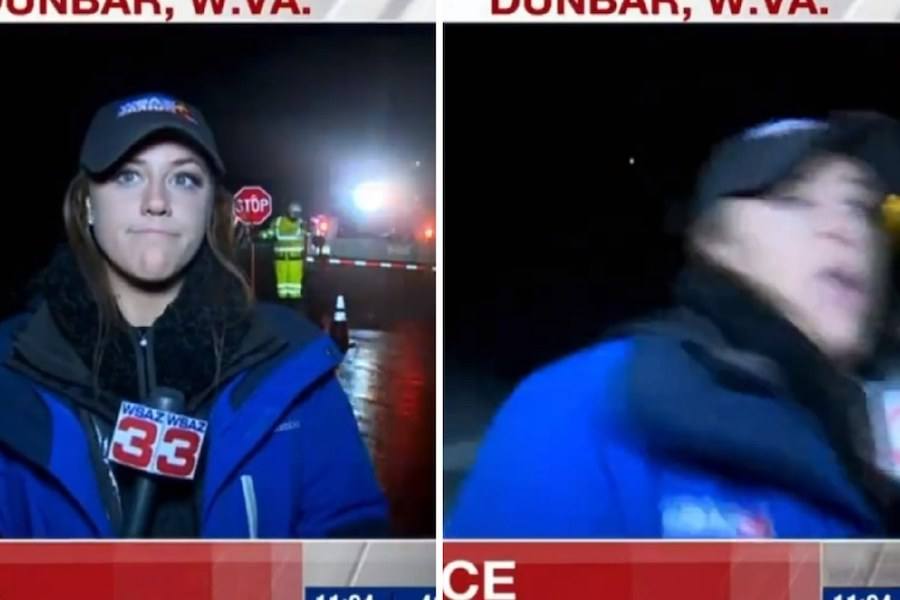 If you’re the type of person who pays attention to viral videos, then you’ve probably seen the one from Wednesday night in which West Virginia TV news reporter Tori Yorgey gets hit by a car during a live broadcast and then pops right back up to finish the job. Naturally, anybody that badass must be from the Philly area, as is Yorgey, so we got her on the phone on Friday morning to learn more. Turns out it’s her last day on the job.

Good morning. How are you doing?
It’s been crazy. This happened on Wednesday night. And it’s just been crazy ever since. And today is actually my last day at the station. I’m going to Pittsburgh.

What a way to go out!
I know, right? It’s like they say: Go out with a bang. It was nuts but definitely could have been worse. We’re all good. Everyone is fine. I don’t think there’s any damage to the camera or car.

Well, thank God for that. We wouldn’t want the camera or car to be injured.
[Laughs] They are all good.

But seriously, how are you feeling?
I have some soreness in my leg and back. But I already feel better today than I did yesterday. I’m golden.

I’ve seen the video 10 or so times. But I’m still not exactly clear about what happened.
I was out there doing a report on the conditions outside, because we were about to get some snow. I heard this water main break happened in Dunbar, so I decided that would be a good element for my story. Something to show, since it wasn’t snowing yet. I parked my news vehicle in an apartment complex driveway exit, off to the side. I wasn’t actually on the roadway. There were a bunch of emergency lights off to the right, and if the woman that hit me was looking at those, she just might not have seen me off to the left.

Oh, so she didn’t lose control on ice or anything like that?
I don’t think so. I think I was just in a spot where she didn’t see me.

And it seems like it all just happened so fast.
I went live and words were coming out of my mouth, and then I just blanked out. I was thrown into the camera. In the moment, I thought she was running me over. It was really scary, and then I think I was in shock. I was shaking. And the woman who hit me was very distraught. So the biggest thing for me at that moment was just letting her and the viewers know I was okay. I didn’t want her to be distraught.

Yes, one of the most remarkable things about the video is how gracious you are with her. And I couldn’t help but notice on an old resume I found of yours that you worked the counter at a Chick-fil-A at the Plymouth Meeting Mall. Since Chick-fil-A workers are so damn nice all the time, I have to attribute your niceness in this extreme situation to the customer-service training you got at Chick-fil-A.
[Laughs] Oh my God. Chick-fil-A was my very first job! But I would have to attribute my reaction to my mother. It’s just one of those things. I can’t even imagine how I would feel if I hit somebody. Everybody has empathy. I know some people might think they would have reacted in some other way.

Right. Some people get tapped on their bumper and jump out of the car and start screaming.
I was just really worried that she was going to freak out.

Another notable thing in the video is just the way that the news anchor reacts — or maybe doesn’t react is the better way to put it — to what just happened to you. I mean, you were hit by a freaking car.
Well, the issue is that he’s looking into the camera, and he would have only seen what had happened if he had been looking at a monitor off to the side. So he didn’t see it, and then he looks over to the monitor and I’m just not in the frame. He was confused and trying to understand what had happened. And he’s getting a lot of backlash, which I hate. The truth is that he’s actually been a work dad to me. He would never not care. He called me right away and has been checking on me ever since.

You also said in the video that this isn’t the first time you’ve been hit by a car.
When I was at Penn State, I was walking home from the library one night past an alley, and this guy just rolled a stop sign. But he was going real slow. This incident was actually much more significant, and I just mentioned the Penn State thing to reassure the woman that it’s all good, that I had been through this before. No big deal.

Since you’re going to Pittsburgh for your next gig, and today is your last day working in West Virginia, I feel like it’s safe enough to ask: Who did you piss off to wind up in West Virginia?
[Laughs] This is my very first market. And this is market 75. In the country, there are 210 markets. And out of college, you are really lucky to make the top 80. Philadelphia is number four. Pittsburgh is 26. So at 75, West Virginia has been a good market for me. A good starter market.

You have a seriously strong Philly accent. Do the people in West Virginia look at you like you have two heads when you open your mouth?
I get a ton of stares when I talk. They know I’m a Yankee, as they say. But they’ve accepted me no matter what. The people out here are really kind and genuine. But actually, normally when I am on the air, I try to hide the accent as best I can. But in this situation, I just couldn’t do it. It just came out.

Finally, I have to say the first thing that popped into my head after watching this video was the infamous Steve Keeley snowplow incident, a story he just can’t escape.
[Laughs] Totally. And actually, I think of Steve every time I’m doing a snow report. That video of Steve always reminds me to take a few steps back. It’s a good reminder.

Well, I’m glad you’re safe. Good luck to you in Pittsburgh.
Thank you. My dream is to eventually work in the Philly market. Come back home. I actually don’t start until February. So I’m going to come home and see my family in Plymouth Meeting, drive back to West Virginia and pack up my stuff. And then I’ll be on my way.

Watch Tori Yorgey get hit by a car on live TV: