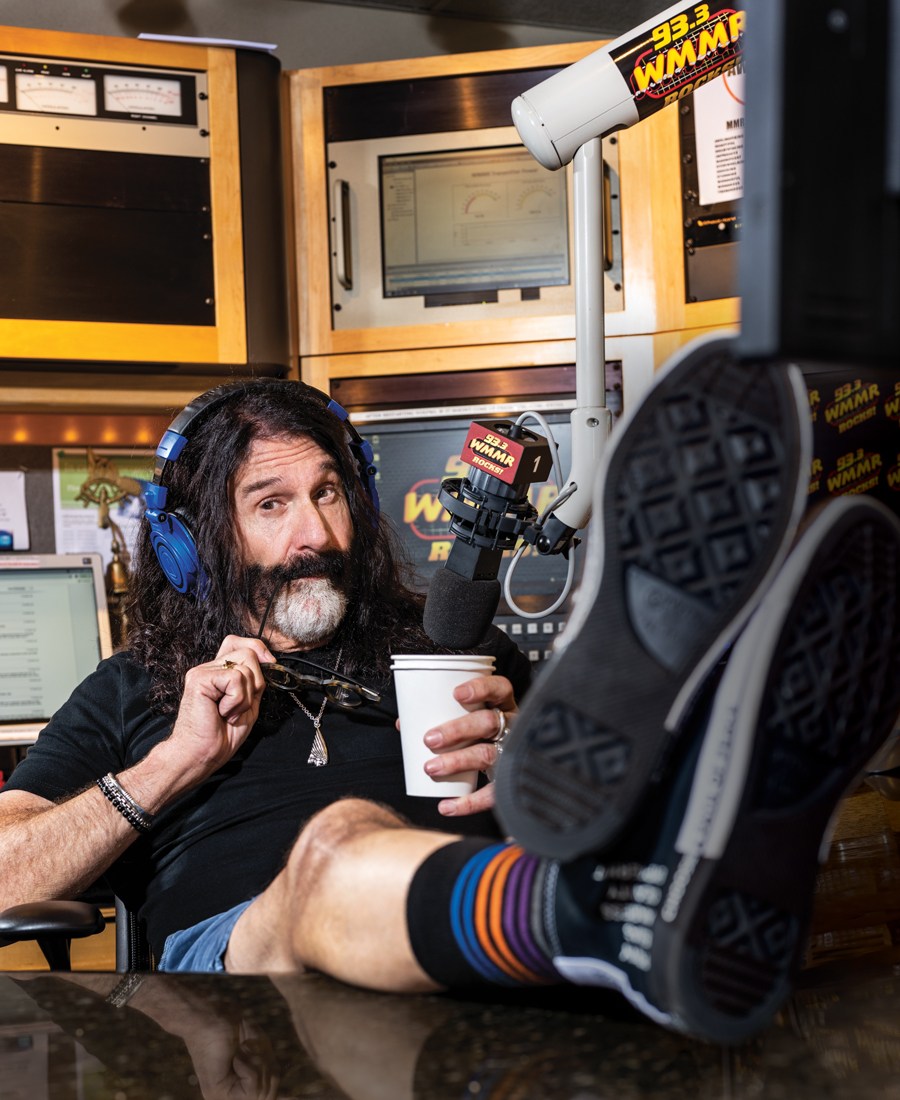 When Pierre Robert took a job at WMMR in 1981, he had no idea that he’d hit retirement age at the same station, playing some of the very same music he played way back then. The Gladwyne resident discusses his favorite place in the city, unforgettable concerts, being Philly-famous, and why he refuses to give Guns N’ Roses any airplay.

I have to commend you on the fact that you’re less than 30 minutes late for this interview. In my experience — ­and I’ve heard this about you from multiple other people — you’re perpetually and egregiously late. What’s with the tardiness?
[Laughs] Somebody once sent me an article about a condition where people always think they have more time than they actually do. I probably have that condition, though I haven’t been diagnosed by any medical doctor, at least not one of any repute.

In all fairness, you texted me that you were coming from your acupuncturist, who was running late herself. Is acupuncture something new for you?
Over the years, I’ve done all kinds of body-alignment-­type things. I have a lot of aches and pains, and I go to acupuncture twice a week. And it really works, though it makes me a little spacey at the end of each session. So I’ve been driving around looking for a cup of coffee so I could be somewhat coherent for this interview. And every fucking place, whether it’s Starbucks or the La Colombe in Bryn Mawr, there’s a line out the door. I’m so desperate that I almost went to the local bagel place. But guess what? A 10-person line out their fucking door. Are you kidding me?

Before we go off on any more tangents, set the stage for me. It’s 1981. You arrive from San Francisco. These days, WMMR is in Bala Cynwyd. Where was it then?
At 19th and Walnut. It took up the entire fourth floor of the Wellington building on Rittenhouse Square. If you come out of the downtown La Colombe and look up to the fourth floor, you can still see a fading but present white ’MMR bumper sticker on the outside of the Wellington. Back then, at least, you could open the windows, and somebody stuck it on the outside of the building.

Was Rittenhouse Square the social gathering place that it is today?
It was and continues to be my favorite place in the region. There’s this peaceful magic dome over Rittenhouse Square. You sit on any given bench and see the world go by, every kind of humanity floating forth in front of you, and there’s something delightful about that.

And what were you playing in those days?
A lot of brand-new rock that’s considered classic today. We had just introduced Abacab by Genesis and Escape by Journey, which, of course, has “Don’t Stop Believin’” on it. And we had just premiered the Rolling Stones album Tattoo You. We somehow got the record before anybody in the entire world had it. So people in Philadelphia heard “Start Me Up” before anybody else.

I know that you lived in the city when you first got here. But you’re in Gladwyne now. Why Gladwyne?
Around 1992, my business manager told me I needed to buy a house. He said I needed to grow up and that I was getting killed in taxes.­ So I started looking around and found this wild house that appealed to my bizarre sense of design, a kind of Frank Lloyd Wright 1950s modern house. And once I got settled, it was easy to stay here.

My impression of the corporate radio business these days is that DJs are told what to play. How true is that?
It’s true at a lot of places. At ’MMR, there has always been extra freedom in varying degrees. On Friday night, Jacky Bam Bam does an all-requests show where you might hear Willie Nelson followed by Slayer. During my show, I take requests, and I have a lot of choices. I call them “left turns.” If something makes sense and I have an instinct to do it, then I do it. And while most stations are fully automated overnight, ’MMR has a real live DJ all night long. That’s very rare.

“During my show, I take requests, and I have a lot of choices. I call them ‘left turns.’ If something makes sense and I have an instinct to do it, then I do it.”

Have you ever refused to play a certain band or song?
I haven’t played Guns N’ Roses since 2002, when they stiffed the Philly crowd. They didn’t show up for their show at what’s now the Wells Fargo Center. And the crowd broke out in a riot.

Oh, I know. I was there, in the third row.
Wow, seriously? I was not. I heard it was crazy.

Indeed it was. My friend and I latched onto a couple of security guards while people were throwing chairs and trashing sound equipment.
And Axl Rose has never really apologized for that. What they should have done was own it and come back and play a free show. But they didn’t. So I won’t play their music. I’d love to interview Axl about it. My terrain is littered with potholes of my various fuckups over the years, but I cop to my own shit, and that’s what you have to do.

So you won’t play GNR because they dissed Philly, which I respect. What about bands and their political or social stances?
Not that I ever played a lot of Kid Rock, but if he had a new song out now, I wouldn’t play it, because of the insulting anti-gay remarks he made fairly recently. And Skid Row, Sebastian Bach. In the ’90s, he wore a shirt onstage that said “AIDS Kills Fags Dead.” A possible runner-up would be Ted Nugent. While I actually like him and have done brief interviews with him — he’s very funny and charismatic — his politics have become even more radically conservative and border regularly on condoning violence in support of his beliefs. 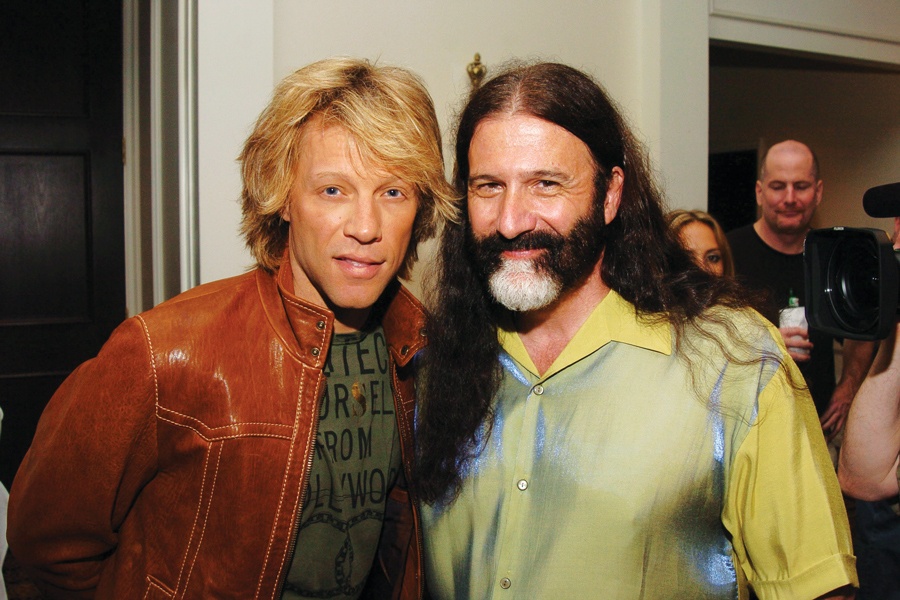 Musician Jon Bon Jovi with Pierre Robert at a reception at the Ritz-Carlton Hotel in Philadelphia in July 2005. Photograph by Theo Wargo/Getty Images

You’re a pretty social guy — a bit of a man-about-town in my observations over the years, whether it’s the bars downtown or all the concerts you go to. So what the hell did you do in 2020?
That was weird. Quite an adjustment. I did a lot of binge-watching. Whatever shows people were talking about. And I love to read books — spy novels, mystery thrillers, sci-fi. Escapist stuff. But staying home on Saturday nights was really hard to get used to. I was always out. And yeah, I would still go out a bit. Taking drinks outside when the bars were closed inside was okay in summer, but it wasn’t so much fun to have a beer that way in February.

Whenever I’ve seen you at bars or shows over the years, there are always people coming up to you to say hello, which really sends my social anxiety needle into the red. Does that ever faze you? Or do you love it?
I think it’s a blessing. It certainly doesn’t bother me in the least. It’s pretty rare for a DJ to be “spotted.” But that’s the way I built my brand. When I first worked at ’MMR, nobody knew who I was. So I’d be out at the clubs where the local bands would be playing — I’m talking about bands like the Hooters, which we had in very heavy rotation at the time — and venues like J.C. Dobbs on South Street and the 23 East in Ardmore, and I would introduce the opening band and the middle band and the last band and then I’d go around from table to table and shake hands with people. And there were so many appearances at shopping centers. And then you have people like Bon Jovi telling me to come out onstage at Vet Stadium. People get to know you.

How many concerts would you say you’ve been to?
Thousands and thousands. When I was a kid, I would go to the casino shows in Lake Tahoe with my parents — ­Sinatra and stuff like that. When I lived in San Fran, it was all the Bill Graham rock shows. And so, so many in Philadelphia, whether I was just going to watch or introducing the show or broadcasting or making some sort of appearance. Philly is one huge concert town. I actually still use this big datebook — one of those huge Franklin Planner kinds of things — with all of the shows in it. The one I’m using now goes back probably eight years. It’s so fat.

And from those 40 years of Philly concerts, can you give me three that really stand out?
Number one is absolutely Live Aid. July 13th of 1985. Number two would be the Rolling Stones at the Tower Theater in 2002. That’s the year that the Stones picked some cities and in those cities did a stadium show, an arena show and a theater show. So in Philly, they did Veterans Stadium, what’s now the Wells Fargo Center, and a few days later the Tower Theater. And third? I’ll have to think about this one. Hmm …

I’m not going anywhere.
Okay, the third show was November 21, 2001. The station threw me a 20th anniversary concert at the Spectrum. It featured David Lee Roth, Fuel, and the return of the Hooters. They had been on hiatus for six or seven years, so it was a big deal to me that this was their first show back.

Finally, I realize that you’ll hit official government retirement age just before this interview lands on newsstands. Is there any guarantee you’ll actually still be on the air then?
I just signed a deal earlier this year for three more years with a possible two-year extension after that, which indicates that I should still be employed when this comes out. Of course, there are no guarantees of anything in life.

Published as “Tuning In” in the November 2021 issue of Philadelphia magazine.