Philly Will Pay $2 Million to Settle a Police Brutality Case. It Will Also Give Cops a Raise. Why?

The new police contract means taxpayers are about to pay even more for bad policing. 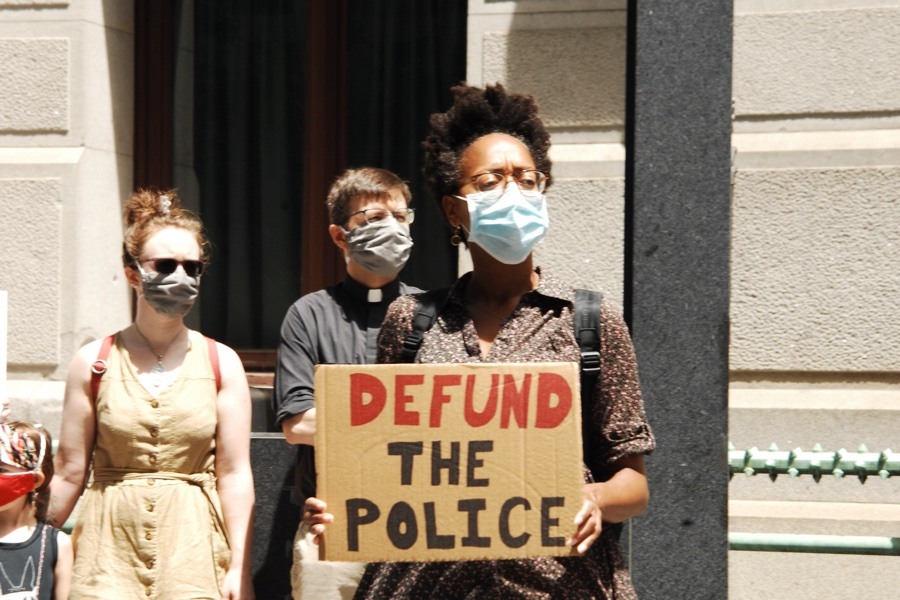 In this photo from June 2020, protesters call for the Philadelphia police department to be defunded. This week, a new police contract delivers significant raises. (Photo by Cory Clark/NurPhoto via Getty Images)

The saying goes “You gotta spend money to make money” when it comes to maximizing budgetary opportunities, but the city has officially proven that it does the exact opposite — spends money to lose money — when it comes to throwing funds at a police department that can’t get its shit together.

On Tuesday, the city announced it would pay $2 million to Rickia Young,  a Black mother whose car windows were smashed by local police who beat her and separated her from her teenage nephew and two-year-old son after she unknowingly drove into the middle of a protest over the killing of Walter Wallace Jr. last October. This seven-figure payout will come from taxpayer money for an act of police brutality that should reopen the debate over how we fund the department.

Instead, police here are getting a new contract that includes raises and other perks while making them only marginally more accountable. On the same day that the public learned of Young’s settlement, we also learned that the local FOP had defeated the city’s effort to mandate that all officers be Philadelphia residents. Even more upsetting, cops still have the exact same rights to arbitration — a measure that’s stymied efforts to sanction numerous officers over the years.

So how does Young’s misfortune connect with this recent police contract?

It’s simple: Although two officers who abused her were fired by the police department, they’re currently not being criminally charged by DA Larry Krasner — and could still easily appeal to be reinstated thanks to this god-awful contract.

So yes, that means the city is shelling out $2 million of our hard-earned money to pay for police misconduct, yet these officers could still get their jobs back. We can blame Act 111, a state law dating to 1968 that dictates an arbitration process when municipalities and their police officers can’t strike a deal at the bargaining table.

“This is not enough, and it’s a beginning, and we’ll continue to make progress,” Mayor Kenney said at a press conference on Tuesday of the gains made in a contract that was determined by an arbitrator. “We still have constraints that are put on us by the state and by state law. What we were able to accomplish within the confines of that state law, I think, is exceptional.”

But in reality, what we were able to accomplish — most notably, increasing how long disciplinary actions remain on officers’ records — is anything but exceptional. Under the new contract, the city will continue to spend money to waste money. Police officers who cost the city millions will still have the same rights to fight to get their jobs back under this contract.

Such incremental progress is a slap in the face to those of us who will continue to pay for incompetence. What I want is for us to start talking about abolition and defunding the police. But the idea of abolition remains as contentious as ever and “defunding” has become a political third rail, while instead, we see the city yet again overfund the police.

Here’s what needs to happen to move the needle forward: City Council must prepare to use its budgetary powers to rein in police department spending next fiscal year, given the increases already granted in this year’s budget and the raises provided in the new contract. State legislators need to push to abolish Act 111 and begin the necessary conversation of holding police accountable (even if a majority of state Republicans might not budge). Perhaps both sides of the aisle can find consensus on the arguably wasteful spending that Act 111 perpetuates via police contracts. And finally, Larry Krasner must file criminal charges against the fired officers involved in Young’s case, to send a clear message that such actions by the police will be taken as seriously as if they were performed by non-cops. It appears that Krasner is leaning against this course of action, telling the press how the case “presents a challenge.” But Rickia Young deserves her day in court, no matter how tough the case would be.

Anything less should serve as a reminder that in Philadelphia, Black lives still don’t matter — and we as a city believe that so strongly, we’re willing to pay millions in taxpayer dollars. It’s time to hold accountable all of the politicians who keep it this way.