Harriett’s Jeannine A. Cook on Her New Collingswood Store and Being a Black Woman in Fishtown

The celebrated bookseller on opening up her new shop, Ida’s, and advocating for her first shop’s namesake, Harriet Tubman, to get a federal holiday. 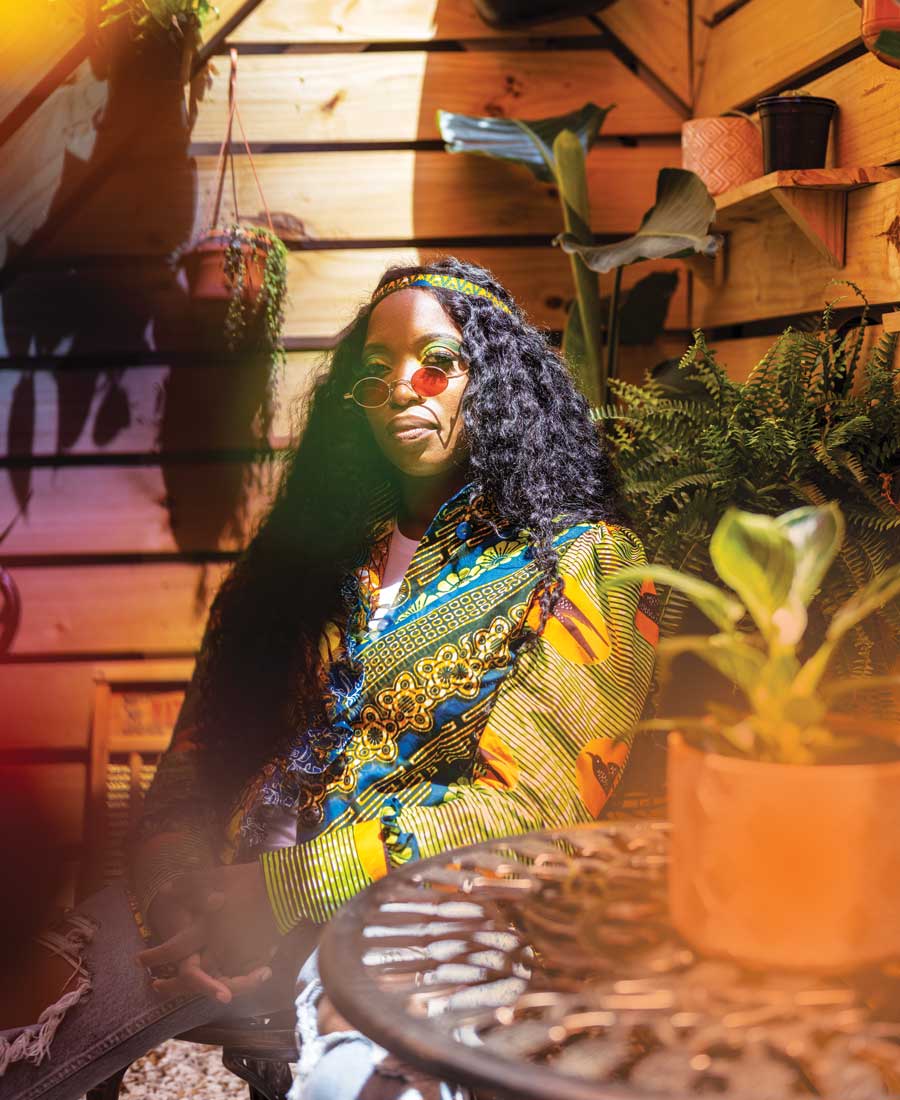 Jeannine A. Cook opened Harriett’s Bookshop in Fishtown just before the pandemic and the racial upheaval. A little more than a year later, she’s expanding Harriett’s and has launched another store, Ida’s Bookshop. She talked to us about selling books, engaging communities, and why she’s worried the nation’s reckoning has lost momentum.

I didn’t realize your publicist set this up as a Google Meet until the last minute. Will we ever get back to, you know, phone calls?
I saw the same thing and literally said to myself, why is this not a phone call?! [laughs] I think we’re all just so stuck in the way we’ve been doing things over the last year.

Congratulations on your brand-new Collingswood bookstore. What can you tell me about it?
It’s Ida’s Bookshop, named after Ida B. Wells. A journalist committed to eradicating lynching. Just yesterday, I had a young man in my store who didn’t know what lynching was. Or that we are still experiencing lynching­ today. Not only with people who are hung from ropes on trees, which does still happen, but there are also lynchings like Trayvon Martin, Walter Wallace Jr. and Breonna Taylor. These are modern-day — ­and, in many ways, state-sanctioned — ­lynchings.

Collingswood seems like a, well, more natural place for a shop like yours, as opposed to Fishtown, where white men with baseball bats took to the streets during the unrest last year.
We’ll get to see just how Collingswood really is. A lot of times, people who claim to be one thing are cloaked in something else. This is a test.

Was Fishtown a test?
Fishtown has been known as one of the most racist parts of the city. Well, why was that allowed? Oh, that’s just the racist part of town — we don’t go there. How about no, you don’t get to be “the racist part of town”? How about that approach? When they brought out those bats, I had friends calling me: Jeannine, this was a terrible decision! It’s not safe! Well, you know what? We’re still here.

Where did your love of books come from?
My mom was a librarian, and she was always adamant about books. She lost her vision, but she continued reading incessantly through audiobooks, and she would have us read to her. And then when I went to the University of the Arts about 20 years ago, I would sit out in front of the school and sell books.

What kinds of books were you selling?
Books the UArts bookstore didn’t have. Books about Black history, Black present and Black future.

How was your UArts experience? I’ve heard such mixed things about the school.
I dropped out at some point during my senior year. I was overwhelmed, living in what I thought was a house I’d refurbish, but what it really was was a house that didn’t have running water or heat.

Did you ever finish your degree?
Yes. I actually ran into one of my professors, who told me that I could do independent study for the last year, and I got my degree. But even during that senior year, I was still living like that. I was using gallon jugs of water to bathe, a kerosene heater.

You’ve received a lot of attention from people who want to support Black-owned and woman-owned businesses. So I wanted to give you the chance to shine your own spotlight on other Black- and women-owned enterprises in the city.
I’m really inspired by the Colored Girls Museum, which is run by Vashti DuBois over in Germantown. And we need to recognize the work of our writers. And the activists. There is no “activist insurance,” even though you are out on the front lines. Harriet Tubman. Rosa Parks — they died extremely poor even though they spent their lives lifting up humanity and battling injustice.

Speaking of your Fishtown store’s namesake, please clear up some major confusion for me, as I am sure our copy editor is going to drill me on this. Her name is Harriet Tubman, one “t” in Harriet. Why do you use two in the name of the shop?
[Laughs] Believe me, you are not the first person to ask. “Harriet Tubman” was a name she took on in adulthood after she escaped from slavery. She could never read or write, so how is it we decided how her name should be spelled? I like having the two t’s. If nothing else, it’s a great place to start a conversation.

Are we actually going to see Tubman on the $20 bill?
Some people think it’s a terrible idea — that it’s blasphemous for her to be on it. This is the same money that was used to pay for humans. This money was part of a system of slavery. And so it’s quite backwards for her to be on the bill. If nothing else, Andrew Jackson’s ass definitely doesn’t deserve to be on there. He was an awful human being.

I saw you circulating a petition online to make a national holiday dedicated to Tubman.
It would be the first federal holiday named for a woman. It’s crazy that this is the case. This is the 21st century! I don’t want to call them out by name, but I went to somebody in the book world and asked them if they would support this idea. But she said no, because she wanted to make Juneteenth a federal holiday. This white woman is telling me no, as if they are mutually exclusive and you can only support one. It’s like saying you can’t support Mother’s Day because there’s a Father’s Day. What the hell?

It’s 2021, and you’re banking on physical bookstores, but I can go online and order millions of different books without venturing into Fishtown or Collingswood. What is the purpose of these stores? Because it can’t just be selling books.
We are a community hub. A secular sanctuary. A place where you can really reckon with your own stuff.

I understand you just went month-to-month at your Fishtown location and are working on purchasing your own property, where you’ll open something a little different.
Harriett’s House. A monument. A teaching ground. A legacy place that explains how she was able to do what she was able to do. And a bookshop. I’m bringing in a historian to make the location historically accurate.

You’re raising money to buy this building on GoFundMe*, and I’ve seen no shortage of criticism of that strategy — people who say things like, Typical millennial. Everybody else saves their money to buy a building. She wants something for nothing. How do you respond to these critiques?
Victor, I don’t respond to them. I never said you have to support it. People choose to support it. If somehow or another they feel connected to what we’re doing and have done and plan on doing, then they can help. And the people who don’t agree? Go on over there. No harm, no foul. Congratulations. You win. [laughs]

What’s the future of the independent bookstore business in America? Do you think we’ll see a lot more shops like yours, or are Harriett’s and Ida’s anomalies?
Hard to say. I do get calls from people across the country who want to know how we do what we do. It would be dope if places like Amazon, Target and Walmart decided they wanted to take their hand out of the book industry. They are incredibly rich. They wouldn’t notice it. This would open up the market a lot for independent bookshops. 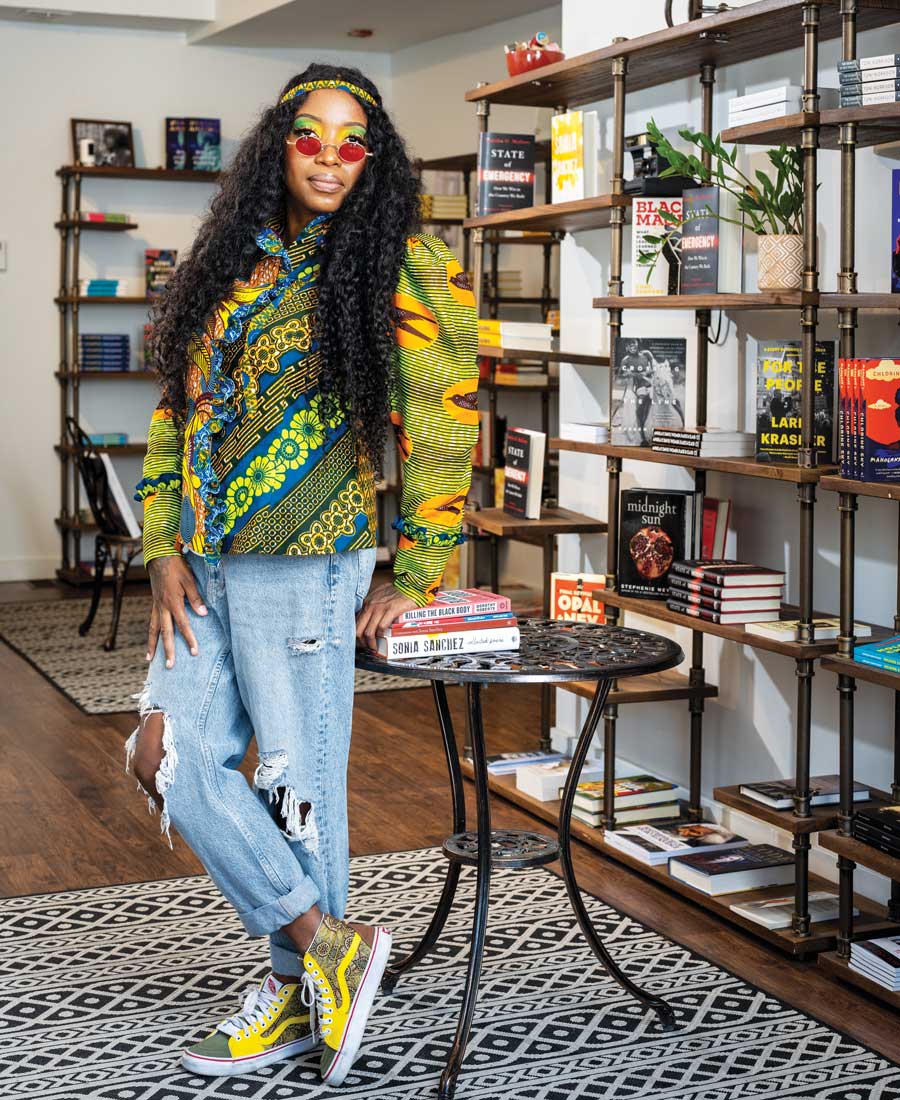 Jeannine A. Cook inside her Fishtown shop. Photograph by Linette & Kyle Kielinski

Have we made any real progress since the murder of George Floyd?
A lot of people have been educating themselves on what the history of the country is, about what they didn’t learn in school, about atrocities that are still occurring. On the other hand, I don’t see real progress among institutions. Oh, they’ll put this letter on social media saying this or that, and they’ll hire a diversity, equity and inclusion person. But to me, all that’s phony. I haven’t seen many institutions take bold moves toward the repair of the harm and the next steps.

Is there one local institution that you want to call out to do better?
UArts. Last summer, they put this statement right out there with everybody else: We stand for Black life blah blah blah blah blah. One of the things I appreciated about UArts is that I always had an opportunity to sit down with the president and express my thoughts and feelings about the Black student experience there. But the current president refuses to speak with me. Oh, you hosted a forum. You sent out a letter. That’s institutional bullshit. He fails to have a conversation with an alum who has shown commitment to the university and who continues to do so. They are fighting the union. The staff there still don’t have a union. They are not supported in any way. This is the same problem. Repeatedly. I don’t need your bullshit statement.

Have we, amid this racial reckoning, lost any momentum since 2020?
Yes. People drift back into their everyday lives. Last year, people were on high alarm and high alert and looking at themselves and the world very differently than now, when people are going back to quote-unquote “normal.” If you feel the urgency to do something, you should do it. You need to recognize that you have a role and responsibility. You need to stand up and do something. Or you don’t. And then you’re complicit.

(*Editor’s note: As part of a promotion, Philadelphia magazine’s business division is donating a portion of subscription proceeds to Cook’s GoFundMe.)