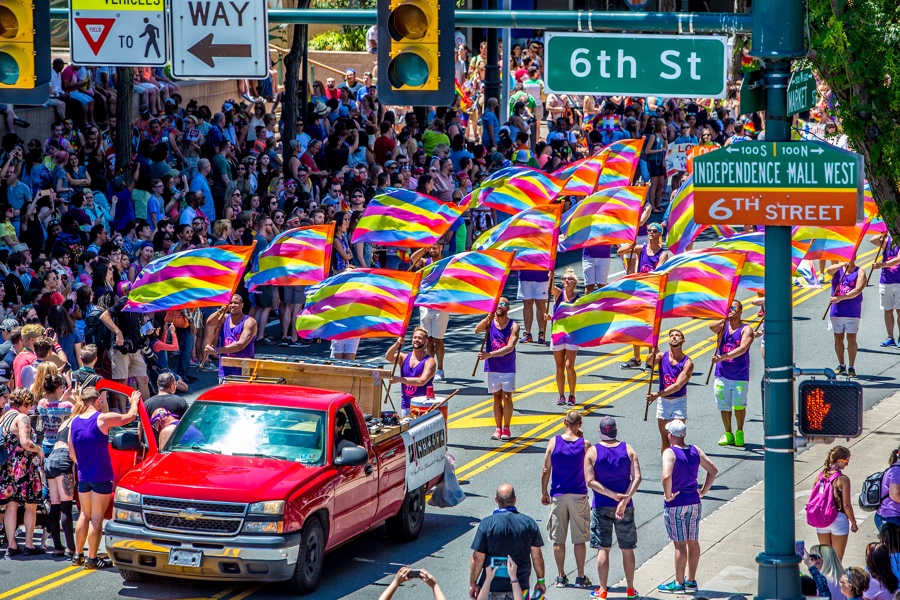 The Philly Pride parade in 2017. Photo by J. Fusco for Visit Philadelphia.

A year ago, racial uprisings across America during Pride Month made LGBTQIA people realize how much work is left to do in our community when it comes to inclusion. Philadelphia wouldn’t have added Black and brown stripes to its revamped Pride flag without the Black and brown activists who fought against Gayborhood racism. But now, the community faces another reminder that progress isn’t coming fast enough: the now-infamous Philly Pride Presents (PPP).

Since 1988, this volunteer-driven nonprofit organization has been hosting the city’s largest and most consistent annual Pride and Outfest parades. But in recent years, Philly Pride Presents has been noticeably out of step with the emerging wokeness of the LGBTQIA community. Lately, it’s been hard to find any reason to be a fan of PPP. This year, the group announced that it was postponing Philly’s June parade until Labor Day weekend due to the pandemic. That was a reasonable decision, but one that’s since been overshadowed by problematic messages the organization keeps posting on (and later deleting from) its social media pages.

During Memorial Day weekend, community members were outraged when Philly Pride Presents posted a “Thin Blue Line“-style American flag with a rainbow replacing the signature blue stripe. The “Thin Blue Line” flag is often associated with “Blue Lives Matter” and has become a symbol of police solidarity and white supremacy. The post received lots of criticism on the group’s Facebook page and was eventually removed. 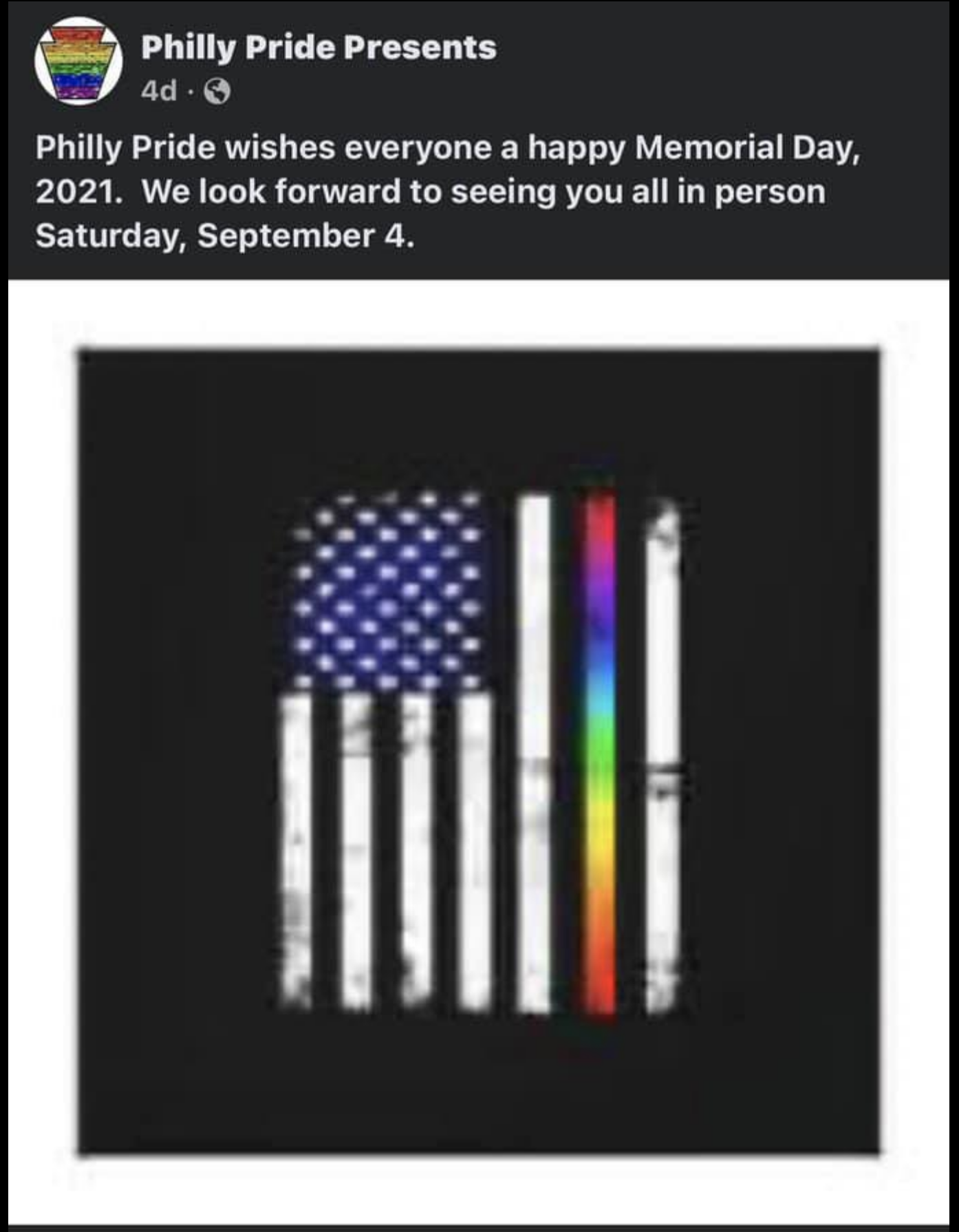 The organization faced further backlash on June 10th when it posted (and later deleted) what many considered a revisionist, racist and transphobic account of the Stonewall Riots that some people felt presented the police as victims and protesters of color as aggressors. “Those dressed as women,” in the post below, were Black and brown transgender women, such as activists Marsha P. Johnson and Sylvia Rivera. History remembers Stonewall as a riot against police harassment and discrimination against LGBTQIA people, primarily those of color who were protesting that night. For Philly Pride Presents to center police in its retelling of this moment was another dog whistle to community members of color that this event wasn’t a safe space for them. 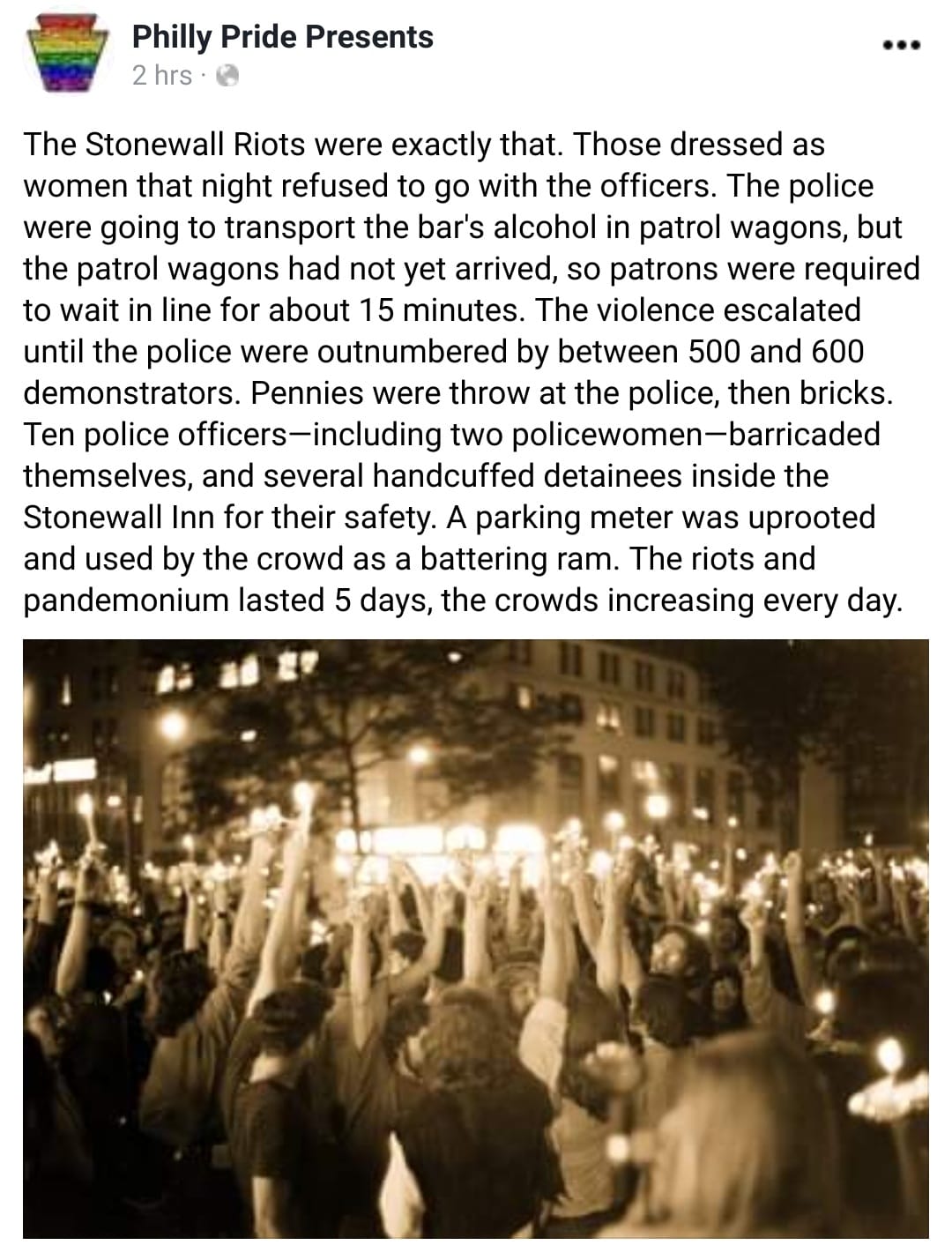 Now, community activists are organizing an event called “Take Back Pride!! PHILLY PRIDE PRESENTS MUST GO!!!!!” Opponents of Philly Pride Presents argue that “from toxic political ties to cops being centered at Pride, PPP has demonstrated that its values do not reflect those of the community.” I couldn’t agree more. As a Black queer Philadelphian who has covered racism in the community for years, I have lost any ounce of faith that Philly Pride Presents, as it is currently led and operates, can represent our community.

The writing has been on the wall for years, but now is the time to cancel Philly Pride Presents.

In 2014, Philly was ranked among the nation’s worst cities in which to celebrate Pride. At the time, community members argued that Philly Pride Presents needed a makeover: lower prices for events, more diversity, a leadership change. But things didn’t change; they actually got worse. In 2016, the organization faced backlash after trying to make the Greater Philadelphia Gay Officer Action League (GOAL) a grand marshal at Pride. That attempt to prioritize police at an event born of protest against police was hypocrisy at its finest. Then, in 2017, it came out that longtime PPP committee leader Chuck Volz was an ardent Trump supporter who was making arguably misogynistic and racist social media posts. The response from Philly Pride Presents was infuriating:

“I can’t tell him what to do with his Facebook,” PPP executive director Franny Price told Philly Voice at the time. “I don’t want to make an excuse, but I know what Chuck has done for the community.”

That was the moment that I, personally, was over Philly Pride Presents. An organization that won’t hold its members accountable for reprehensible behavior is no place for me. It’s clear that the same thing is happening now, and after a year of racial uprisings, the community knows better and should do better. (I’d rather go to these non-PPP events instead.) After announcing her intention to step down as executive director multiple times (and as recently as 2019), Price remains at the helm. The call to dissolve Philly Pride Presents couldn’t come at a more urgent time, as we begin to heal from a devastating pandemic and start to implement the newfound consciousness we’ve attained. A better Philly Pride would be one that is free to the community it claims to represent, that centers the Black and brown transgender people who inspired it, and that eliminates the adulation of police — no question. It would be about fighting for the rights we have yet to win and embracing the most marginalized among us.

Let me know when that kind of Pride Parade is happening, because until then, I’ll be boycotting what’s being offered.