From a drive-in movie to drag brunch to Pride Day at Parks on Tap. 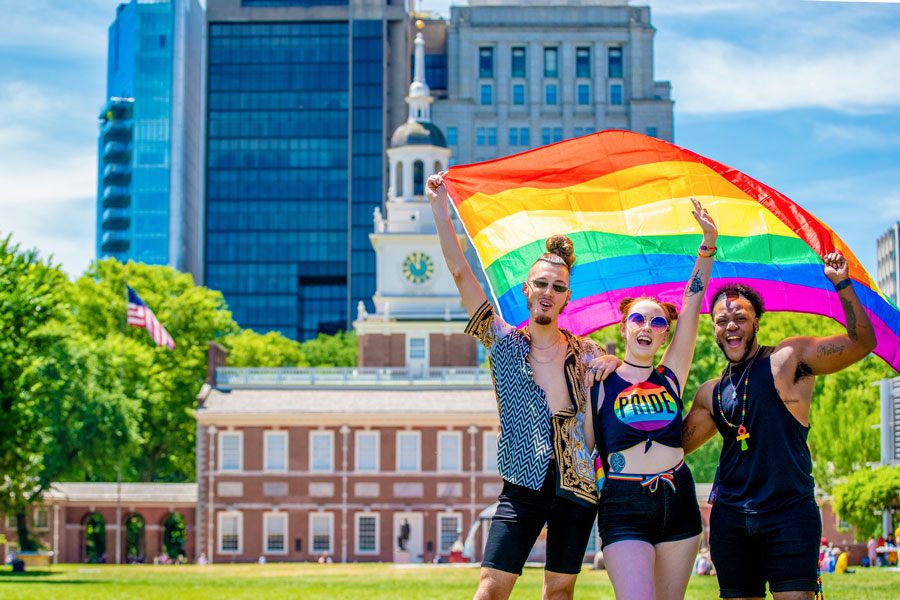 The giant Philly Pride Festival may be postponed, you can still celebrate with these Pride month events in Philadelphia. Photograph by J. Fusco for VISIT PHILADELPHIA

After a nearly 14-month-long pandemic, which limited indoor and outdoor gatherings alike, restrictions are beginning to ease — just in time to celebrate Pride Month. In 2020, events around Philadelphia were either canceled or shifted to virtual platforms in response to the COVID-19 health crisis, but increased vaccination efforts and lowering case counts have made small gatherings and group activities much safer.

June 1st marks the beginning of Pride Month, a time to commemorate the 1969 riots at the Stonewall Inn and celebrate the Pride movement and LGBTQ+ community. While organizers of the annual Philly Pride Festival have postponed this year’s event to September, smaller celebrations are happening all across the city.

From parties and picnics to drag brunches and flower shows, there are plenty of ways to show your love and support for the LGBTQ+ community in Philadelphia this month.

Drive ’N Drag Saves 2021 with RuPaul Drag Race Stars
The queens are coming. And by queens, we mean the fierce divas of RuPaul’s Drag Race. Asia O’Hara, Vanessa “Vanjie” Mateo, Aquaria, Kameron Michaels, GottMik, Rosé and Violet Chatchki are headed to King of Prussia for a drive-in performance guaranteed to leave your jaws on the floor. The two-day event will take place in the KOP mall parking lot, with performances being broadcast live from the stage or via your car’s FM radio. $75, June 11th through 13th, 7 p.m., $75, King of Prussia Mall.

Drag Brunch at The Wayward
Put on your fiercest outfit and get ready to slay at one of the most fabulous brunch events in the city. Hosted by Brittany Lynn, Drag Brunch at the Wayward combines traditional brunch favorites with glamorous performances from local drag stars. $40, June 13th, 10:30 a.m., The Wayward.

Drag Tea at Sofitel Hotel
In addition to raising a giant Gay Pride flag in front of its door on 17th street, the Sofitel Hotel will host a drag tea party to celebrate Pride month. Like an amalgamation of Bridgerton and Pose, the Sofitel is putting an LGBTQ-friendly spin on a time-honored tradition. Drag Tea will of course feature staples like scones, tea sandwiches, and other pastries but attendees will also indulge in performances by Brittany Lynn’s Philly Drag Mafia. $55, June 5th and 12th, 2 p.m., Sofitel Hotel at Rittenhouse Square.

Raising of the Philly Gay Pride Flag
Speakers, community leaders, and LGTBQ advocates will gather at City Hall for the raising of the Philly Gay Pride flag. Philadelphia adopted an adapted version of the flag which includes black and brown colors to draw attention to issues faced by people of color within the LGTBQ community. The event will be free to the public and will also provide an opportunity for city residents to get vaccinated on site. June 11th, 3:30 p.m., City Hall.

TINGS: Femme Identified Group Meetings
To help facilitate conversations about sexual identity, race, and the intersectionality of the two, social justice organization Galaei is hosting a virtual wellness group for queer and trans, Black, indigenous, and people of color (QTBIPOC). The three-week meeting series will focus on ways to increase access to information, sexual empowerment, and methods for combating racism and systemic oppression. No cost, Tuesdays at 5 p.m. starting June 15th, online.

Cocktails for a Cause
If you plan to enjoy a meal at one of Philly’s many restaurants and eateries during the month of June, be sure to visit these participating restaurants to support LGBTQ+ organizations in the city. Lola’s Garden, Juno, Parks on Tap, Morgan’s Pier, Harper’s Garden, Craft Hall, The Garden at Cherry Street Pier and Rosy’s Taco Bar have joined forces to show some love to the city’s LGBTQ+ communities by donating $1 from every purchase of a Pride Month cocktail to four area charities. Ongoing, various locations.

qFLIX Philadelphia: Virtual Gay Pride Film Festival
To Kick off Pride Month, qFLIX Philadelphia is launching PrideFLIX, a virtual Pride film festival showcasing the works of LGBTQ creators. The five-week event invites attendees to view a collection of documentaries, feature films, and web series from the comfort of their homes, with $1 from each purchase benefitting LGBTQ+ non-profits. $7, starts June 1st and runs throughout the month online.

William Way LGBT Community Center: Virtual art Exhibit
Navigating through unforeseen challenges brought on by the COVID-19 pandemic has been difficult for everyone. The William Way LGBT Community Center gathered the works of 28 artists from the Philadelphia area for a virtual exhibit called Moving Forward When the World Stopped: Queer Life 2020-2021, which showcases paintings, portraits, and other artwork that reflect on uncertainties of the life in the pandemic. Free, viewable online now.

Pride Night at The Flower Show
The Philadelphia Flower Show had to change its location in response to the COVID-19 pandemic, but this change came with an opportunity for expansion. The nation’s largest and longest running horticultural event invites guests to explore the newly expanded plant, design, and garden districts as it celebrates Pride Month. $45, June 10th, 10 a.m., FDR Park.

Pride in the Park: Pride Day at Parks on Tap
Parks on Tap is always a vibe, and for the month of June the traveling beer garden is focusing on providing that same energy to members of the LGBTQ+ community. The first-ever Pride on Tap will feature live music from celebrity DJ Robert Drake, food, and of course delicious brews for a family-friendly Pride celebration. June 12th, noon, Parks on Tap Trails End.

Virtual Philly Pride Run
Runners, this one is for you. The William Way LGBT Community Center is bringing back their virtual Philly Pride Run 5k and Fun Run events. Put on your flashiest Pride pieces (rainbow tube socks allowed) and take to the streets of Philly to show your support for the LGBTQ+ community. In order to be eligible for the cash prizes, participants must track their progress using electronic activity tracker apps like Strava or Garmin. $30, June 13th through 20th, location varies.

Women’s Party: Sip City at Cavanaugh’s River Deck
Is it really a Summer in Philly without a visit to Cavanaugh’s River Deck? The restaurant and beer garden is welcoming the return of Sip City Mixer, a happy hour for woman-identified LGBTQ+ community members. The event is free, but donations will be accepted for The Arcila-Adams Trans Resource Center at the William Way Community Center; an organization serving LGBTQ+ Philadelphians. June 11th, 5 p.m., Cavanaugh’s River Deck.

Allyouneedislove Yoga + Beer Event
Breathe, stretch, shake, and quietly rock out to some of your favorite queer artists at Yoga + Beer at Love City Brewing hosted by Turntable Yoga. The outdoor event features music, brews, and of course positive vibes. Guests will take part in a yoga session, then enjoy a beer of their choice (at no additional cost). Yogis of all skill levels are welcomed to attend, just bring your mask, mat, and good energy. $10, June 6th, 10:30 a.m., Love City Brewing.

VERA Pride Showcase
When it comes to celebrating Pride, drag shows are all the rage here in Philadelphia. But if you live across the Ben Franklin bridge in New Jersey and still want to get in on the action, VERA Bar & Grill is hosting their first-ever Pride Showcase with appearances by Ariel Versace of RuPaul’s Drag Race. Don’t forget to rock your best Pride gear because in addition to a fabulous drag show, there will be a costume contest and rainbow-studded giveaways. $30, June 6th, 3 p.m., VERA Bar and Grill.

Cutthroat Queen Competition
It’s like the drag Olympics. Three performers take the stage holding $150 each. In order to walk away with the cash participants must survive a series of drag challenges in a game event called Cutthroat Queens. The last queen standing walks away with the remaining cash and the chance to call herself Miss Cutthroat Queen Continental International Worldwide Extravaganza 2020. $12, June 13th, 8 p.m., Tabu Lounge & Sports Bar.

Gay Men Speed Dating
After being stuck indoors for over a year, your dating skills are undoubtedly a little rusty. Whether you want to find to find a beau or simply looking to socialize with someone other than your pet, Gay Speed Dating is the perfect way to get out and make new connections. $25, June 16th, 7 p.m., Stir.

In addition to the aforementioned ways to let your rainbow flag fly, several Philly-area businesses and organizations are celebrating LGTBQ+ pride all month long: