When Everything Shut Down, Philly’s Black Community Found New, Revolutionary Ways to Convene

When Odunde and the Roots Picnic were postponed, there came a wave of reimagination that, characteristic of our American experience, took the bad and made something new and good. 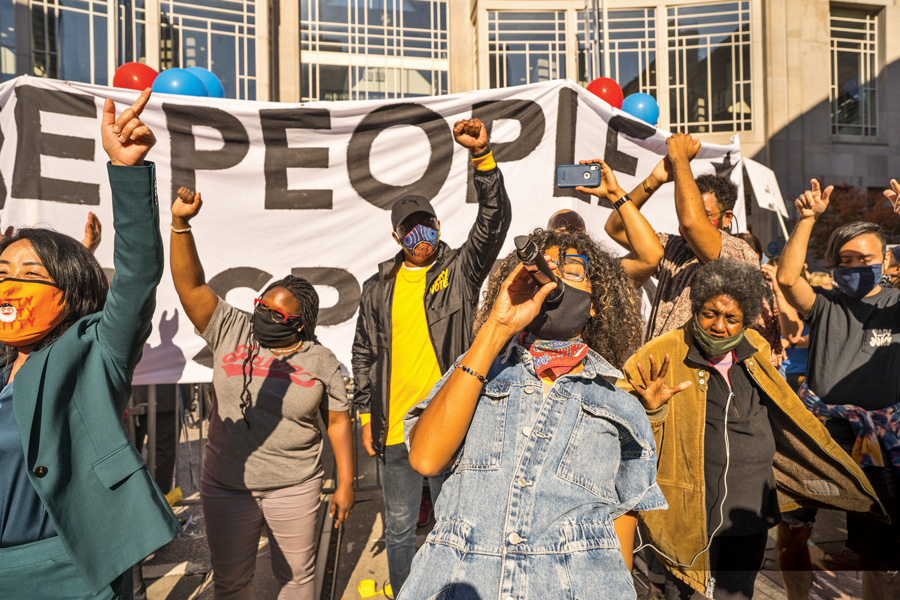 Biden supporters at a Count Every Vote rally outside the Convention Center on November 6th. Photograph by Drew Dennis

When I was a kid, each summer we drove from Trenton into The City. For us, “The City” equaled Philadelphia, which we sometimes called “Philly” when we spoke of it with love. There were the usual trips to the museum and the zoo, the car and flower shows, but a major reason we came was the Odunde Festival. Trenton was Black — plenty Black, in a lot of ways — but nothing compared to the Black density of love and culture that was Odunde. Smiles. Blocks and blocks of Black smiles — greeting each other; eating food on sticks and plates and from a loved one’s hands; selling Black Pride t-shirts and Afro-centric statues.

When I moved here in 2006, Odunde was one of the things that made me feel grounded. You walked that corridor of South Street and felt like someone had bottled all of Black Philadelphia into this beautiful vial. You drank in Odunde, which seemed preternaturally hot every year. Black people with rags wiping their brows.

I moved to the Grad Hospital neighborhood in part because it was once a living Odunde, with corners and corners of Black folks doing their things: food-shopping, church-going, stoop-sitting. School-going, lottery-playing, jump-roping. Windows down on cars; hooting “Hi,” “Alright now.”

But once the pandemic’s social restrictions locked into place, the neighborhood had never felt more bereft of Black community: the gutted Black churches, the gutted Chester A. Arthur School, the literally gutted homes and lots. But Odunde! Odunde — which, yes, has felt the encroachment of Grad Hospital’s aggressive gentrification — felt like it could be a balm. As the weeks dripped by, I started irrationally anticipating Odunde even as other gatherings and events were removed and redefined. Churches and town halls, pickup games, barbershops and beauty salons, all shut down. And then, despairingly, responsibly, Odunde was canceled, too. There was increasingly nowhere for us to gather.

More hits came. The Roots Picnic, a cornucopia of music and culture, did the inevitable and moved online. By August, it felt like the community had been stripped of the old ways of being together. Yet even as many wondered how we’d rebuild, there was a wave of reimagination that, characteristic of our American experience, took the bad and made something new and good. DJ D-Nice’s weekly dance parties and the ever-spawning Verzuz battles lifted us up, became fodder for the joyful water cooler of text threads, Facebook and Black Twitter feeds.

And then — magically, tragically, predictably, phenomenally — June happened. Floyd, Taylor and Arbery happened, and in no time, we found a new way to convene. I stood in a throng of Black and non-white Philadelphians before the Art Museum steps. Smiles. Blocks and blocks, it seemed, of Black and brown smiles, hugging, crying, chanting with beautiful, sometimes hoarse voices. Strangers linked arms, and as we marched from the museum to City Hall to the school district offices, I thought about how so many of those institutions failed us.

In the fall, there were more protests. Walter Wallace Jr. was mercilessly shot and killed in West Philly by police. There were still scores of peaceful protesters, but the gatherings were Blacker, tighter, and just four months later, the national outrage that had awakened Mount Airy and Center City was in nowhere near the same supply.

With the growing concern about unseating Trump, lines of early voters, many of them Black, stretched outside the very places they’d been barred from: churches, rec centers, libraries. It felt, in a way, like that elusive “normal.” Reinhabiting so many spaces we’d lost was a win in itself, but it was also a testament to all the Black community has done to be a force in the city. Here we were, turning the voting lines into civic concerts, with viral videos of Black Philadelphians garnering electric, national applause. At once, it seemed, Black Philadelphia was hailed as both vandal and victor.

Now, spring 2021 is here. In a wedge of breezeway near 10th and South, a Black vendor sells his wares — paintings, t-shirts, posters of household Black faces: Obama, Bob Marley, Martin Luther King Jr. For weeks, months — what’s time? — his displays, which I’d seen for years, hadn’t been there. But a few weeks ago, I saw his makeshift shop open back up. For the first time ever, I stopped and greeted him and another brother, both looking to be in their late 50s or 60s. “What’s good, y’all?” I nodded as they hung up their wares. One brother paused as the other kept setting up shop.

“You already know,” he murmured back.

The world, for good and bad, is reset.

Tre Johnson is a writer whose work has appeared in Phillymag.com, Rolling Stone, the Washington Post, Vanity Fair and more. His first book, Black Genius, will be published by Dutton in 2023.

Published as “After Odunde” in “The City Survives” essay collection in the June 2021 issue of Philadelphia magazine.