Permits, Parking and Kiddie Pools: How to Throw a Raging Philly Block Party This Year

As post-pandemic revelry approaches, what better way to celebrate than with the age-old Philly tradition of the block party? 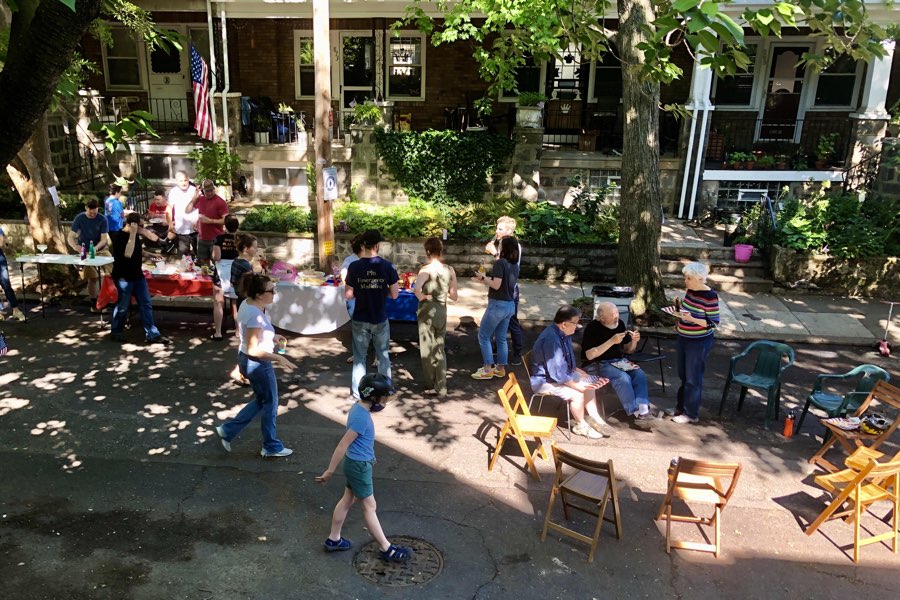 A block party in Fairmount. Photo by Angelica Jaszek

The first mention of the phrase “block party” in the pages of the Philadelphia Inquirer didn’t come until 1902. Once Philly discovered the block party, though, the city clearly became obsessed. By the middle of that decade, the newspaper was covering block parties with so much regularity, it’s a wonder people were able to travel anywhere. “Big Block Party to Raise Funds,” reads one 1905 headline. “Police Did Not Interfere With Big Block Party,” reads another. In 1908: “Donkey Surprise at Block Party.” It would be many years before “Dumpster Pool Party” made its way into a headline — in 2016 — but then, revolutionary inventions don’t come about every day, do they?

With new coronavirus cases dwindling in the U.S., it’s become commonplace to suggest that a period of exuberant (and possibly slightly debauched) celebration will follow — a new Roaring Twenties for our 2020s. There would seem to be no better fit than the block party, with its outdoor, local character. As the New York Times put it in 1923, during the last Roaring Twenties, “The block party is a social phenomenon in Pennsylvania and there it still flourishes.”

These days, there’s plenty a block-party thrower must arrange before taking over the street. So as the calendar turns past Memorial Day to the unofficial start of summer — and the official start of block-party season — here’s everything you need to know about throwing the best post-pandemic block party that ever was.

How to Get an Official Permit

The block-party permitting process is open now on the City of Philadelphia website. (You can also submit a paper application through the mail.) But in order to get your street closure approved, there are a couple of things you need to know.

You must be a resident of the block on which you’re applying to party, and your block can’t be too busy; if your street carries more than 800 cars per hour or serves multiple public transit routes, it’s considered an “arterial” road and is ineligible to host an event. Each block is allowed to host up to five parties per year.

Most onerous is the petition requirement: To officially host a block party, you need to collect the signatures of at least 75 percent of the residents on your block. (One way to make this easier is to compile a directory of the people on your block so you can easily reach them, especially if you’re going to make block parties a regular occurrence.) The good news is that if you want to host multiple parties in a year, you only need to collect signatures once, so long as you have the proposed dates beforehand.

In 2019, the Streets Department granted 3,504 block party permits out of 4,892 submitted. Through April of this year, which represents the most recent data available, the city has received 25 applications and accepted eight. That’s not a number befitting Philadelphia’s block-party stature. With pandemic restrictions lifted, it figures to grow.

All the Fees You Need to Know About

Once you submit your block-party application, your local police district will sign off on the event, followed by the Streets Department. After that, you may need other permits. If you plan to have rides or a carnival, there’s a permit for that. If you plan to charge admission, there’s a permit for that, too. All these ancillary permits are handled through the Department of Licensing and Inspections, reachable at 215-686-2489.

You also need to have a plan for disposing of all trash after your event, assuming you generate enough that you can’t just keep it until your usual pickup day. Fortunately, for just $50, you can hire the Streets Department to come and remove your trash. To do that, call the city at 215-537-2130 — and be sure to give at least five days’ notice.

Speaking of costs, it will run you $25 to hold your party, assuming you get your application in at least three weeks before the date of the party. (For dawdlers, the fee jumps to $60. Weekday parties are also more expensive: $150 per block party.) Once the block-party application is approved by the police district but before it makes its way to the Streets Department, you’ll receive an email with instructions on how to pay the application fee. (Note: If your block party ends up rejected by Streets, the application fee is non-refundable.)

On the day of the party, simply block off the street with any kind of obstruction. Just be sure not to use parked cars as blockades; you’ll need to be able to quickly clear your makeshift “Road Closed” sign in case of an emergency.

If you have other lingering questions, the Streets Department maintains a detailed guide to applying for block parties here.

Okay, I’ve Blocked My Dates and Mobilized My Block. How Do I Make Sure the Party Rules?

To help answer that question, we’ve enlisted block-party impresario extraordinaire Dena Sukol, who in 1998 managed to get everyone on her Fairmount block to support a party and has been throwing them multiple times a year ever since. Here are her best tips.

You’ve been throwing block parties for a long time. What makes for the best parties?
Without question, the most important factor is the willingness of neighbors to move outside their comfort zones. If you’re on a block where people regularly speak together and comfortably relate to each other, you’re halfway home to successful parties. Our block was reserved — polite but not terribly warm. A few of us decided that a Halloween block party would be the way to start turning the block into a warm village. We announced it through fliers we put in everyone’s doors and on their windshields. I had children design the fliers so they looked informal and fun. I don’t recommend using RSVPs — it suggests a more formal mood than we were looking for.

Did you have any particular programming at that party?
I went to the local restaurants, the grocery store, the pizza shop, the framing shop and the flower shop and asked if they were willing to donate a gift certificate to give at our first block party as prizes for things like best Halloween costumes, best house decoration, best bike decoration. Many places will also give a discount if you’re ordering food for the party. 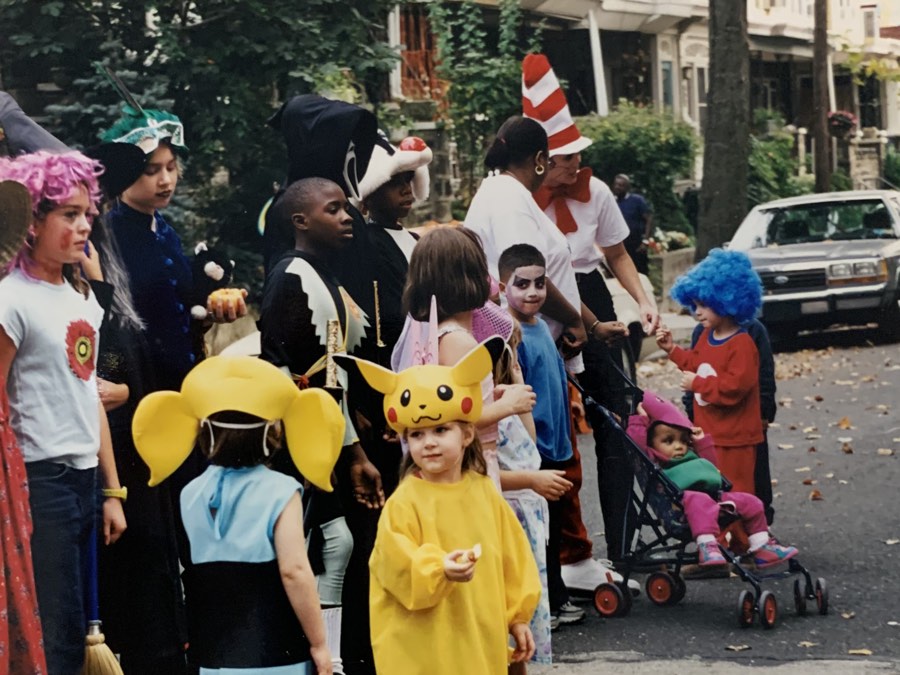 The scene at one of Dena Sukol’s block parties from 2000. Sukol has been throwing parties on her block for more than two decades. Photo courtesy of Dena Sukol

Any tips on how to convince 75 percent of your neighbors to support the party?
The first year was harder, but it got easier as neighbors started looking forward to the parties. We started by splitting our block into four quadrants and had four people take a petition around. At the first block party of each year, we have the petition for the next year’s parties on a clipboard with a pen, and during the party, we get signatures for it. You can sign up and pay for several parties at one time. We now have three to four block parties a year, and we send in one petition to cover them all. Rarely does anyone refuse to sign.

How about tips for navigating the city bureaucracy and getting the official permitting completed?
I have always handled it by mail with one petition. I’ve asked for and received the maximum amount of time allowed: 8:30 a.m. to 8:30 p.m. In 23 years, the police have only visited once on a party day and asked to see the permit.

How do you handle invites?
We want neighbors to feel free to invite friends and family, but basically, we have been interested in building a cohesive block — a little village, a way to make the street feel like a communal living room, with a sense of intimacy. Because of that, we haven’t sought lots and lots of people. Other blocks might want or need block parties to accomplish something different. 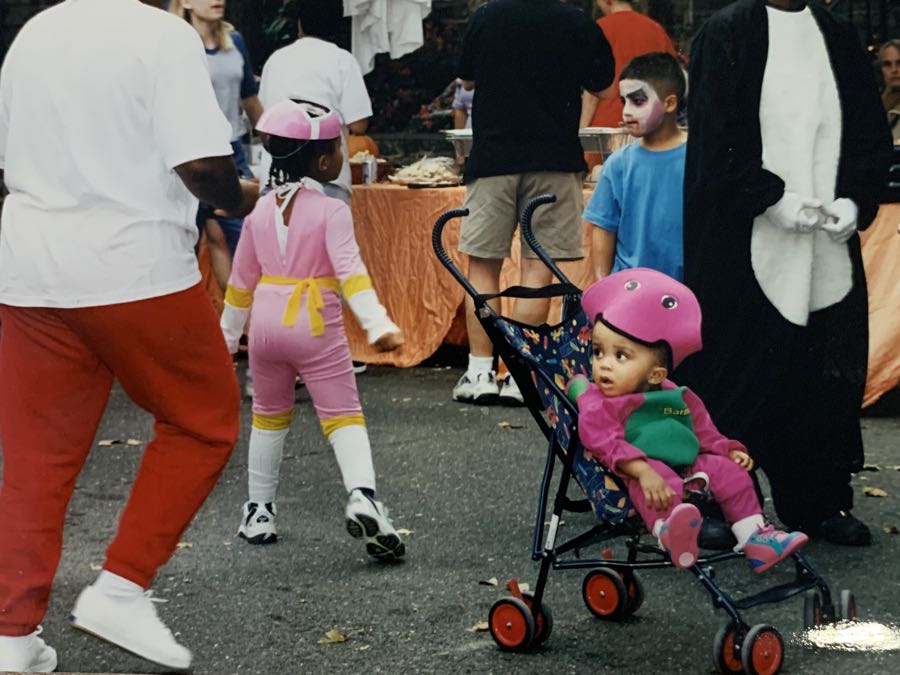 A Philadelphian learning early about the joys of the block party. Photo courtesy of Dena Sukol

How does the day usually unfold? Are you out there all day long?
We close the block at noon, using sawhorses that one of the neighbors has. Our fliers, put in house doors earlier in the week, ask neighbors to move their cars and help clean the street around noon. Over the years, we’ve found that people tend to come out around 3:30. That gives us time to move cars and set up our tables, the coolers with ice, kiddie pools and water sprays, speakers for music, a whack-a-mole game, a ping-pong table and trash pails.

Do you ever book outside entertainment, or is it all DIY?
We’ve usually made our own entertainment. However, for several years, one of our neighbors who had a band very graciously played, and it was a huge hit. Always ask if anyone has a band that would be available at a price that’s affordable for the group. And for cheap fun, no matter what kinds of toys I’ve bought for the kids, the thing they love most is making up their own games and playing in the street.

We have also hired face painters from time to time. That went over big. And we’ve purchased small pumpkins and crafts for pumpkin decorating for the Halloween party. Kids loved it. At the beginning, we had races where you balance an egg on a spoon, which was fun but a pain to clean up. The kids are quite happy left to their own devices, allowing for a bit of relaxation for the adults.