Where Are Philadelphians Flying to Now? Florida, Florida and … Florida

Among booked and searched travel, Florida reigns supreme as a preferred destination. Meanwhile, European hot spots like London and Paris are lagging far behind (for now). 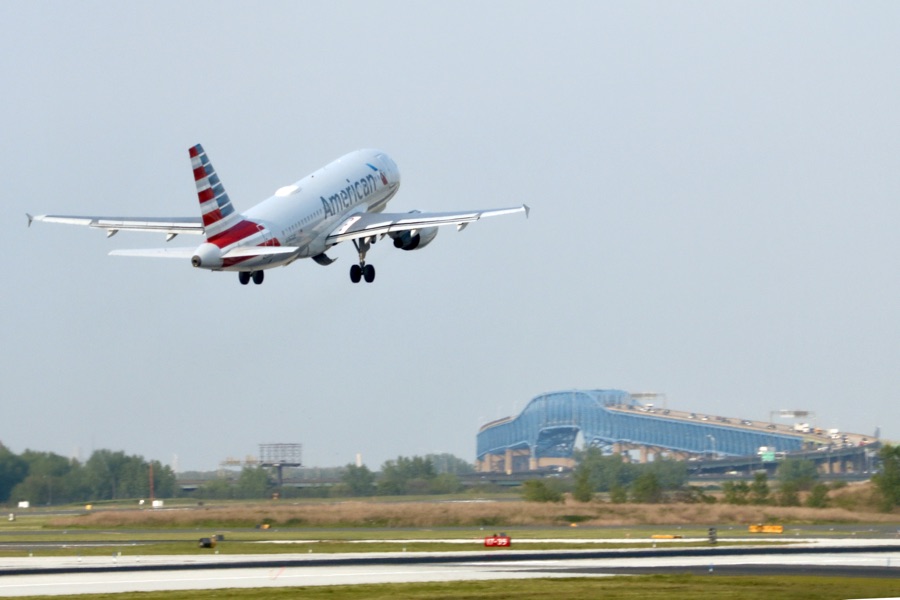 A plane takes flight from the Philadelphia airport, probably headed to Florida. Photo by Daniel Slim/AFP via Getty Images.

After a year spent mostly at home, Philadelphians are finally starting to think of traveling again. No wonder. Even the best view from your home-office window gets old eventually. Plus, with vaccine appointments plentiful, it’s possible to not just fantasize about travel, but to actually book it. And not only to places a road trip away — foreign countries are signaling they’re open to welcoming American travelers during the summer months. Already, the number of daily travelers screened at the TSA is rising, up to more than a million people per day. (That’s still down significantly from the roughly two million daily travelers seen during this period in 2019, but it dwarfs the tally from late April of last year, which hovered around 100,000 per day.)

But where are people traveling? Here’s what the data shows, according to PHL International and the online flight-booking service Hopper.

Where People Are Booking

Considering that personal savings are near record highs and quarantine exhaustion doesn’t lag far behind, one might suspect that people are eager to splurge on visits to the great cultural treasures of the world that have been off-limits for so long.

And that’s exactly what people are doing … if your definition of “great cultural treasures of the world” is the state of Florida. According to Hopper, Miami, Orlando and Fort Lauderdale were three of the top 10 most-booked destinations from Philadelphia in the past month on the site, comprising about 25 percent of all flights booked during that period. 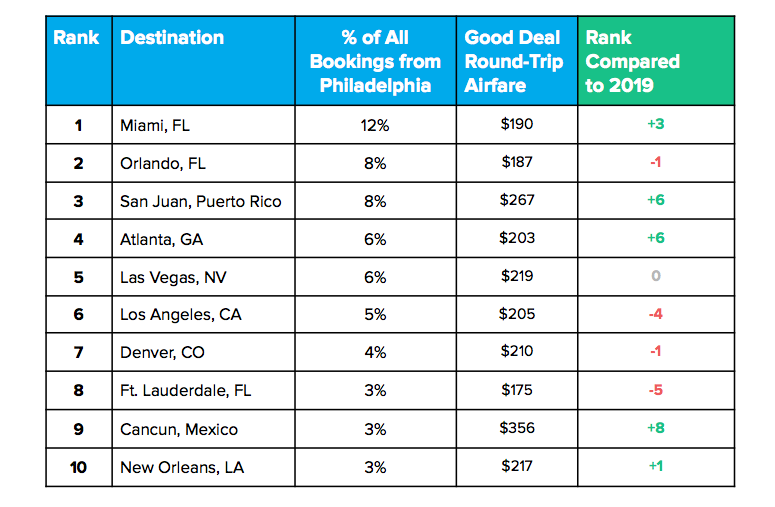 The most popular booked flights on Hopper from Philadelphia over the past month. Image courtesy of Hopper.

This high ratio of Florida travelers more or less tracks with normal flight-purchasing behavior: In PHL’s list of the top 10 destinations from 2019, Florida claimed four slots, with Orlando in first place. This year on Hopper, San Juan, Puerto Rico, is the third most-popular destination over the past month — up from ninth place this time in 2019 — and Cancun, Mexico, the only international city on the top 10 list, is ninth most popular, up from 17th two years ago.

Even as the urge to travel grows, the airport is reporting much smaller travel volumes. The month of February saw 375,000 travelers depart from PHL, down from a million in 2019. Even if the airport hits its highest traffic projection for the month of June — one million passengers — that would still be just two-thirds of the 1.5 million passengers who traveled in June of 2019.

Stephanie Wear, director of cargo services at PHL International, suggests that part of the drop could be due to the near-total evaporation of business travel. Travel on Monday through Wednesday is down compared to 2019, whereas the more common leisure travel days of Thursday through Sunday are up compared to the same period. In addition, typical business destinations like Boston and Chicago fell off the list of top destinations in 2020, and they aren’t on the list of most-searched destinations this year, either.

Where People Are Searching

Because people tend to book travel just a few weeks ahead of time — even more so this year than others, thanks to the uncertainty surrounding the pandemic — booked flights aren’t always the best way to capture where people are planning to go. For that, you need to track searches, which Hopper does, compiling travel queries made not just made on its site, but across the entire internet.

The picture looks … more or less similar. Florida still claims four of the top 10 most-searched destinations. San Juan (top of the list) and Cancun remain the only two non-contiguous-48-states destinations.

But what about Europe, which had been the most popular destination abroad for U.S. travelers that isn’t Canada or Mexico? The most-searched European destination right now is Dublin, all the way down in 38th place overall. London, which was 12th-most-searched two years ago, is now in 39th place. And Paris has dropped 48 slots, from 28th to 76th.

But that doesn’t mean European travel is off the table this year for good. “This is changing every day,” Hopper economist Adit Damodaran says of the interest in European flights. Right around the time Hopper pulled its data for us, European Commission president Ursula von der Leyen told the New York Times that the E.U. planned to welcome vaccinated U.S. visitors this summer. Soon thereafter, Damodaran says, searches to European countries jumped 47 percent. “That shows there is still demand for flights to Europe,” he says.

When People Are Traveling

While domestic flights usually are booked an average of about 50 days in advance, this year, people are purchasing with about 10 days’ fewer notice. International travel has seen a similar shift toward short-notice trips, according to Damodaran. “There’s still a little bit of uncertainty about how the rest of the year will shape up,” he says — which may help explain why there are still relatively few bookings to usually popular European destinations. People are holding off on booking for now.

Most popular Philadelphia travel dates in 2021 so far. Courtesy of Hopper.

So far this year, Hopper’s most popular Philadelphia booking period was in mid-March. Translation: spring break. Going forward, most flight searches are clustered around Memorial Day and the Fourth of July. The flights may not have been booked just yet, but the searches suggest that will change soon.

So yes, people are traveling again. Maybe not in quite the same numbers as before the pandemic, and not always to the usual destinations, but you can be reasonably assured of this: If you do travel this summer, you’re probably not getting an empty middle seat next to you.