William Penn Only Spent Four Years In Pennsylvania, And Other Strange Founder Facts

The rest of the time, he was busy being accused of starting various riots, shopping for fancy clothes in Paris, and getting in trouble with the authorities. 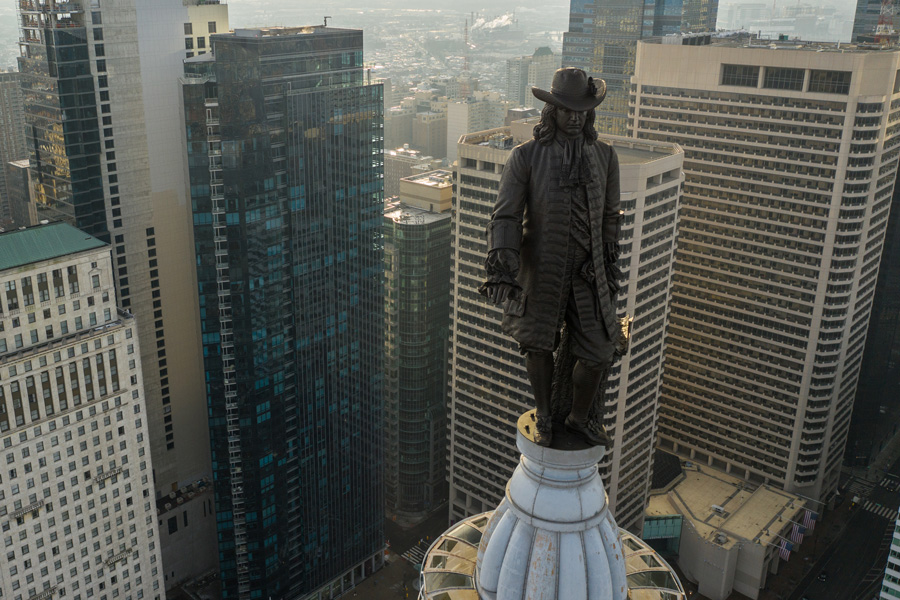 The statue of William Penn atop City Hall. Photograph by felixmizioznikov/Getty Images

This month marked the 340th anniversary of a rather momentous occasion for Philadelphia. March 4, 1681, was when King Charles II of England granted one William Penn a charter for a vast stretch of land in the New World as repayment for a debt the king owed Penn’s father. The charter made Penn landlord over 45,000 square miles of territory — he instantly became proprietor of the largest privately held tract of land in the world — on which he intended to found a new province in which Quakers, the outlaw religious sect to which he belonged, could live according to their consciences.

He wanted to call his utopia “Sylvania,” meaning “woods” in Latin, but as every local schoolkid learns, King Charles tacked a “Penn” onto the name in honor of Penn’s dad. As it turns out, the relationship between William Penn Sr. and Jr. was … let’s say complicated. Here’s some info about Pennsylvania’s founder that you might not have learned in school.

1. His mother was the subject of a lot of nasty gossip

Penn was born on October 14, 1644, to Admiral William Penn Sr. and his wife, Margaret Jasper, a highly religious widow of either Dutch or Irish heritage. (It’s debated.) The famed diarist/gossip Samuel Pepys, a neighbor of the Penn family, described her in 1664 as “a well-looked, fat, short old Dutchwoman.” He also, in gentlemanly fashion, noted that when Margaret first married Penn, she was “a dirty slattern with her stockings hanging about her heels.” According to a 1974 biography by Hans Fantel, Pepys attempted to seduce both Penn’s mother and his sister, which might account for his ill humor. Be careful of your neighbors, friends.

2. Paris was a punishment

William Penn Jr. was well educated and enrolled at Christ Church College at Oxford, but he proved a bit headstrong and was soon expelled for “rejecting the surplice and rioting in the quadrangle,” whereupon his father beat him with a cane and tossed him out of the house. Margaret was able to effect a peace, but the family sent its scion to Paris in hopes that exposure to a foreign culture would do him good. It did, sort of; he developed a taste for fancy dress that would stick with him even after he became a Quaker. He also, in his youth, wrote a poem called “Ah, Tyrant Lust.”

3. He found his purpose in a pandemic

William returned home to an England wracked by the Black Death, and the scale of suffering proved sobering to him. He managed to avoid the Great Fire of London in 1666, but all in all, life was looking rather grim. King Charles was cracking down on religious dissidents, meaning anyone who wasn’t Anglican, and the recently founded Quakers were particularly persecuted, blamed for, among other things, that accursed plague. William studied law for a bit before he was sent to manage the family’s estates in Ireland, where he again encountered Thomas Loe, a Quaker itinerant preacher he’d known in his youth. Impressed by Loe’s words, Penn, then 22, decided to join the radical religious sect. He would be imprisoned four times for stating his beliefs aloud and in his writings, including on charges of inciting a riot. While a prisoner in the Tower of London in 1668, he wrote his most famous work, No Cross, No Crown, which condemned the frivolity of Restoration life and argued for the Quaker virtues and social reform.

Penn’s conversion enraged his father, who threw him out again and withheld his inheritance. Quaker families took him in, and he became a close friend of Quaker founder George Fox. In 1670, Penn was arrested for violating an act that prohibited religious gatherings of more than five persons belonging to anything but the Church of England. He begged his elderly father not to pay the fine that would release him, but the Admiral, impressed at last by his son’s integrity, did so anyway. Penn’s inheritance was reinstated, he was released from jail, and his father, just before dying, secured a promise of protection for him from Charles II and Charles’s brother, the Duke of York. It was to those two royals that the younger Penn proposed a solution to the growing religious unrest in England — a new American colony that would take in a massive exodus of English Quakers. Somewhat to Penn’s surprise, they agreed and signed the aforementioned charter.

4. At first, he was only in Pennsylvania for two years

To attract Quakers as well as members of other minority religious sects, including Mennonites, Catholics and Lutherans, Penn indulged in some creative advertising and marketed his project throughout Europe. He also wrote up a legal framework for his grand experiment, laying out the structure of the government and laws of behavior, which included prohibitions on drinking and swearing as well as on such diversions as theater, gambling and cockfighting. Damn. He also laid out a plan for his province’s “greene country town,” Philadelphia. The main streets were named for trees — Walnut, Chestnut, Locust, Spruce, Pine — because the province was Sylvania, the woods. Get it?

From 1682 to 1684, Penn was actually in Pennsylvania, and it was during this period that much of what we do learn about him in school — his peace treaty with the Lenni Lenape beneath the famed elm tree at Shackamaxon; his insistence on fair treatment (well, comparatively) of Native Americans; the building of his home, Pennsbury Manor, along the Delaware — took place. Although Penn planned to make Philadelphia his home, he returned to England to appeal to the king in a long-standing border dispute with Lord Baltimore. It would be 15 years before he returned.

5. He stayed away for 15 years, and then moved back for … two years

Those were a miserable 15 years for Penn. His patron, Charles II, died and was succeeded by the former Duke of York, James II, who was speedily deposed and replaced by William and Mary. Penn was denounced as a traitor and imprisoned again. He discovered that his agent — a fellow Quaker! — had defrauded him and nearly cost him his Pennsylvania lands. His wife died, as did his young son Springett. His eldest son, William Jr., to whom he intended to leave the governance of Pennsylvania, was proving a disappointment, a dissolute gambler who would eventually renounce Quakerism for the Anglican Church. It wasn’t until 1699 that Penn returned to America, with a new wife, Hannah Callowhill Penn, who was eight months pregnant, and their young daughter. They didn’t stay long.

6. Seriously, he spent only four of his 74 years in Pennsylvania

Drawn back to England in 1701 by his legal woes, Penn was confined to debtor’s prison. In 1712, he suffered a debilitating stroke from which he never recovered; he died, penniless, at the age of 73 in 1718. But he’s not forgotten! The Quaker Oats Company used him as the model for the dude on its boxes. (Seriously; a 1909 advertisement notes, “We will keep faith with you as the Quakers of old kept faith with the Red Men.”) And a 37-foot-tall statue of Penn by Alexander Milne Calder famously tops our City Hall, built in the late 1800s. A gentlemen’s agreement prohibited the construction of any building taller than Penn’s hat in the city — an agreement violated by the construction of One Liberty Place, finished in 1987. This brought down a 20-year curse on the city’s sports teams that didn’t end until a replica statuette was attached to the highest beam of the new Comcast Center in 2007, whereupon the Phillies won the 2008 World Series. A similar figure was installed atop the even taller Comcast Technology Center in 2017; the Eagles shortly thereafter won the Super Bowl. Penn would have been appalled by the superstitions involved — and, we hope, amused by his mini-me’s.