The First White House Was Right Here in Philly

The President’s House was home to two presidents — and lots of history. 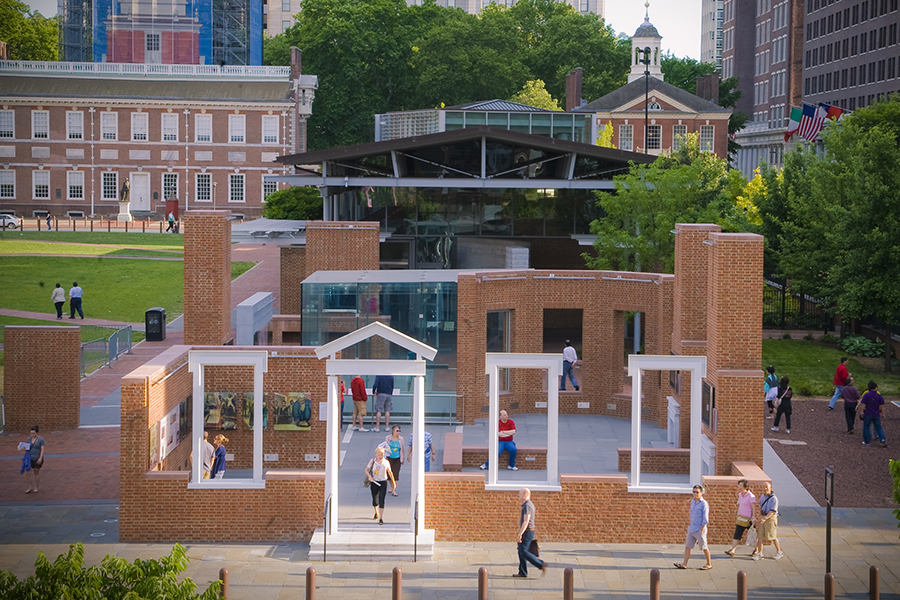 This coming Monday is Presidents’ Day, a weird hybrid holiday that used to be just Washington’s Birthday, celebrated on February 22nd, but got moved to the third Monday in the month in 1971 by the Uniform Monday Holiday Act, as a sop to the working classes in the form of more three-day weekends. Officially, the occasion honors the accomplishments of all of America’s chief executives (note the s’), but seeing as ol’ George was first in war, first in peace, and first in the hearts of his countrymen, we’ll use it to examine the unlikely history of his abode here in our fair city, known as the President’s House (note the ’s).

The structure now known as the President’s House stood a block north of Independence Hall (which was then called the Pennsylvania Statehouse) at 6th and Market streets and was erected circa 1767 by Mary Lawrence Masters, the widow of one William Masters, a guy who helped found what would become the University of Pennsylvania. The widow was extremely rich, and the home she built for herself and her family was one of the largest in the city at the time. In 1772, when her daughter Polly married Richard Penn, governor of the colony and the grandson of William Penn, Masters thoughtfully presented the house to them as a gift.

Relations between America and Great Britain at the time were strained, and the Penns and Polly’s mother withdrew to England for the duration of the Revolution, throughout which their home was occupied by General Sir William Howe, who commanded the British land forces during the war. Howe cooled his heels comfortably there while Washington was shivering through the winter at Valley Forge. After the British evacuated the city in 1778, the house was the domicile of another familiar historical figure: Benedict Arnold, who’d been widowed and subsequently married Peggy Shippen—not, alas, the “and Peggy” of Hamilton. One of Arnold’s love letters to his 18-year-old bride was a word-for-word copy of one he’d sent to another woman six months earlier. The cad.

“The Best Single House in the City”

George Washington lived and worked in the residence from 1790 through 1797, while the nation’s capital was in Philly. He considered the three-story brick home “the best single house in the city.” In residence there, he signed into law the amendments that make up the Bill of Rights. His household consisted of some 30 family members, staff and servants, including nine enslaved Africans. While Washington would free enslaved household members in his will, he also signed the 1793 Fugitive Slave Act, which made it easier for slaveholders to track down and capture escapees in free states. In accordance with that law, Washington rotated the enslaved people to and from Mount Vernon so they wouldn’t live here for more than six months at a stretch, which would have allowed them to take legal steps to become free. Interesting note: That “first in war” quote is from a eulogy for Washington written by General Henry “Light Horse Harry” Lee, the father of Robert E. Lee. Lee wrote the eulogy while staying in a boardinghouse that had once been Franklin Court, the home of Ben Franklin.

John Adams and his wife, Abigail, moved into the house upon his election to the presidency in 1797, with a smaller staff and a decidedly less busy social schedule. Upon Washington’s death in December 1799, they did host a gathering for more than 100 mourners. When the capital was moved to Washington, D.C., in 1800, they left Philadelphia and in November occupied the newly constructed White House, where every future president would live.

In Philadelphia, meanwhile, the President’s House underwent a series of transformations, first to the Francis’s Union Hotel, then to a boardinghouse, then to a variety of commercial properties. In 1832, it was (mostly) torn down, and three narrow stores were built on the site; the neighborhood was becoming the city’s commercial core. One still-extant party wall was eventually shared by renowned merchant John Wanamaker’s first enterprise, a store called Oak Hall. For more than 30 years, Wanamaker (somewhat disingenuously) advertised that his store stood on the exact site of “Washington’s White House.”

In 1935, what remained of the house was demolished; in 1951, the entire block was torn down for the construction of Independence Mall. A public toilet was built on the site and remained until 2003. In 2002, the park service announced a plan for a single sign to mark the former site at the entrance to the new Liberty Bell Center.

But excavations for the center revealed the footprint of the house and outbuildings, which set off a furor over whether, and how to, acknowledge that the Father of Our Country had enslaved persons living there. Historians, activists, government figures and private citizens all weighed in; one prominent voice was that of Michael Coard, a founding member of the Avenging the Ancestors Coalition. In a speech at the 2010 opening of the $11.2 million educational exhibit erected at the site, “President’s House: Freedom and Slavery in Making a New Nation,” Coard noted that there were those “who complain that slavery is too prominent and too conspicuous in this project.” His answer to such critics: “It is so prominent and so conspicuous because slavery totally permeated the President’s House.” Exhibits today tell the stories of Washington’s home in Philadelphia and of the nine enslaved persons — Oney Judge, Moll, Austin, Hercules, Richmond, Giles, Paris, Christopher Sheels and Joe —  who lived there with him. The exhibit was the nation’s first federal commemoration of slavery.