His complaints are not without a tinge of irony, since Milou once found himself in trouble over a painting inspired by a Pope Francis photo. 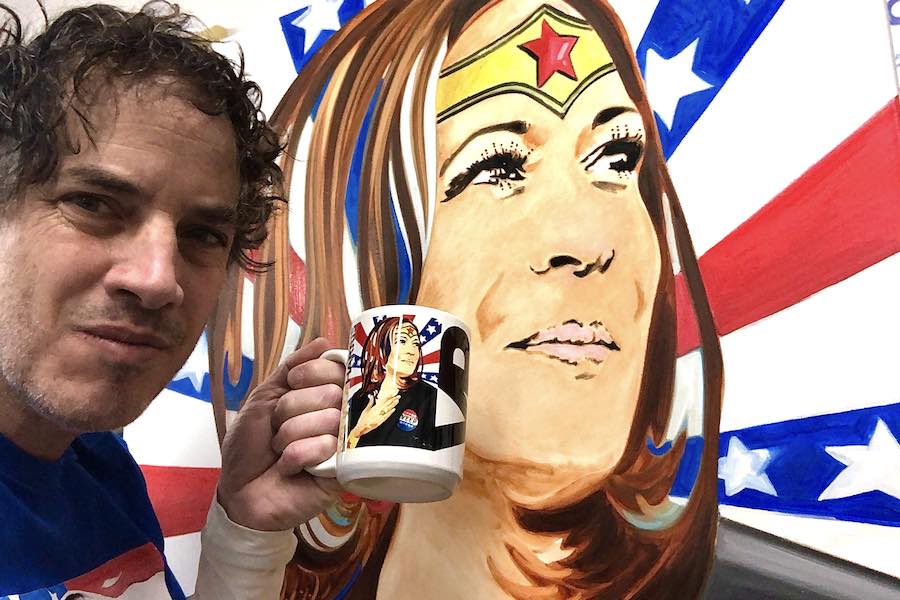 Philadelphia artist Perry Milou with the Kamala Harris mug (and painting) he created. Milou also made a Joe Biden mug.

“I just had to make another 5,000 mugs,” Milou says. “Stephen Starr bought 500 mugs from me last month to do a promotion. People from all over the country are buying them.” There’s just one problem: Some people are ripping off his creations, then selling them for less. “I see these ripoffs online, and they are undercutting me!”

Milou tells Philly Mag he noticed the unauthorized Biden and Harris mugs for sale last week on both Amazon and eBay. He’s selling his official Kamala Harris mug for $25 directly through his website and $24.99 on his Amazon page. But one Amazon vendor is selling a Kamala Harris mug bearing the same design — it even has Milou’s signature on it! — for $22.99. And, you can get the unauthorized mug faster than you can get the authorized mug, at least until Milou is able to restock.

“My art is on Facebook, LinkedIn, and Instagram,” Milou points out. “Anybody can just take a screenshot of that art and then find some graphic designer to recreate it for cheap. With the Internet and technology these days, it’s just a free-for-all.”

Milou says one mistake he made was failing to trademark his signature, something he said he should have done a long time ago. So he now has an intellectual property attorney working on that trademark.

He’s reached out to Amazon and eBay to complain about the unauthorized mugs, but he doesn’t think the companies will do much about it until he can show them trademark documentation.

Meanwhile, Milou has another lawyer going after the sellers directly with cease-and-desist letters. (Philly Mag unsuccessfully attempted to reach the merchants behind the unauthorized mugs.)

“Unfortunately, there are unscrupulous people in this world that take advantage of others’ hard work,” says Robert Casey, the lawyer handling the cease and desists. “This is now much easier with the advent of online shopping and social media. Nonetheless, we will protect what is Perry’s and make certain these bottom feeders stealing from him can’t do business any longer.”

Milou knows a thing or two about intellectual property disputes.

In August 2015, with Pope Francis set to visit Philadelphia about a month later, Milou announced he was selling his portrait of the pope for a whopping $1 million. But photo licensing company Getty Images cried foul because Milou’s portrait of the Pope closely resembled a photo the company owned, which made sense, because Milou based his portrait on that very photo. The parties settled the matter out of court.

But in this case, it sounds like the photographers of the world and their lawyers can rest easy.

“When I worked on the graphics for the Pope Francis painting, I was green as could be,” Milou observes. “I didn’t realize how that all worked. And I’ve since learned a lot. With these paintings, I looked at many, many photographs and changed a lot of things. I very strongly believe that I’ve transformed the art into something new and original.”