Forget goopy bags of hand sanitizer — there’s an easier (and more satisfying) way to get rid of egg masses. 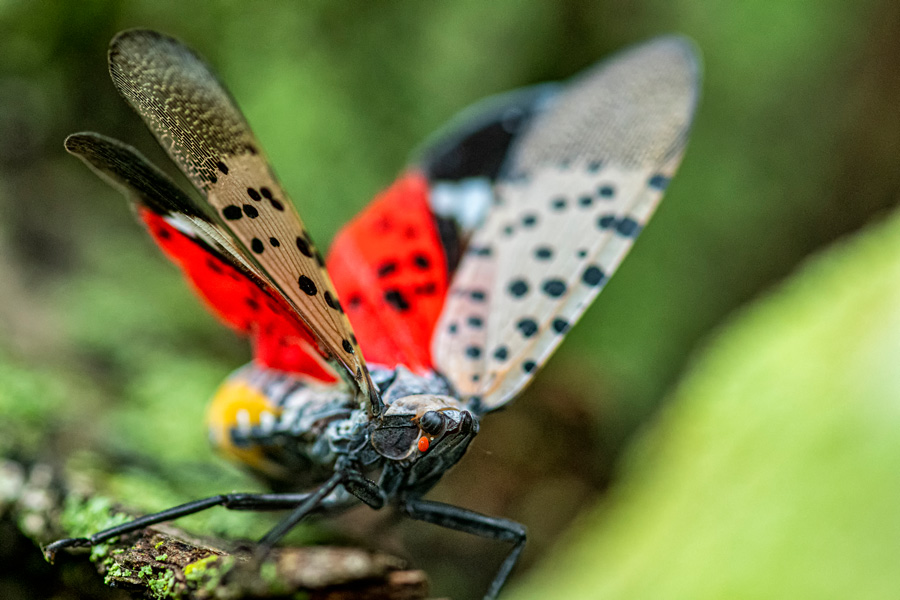 Spotted lanternflies will die off after a hard freeze, but their eggs remain. Here’s how to destroy spotted lanternfly eggs. Photo: cmannphoto/Getty Images

This year, spotted lanternflies were everywhere. We saw them resting on our trees, cars and sidewalks. We were dive-bombed on our way to the park. And in a fit of civic duty, we spent the summer chasing the offending insects down and stomping them to death.

It’s too soon to tell whether the hard work made a dent in their ranks. Over the winter, researchers with the Pennsylvania Department of Agriculture and Penn State — who together are leading the effort to contain and decrease the spotted lanternfly population — will analyze the reported-sightings data and create predictive models for the spread of the insect.

But Shannon Powers, press secretary for the department, believes we’re on track to avoid the worst-case scenario: a statewide spread and the mass destruction of trees, not to mention major economic loss — thanks in no small part to the carpet of lanternfly carcasses visible in some parts of the region. “Any dead spotted lanternfly reduces the potential for spread next season, so death equals success,” says Powers.

There’s still more to be done: Now is the optimal time to kill lanternfly eggs and prevent more population growth for 2021.  While this season’s crop of insects will die off after the first hard freeze, their eggs remain — unless we find and destroy them.

“Scraping those eggs off and killing them is super-important, and anybody can do it,” says Powers. “It doesn’t take any special tools. You just need to be able to recognize what it is when you see it. It will take a couple minutes to destroy an egg mass, because each one has between 30 and 50 little trails of eggs.”

Here’s our five-step guide to killing the next generation of lanternflies.

STEP ONE: Identify the eggs. 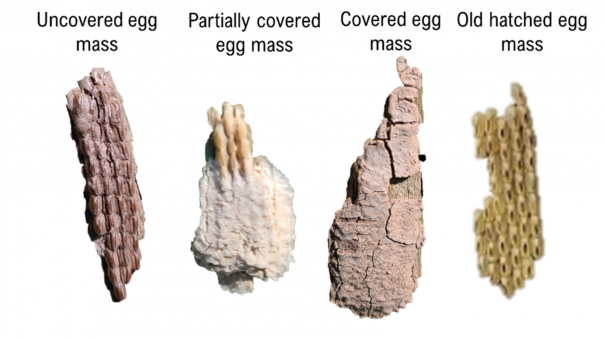 Eggs take the form of light brown and yellowish masses stuck to the sides of trees, houses, telephone poles and even cars. These are the lanternfly eggs, and each grouping could hatch up to 50 spotted lanternflies come springtime.

The masses differ in appearance, but if you see an odd brown crust about 1.5 inches long on the bark of your tree or another stationary outdoor object — it can sometimes look like gray or taupe chewing gum — it’s likely a group of covered lanternfly eggs. When uncovered (meaning the lanternfly was scared away before she could finish the job), they tend to be lighter in color, and you may be able to see individual pencil-tip-size eggs lined up in a row. Often, there will be multiple egg masses on a single tree.

STEP TWO: Call it in.

Report the sighting to Penn State, which is in the process of carrying out research essential to identifying both the spread of lanternflies and the areas most impacted by their growth. You can file a report online, or call the university’s spotted lanternfly hotline, 888-422-3359.

You may have heard that to destroy the eggs, you need to dispose of them in a sealed bag or container filled with rubbing alcohol or hand sanitizer. That’s certainly one option — the high alcohol content kills the eggs — but both products can be hard to find these days.

Powers says there’s an easier way. Once you’ve scraped the mass off a surface with a plastic card or putty knife, just smash the entire thing. Use your shoe, use a shovel — just take care to get each egg. A properly smashed egg must burst. (Pimple-popping aficionados, rejoice — you just found your new favorite activity.)

Either way you choose, make sure to be thorough: Any eggs that fall to the ground can still hatch in the spring. If you need more information, Penn State has provided a step-by-step instructional video.

Often, the lanternfly will lay eggs at inaccessible heights, so be prepared to get out your ladder and flashlight.

“Spotted lanternflies are prolific,” says Powers. “They don’t fly very far, but they can climb pretty high, and they can fly up to heights in trees and on buildings and things and lay their egg masses there.” And trees aren’t the only surfaces where you’ll find eggs, she notes: “They can be in your wheel wells. They can be anywhere on a car. If you’re in Philly and parked under a tree that’s infested with spotted lanternflies, you can take a live one late in the season to a new home when you drive, or you can take eggs that that lanternfly has laid, and that’s primarily how it spreads.”

If you’re concerned about masses you can’t safely get to, many area exterminators and pest-control professionals will come and remove those hard-to-reach egg masses.

It may seem that smashing a few egg sacs won’t make a difference when the masses are everywhere and your neighbors seem oblivious. But every mass you smash now equals dozens of lanternflies that won’t exist come spring. “Realistically, we’re not going to be able to kill every single spotted lanternfly egg,” says Powers, “but we can certainly put a dent in them.”