The state treasury has one of the best political accounts in all the land. But with Joe Torsella’s shock defeat this week, its days are numbered. 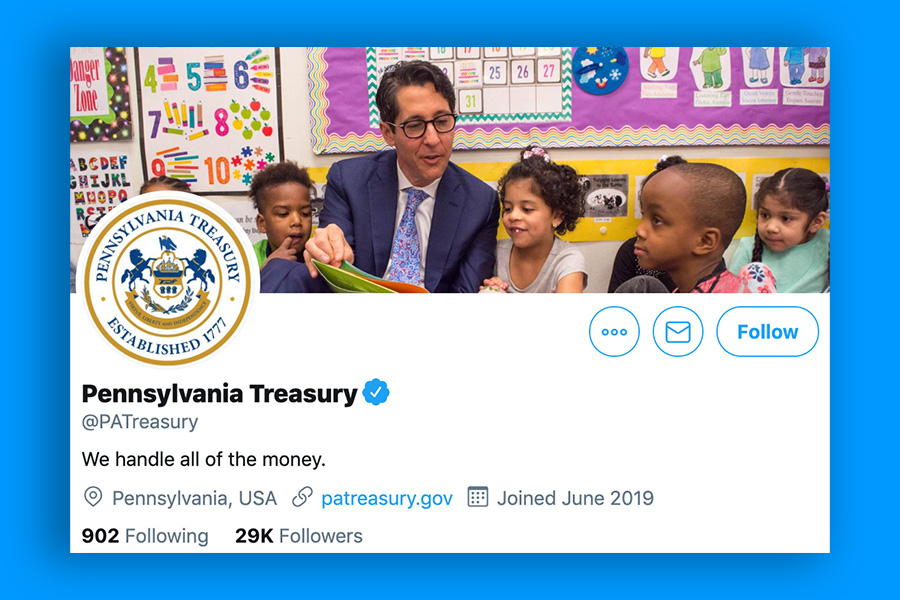 No one should ever be subjected to the jokes, quips or musings of Reese’s Peanut Butter Cups on Twitter. Unfortunately for us, the marketing consultants of the world have convinced an obnoxiously large, ever-growing number of companies that they should turn their brand’s social media accounts into a perpetual, cringe stand-up comedy routine. The worst part of all: It seems to work. You’ve surely seen the viral tweets of this genre, which traverse industry lines — everyone from Charmin, to Wendy’s to Old Spice to the Monterey Bay Aquarium has gotten in on the action. Who could forget the time Verizon tweeted about BDSM, or the time Netflix tweeted about sex? (That last tweet prompted a pile-on as a bunch of other social media managers jostled to get a word in at the Brand Twitter open-mic night — the stuff of nightmares.)

There is only one exception to the scourge that is “funny” brands: government Twitter accounts. The comedy is usually the same — some kind of appropriated version of Extremely Online internet culture as popularized by accounts like @dril. But there’s an obvious and critical difference: The only thing a tweeting Reese’s Peanut Butter Cup wants is for you to buy a Reese’s Peanut Butter Cup. A government account, on the other hand, wants you to pay more attention to the government. It is a kind of civics class via Twitter, the corniness repackaged for the greater good.

This type of Twitter account has proliferated, so much so that the New York Times wrote a trend piece about the phenomenon. And one of the early progenitors was none other than the Pennsylvania Treasury. The treasury’s account, which is run by anonymous members of the communications department, started posting in May of last year. Followers soon followed. (There are nearly 30,000 in all.) The account posts an amusing mishmash of tweets — some earnest, explaining what the treasury actually does, others more snide, like those attacking two of its frequent and favorite targets, Elon Musk and Jeff Bezos.

Tragically, the account’s days are numbered. On Tuesday, the current enlightened treasurer Joe Torsella, who allowed this Twitter experiment to take place under his watch, lost his reelection bid to Republican Stacy Garrity, which means he’ll soon have to hand over the keys to the official treasury Twitter account. The tweeters still maintain the currency of public office until January 20th, and we suspect they’ll be tweeting, string-quartet-on-the-Titanic style, until the very last second.

But then they’ll be gone. So here’s to one of the best political Twitter accounts in the land. You’ll be missed.

You may look up to him, but he’s only looking down on you. pic.twitter.com/isfh2VlnUO

“What if we took something like a subway, but made it unfathomably expensive and only for cars, and also make sure that it will never work?”—Elon Musk,,a genius.

Thanks for that, elon. https://t.co/NmL6loOYi3

1 in 6 children in America live in poverty. https://t.co/nCFEBCb7P8

Late-stage capitalism refers to one of the different periods in the development of capitalism, most commonly thought of as the period from post-WW II to the present. But most accurately, it refers to anything I don’t like in the moment. Rain after a car wash? Definitely LSC.

Most people pay more than $750 in taxes.

Kudos to the Chick-fil-A PR rep who spun so hard they got a news outlet to completely forget the difference between “free” and “not free”. https://t.co/TeQj5kXYNx

When you’re a rich celebrity and you’ve just spotted a new way to be out of touch during a pandemic. pic.twitter.com/YE9aFybZ2B

Well, folks, it’s true. The Department is indeed going to change hands, and I’m sure @JohnFetterman will also force the PA Treasury Comms team to surrender to authorities :)