The Best Thing That Happened This Week: Alec Bohm Is Up for Rookie of the Year!

The Phils’ third baseman is one of three finalists for the honor. Oh yeah, there was another thing, too … 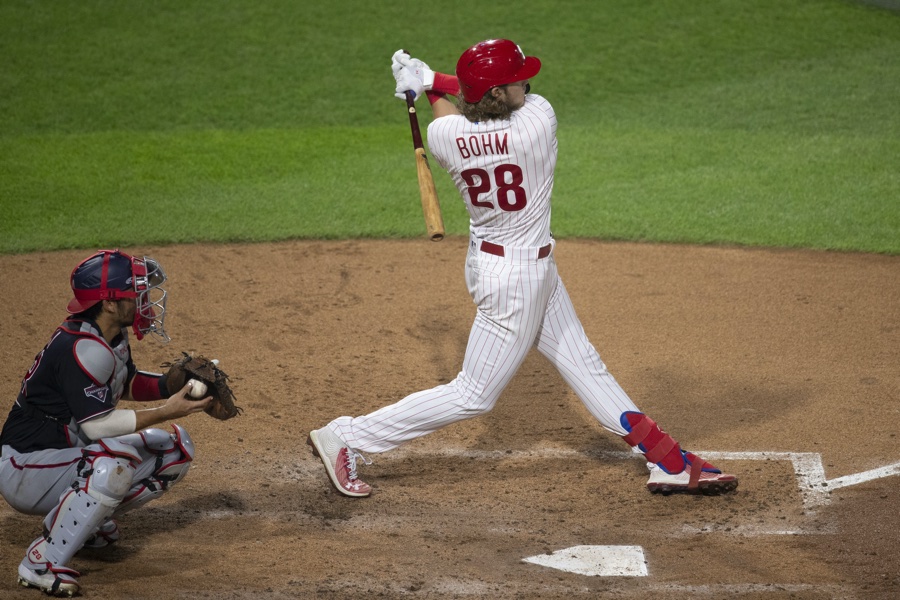 Alec Bohm, Rookie of the Year finalist, bats against the Nationals in September. (Photo by Mitchell Leff/Getty Images)

The last time the Phillies had themselves a National League Rookie of the Year, it was 2005, and the honoree was one Ryan Howard, a.k.a. “The Big Piece.” He’d go on to rack up innumerable awards in his career and lead the Phils to their World Series win in 2008. (What fan will ever forget him tearing his Achilles’ tendon on the final play of the 2011 NLDS?) You may also recognize the names of the only other three Phillies players to earn the NL’s ROTY nod: Scottie Rolen (1997), Dick Allen (1964) and Jack Sanford (1957).

And what exactly did Bohm, a six-foot-five native of Omaha, Nebraska, do to rate his nomination for the award (alongside Padres infielder Jake Cronenworth and Brewers relief pitcher Devin Williams)? Only lead all rookies in the league in hits (54), multi-hit games (18) and RBIs (23), as well as lead all rookies who made at least 150 plate appearances in batting average (.338), slugging percentage (.481), and on-base-plus-slugging percentage (.881). Indeed, Bohm was a rare bright spot in a dismal pandemic-shortened Phillies season under new manager Joe Girardi that saw the team finish out of the playoffs for the ninth straight year. Still, it seemed like every time we looked up, Bohm was blasting a hit or making a big defensive play just as it was most needed.

Nah, nah, we’re kidding! Sure, Bohm was terrific, and any other week, he’d be a shoo-in for our Best Thing honor. But this week, something even bigger happened in this city of ours: Philly saved democracy. Again. (Special shout-out to Four Seasons Total Landscaping!) If there’s anything sports and politics have in common, it’s what Emily Dickinson called “the thing with feathers,” a.k.a. hope — an intangible that Philadelphians know all too well. Bohm kept that bird alive for us in 2020 — and through all the anxiety-eating, the lawsuits and attempted rabble-rousing, the endless counting, the QAnon loonies, and the President’s gross slanders, in this election, our citizenry turned out and got the job done. Pretty gritty, City of Brotherly Love! And YOU’RE WELCOME, AMERICA!!!