As Congress and the President spar over a second round of economic stimulus, a look back on where the first round went wrong, courtesy of the City Controller's office. 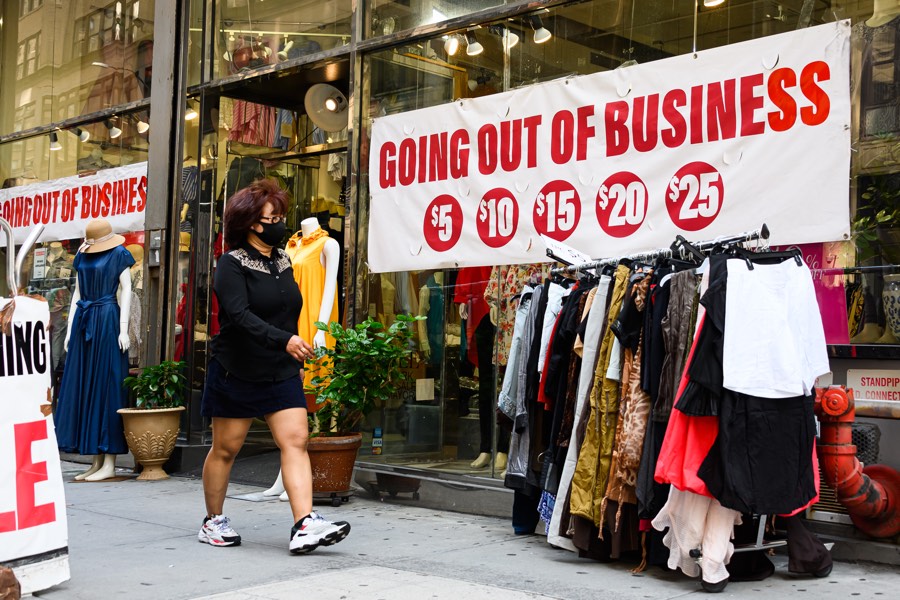 A business prepares to shut its doors for good in September. In Philadelphia, half of all small businesses received a PPP loan. Photo by Noam Galai/Getty Images.

Despite the mixed messaging coming from the President’s Twitter account — “I have instructed my representatives to stop negotiating until after the election” one minute to “STIMULUS! Go big or go home!!!” the next — it appears there will be no new Congressional aid before the election to combat the pandemic and resultant economic recession.

The first round of stimulus, the CARES Act, passed back in March, included the Paycheck Protection Program, a $669 billion cash infusion that provided forgivable loans to businesses that used the money to keep employees on their payrolls. But while the CARES Act as a whole was the largest government stimulus package in American history, there’s increasing evidence that the PPP didn’t really work as intended, especially when it came to its main goal: keeping people employed.

Earlier this month, City Controller Rebecca Rhynhart released a study of the PPP program that provides a granular look at the results in Philly. All told, about half of all Philly small businesses received an estimated $1.5 billion total in government loans. (Here’s a list of 80 notable businesses to receive loans that we compiled back in July.) The Rhynhart report presents a number of findings that bolster the conclusion that the PPP was inefficient. Here are four takeaways from the report — all of which, in different ways, explain why the program failed.

Unemployment in Philadelphia is currently at 15 percent, or 99,000 people. Prior to the pandemic, unemployment was around five percent. Is it possible, even likely, that unemployment would be even worse absent the PPP stimulus? Sure. But as reporters have noted, the design of the program was flawed from the start: It initially required recipients to spend the majority of the loan on payroll expenses within a period of eight weeks. But many of the industries hit hardest by the pandemic, like retail, restaurants and the arts, could hardly operate at all during the full-scale shutdown. Many businesses took the loan, barely survived with online business for two months, and then, once the loan ran out, ended up furloughing workers right away. A report in Slate in July noted that the program only boosted employment between two and 4.5 percent, which translates to a government expenditure of $224,000 per job saved. (By comparison, providing $600 per week in unemployment benefits for four months would have only cost $9,600 per person.)

So that’s not great. But arguably, the bigger problem with the PPP is that it helped the wrong industries.

In an earlier report, Rhynhart’s office listed some of the industries that were most affected by the pandemic: retail, restaurants, arts and entertainment, education, health care and transportation. Not on the list: law firms. And yet in Philly, the single largest recipient of PPP loans was — wait for it — the legal industry, with at least $110 million in government aid. Yes, law firms, which can operate pretty well remotely, unlike basically every industry on the list above, received the most money. Meanwhile, when it came to small loans (classified as those less than $150,000), the industry to receive the most on average wasn’t restaurants or retail, but rather dental offices.

Rhynhart’s report explains that there are some obvious reasons for those results. For one: Law firms have big staffs — and big staffs mean big payrolls, which mean big PPP loans. But that just reveals the clear structural flaw in the PPP’s design. As for dental businesses, they tend to pay higher wages than the service sector, which in all likelihood explains their higher average loan amounts.

In theory, there’s nothing wrong with lending money to dentists and lawyers. The pandemic affected everyone. But this theoretical only works in a world where the industries that most needed government support actually received it. And we know for a fact that many small businesses didn’t get that support. According to data from Yelp, there were nearly 100,000 permanent business closures nationally from March to September. So far as I’m aware, there haven’t been mass closures of dental offices or law firms.

Restaurants Received Aid, But Not Enough

Restaurants in Philly did receive more small PPP loans than any other industry here — 641 in all. But we run into the same problem as before: The PPP was really designed as a stopgap, and it doesn’t help service-industry businesses facing long-term financial challenges. (Some restaurateurs have noted, for instance, that they’d ideally be able to spend some loan money on operating costs other than payroll.) And Philly restaurants received smaller loans (an average of $44,600) than those in other large cities, despite the fact that restaurants make up a bigger chunk of the small-business economy here than elsewhere. The smaller loans are surely a result of Philly’s low minimum wage. But the fundamental point is that because of the PPP’s structure, Philly restaurants, which are comparatively more important to the local economy than other industries, received less money.

When the PPP program was first announced, there were numerous reports of Black business owners unable to secure loans, in stark contrast to their white counterparts. A national survey of Black and Latino business owners also found that just 10 percent of them received the loan amounts they’d requested from the Small Business Administration.

The report doesn’t delve deeply into the reasons why those disparities might exist, though they’re fairly obvious. We already know that Philadelphia is a city where income is distributed along neighborhood and racial lines. The unequal lending practices directly related to the PPP, combined with structural racism in the banking industry here and elsewhere, surely explain the fact that businesses in more diverse parts of the city received less money. Nationally, as of July, more than 26 percent of Black-owned businesses had closed due the pandemic, compared to just 11 percent of white-owned businesses. A report on WHYY found a similar situation on the ground in Philly.

Taken together, there’s really no way to read the Rhynhart report and not conclude that while the PPP was ambitious and cobbled together on very short notice, the program didn’t really work.