Starr Restaurants, the Barnes Foundation, Pat’s Steaks, Friends’ Central, Boyds, the Kline & Specter personal injury law firm, and the Archdiocese of Philadelphia all got at least $150,000 (and some a good bit more). 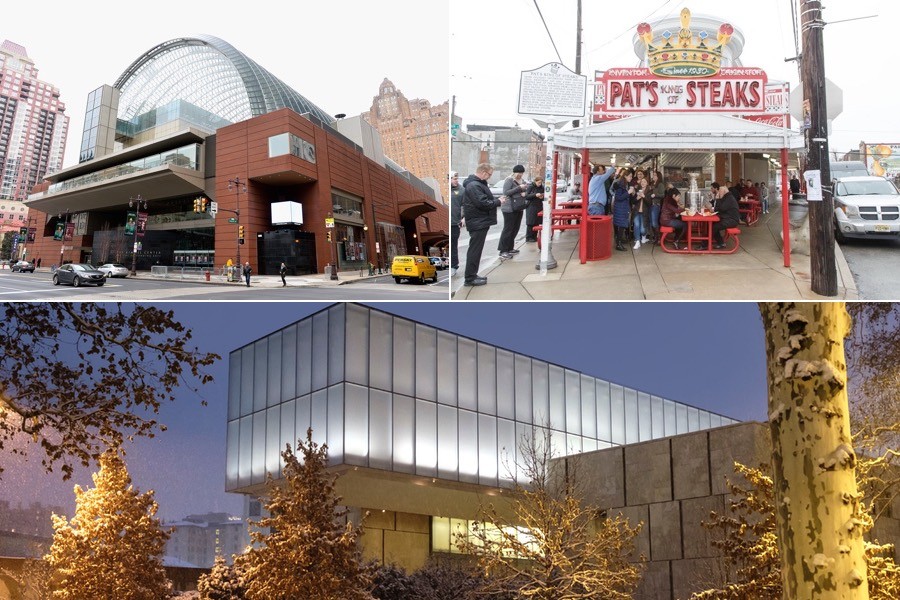 Around 10,500 Philadelphia companies received PPP loans in excess of $150,000. We tracked down the Philly-area PPP loan recipients of note. Photos (clockwise from top left) the Kimmel Center by Paul Marotta, Pat’s King of Steaks by Andre Ringuette, and the Barnes Foundation by Jumping Rocks via Getty images.

Well, sort of. The Trump administration on Monday released a list of 4.9 million businesses that received loans to pay workers who would have otherwise been laid off due to the pandemic, though it only named those businesses receiving more than $150,000. That totals 650,000, or 13 percent of all recipients. (According to the Small Business Association, the average loan size nationwide was $107,000). The millions of other business to receive smaller loans remain anonymous, and multiple news outlets are suing the government to unearth their names.

Still, Monday’s data dump left us plenty to sift through. In Pennsylvania alone, 26,000 businesses, in virtually every sector of the economy, received more than $150,000. The businesses in question ranged from the notable (Starr Restaurants, the Philadelphia Museum of Art, Boyds) to the not-so-notable (many, many construction firms, car dealerships and doctor’s offices.)

To establish our definitive list of noteworthy Philly businesses to receive PPP funds, we sorted through the the very large, occasionally headache-inducing Excel spreadsheet. Here’s what we found. (Note: The spreadsheet doesn’t list exact amounts that companies received, just a dollar range.)

Restaurants were among the businesses hardest hit by pandemic closures, so it’s no surprise to see plenty of titans of the Philly food scene here. It’s even less surprising when you consider the total failure of the restaurant insurance industry. Here’s the list:

Museums have been closed since March. Now, with the city in a green phrase (which isn’t really a green phase, considering that many businesses, like restaurants, still aren’t allowed to open indoors), they’re officially returning. Performing arts institutions like theaters, on the other hand, packed as they are with indoor seats, aren’t so lucky. And even if they could reopen, it’s far from certain that people would want to sit in a theater for two or three hours. In New York, Broadway has already canceled all performances through the end of the year. Which is all to say: No surprise that there are lots of well-known businesses in this category, too.

Here’s another industry that’s been decimated with layoffs due to the pandemic. A number of local media outlets (and one PR firm) in Philly did receive some governmental assistance, though. This is also where we disclose that Metro Corp., Philly Mag’s parent company (and also the publisher of Boston magazine), received between $1 million and $2 million from the PPP program. Which is maybe one of the reasons why you get to read this article. Thanks!

Also taking a huge financial hit due to the pandemic? Retail stores. We didn’t turn up that many in the spreadsheet of companies receiving more than $150,000, though we’d expect a whole bunch more in the still-anonymous list of those receiving less than that. Here are two heavy hitters:

You wouldn’t really expect startups, considering their proximity to the bursting wallet of venture capital, to be struggling for money. Perhaps that explains why we found only two tech companies in the PPP database.

Nonprofits and civic institutions typically rely on the generosity of donors — or governments — to make ends meet. And by the time those ends are met, there often isn’t a whole lot left over. Which is why the following groups received assistance:

The educational institutions receiving money from the government range from hyper-expensive private schools to publicly funded charters to colleges with (admittedly small) endowments. Here are a few of the notable ones.

Developers in Philadelphia already get one very significant tax break. Now, some of them are getting a different kind of governmental assistance.

For our last category, we consider those businesses that don’t provide goods, but rather services or subscriptions (or, in one case, the word of God).

Congrats on making it this far! Should you wish to descend further into the spreadsheet depths of the PPP loan recipients, you can download the full data set here.

Update 7/8/2020: This story has been updated to remove Delaware Valley University, which says it returned its PPP loan after determining it didn’t meet the eligibility criteria.

Update 7/20/2020: Due to an error in the SBA dataset, this story originally misstated the amount of the Pennsylvania Horticultural Society’s loan. The loan was between $1 million and $2 million, not between $2 million and $5 million.