When You’re Rowhome Parenting in a Pandemic, Everyone Can Hear You Shouting

Raising kids in the city — and during a pandemic — has ruined any illusion that I’m a flawless mom. 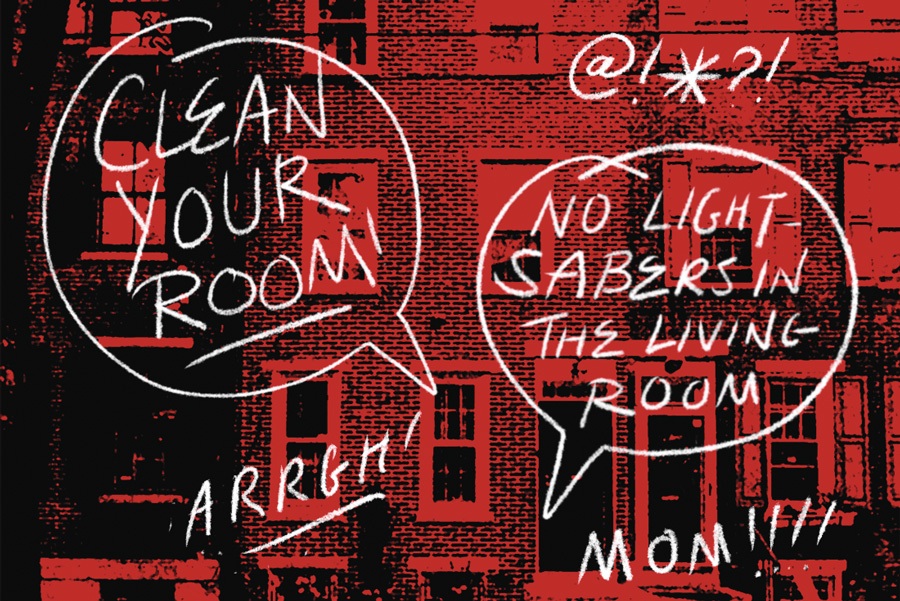 City parenting means everyone can hear exactly how loud you are. Illustration by the Heads of State

One of the things I generally appreciate about living in a rowhome is the sense that I’m never truly alone. I mean this in a metaphorical sense — there’s a certain camaraderie that comes with sharing your back porch and your mouse issues — and also literally, like if an ax murderer were to break into my house, my neighbors would definitely hear the screaming. They might not be able to make it over in time to save me, but I figure they’d at least be able to offer some clues to a detective.

That our lives occasionally commingle with our neighbors’ a bit more than anyone would choose has been at most a blip in an overall happy setup. So we sometimes hear the neighbor’s dog barking or know from their cheering the outcome of the Eagles game we’re DVR’ing. So what? They’ve long suffered the jangly piano “music” coming from our house and a smoke alarm that goes off every time I turn the oven past 400 degrees. Nobody gets ruffled over such things. The most disturbing moment by far occurred several years and neighbors ago, when we heard what was unmistakably sex on the other side of the bedroom wall. Even then, we just put in some earbuds, cranked up the Netflix, and moved on with our lives. When in rowhome, you know?

But over the past couple of years, my longtime insouciance about the quirks of rowhouse life has really taken a hit — a shift I blame on my children. They’re three and seven now. Which means where once our home was filled with the sounds of gentle cooing and the occasional baby crying (the types of noise only a real jerk could fault us for), we’ve aged into an era of yelling. Question yelling, tantrum yelling, I-don’t-want-to-wear-that-shirt yelling, stop-throwing-your-oatmeal yelling, get-over-here-right-this-minute yelling. Someone in the house is constantly hollering about something … or about nothing at all. What I’m saying is that once, we were the Cleavers; now, we’re the Bunkers. Even worse: We’re the Bunkers, except housebound in a 1,200-square-foot home in a pandemic.

In the increasingly rare moments when I can hear myself think, I shrink at the idea of my own part in all this — I guess I’m a yelling mom now? — and worry as I never used to: What must the neighbors think?

Did you know that yelling at your kids is as bad as spanking them? (And spanking? Spanking is basically waterboarding, according to modern parenting wisdom.) If you’re raising a child in 2020, you’ve probably read all the same stuff I have, like the story in the Washington Post noting that even if you’re not yelling mean or threatening things (which I don’t do), “the surprise of a sudden change in volume can cause a child to be fearful or anxious.” Or the piece in the New York Times informing us that not only does yelling make you look weak; it also increases anxiety, stress, depression, and behavioral problems in kids. Oh, and the story added, it doesn’t work. As with everything I’ve ever read about raising children, I carry this information in my heart, whether I want to or not. But this particular bit is tucked in with a little resentment. Screw you, New York Times, I think. When was the last time your kid flushed a terry-cloth headband down your 90-year-old pipes? When was the last time you spent 157 consecutive days inside a house with one child who just learned to whistle and another who just learned to lock doors?

But the truth is, it’s not COVID parenting or the endless new rules of momming (wait — even timeouts are frowned upon now?!) that make me feel so rotten. It’s that I’d always planned to be a serene, gently authoritative mom, like the mothers in the books I loved as a child. Those women never found themselves in the basement trying to communicate with a disinterested child two floors away. When they were angry, they only had to raise an eyebrow, never their voices, for their progeny — who never seemed to launch Exorcist-level freak-outs over swallowing a spoonful of children’s Mucinex — to fall ruefully in line. Was Caroline Ingalls ever elbow-deep in a diaper change with one child while shouting at another child to PLEASE STOP SWINGING THAT LIGHT SABER IN THE LIVING ROOM? Not to my recollection. Did Marmee March ever yell at her kids to QUIT WIPING BOOGIES ON THE WALLS BECAUSE IT’S DISGUSTING AND YOU’RE RUINING MY PAINT JOB? I highly doubt it.

But just as bad as the self-flagellation over failing to live up to various parenting ideals is the vulnerability of knowing that I’ve got witnesses to all of my failings. I might seem a benevolent, collected mom in public, but inside the house, where real life and terrible flushing incidents happen, the jig is up. I’m no Caroline Ingalls, and everybody within earshot knows it. Nowadays, when I think about the neighbors calling the police, it’s not because I’m hoping they’ll save me from a murderer, but because I’m worried they think my son’s refusal to TAKE HIS FREAKING MUCINEX is, in fact, waterboarding happening next door.

Okay, I’m overstating it. A little. But I do worry sometimes the neighbors think that I’m not a good, patient parent, or that my kids aren’t as lovable as they really are, or that we’re the shrewish, screamy neighbors I never thought we’d be. In my darker moments, I’m even a little jealous of my suburban friends. They might have to drive everywhere and put up with second-rate takeout, but at least they can yell at their kids with abandon.

Here’s the truth about our immediate rowhome neighbors: We’re very friendly with them, and they don’t seem to mind our particular type of ruckus. Also, they’re parents themselves. One couple has a two-year-old with another baby on the way (so we tell ourselves they’ll understand the yelling one day); the other has two lovely middle-grade children who don’t seem to inspire yelling (so we tell ourselves they’re proof that this moment will pass — although we do sometimes hear them yell at the dog, which also makes me feel better).

Still, the insecurity of parenting with party walls isn’t about actual judgy neighbors so much as it’s about the idea that another person could be formulating a notion about how good (or not) you are at this parenting thing, in exactly the same way that person has figured out how often you burn the bacon or that you really like Dolly Parton. It’s about the vulnerability of imperfection in the era of ever-present and exhausting #parentinggoals.

Given all that, it’s no wonder rowhome-related parenting anxiety is a constant topic of conversation among a half-dozen moms on my block. You might think we’d have more pressing worries these days. And sure, we do. But the global pandemic, economic meltdown, and the horrifying prospect of long-term “virtual learning” has honestly just added to — not erased — the more pedestrian forms of mom-shaming stress.

One of these women — such a warm, excellent mom, by the way — frets that if she can hear the neighbor’s cat’s meow through the wall, she knows that a neighbor has heard yelling and, even worse, her most “guttural” sounds of fury. She grimaces: “She’s definitely heard me at my worst.” The rest of us laugh sympathetically.

But here again, a certain camaraderie has sprung up from our (literally!) connected existence. It occurs to me that maybe this frustrating inability to at least project ourselves as the advice-abiding parents we all want to be is part of the reason I’ve gotten so close to many moms on the block. Fear of judgment for parental shortcomings — and finding people to bond with over that fear — is hardly the exclusive territory of urban parents, but let’s face it: There’s a heightened level of intimacy when someone regularly hears you yell about boogies on the walls.

It also helps, I think, that we’re able to remind each other that our collective offspring are more often than not the beneficiaries of the measured, “mindful” parenting prescribed by everyone from, yes, the Times to our pediatricians to the trillions of books that exist on the topic. It’s just that all the “positive parenting” stuff is pretty quiet. Do the neighbors ever hear how much singing we do? The tickle fights? The sound of a crying child being comforted? The endless hours of Uno and story times and kid-focused hang time that make up the bulk of our lives?

The answer, of course, is that it doesn’t really matter. We are, in the end, the parents we are. Figuring it out within constant earshot of other people is just one of the many ways we’re humbled by the job and humanized by the urban experience. I suppose all any of us can really do is occasionally tell our neighbors we’re sorry for the noise and — more importantly — keep up our end of the bargain in an ax-murderer situation.

Published as “Parent Trapped” in the October 2020 issue of Philadelphia magazine.