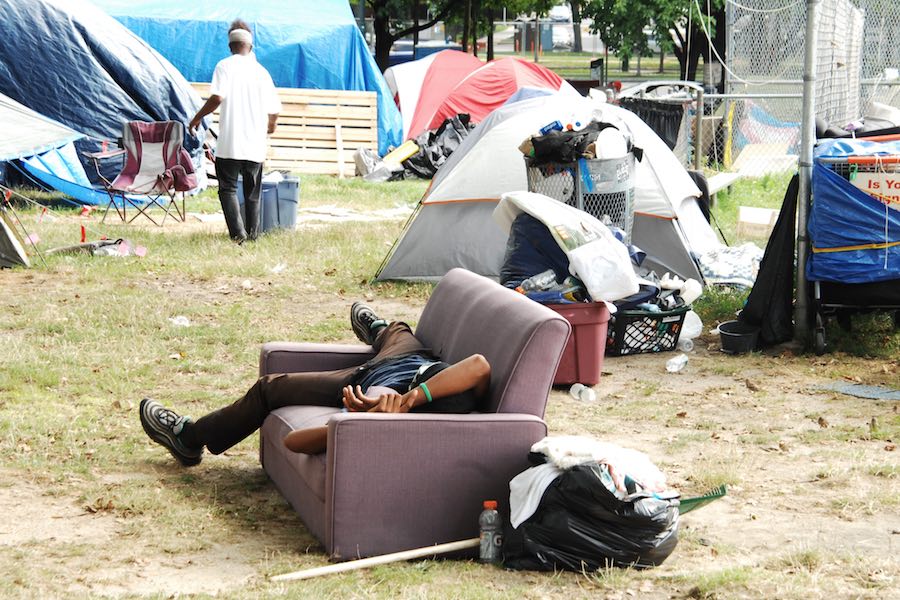 A view of the Parkway encampment in Philadelphia (Getty Images)

Federal Judge Says Time’s Up for Parkway Encampment in Philadelphia

If you’ve been out on the Benjamin Franklin Parkway in the last couple of months, you’ve probably seen all of the tents and such that make up the Parkway encampment. It’s a collection of homeless people and protesters who are demanding free housing and a bunch of other things — and pissing off the neighbors in the process.

The city told the members of the Parkway encampment to get out. The members said no. Deadlines were ignored. Then the battle went to federal court. And on Tuesday, federal judge Eduardo Robreno gave the city the okay to remove the encampment after a 72-hour grace period.

And now, the Kenney administration faces quite a predicament. It’s only been two months since the city was in a very negative national spotlight over the use of tear gas on protesters. And those tear gassing incidents have resulted in huge lawsuits against the city.

So what is going to happen when the city goes in to remove the encampment — or, as the judge put it, “terminate” the encampment — while journalists and citizens with their cell phone cameras stand by?

“I urge those still in the camps to voluntarily decamp and avail themselves of the beneficial services being offered,” Kenney pleaded on Tuesday.

Kenney is desperate. And it’s anybody’s guess what his next move is. If I were him (and I’m really, really glad I’m not), I’d just let the encampment stay put and let the neighbors continue to complain — if only out of self-preservation and the desire to avoid another PR nightmare.

Here is the full opinion issued by Robreno on Tuesday:

Kendall Stephens was home with her husband, goddaughter and another child on Monday night when she heard a loud commotion outside. Stephens, who is a trans woman, told the people outside to quiet down or she’d call the cops. But instead of quieting down, Stephens says they charged her and attacked her inside her home.

“They called me a tranny,” Stephens told 6ABC. “They said, ‘You’re a man, we’re gonna get you.’ And they were repeating this all throughout the beating…”

Below, the full interview from 6ABC. Anybody with information is asked to call the police tip line at 215-686-TIPS.

Could COVID Be the Thing That Finally Legalizes Marijuana in Pennsylvania?

It has been close to six years since Philadelphia City Council voted 14 to 2 to essentially legalize marijuana in Philadelphia. If you’re caught with 30 grams or less, the penalty is a small fine. No criminal charges. No jail. It’s just a code violation, like when you put your trash out three days too early or let your, er, grass grow too, er, high. But across much of Pennsylvania, the cops still treat marijuana like the devil’s lettuce that causes bouts of reefer madness. That could be changing.

Upper Darby — keep in mind that Upper Darby is the state’s sixth biggest municipality and one that, until recently, was run by extremely conservative politicians and a police superintendent whose motto was “Not in My Town, Scumbag” — just voted to decriminalize marijuana there. The township will now treat possession of small amounts of marijuana the same way that Philadelphia does. That makes Upper Darby the second town in Delaware County to decriminalize marijuana. Folcroft (it’s right by the airport) did so earlier this summer.

And now Pennsylvania Governor Tom Wolf is calling for full-blown, all-out legalization of marijuana for recreational use among adults. (It’s already legal for medical purposes.) Wolf wants to use the tax revenue from legalized recreational marijuana to ease the financial burdens brought on by COVID.

“With the extra funding from recreational marijuana legalization, we can actually do things that have to be done to help families and businesses that have been so devastated by this pandemic,” Wolf said on Tuesday, his marijuana-friendly lieutenant governor wasting no time jumping in on Twitter:

Every community across PA is struggling.

How can we turn down billions in long term revenue over reefer madness? pic.twitter.com/NKmKGuz65U

Now keep in mind that while this could mean that you may soon be able to sit on your front porch smoking marijuana all night long no matter where you live in Pennsylvania, it would still be illegal for you to sell marijuana. After all, the state wants to wet its beak — sorry, I mean use those funds to help people.

Plus, as far as the feds are concerned, anything that has to do with marijuana is totally illegal. Yes, marijuana is still a so-called Schedule 1 drug in the eyes of the DEA, putting it in the same category has heroin. Hey, what can I tell you? Call your U.S. senators and members of Congress.