"We have employees who are working 30 plus days straight, 12 hours a day," says the head of the sanitation union, who insists that the mayor's number is inflated. "I’m amazed no one, including the mayor, speaks about that." 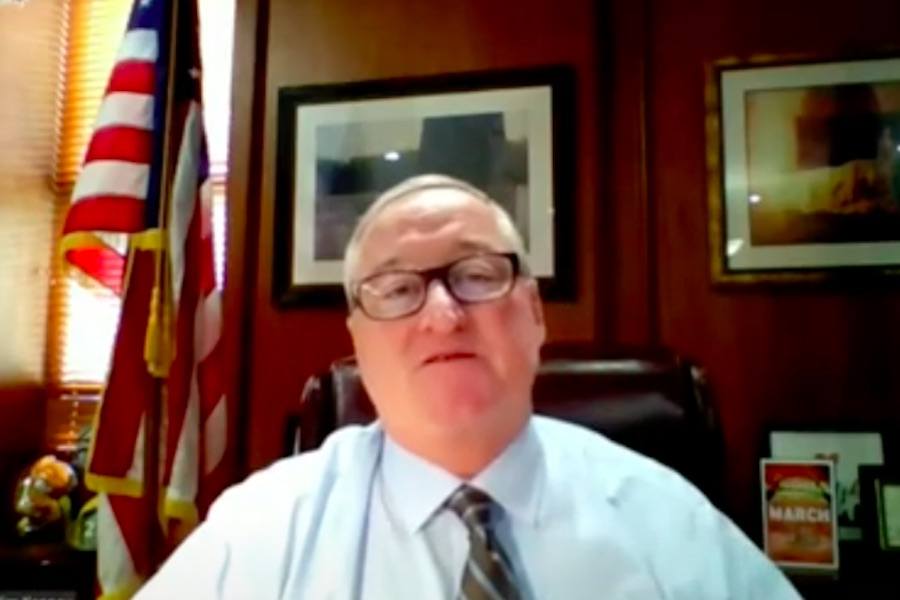 Philadelphia Mayor Jim Kenney talking about the Philadelphia trash collection problems during the COVID pandemic. (Image via City of Philadelphia)

Another week, another series of Philadelphia trash collection problems. Some Philly residents claim they’ve had trash or recycling that has remained uncollected for weeks. In my West Philly neighborhood, we’re supposed to see the trash truck on Mondays. This week, we saw it on Wednesday. Not abysmal. But certainly not where you might have expected Philadelphia trash collection to be right now, given the way that Mayor Jim Kenney was talking about improvements to the system a couple of weeks ago.

Earlier this week, a reporter asked Kenney for a “realistic timeline” of when Philadelphia trash collection would actually be back on track, as opposed to just a figment of his wishful thinking.

“A realistic timeline is when we no longer have about 200 employees calling out either sick or with COVID-related excused absences each day,” Kenney snapped back. (He also took the opportunity to, once again, wag his finger at residents who can’t seem to pack their garbage and recycling properly, something he’s been harping on for months.)

200 workers each day? From a department that has fewer than 940 employees? I decided to circle back to the mayor’s press office to make sure he didn’t misspeak. He apparently did not.

“We have over 200 sanitation workers that are absent on an unplanned basis each day due to health and illness reasons,” a spokesperson for the mayor told me. “The COVID epidemic is part of this staffing shortage and has exacerbated overall absences since the pandemic began.”

“That number is hugely inflated,” insists Salaam, though he was unable to provide a specific number to counter the mayor’s claim. “The problem is not people calling out sick. At its height, our department had 3,000 employees. And they’ve cut our department drastically since then. So now we have to service the whole city with less people. And then COVID happened on top of that.”

COVID’s impact on the sanitation workers has been well documented. There’s more trash, because people are home more than ever. Working conditions are unhealthy. And sanitation workers have resorted to starting fundraisers for what they deem adequate protective gear. So the public’s anger over the trash problems has been directed, appropriately, at Kenney’s administration — not at the trash collectors.

“We have employees who are working 30 plus days straight, 12 hours a day,” he says, later telling me that one trash collector is on his 47th straight day of work without a day off. “I’m amazed that no one — including the mayor — speaks about that.”

Live Theater and Movies Return to Philly, Along With Indoor Dining

On Thursday, I gave you the rundown about the return of indoor dining in Philadelphia. In short: You’ll be able to eat inside Philadelphia restaurants beginning on September 8th. There are lots of rules. (If you think you’re going to grab a table for eight at Parc with all your sorority sisters, think again.)

But there is a catch. Well, not just one.

First, theaters cannot serve food or drinks. So if you want some popcorn and a Coca-Cola with your movie or a cocktail during intermission of a three-hour play, you can’t have it.

Second, theaters must limit their capacity to 50 percent of pre-COVID levels or a maximum of 25 people, whichever is smaller.

Yes, that means that whether you are the Wilma Theater, which seats 296 people, or the Forrest Theater, which seats 1,851, you can only allow 25 people in. I didn’t think that makes much sense, so I asked Philadelphia health commissioner Tom Farley about it on Thursday. And he told me that the city was just following the state guidelines.

So a maximum audience of 25 people? How on earth will a theater recoup its costs and pay its actors a fair wage if only 25 people can see a show?

“Let the $500 ticket begin!” joked a local event producer on Thursday. At least I think he was joking.

Murder. Murder. And more murder. That is the heartbreaking trend in Philadelphia these days. You know that.

But just to illustrate how bad the Philadelphia homicide problem truly is in 2020, here are some cold, hard statistics.

As of midnight, there have been 286 murders in Philadelphia this year. That is a 34 percent increase over the same day last year. And that’s 23 more murders than we had this day in 2007, which was the most murderous year in the last 14 years.