Why the Return of Sports Feels So Uncomfortable

The return of sports also means the return of distraction. Is that really what we need right now? 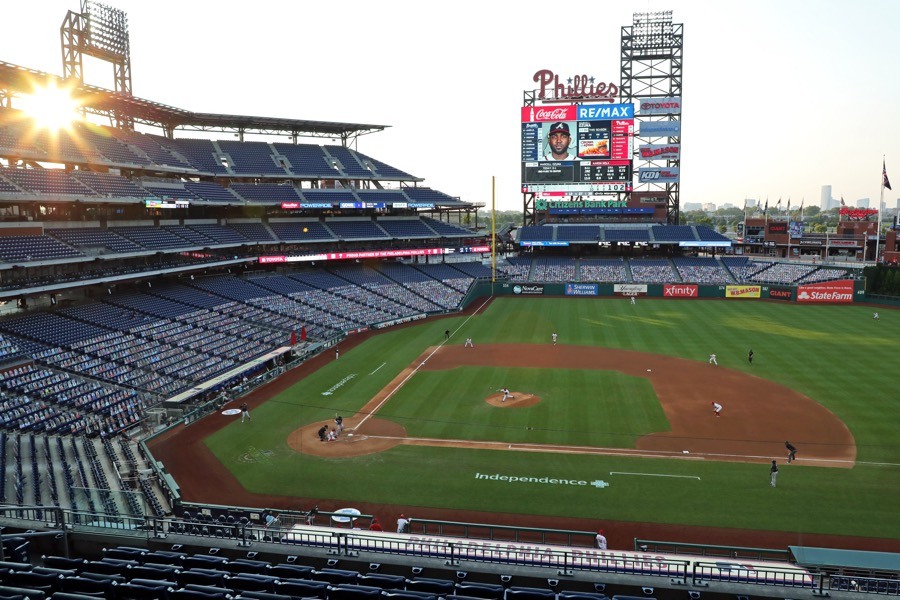 An empty Citizens Bank Park as the Phillies, the first Philly sports franchise to play at their home stadium, defeat the Braves on August 10th. Photo by Hunter Martin/Getty Images.

If the last few months of lockdown have made anything clear, it’s that the feeling of normalcy (remember normalcy?) is built on routine. Commutes, work, more commutes, evenings, weekends. That’s normalcy! For many people, this one included, an important aspect of that routine involved watching sports. And then suddenly, in March, they were gone — poofed into coronavirus oblivion virtually all at once.

Owing to this country’s catastrophic failure at containing the virus, the U.S. is not much better off now than it was in March. And yet, the country’s attention span has seemingly waned. After a few months in quarantine, people are walking out of the cave toward the blinding light of the old ways. And there is one immensely bright light pulsing and drawing closer every day: Sports are coming back. Just a week ago, you could have watched the Union, the Sixers and the Phillies — all on the same day!

This should be a welcome relief. Sports brings with it plenty of pleasure, that vaguely narcotic feeling of settling into the couch knowing that your next eight hours — a Philly sports tripleheader! — are all accounted for. But whatever nostalgia and excitement sports provide, I can’t help but feel a nagging sense of grimy discomfort whenever I think about what their return actually represents.

The thing about sports is that they’re a bit like the top segment of the pyramid in Maslow’s hierarchy of needs: They only really work if you have the foundation of a functional society beneath them. Unfortunately in the United States, we don’t. Coronavirus cases are rising in many parts of the country, more than 160,000 people have died from the virus, and that’s to say nothing of the ongoing national protests over racist policing. Yes, ours is a failure of government, but it’s also a failure of society. Which makes one wonder: If sports are meant to be a distraction, is that really what we need right now?

To be fair, not all sports leagues produce equivalent levels of stomach-churning angst. The most successful sports to restart — basketball and soccer — are the ones that have effectively rejected the idea of sports as escapist, blissful ignorance. In both sports, the men’s and women’s leagues restarted in “bubble” conditions, meaning their players have been effectively isolated away in a permanent state of luxurious semi-quarantine. (The NHL is also currently underway in a bubble.) The bubble might sound like a type of escapism, but it’s actually the opposite: an acknowledgement that there’s no way to safely contest a season but under sealed-off, artificial conditions.

Soccer and basketball have also both recognized and embraced the fact that their return comes in the aftermath of the George Floyd protests. This was a central concern of many athletes, who feared that the return of games would detract from the momentum of the protests. The resulting emphasis on protest and activism has produced a litany of memorable moments that would have seemed unthinkable just six months ago: Philadelphia Union players wearing jerseys bearing the names of Black Americans killed by police, Sixers players kneeling during the national anthem and playing on a court emblazoned with the words Black Lives Matter, Atlanta Dream WNBA players actively protesting their team’s anti-Black Lives Matter owner, Senator Kelly Loeffler. The politics of sport has even spread to the commentary box: During one NBA broadcast, an ESPN commentator stopped his running play-by-play to talk about about the murder of Breonna Taylor. Considering ESPN’s usual policy that sports should never leave the arena and venture into the surrounding world in which the games are being played, that made for a shocking declaration. In every case, the message was the same: This game is not a distraction.

Contrast that with baseball, the old, drunk uncle of the American sporting family. The MLB decided to eschew the bubble and have teams travel throughout the country to play games at opposing teams’ stadiums. (In Canada, home to a much more sane government, the powers that be refused to let the Blue Jays play in Toronto — effectively banishing the squad to play at “home” in Buffalo instead.) There have already been outbreaks on multiple teams, including the Marlins, whose outbreak happened here in Philly, forcing players to quarantine for days at a Center City hotel. Is it any surprise that the national pastime adopted the same lax standards as much of the country? Amid outbreaks, canceled games and broken quarantines, baseball soldiers on.

Meanwhile, baseball’s efforts to spotlight racism fall short of what you see in soccer and basketball. The Phillies put together a demonstration on Opening Day, but the MLB only allowed other visual reminders, like the spray-painted pitcher’s mound with the letters BLM, or Black Lives Matter jersey patches, during the initial slate of games. Many teams have knelt together in apparent solidarity before games, producing what seems like a powerful image. Until you realize that most of those players then promptly stood for the playing of the national anthem, and in so doing stripped away the very norm-breaking action that makes a protest a protest. Not that any of this was especially surprising. After all, this is the MLB, the very last of the major American sports leagues to issue a statement acknowledging the death of George Floyd.

There’s one final, football-shaped unknown: What will the NFL look like? We have a few clues already. Like baseball, the NFL has popped the idea of a bubble. Perhaps as a result, a full team’s worth of players has opted out of the season. And in the lucrative college game, conferences are starting to backtrack on their plans for a season — although reportedly only after they determined that the coronavirus might produce a dangerous heart condition in some athletes. Don’t expect the same from the pros.

When the NFL does inevitably return — opening day is slated for September 10th — plenty of people will be paying close attention to how the league handles player activism. You can expect some kind of perfunctory gesture of support from the league, like commissioner Roger Goodell’s statement on kneeling. But remember: This will mean next to nothing. Colin Kaepernick will still be effectively blacklisted for his original protest. Prominent owners like Jerry Jones will still hold their anti-protest beliefs. We know this because they’ve said (or more precisely haven’t said) so.

So what does this mean for the queasy sports fan? I suppose it means that we should feel grateful there are at least some sports leagues that aren’t making a complete mockery of their return. As for the others, there’s really only one defensible action you can take. Fortunately, it’s a relatively easy one — something we all managed to do for weeks at the start of March: Don’t watch.