The CDC has made it unquestionably clear that masks are “one of the most powerful weapons” we have against COVID-19.

Even Donald Trump has waffled a bit on his anti-mask stance.

And yet many Philadelphia police officers, who are supposed to be role models in their community (right? That’s a thing?), still aren’t wearing masks while on duty.

If you spend any significant amount of time driving or wandering the garbage-lined streets of Philadelphia these days, you will, no doubt, spy a cop who isn’t wearing a mask, even as most Philadelphians seem to have finally gotten the mask-up message.

I wasn’t really surprised to see these unmasked cops back in April or May or even June. There were a lot of people who didn’t really get it. But now it’s August. And you have to be a real denial-type person to fail to admit that the country has been crippled by COVID-19.

At one point during Sunday’s demonstration, a protester questioned a couple of police officers who weren’t masked. She pointed out to them that she and her fellow protesters were wearing masks. “That’s your choice,” one said. The other told her that she sounded like a “military” by trying to “force people to wear masks who don’t want to.”

Philadelphia police commissioner Danielle Outlaw has repeatedly told her cops to wear their masks, but some simply refuse. And the city has basically said there’s nothing to be done about it.

“Sometimes, getting an officer to do something they don’t want to do is like trying to get my son to clean his room,” one police official, who says he always wears a mask while on duty in public, told me.

If you’re planning a late-summer family getaway to Ocean City — meaning the other Ocean City, the one in Maryland — you may want to reconsider.

The City of Philadelphia says you shouldn’t visit Maryland because of its COVID numbers. Actually, there are a bunch of places you’re not supposed to visit. Wanna go gamble in Vegas? Nope, don’t think so. Hit the sunny beaches in Southern California? Sorry. Oh, you thought it might be time for that Alaskan cruise? Alas …

The red states on the map are the ones we’re not supposed to visit: 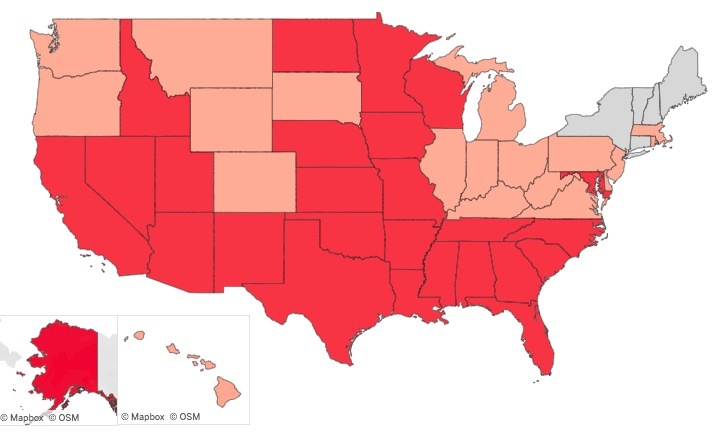 If you do choose to visit any of these places, you need to self-quarantine for 14 days upon your return, the city said on Friday.

But, hey, I hear Maine is quite nice this time of year.

In the ongoing Philly Trash and Recycling Debacle of 2020, trash and recycling pickup is delayed yet again this week.

The logic here is that sanitation crews are going to spend all of Monday doing their best to catch up on the old recycling that’s been piling up on your curb for weeks and weeks. And then the city is asking you to hold your trash and any new recycling until one day after your normal pickup day. The idea being that things should be back to normal or something closer to normal next week. We hope.

Meanwhile, Upper Darby is now using school bus drivers to help with the trash crisis there.