These Are 10 of the Coolest, Oldest and Most Storied Trees in Philadelphia

Some are still reaching skyward, others are gone but have amazing tales to tell, and one was the subject of a decades-old mystery. 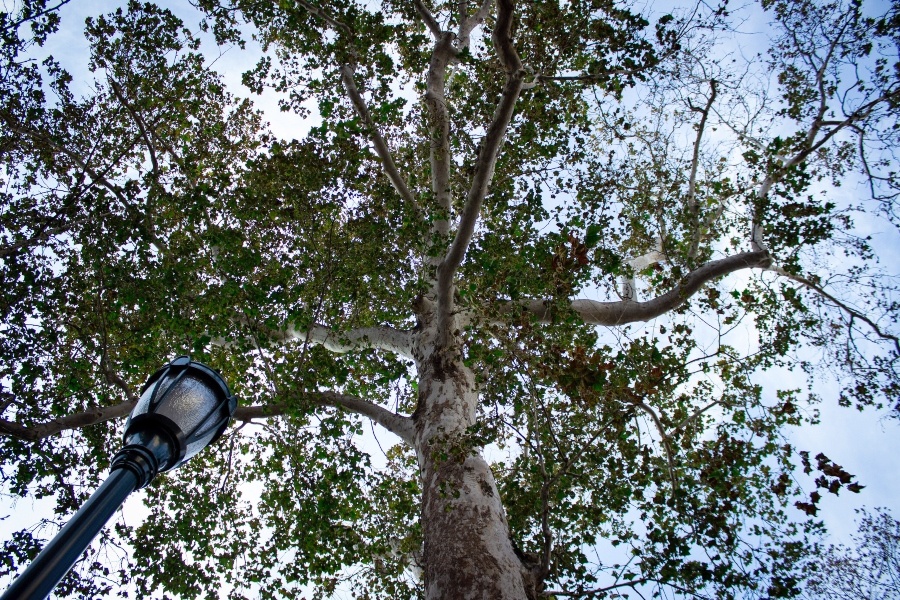 The stench of shed gingko berries has been compared to “dirty gym socks, vomit or poop.” During the two months a year when the fruits fall, you should avoid strolling through a gooey mess of them on the sidewalk and then going anywhere important wearing the same shoes.

But while the gingko tree is notorious for the unpleasant reek its berries bring each October and November, it’s also a gorgeous tree, with fan-shaped leaves that twirl to the ground when the air cools, sometimes still a lively green, other times creating a deep gold blanket. And it’s not unusual for most of a gingko tree’s leaves to fall in a single dramatic day.

People love gingkoes (aside from their smell). Their nuts are a popular food in China, Japan and Korea (and in Asian markets in Philadelphia). And their fallen leaves make for a lovely photo backdrop. Here in Philadelphia, we’ve got a special connection to the gingko: The first of the species in the United States came to our city in 1784, to William Hamilton’s Woodlands estate (now known as the Woodlands Cemetery in West Philadelphia).

Prior to that, monks in Chinese monasteries had cultivated the tree since the 11th century. And before that, the gingko survived two of Earth’s five mass extinctions, including that of the dinosaurs, per the Seattle Japanese Garden. Because the gingko’s plant order dates back more than 200 million years, it’s often called a “living fossil.” Renowned botanical researcher Peter Crane surmises that “there is no other tree with a prehistory so deeply intertwined with that of our planet.”

So it only seems fitting that Philadelphia, home to the first gingko tree in North America, now boasts the continent’s oldest living specimen. You can find the ancient gingko in Southwest Philadelphia’s Bartram’s Garden.

If all of this tickles your inner arborist — or if you’re just itching for a reason to get out of the house — read on for a guide to some of the coolest and oldest trees in Philadelphia.

1. The oldest gingko in North America 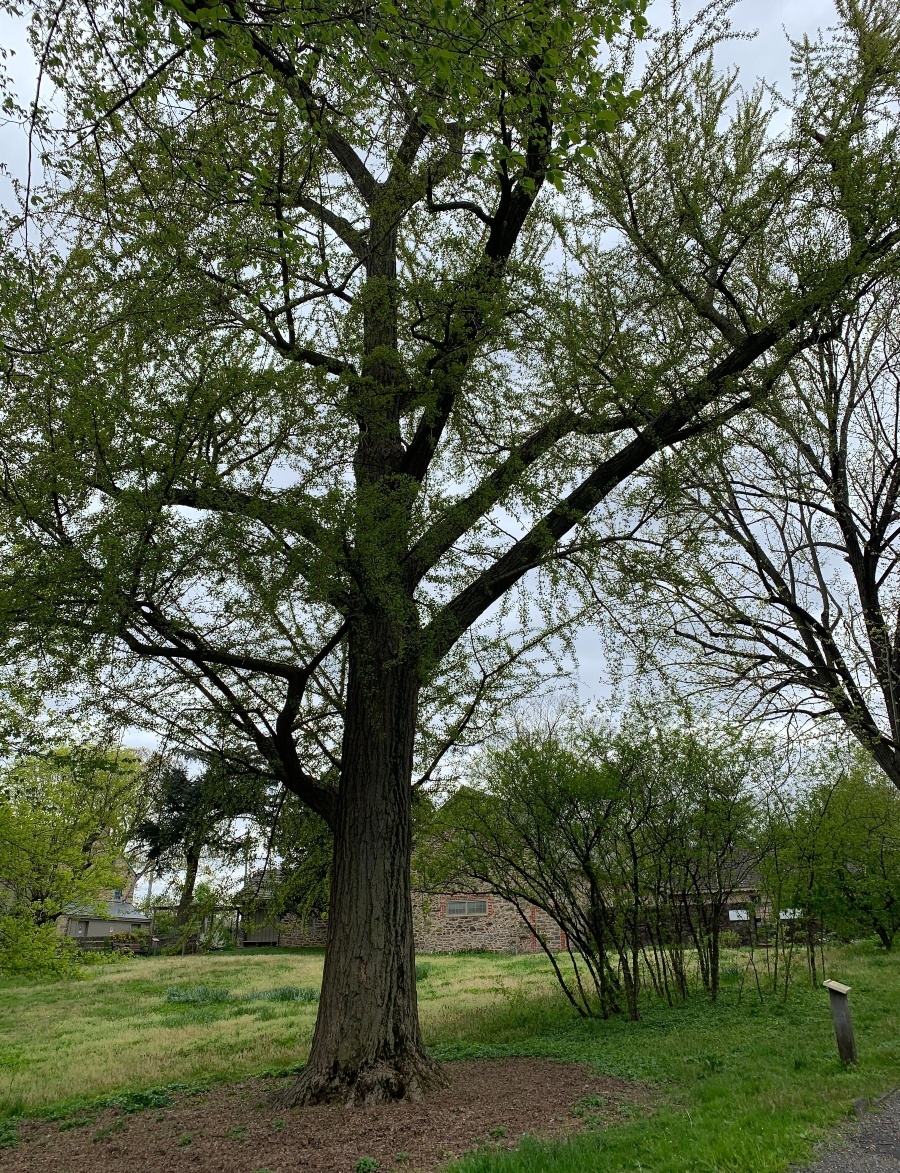 You’ll find the aforementioned Ginkgo biloba in Bartram’s Garden in Southwest Philadelphia. It’s one of the first three ginkgo trees sent to the country (the first two went to William Hamilton’s estate) and was gifted by Hamilton to naturalist William Bartram in 1785. It’s the sole survivor of the three.

The tree is located close to the main Bartram’s Garden buildings, downhill along the cement path past the courtyard adjacent to the barn. (You can use this handy map.) You’ll find a placard marking it. 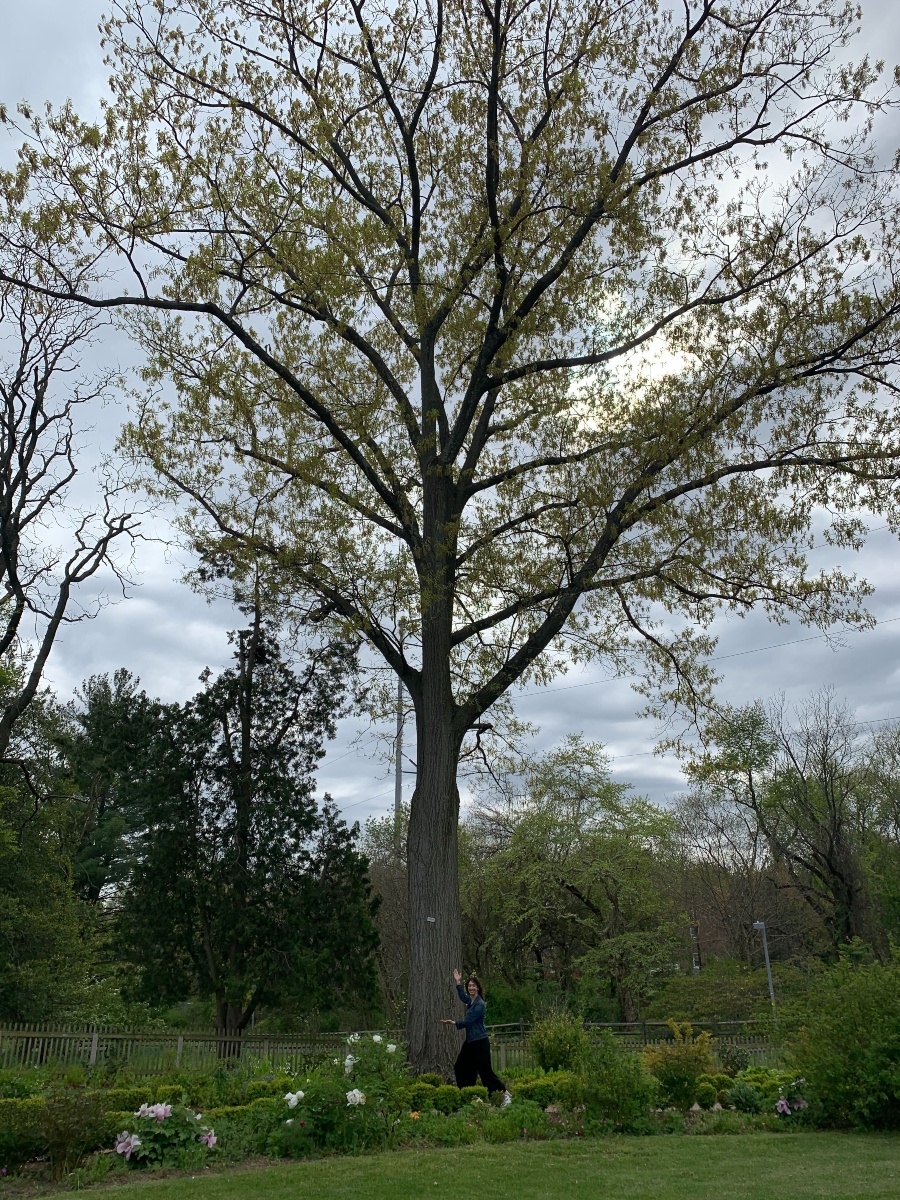 While we’re in Bartram’s Garden, I’ll highlight another of its trees: a Bartram’s oak, or Quercus heterophylla. This tree is nowhere near as old as the gingko, but it was planted in memory of John Bartram (William Bartram’s father) in 1939, during a convention of national park executives in Philadelphia. John Bartram first observed the specimen, named after him, near his garden on the banks of the Schuylkill River sometime in the 1740s. Bartram’s oak is a hybrid, and its seeds often resemble those of one or the other of its parents — the red oak and the willow oak. You’ll find this tree near the Ann Bartram Carr Garden. 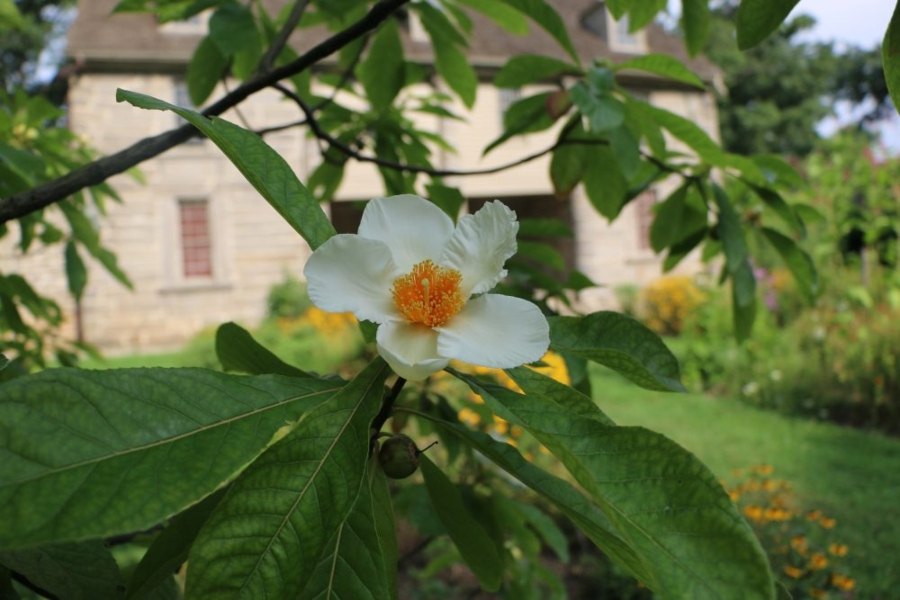 One more Bartram’s tree before we leave the garden: The Franklinia alatamaha is the Garden’s signature tree. The species was first discovered by John and William Bartram along the Altamaha River in southern Georgia in 1765. William brought some of its seeds to the garden in 1777 and named the plant after his father’s friend Benjamin Franklin. His seed stealth saved the tree from extinction: It hasn’t been found in the wild since the early 19th century, and all current franklinia are descended from those grown by the Bartrams. 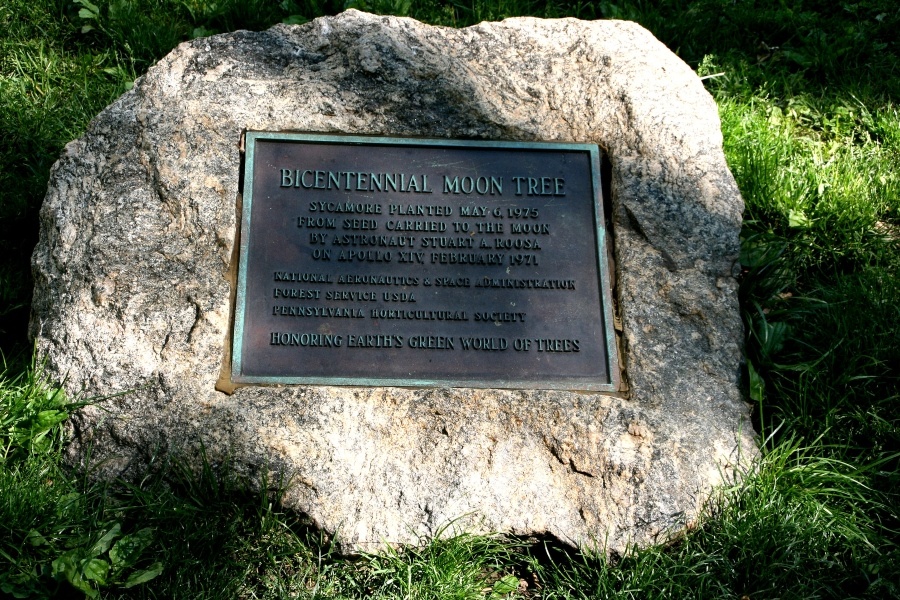 You are now leaving Bartram’s Garden … and heading to the moon. Okay, not exactly. But almost as exciting, our city was once home to a tree grown from a seed that had visited the moon, by way of astronaut Stuart Roosa, who carried it and others on one of his galactic expeditions. Roosa then helped plant the seed in Washington Square during the Bicentennial on May 6th, 1975, to “mark the contributions forests have made to our way of life,” according to NASA. Sadly, the original Moon Tree, a sycamore (Platanus occidentalis), died in 2008. Its base remained until 2011, when it was replaced with a “clone” — a tree grown from one of its cuttings (which apparently isn’t doing so hot either.) You can find plenty of old photos right here and on NASA’s website. 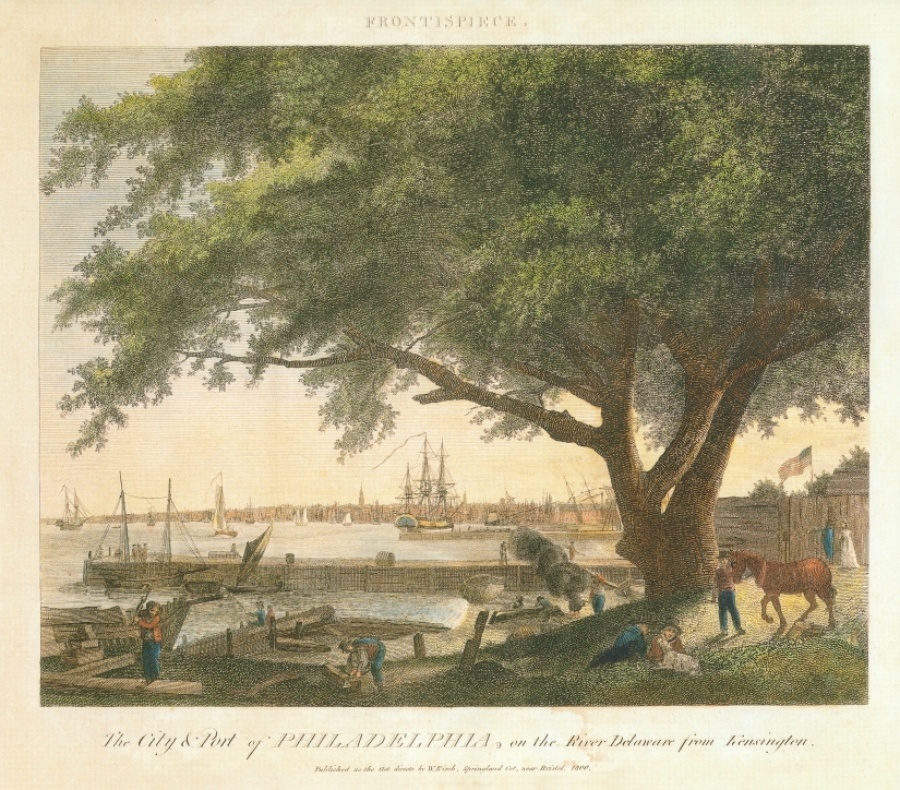 “The City & Port of Philadelphia, on the River Delaware from Kensington,” depicting Philadelphia in 1800

It’s said that more than 300 years ago, in 1682, William Penn made a peace treaty of friendship with the Lenni Lenape Nation under a large American elm tree in what is now Fishtown’s Penn Treaty Park. During the British occupation of Philadelphia, from 1777 to 1778, colonists hired a military unit to protect the tree, according to Ursinus College. The elm was eventually torn from the ground by a storm in 1810 and temporarily replaced with a monument. Generations of offspring of “The Great Elm” have been planted throughout the region, including at Ursinus and Haverford College.

In 2010, Philadelphia residents and members of the Nanticoke Leni-Lenape Tribal Council and the Penn Treaty Museum board met in the park to plant a seedling. 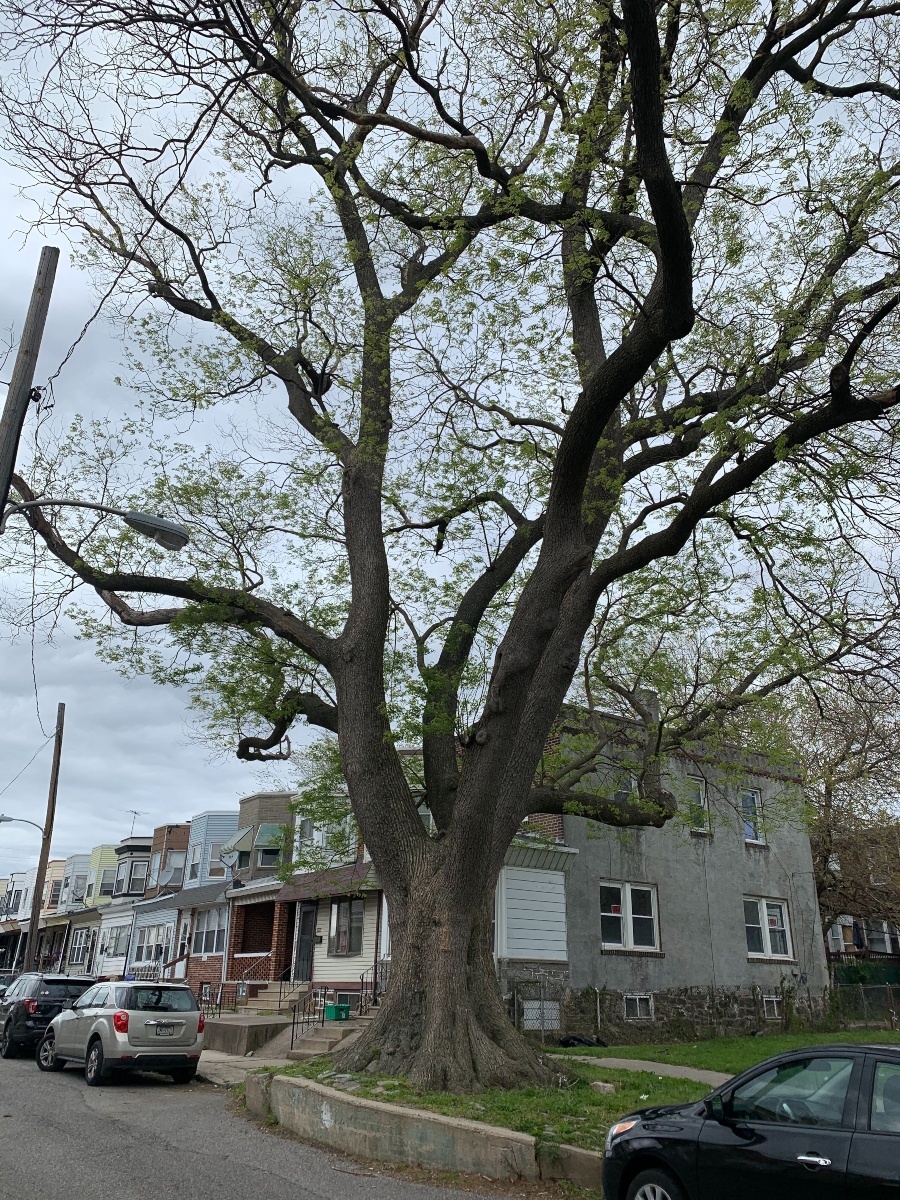 This must be one of the most beloved trees in Philadelphia, as proven by the fact that residents value it more than parking spaces. (They chose to forgo precious spots to preserve it.) The sophora (Styphnolobium japonicum, a.k.a. Japanese pagoda tree) sits on Hobson Street just north of Buist Park in Southwest Philadelphia and dates back at least to 1919, when the city arboriculturalist at the time, Samuel Baxter, wrote an article expressing his concern for the fact that the tree was endangered by housing construction. It’s still going strong today, and it’s a sight to behold.

A post shared by Wissahickon Environmental Cntr (@treehousewec) on Jul 4, 2017 at 5:48am PDT

The Wissahickon Environmental Center’s “Great Beech” (a European beech, or Fagus sylvatica) dates back to the mid-19th century. It was planted between 1853 and 1862 by Richard Wistar, according to Friends of the Wissahickon. It’s one of the largest trees in Philadelphia (the largest is a katsura tree in Morris Arboretum), but after more than 150 years, its health is declining. The good news? “When a beech tree’s roots are damaged or the main tree dies, the root system begins to send up sprouts,” says Philadelphia Parks and Recreation staffer Joe O’Connor. “The Great Beech has produced several sprouts already, and one has been selected by the Wissahickon Environmental Center to be the successor to the Great Beech. In this way, the Great Beech will live on.”

You can find a map to the tree right here. 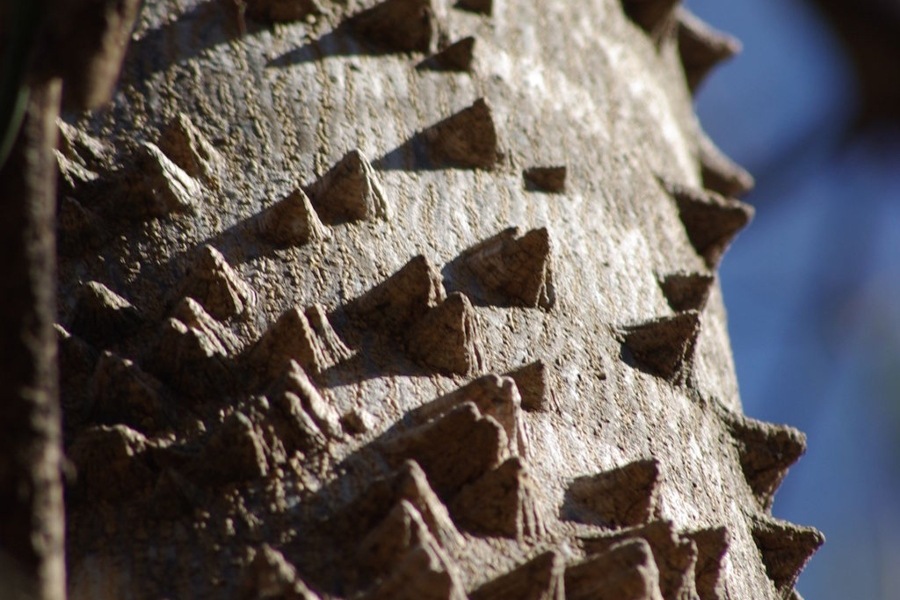 Prickly ash trees, or Zanthoxylum clava-herculis, a.k.a. Hercules’ Club, are known for their sharp, bumpy bark and are sometimes called “toothache trees.” You can find them at the beginning of the trail at the Pennypack Creek Environmental Center. You might not want to touch them, though. 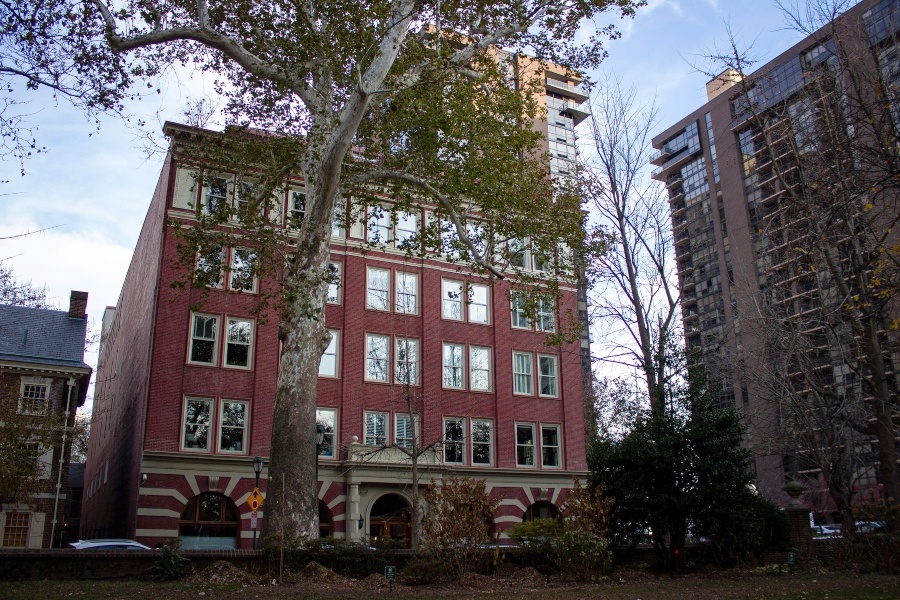 The Washington Square sycamore. Photo courtesy of the Department of Parks and Recreation

“There is a peculiar sycamore along 6th Street, just outside the walls of Washington Square Park,” says the Department of Park and Recreation’s O’Connor. “Despite its inopportune real estate, the tree is thriving and could be the largest sycamore in Center City. It’s just one of many large shade trees still standing in the square from an 1816 planting program.”

There may not be anything particularly remarkable or historic about this tree, O’Connor acknowledges, but it serves as “a testament to the power and longevity of planting programs, like the modern-day TreePhilly giveaway program by Philadelphia Parks and Recreation.” 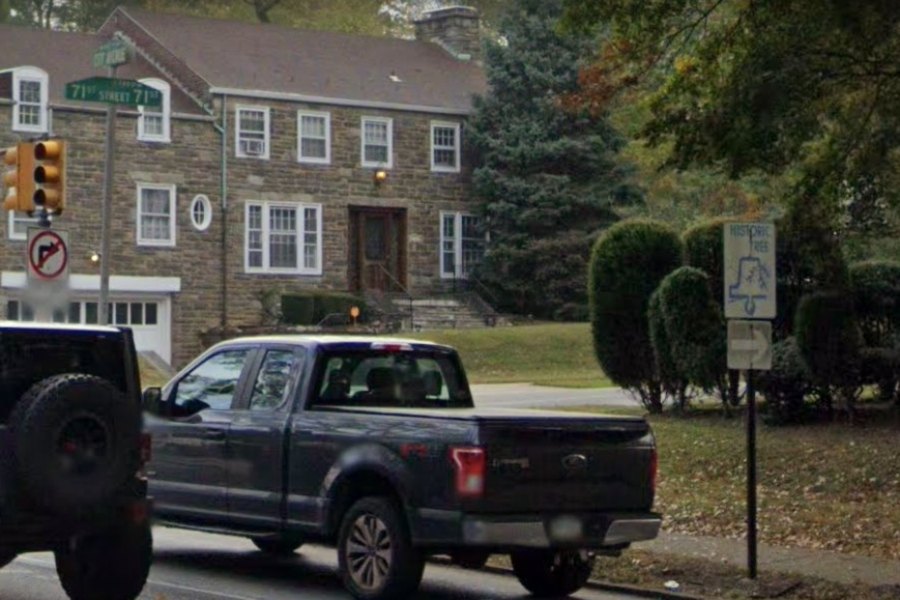 The sign was erected as part of a program during the Bicentennial celebration in 1976 to mark trees that existed when the Declaration of Independence was signed. A spokesperson for the Department of Parks and Recreation told the Inquirer he wasn’t sure when the tree was removed, but it was believed to be a large American hackberry.

Something worth noting beyond the solved conundrum, though: With or without placards, historic trees are all around us. You might walk by one (and probably have) without even knowing. Want to identify a tree you see? Visit the PhillyTreeMap online. And if you’re looking to take a historic tree tour, check out this field guide to local trees.