Less than three years after a judge sentenced him to a five-year term, the disgraced former district attorney is back in Philly at an undisclosed location. 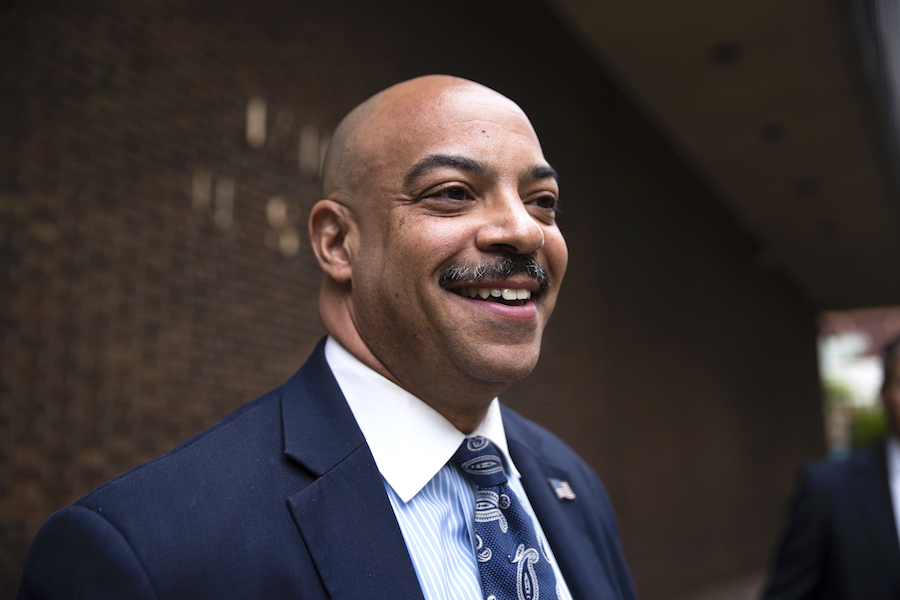 Seth Williams back in 2017 before he went away. The former Philly district attorney of Philadelphia was just released from federal prison. (AP Photo/Matt Rourke)

It’s been a while since we gave former Philadelphia district attorney Seth Williams even a scintilla of a thought. Oh, come to think of it, it was actually just back in February, when we published “The Utterly Ridiculous History of Lawbreaking Philly Politicians.” But who’s counting?

Point being, Williams, once very much a cigar-chomping man about town, has been completely absent from Philadelphia, having found himself locked up in a federal prison in West Virginia since 2017. But no more.

According to a spokesperson for the federal Bureau of Prisons in Washington D.C., Williams left the federal prison in Morgantown, West Virginia on April 23rd. Authorities transferred Williams from the prison into “community custody” in Philadelphia, which likely means that he is under some form of house arrest.

But the Bureau of Prisons would not disclose any further details about his location or status, other than to say that Williams is under the “operational control” of the Philadelphia Residential Reentry Management field office.

In case you can’t quite remember why Williams was sent to federal prison in the first place, don’t feel bad. After all, with all of the corruption (and alleged corruption!) and other forms of lawbreaking (and alleged lawbreaking!) perpetrated (and allegedly perpetrated!) by elected officials in this city, it’s hard to keep track.

In March 2017, the Department of Justice unveiled a 50-page, 23-count indictment against Williams, charging him with bribery, extortion and other offenses. Two months later, the feds added even more charges.

Prosecutors accused Williams of accepting more than $175,000 in undisclosed gifts and other illegal activities. But the icing on the cake, as they say, was the accusation that Williams stole more than $20,000 that was supposed to be used to pay for his mother’s nursing home care. Prosecutors said that Williams instead used it to pay his own personal expenses.

In the end, Williams made a plea deal in June of 2017. He pleaded guilty to one count of bribery. But part of the plea agreement required Williams to admit to some of the underlying accusations surrounding the other counts, without actually pleading guilty to them.

Judge Diamond was no fan of Williams. After all, Williams was the guy elected to put criminals in jail.

At the sentencing hearing, at which Diamond gave Williams the maximum sentence allowed by law, the judge said that Williams “fed his face at the trough” at taxpayers’ expense. After Williams asked for a temporary release so he could visit his mother, Diamond lambasted him.

“The English language doesn’t have the words to capture the outrageousness of that request,” Diamond declared from the bench. “The defendant stole from his mother, and now he wants to visit her.”

“Almost from the time you took office, you sold yourself to the parasites you surrounded yourself with,” Diamond added. “You humiliated the men and women of the district attorney’s office.”

So what happened to that five-year sentence? Williams got one year deducted for good behavior. And then he participated in a drug rehabilitation program.

“With credit for good conduct time, Williams’ sentence would end on September 30, 2021,” explained Robert Zauzmer, the lead prosecutor on the case, in a statement. “However, while in custody, Williams participated in the Residential Drug Abuse Program (RDAP), which is BOP’s most intensive substance abuse rehabilitation program, for which an inmate may receive a one-year reduction in custody upon successful completion. Williams’ sentence is therefore presently scheduled to end on September 30, 2020, and he was recently transferred to community confinement as is customary for inmates nearing the end of a term of imprisonment.”

Williams is still technically in federal custody. After that ends in September, he still faces three years of probation. There’s also the matter of tens of thousands of dollars of restitution that Williams was ordered to pay by the judge.

Williams could not be reached for comment. The attorney who represented him at trial did not reply to requests for comment.

This story was updated with a comment from the DOJ.