A 75-seat theater set to open this spring on Baltimore Avenue is giving local cinephiles hope — despite the Ritz at the Bourse closure. 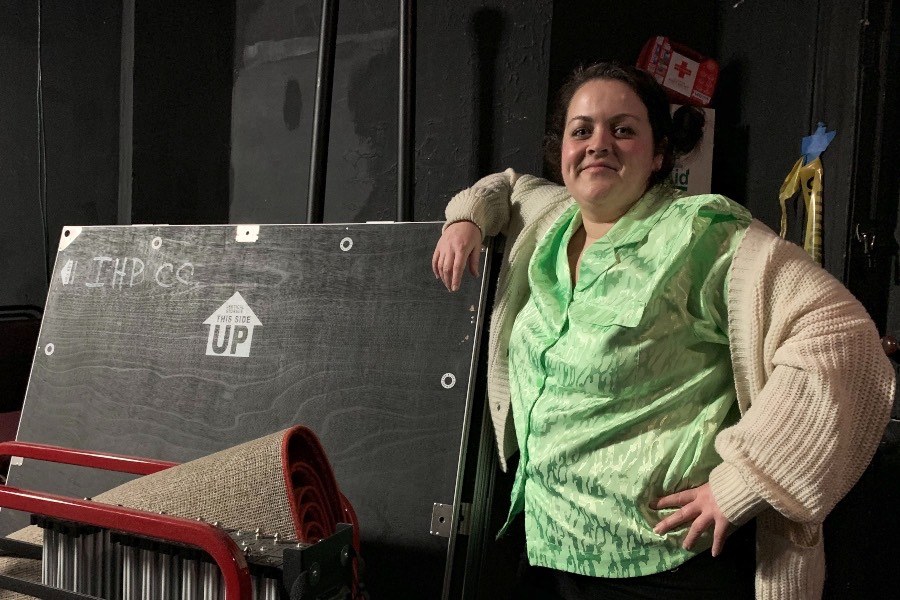 Like many other cinemagoers, I was crushed by the recent closure of the Ritz at the Bourse — the latest theater to shut its doors in a city that was once home to more than 400 movie houses. So I was relieved when one of the city’s most energetic film fanatics sat across from me in a West Philly coffee shop and convinced me that Philly’s indie-cinema community is alive and well.

Sarah Mueller, 35, is the founder and director of CinéSPEAK, a Philly-based organization that champions cause-based filmmaking in the city. Since Mueller started CinéSPEAK in 2013, she has roved the city with a small, mobile film screen, holding events in various neighborhoods and often praying the weather would hold up. But now, as one iconic theater closes, CinéSPEAK moves into a home of its own.

This spring, Mueller’s organization will settle into a church and community space in West Philadelphia. Its 75-seat “microcinema” (which will also feature a few couches and cushions) will debut several months after the neighborhood bids adieu to its staple art-house cinema, Lightbox Theater, which operated out of the soon-to-shutter International House at 37th and Chestnut streets. Lightbox will move to the University of the Arts in Center City later this month.

With the help of Robert Cargni, the longtime International House film projectionist, CinéSPEAK is transforming a black-box room in the basement of the historic Calvary Center for Culture and Community at 48th and Baltimore into a cinema with “super-high-quality” projection and sound, Mueller says.

The theater is expected to showcase its first film sometime in April, with weekly programming starting in June. Expect independent contemporary and repertory films (Mueller referenced the complicated New York City ’80s drag scene documentary Paris Is Burning, which CinéSPEAK previously presented in the neighborhood to raise funds for the Trans Equity Project) as well as advocacy-oriented cinema.

The latter is part of CinéSPEAK’s efforts to emphasize “responsible” film curation with a “talk-back element,” Mueller says. Such programming will include events like Q&As and listening sessions centered on films pushing for social change and typically created by filmmakers who have experienced the issues presented in their work firsthand.

“A lot of people who come to our screenings are film enthusiasts — they want to see exciting work that will stimulate and entertain them,” Mueller says. “A lot of others come to more advocacy-oriented films because they’re interested in an issue, either because it directly impacts them or because they’re trying to be good citizens and good neighbors.”

CinéSPEAK is “about asking, ‘What is this work for?’” Mueller explains. “That’s been our mantra. [Corporate] movie theaters are moving toward making money and getting butts in seats, but there are so many incredible filmmakers and distributors just trying to get their films presented and thinking of more thoughtful ways to engage audiences.” 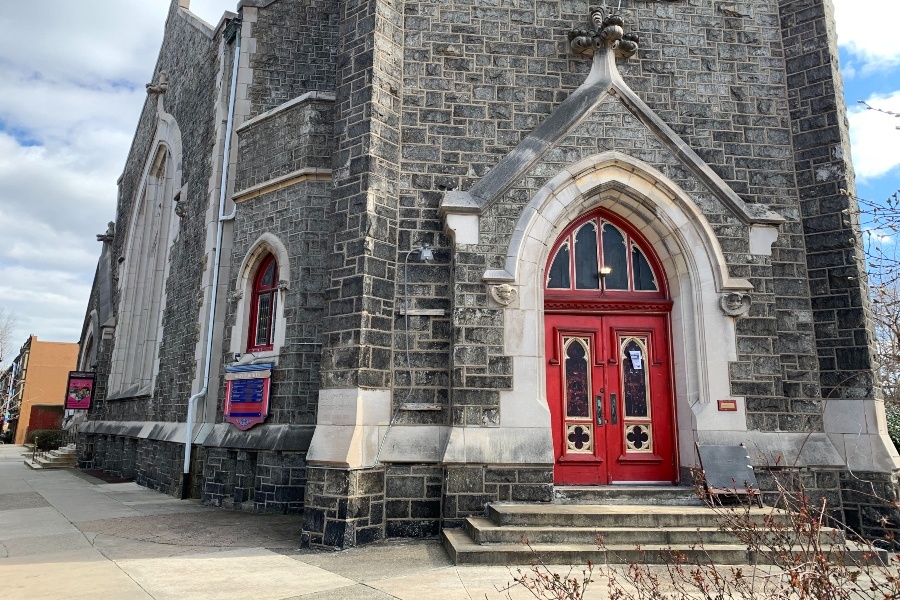 The Calvary Center for Culture and Community at 48th and Baltimore, the future home of West Philly’s microcinema / Claire Sasko

“Our Film Scene Here Is Not Dying”

Mueller, who wears her brown hair in a messy up-do when I meet her, has bright blue eyes and speaks quickly and passionately about film. She moved to Philly from Lancaster County to study film and video production in the early 2000s. While at school, she worked at the beloved TLA Video store at 15th and Locust streets. (Unfortunately for film lovers, it closed in 2011.) After graduating, she spent a year in Americorps at the Cardinal Bevilacqua Community Center in Kensington, where she led a digital storytelling program.

She then went on to work for Philly’s Scribe Video Center, which was founded in 1982 by filmmaker Louis Massiah. (He produced and directed the 1986 MOVE documentary “The Bombing of Osage Avenue” as well as films on civil rights activists like Philly’s Cecil B. Moore and W.E.B. Du Bois.) For decades, Scribe’s mission has been to explore film as a tool for social change by connecting diverse economic and cultural communities to media production facilities.

“Arts have a reputation for being elite and exclusionary because they are cost-prohibitive,” Mueller says. “Scribe was really informative to me. It leveled the playing field. For anyone doing independent film work in Philly, most of us can trace our work back to Scribe.”

After that, Mueller joined the staff of Philly’s annual Blackstar Film Festival, which showcases work by black, brown and indigenous filmmakers from around the world. Both Scribe and Blackstar are still thriving today — which is why Mueller is so adamant that despite the loss of theaters like Ritz at the Bourse, Philly’s indie film scene is indeed flourishing.

“Blackstar, and the work Scribe has been doing, is so revolutionary,” Mueller says. “Philly has been presenting some of the most provocative work, and it’s been an honor to be involved in some of that.”

Mueller launched CinéSPEAK in 2013 after noticing a gap in film programming when events like Blackstar and the Philadelphia Film Festival weren’t running. Plus, she says, Philly missed out on a lot of prominent films being showcased in other cities. She began reaching out to filmmakers and film distributors herself, aiming to convince them to bring their work to Philly — if only for one mobile showing.

Mueller likened her strategy to “throwing a party for a film … kind of the best experience a film can get.” For example, thanks to her mobile screen, she was able to hold a sunset “pre-party” and screening of “Sun Ra: A Joyful Noise,” hosted by CinéSPEAK in conjunction with International House, this past September; it included a conversation with filmmaker Robert Mugge and Philly DJ/music journalist John Morrison.

“I hear things like the Ritz at the Bourse is closing and Lightbox is leaving West Philly, and I say … ‘Yes, and?’” Mueller says. “Our film scene here is not dying. It’s more invigorated than ever before. There’s so much happening on the ground. You just have to know where to look.” 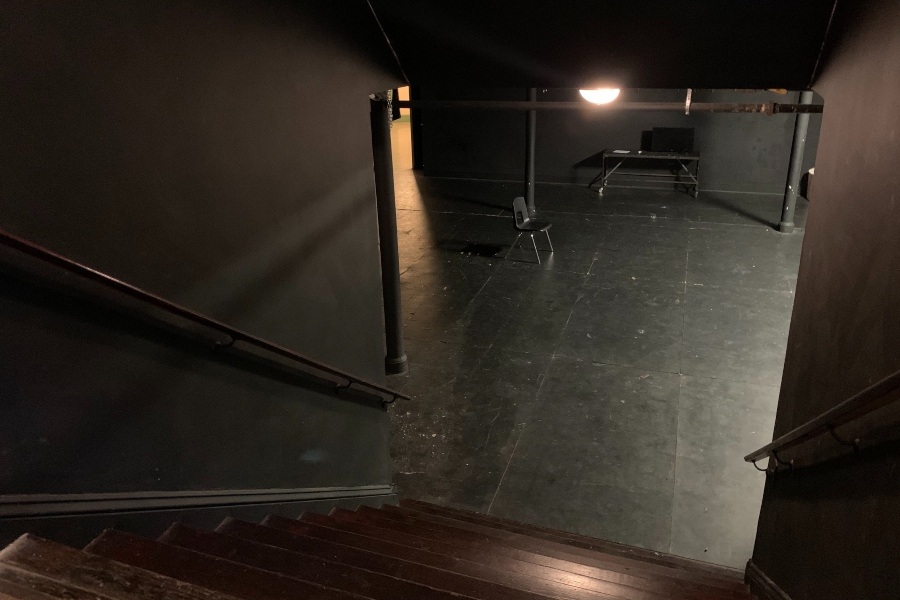 This black box will be transformed into the previously nomadic CinéSPEAK’s permanent home. / Claire Sasko

What Else to Expect of the New Theater

CinéSPEAK will continue similar programming at its new space, Mueller says, which will make hosting film “parties” much easier (and, with mobile events costing $1,000 to $1,500 on average, she says, more cost-effective).

She stressed that CinéSPEAK’s first year in the new space will be somewhat experimental: Over the next few months, she and other CinéSPEAK staffers (there are only a few) will meet with community members to get a feel for what kind of programming and prices are expected in the area. The organization’s next community listening session (at which CinéSPEAK employees and volunteers will give project updates and “hear what [community members] want to talk about”) is planned for March 7th at Dahlak Paradise on Baltimore Avenue.

And when the new wheelchair-accessible West Philly theater is completed? Expect a street-level box office, a concession area with a popcorn machine (which I’m especially thankful for after the one at the Roxy disappeared), and, in the long term, bulk candy. Film tickets will likely be $10 and under, with the average price around $8, says Mueller, who also plans to hold several low- and no-cost events, especially for family-oriented viewings. The organization will launch a funding campaign in mid-March.

“You’ll get the full cinematic experience,” Mueller says of plans for the theater. “The quality will be really rich. You’ll also find a nourished audience that feels like the theater actually listens to them.”