The man known on his birth certificate as Michael Grant claims police "ordered" him to stop preaching at, ironically, Christmas Village in December. After that, he says, he was "dragged across the street" by cops. 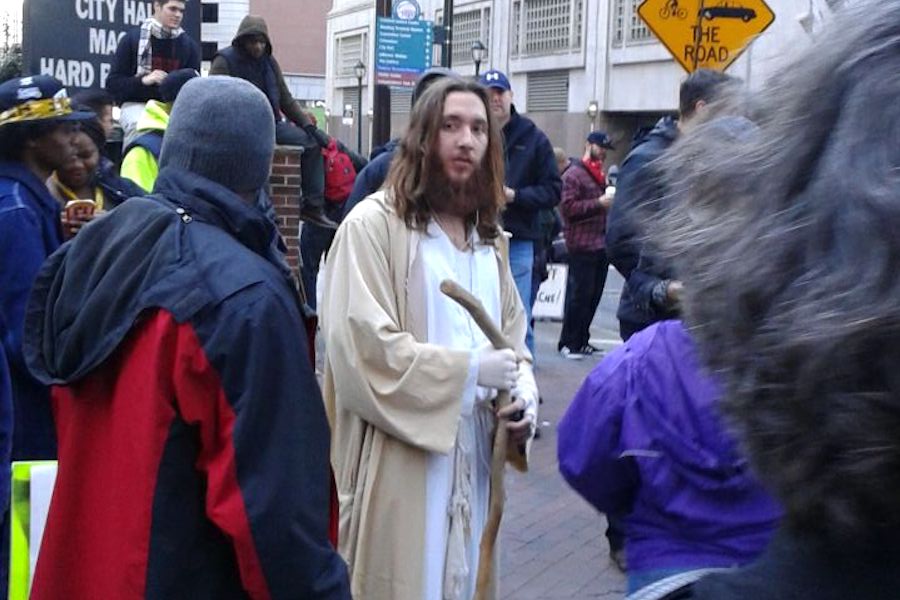 Michael Grant, a.k.a. the street preacher Philly Jesus, is filing a lawsuit against Philly police and the city, claiming they violated his First Amendment rights. (Photo by Troy Robert Morris)

It’s been quite a while since I wrote about the man known best as Philly Jesus. The last time was way back in 2016, when Philly Mag covered his arrest and subsequent conviction involving an incident at the Apple Store on Walnut Street. Well, Philly Jesus is back, and police are involved once again. But this time, Philly Jesus is suing the police and the city.

Philly Jesus, who is actually 33-year-old Michael Grant, is a bit of a Philly character. Some might call him a buffoon or an attention-starved charlatan. There are those who have deemed him a “homophobic bigot,” thanks to negative statements he made about the LGBTQ community after appearing, in an apparently supportive way, in a big Philly gay pride parade.

Technically, the lawsuit hasn’t been filed yet. The complaint is available in Philadelphia’s federal court. But a lawsuit isn’t actually “filed” until the $400 filing fee is paid. According to his lawyer, Philly Jesus is homeless and broke and can’t afford to pay the filing fee. The judge needs to decide whether to allow the case to proceed without payment of that fee.

That being said, here are the allegations that Philly Jesus lays out in the complaint, filed by attorney Vicki Piontek.

According to Philly Jesus, as stated in the complaint, he was “preaching peacefully” on December 21st in the area outside City Hall known as Christmas Village. (I’m kind of shocked that this setup in a public space is allowed to be called “Christmas Village” as opposed to “Holiday Village,” but that’s for another story.)

The street preacher claims he was holding a sign that read “If you die, are you going to Heaven? Find out here.” He also says he had a basket out for those who chose to donate to his cause.

The complaint alleges that a Philly police officer walked up to Philly Jesus and “glared at his sign with disapproval” before the cop “ordered” Philly Jesus to “stop preaching.”

Philly Jesus refused to leave the area. He says, in the lawsuit, that he “asserted his right to remain in the area and to preach and to evangelize and to exercise his First Amendment rights in that public area.”

After he declined the alleged demand to stop preaching in Christmas Village, Philly Jesus claims that two cops “dragged” him across the street and placed him in handcuffs.

In the end, the complaint alleges, Philly Jesus wasn’t charged with a crime but instead was issued a citation for “failure to disperse,” which is a non-criminal offense.

Philly Jesus accuses the police and city of violating his civil rights as guaranteed under the First, Fourth and Fourteenth Amendments to the Constitution and seeks unspecified damages.

The Philadelphia police department doesn’t comment on pending ligation. Neither does the City of Philadelphia.

I reached out to attorney Piontek to ask if I could interview Philly Jesus for this story. That interview didn’t happen, but Piontek, who says she’s representing Philly Jesus on a contingency basis, offered me this:

Notably, Piontek is based outside of Philadelphia, so I asked her how the, er, hell such a downtown character like Philly Jesus wound up with her.