Looked at objectively, the talented young center’s run-ins with other players are the behavior of a bully and a troll. 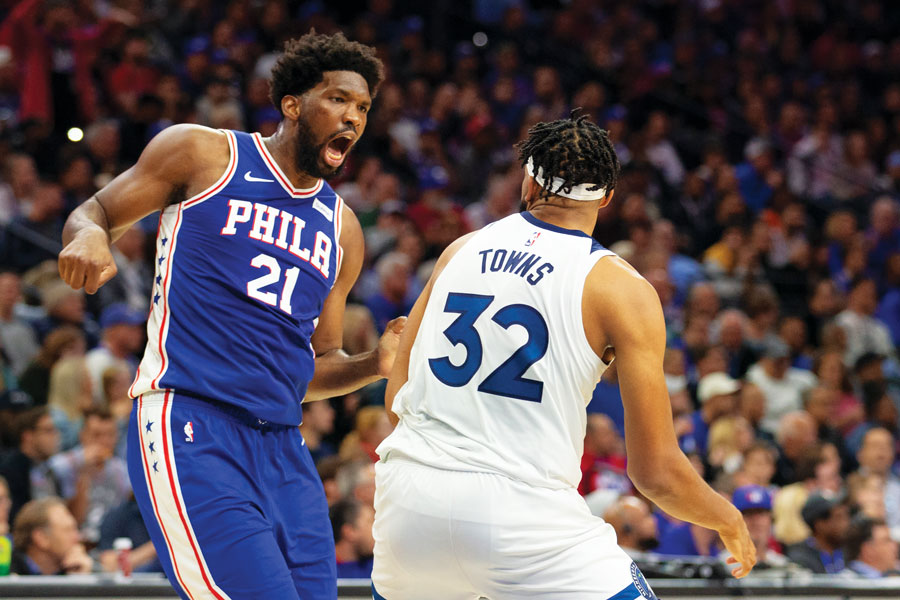 From the day Joel Embiid was drafted by the Sixers, the center’s impish social media presence was a delight — a welcome contrast to the joyless self-seriousness that dominates much of public life. Back in 2014, long before Embiid ever stepped onto an NBA court — he lost his first two seasons to foot surgeries — Philly Mag’s Dan McQuade wondered: “Will Joel Embiid’s Basketball Game Be as Good as His Twitter Game?”

In his first month with the team, Embiid playfully courted LeBron, wooed Rihanna, and clowned ESPN. After the brooding, petulant Allen Iverson/Larry Brown era, this was a revelation. This guy was fun. Magical. And the mirth continued as Embiid blossomed into stardom.

But early this season, Embiid’s magic stopped working on me. This was the result of his much-publicized dustup with Minnesota center Karl-Anthony Towns. Embiid and Towns spent the first half of their October 30th matchup jostling in the paint — a battle Embiid was winning handily. In the third quarter, after Embiid stripped Towns, the two became entangled, then exchanged blows, leading to a benches-clearing brawl and suspensions for both. And, y’know, fine. This stuff happens in the heat of the moment when big-ego men tangle in the arena.

But it’s what happened when the beef spilled over onto social media that has me questioning my membership in the Joel Embiid fan club. After Embiid had schooled Towns on the court and in the ensuing tussle — which ended with the Sixer shadowboxing for a whooping crowd and Towns face-down on the floor in a Ben Simmons headlock — he took to social media to call Towns a “pussy,” brag about making the playoffs last year, and then proclaim, “It’s a known thing that I OWN YOU.”

That tough guy act ain’t cutting it …. you know what you are.. you know what you’ve always been>>> A PUSSY (SAY IT LOUDER FOR PEOPLE IN THE BACK) Been kicking your ass and pretty please make the playoffs before you talk. It’s a known thing that I OWN YOU. @KarlTowns pic.twitter.com/Izqwk3pEnM

I get that we’re in a golden age of NBA trash talk and that Embiid is a gifted practitioner, but:

Watching this all unfold, I suddenly couldn’t help but see Embiid, if even just briefly, the way the rest of the league appears to: as kind of a prick. He’s more than talented enough to let his play speak for itself, yet he doesn’t. And he picks on guys he’s already bested. Looked at objectively, this is the behavior of a bully and a troll. And while that kind of player can be fun to have on your team, it gets harder to cheer for a heel, especially one who hasn’t won anything yet.

Published as “Troll Call” in the January 2020 issue of Philadelphia magazine.