SEPTA says it hasn’t had any complaints, but our tests yielded lackluster results. 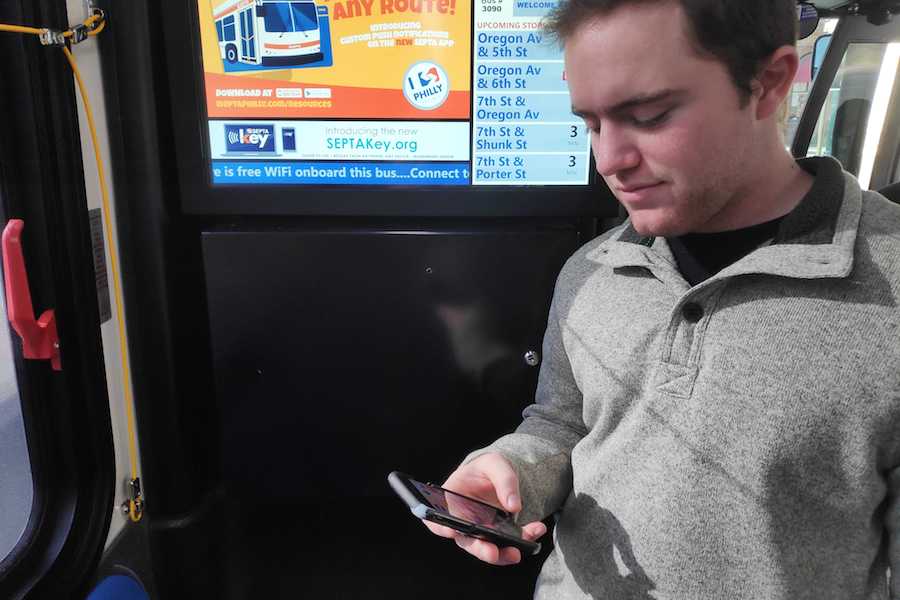 A SEPTA passenger attempts (unsuccessfully) to connect to WiFi on the Route 47 bus to South Philadelphia. (Photo by Sam Trilling)

The other day, one of my colleagues was riding SEPTA’s 42 bus to 15th and Walnut when he noticed a message crawling across the bottom of the upcoming-stop screen that exists on some buses, indicating that the bus was outfitted with free WiFi. He’s a regular bus rider and was unaware that SEPTA offered free WiFi on any of its buses, and I didn’t know either. But it turns out that there is free WiFi on hundreds of SEPTA buses.

After a pilot program on select buses back in 2017, the transit agency began rolling out free Wifi on its buses about a year ago. Today, 332 of SEPTA’s approximately 1,400 buses are equipped with free WiFi, mostly on the 3000 series New Flyer Xcelsior and 900 series Proterra electric buses. That number will continue to grow, as all new buses delivered to SEPTA have on-board WiFi.

If you ride the Route 29 or Route 79 buses in South Philadelphia, you’re in business, because both of those routes are served exclusively by the electric buses, and all have free WiFi. Otherwise, it’s the luck of the draw.

“[The buses with free WiFi] are spread out throughout the system so that we can reach as many passengers and parts of our service area as possible,” explains SEPTA spokesperson John Golden.

While many SEPTA stations offer free WiFi, SEPTA’s buses are the only vehicles in the system that sport the technology. There are not currently any plans to add free WiFi to the Broad Street Line, Market-Frankford Line, the Regional Rail trains, or SEPTA’s various trolley routes.

If you want to see if the bus you are on has free WiFi, you can check for that crawling message on those electronic display screens, or you can just look for SEPTAWIFI on your list of available networks. After selecting SEPTAWIFI from the menu, all you have to do is accept the terms of service, and you’re good to go. Well, maybe.

We sent a team of team of 10 bus riders out to test the service, and results weren’t exactly stellar. Only a few reported good results, and one of those testers said she had no problems at all and was able to stream video. The balance of testers either weren’t able to connect at all or were able to connect but had intermittent service.

“With a cellular-based network, there is always the potential for some temporary coverage issues,” says Golden. “However, we have not received complaints from customers about the network reliability.” (If the SEPTA WiFi isn’t working for you — or if you want to file any complaints with SEPTA — we’ve found the best method is the @Septa_Social Twitter account.)

According to Golden, approximately 6,000 bus passengers use free WiFi on the average workday, with an average usage of 28 megabytes per client per session.

SEPTA’s free WiFi program may not be perfect, but at least SEPTA is trying. Remember when, in 2004, the City of Philadelphia proclaimed that there would be free WiFi offered throughout the entire city within two years? Yeah, so much for that spectacular failure.