The city first said in 2017 that it would move the contentious 2,000-pound monument from Thomas Paine Plaza. 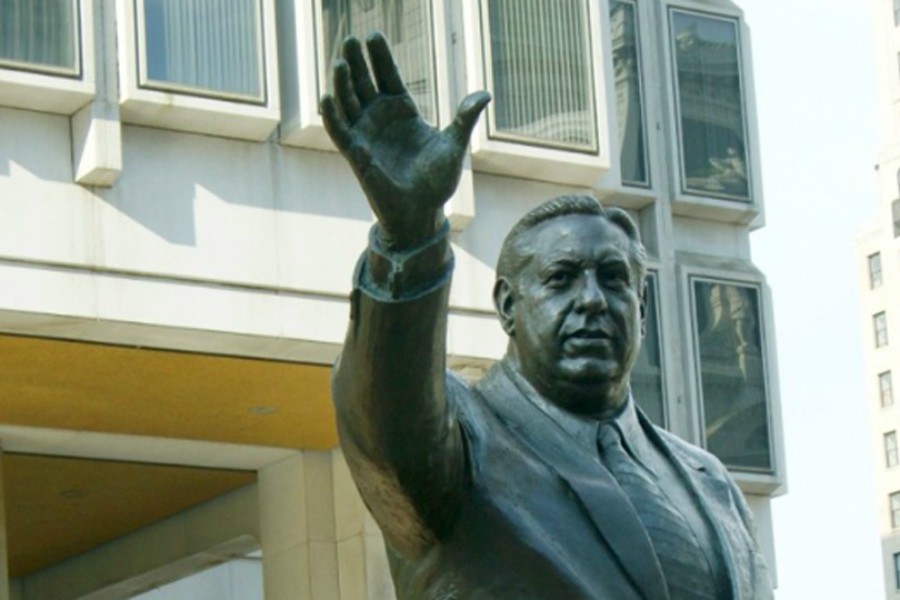 After a deadly white nationalist riot in Charlottesville, Virginia, in 2017 forced cities around the world to reckon with their Confederate and other controversial monuments, Philly announced that it would remove its Frank Rizzo statue from the steps of the Municipal Services Building.

In the weeks before the announcement, the statue had been egged and become the site of protests. More than 3,000 people signed a petition to take it down, while more than 20,000 others supported a petition to keep it in place. Those who sought to have the city relocate the monument decried Rizzo’s sometimes violent over-policing of the city’s black and minority communities, while those who wanted to keep it in place largely portrayed Rizzo, the city’s first Italian-American mayor, as a tough-on-crime politician with a blue-collar (and heavily white) support base.

The city pledged in November 2107 to move the statue from its post, where it has stood since 1998. But officials didn’t specify where they would relocate it — or release a clear timeline. All we knew back then was that the move would align with planned reconstruction of the nearby Thomas Paine Plaza, which officials said they were re-envisioning as “a new type of inviting and engaging public space,” more in line with popular spots like Dilworth Plaza and Love Park.

Now, the Philadelphia Tribune has reported that the statue will stay put until at least 2021. According to the publication, the city said it plans to move the monument sometime between June and September of that year, when reconstruction at Thomas Paine Plaza begins. (That means Rizzo supporters could get two more years to celebrate the late mayor’s birthday by singing Kate Smith’s version of “God Bless America” and dropping bread loaves at the foot of the statue, as they did earlier this week.)

We still know fairly little about where the Rizzo monument, which weighs 2,000 pounds, could go. Back in 2017, Kelly Lee, the city’s chief cultural officer, said officials were looking at a “host of potential new locations” and that once they chose one, it could take at least six months to prepare a proposal for the city’s Art Commission, which would then have to approve the move.

The mayor’s office said it’s considering several locations in South Philly and plans to reach out to community groups soon. Removing and relocating the Rizzo statue will cost at least $100,000, officials said, according to the Inquirer.

We might suggest putting all the city’s Rizzo monuments in one place: The plaza at 9th and Montrose streets, where a mural of the late mayor’s face already looms over Italian Market visitors. (That piece is also frequently vandalized.)