The masterminds of Glbl Vllg are turning spontaneity into art. 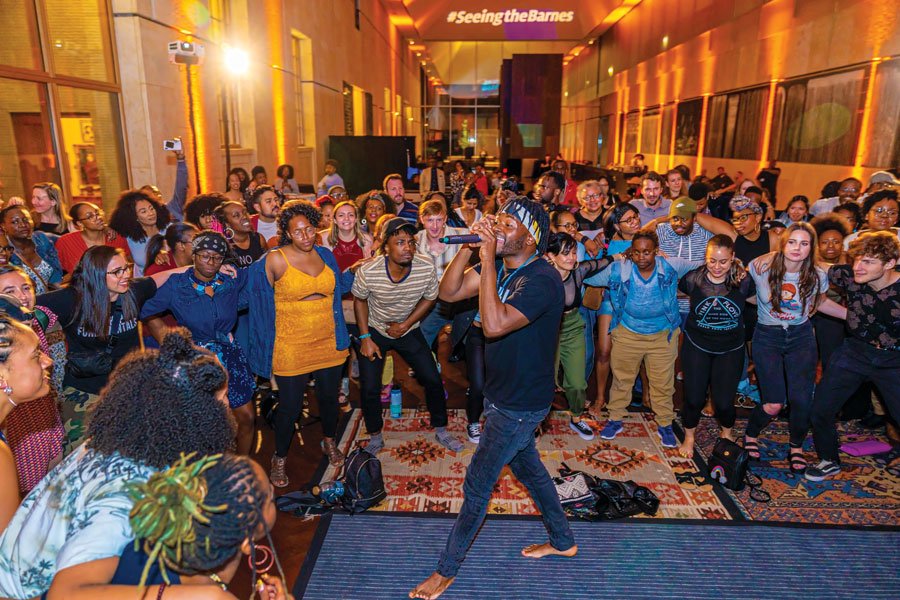 Accompanied by a soft melody and a chorus of claps, these words echoed across the main hall of the Barnes Foundation one Saturday evening in May. On the mic was Lyonzo Vargas. He sat on a rug with his legs stretched out before him, feet bare. His body swayed with every line he rapped out. Nearly 100 people formed concentric circles around him. Those closest sat with their legs crossed; behind them were kneelers. Additional rings of onlookers stood, forming a fortress of sorts.

The back of Vargas’s black t-shirt read “This is the Vllg,” signaling that this was another jam session led by Glbl Vllg, the new grassroots entertainment group (pronounced “Global Village”) with a simple mission: to bring people together for some fun, because “wellness” doesn’t only come in the form of a workout or meditation. Sometimes what feels good is just to let what’s inside out, and to push yourself to try something new. They host New Age open-mic nights at different venues across the city.

Glbl Vllg’s ground rules were in effect. The group’s key distinguishing factor is that “the audience is the headliner,” so if you were sitting on the rug, you were there to participate. The mic traveled from person to person, and every minute, an original poem, rap or song was born. Eight musicians armed with guitars and trumpets skillfully matched the flow.

You could tell the audience was stylish, even under the dim lights. Gold hoop earrings swayed with beats. Colorful head wraps, retro camo and chunky sneakers had their moments, too. Older audience members sat back in amusement, nodding to sounds that reminded them of days past. They looked proud of the generation sitting before them. Everyone was happy, encouraging; everyone was seen, since everyone was the star.

Vargas, his hair pulled back with a bandana, monitored the room to ensure that things ran smoothly. He had a mental plan for the path of the mic. He and the other Glbl Vllg emcees jumped in and out of the cipher to intentionally reset the energy and mood.

At one point, he stopped the set completely. “What genre?” he called out.

His question was met with “Funk!” “Hip-hop!” “Rock!” “Afrobeats!” “Reggae!” Then he initiated an Apollo Theater-style vote. The crowd screamed loudest for funk, and the musicians quickly launched into a beat.

And so the next person on the mic sang an impassioned tune with the lyrics “You are love, you are joy” to a brand-new funky rhythm.

Published as “Go With the Flow” in the August 2019 issue of Philadelphia magazine.