The 2020 presidential candidate told Pennsylvania senator Katie Muth to “keep persisting” after a video of a fellow lawmaker shouting over her went viral. 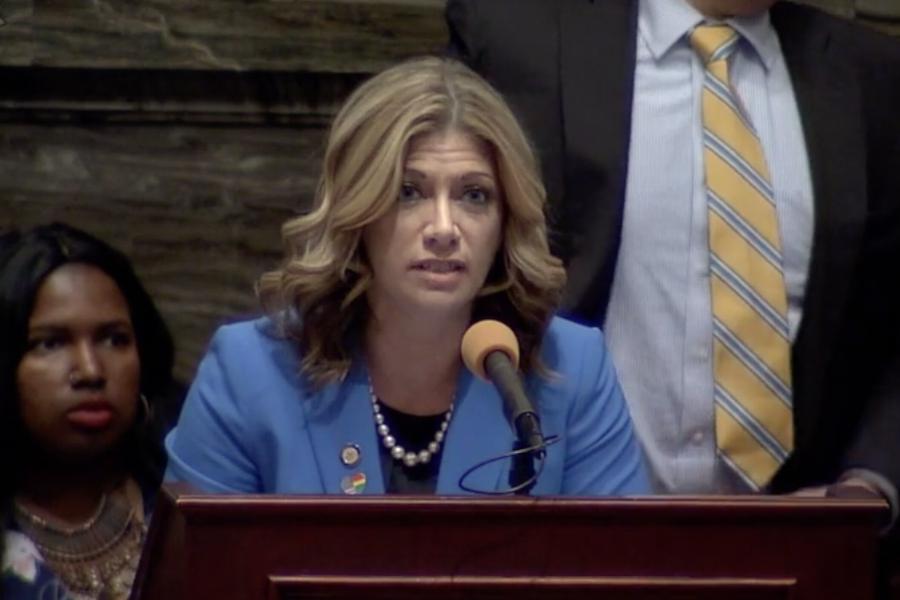 Image via the Pennsylvania State Senate

Montgomery County state Sen. Katie Muth is getting a lot of attention right now — including, most notably, from 2020 presidential candidate Elizabeth Warren.

Muth, a Democrat who was elected to represent Pennsylvania’s 44th District in 2019, stands at the center of a viral video depicting a state Senate meeting last week.

The video, which has been shared by progressive media platform NowThis, shows Muth reading a letter from a man named John Boyd on the Senate floor. In the letter, Boyd, who was homeless in Philadelphia for 25 years, expresses gratitude for the state’s General Assistance program, which he said is the reason he’s “alive today.” But what should be a heartwarming video might give you a minor headache to watch, what with Republican majority leader Jake Corman shouting over Muth for the entirety of the letter, which takes her three minutes to read.

Corman, who represents several counties in central Pennsylvania, attempts to interrupt Muth by calling for a point of order, which, as he’s pointed out, he’s permitted to do under Senate rules — but Senate majority leader and state Lieutenant Governor John Fetterman refuses to recognize him. So Corman keeps yelling at Fetterman … and doesn’t stop.

While Corman’s shouting might have drowned Muth out — or encouraged her to stop talking — she continues reading the letter until she finished. And many women and others who have watched the video online are heralding her for it — as is 2020 hopeful Warren.

“I’m sitting at dinner with my husband and saw your tweet,” Muth said. “Now I’m crying at dinner — thanks for inspiring me to be bold, brave and fearless.”

Muth has continued to share Boyd’s letter. In the video, she and other Senate members were debating the future of General Assistance payments, which provide about $200 a month to the state’s poorest residents. Boyd said that the funds helped him afford basic goods and services like toothpaste and bus fare. The program is estimated to cost the state about $50 million per year.

Despite Muth’s efforts, the state House and Senate passed bills last month — largely along party lines — which included plans to end the cash assistance program, effective August 1st. Democrats, including local lawmakers like state representatives Elizabeth Fiedler and Malcolm Kenyatta, had urged Gov. Tom Wolf to veto the measure ending the General Assistance program, which was part of a package of bills finalizing the 2019–20 budget. But Wolf signed the bill as part of the budget, noting that the budget included $15 million for low-income housing assistance, which Wolf said “will help a lot of the same individuals who previously received general assistance from the commonwealth.”

Muth called Republicans’ opposition to General Assistance “nothing short of an attack on the poor and working-class people in the commonwealth.”

In an interview with Philadelphia magazine, Corman said he did not intend to disrespect Muth — and that what caused the chaos was Fetterman’s “complete disrespect for the rules” of the senate, which Corman said required Fetterman to recognize his point of order.

“As I continued to be ignored and as he continued to disrespect the [senate] parliamentarian, obviously my anger increased,” Corman said. “There were lots of opportunities for any senate member to speak on [the General Assistance] issue or any other issue,” Corman said. “They chose not to do so until it was against the rules because they wanted a show, and that’s what they got.”