The department rejected a Philly Mag request for the list of officers, saying that “they have not been charged with a crime or a departmental violation.” 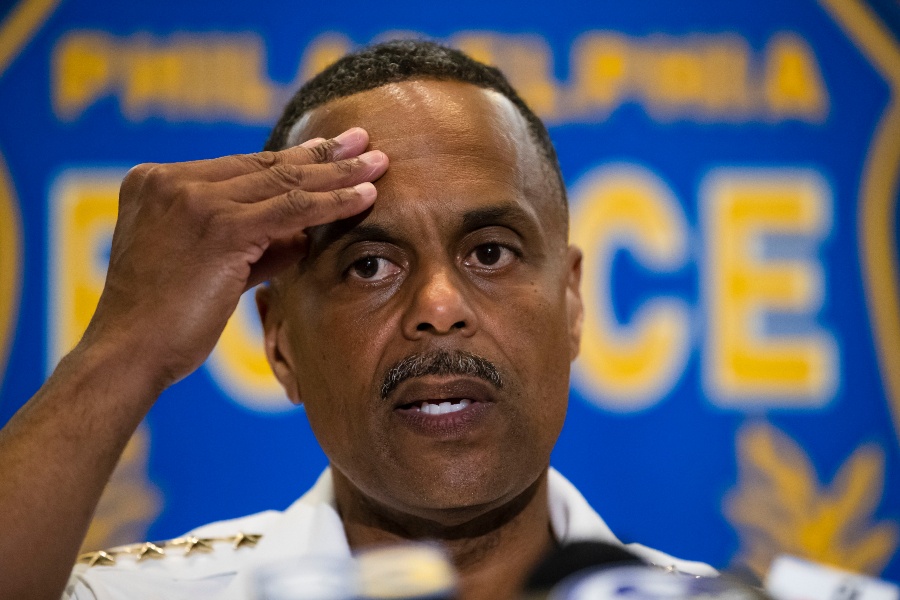 Seventy-two Philadelphia police officers have been placed on administrative duty following a legal advocacy group’s investigation into members of the department who had allegedly made racist, violent, or bigoted posts on social media.

The move, which police commissioner Richard Ross announced this week, comes after a probe by the Plain View Project, which flagged roughly 330 Philadelphia police officers for allegedly insensitive posts, sparking a protest outside department headquarters earlier this month. The Plain View Project has made public the names, badge numbers, salaries, positions, and service status of many of the officers identified.

In a press conference on Wednesday, Ross said the department’s Internal Affairs division had contracted the law firm Ballard Spahr for its own investigation into more than 3,000 potentially problematic social media posts by police officers. The probe has resulted in the largest number of officers placed on desk duty at one time in recent history, and it will likely result in the termination of multiple police officers, Ross said.

The 72 officers placed on desk duty were found to have made posts that “clearly” advocated for “violence or death against any protected class such as ethnicity, national origin, sex, religion and race,” Ross said on Wednesday.

And yet, despite the seriousness of those discoveries — and despite the fact that those officers are continuing to receive taxpayer-funded salaries as of Thursday — the department refused to identify them. In response to a request for a list of names by Philadelphia magazine on Thursday morning, the department said the names “will not be released at this time, because the investigation was internally initiated, and at this point in the investigation, they have not been charged with a crime or a departmental violation.”

However, this won’t be the last you’ll hear of the social media investigation: Ross said on Wednesday that the department will provide an update within the next couple of weeks regarding further discipline against officers, which could range from time off to termination. It’s not clear whether the department will release the names of officers who could be disciplined at that point, but the probe is ongoing and could involve cops not yet scrutinized.

Ballard Spahr is working to advise the police department on whether or not posts made by officers are constitutionally protected before action is taken. If speech is protected, the officers will not face discipline, Ross said. (Protected posts could include those that are of public concern, or publicly unpopular, but do not carry threats of violence against any protected class.) Instead, Ross said, the department is looking specifically at posts that “impact our ability to police.”

“If you are disparaging a particular race or religion or people, and that [disparagement] is tied to action-oriented speech — i.e. ‘Death to this,’ or ‘I hope all people of this race die’ — that is a major issue that transcends whether or not [the post] is of public concern,” Ross said. “We have to deal with the fact that you have gone beyond that scope, and you have now entered into an arena that is impacting our ability to police as a police department.”

In the meantime, the department is developing a training video for officers regarding policies on ethnicity, rape, off-duty policing and the department’s code of conduct, as well as its missions and value statement. Plus, Ross said, the department plans to audit officers’ social media posts moving forward.

Ross said the department doesn’t expect that taking certain officers off street duty as a result of the social media investigation will have a major impact. However, he said, “it would be totally disingenuous to say that [placing 72 officers on administrative duty] has no impact on us, because we would want them to be patrolling.”

Ross said because the officers placed on administrative duty represent only a small portion of the entire department (which consists of 6,500 officers) and the 72 offices in question are “spread out” throughout the city, he doesn’t expect the move to have “the profound impact that it could otherwise have.”

The investigation unfolds as Philadelphia police face an highly scrutinized uptick in gun violence and gun violations this year — as well as a particularly troubling Father’s Day weekend, during which a mass shooting at a graduation party in Southwest Philly on Sunday left one person dead and five others injured.

After that incident, State Sen. Anthony Williams, whose district includes the public park where the shooting occurred, called for the police department to ramp up patrols in the area while removing “the elements of law enforcement known to have intolerant views.”