For drivers and riders alike, the flat-rate offer has a fairly serious drawback. 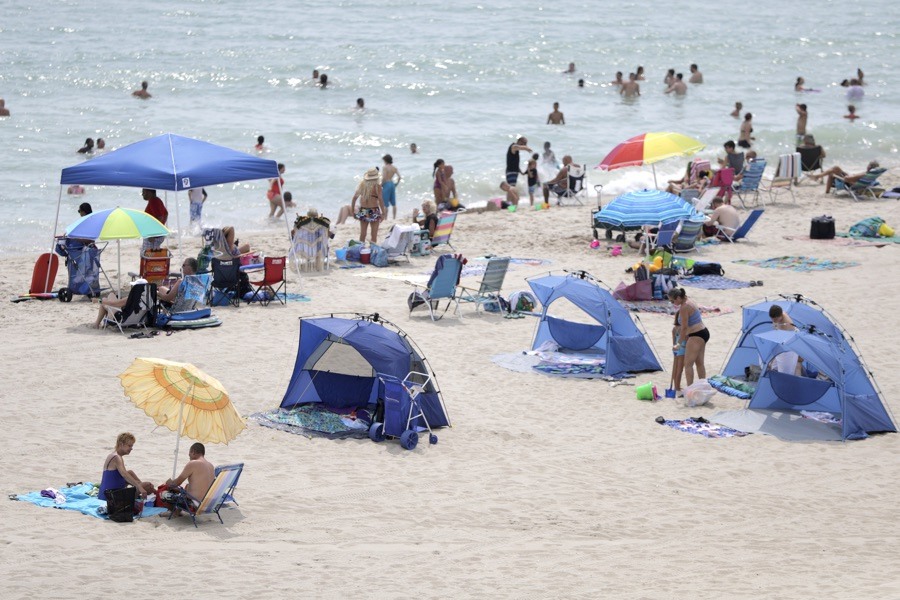 Shore-goers, who probably drove themselves there, enjoy the beach. Photo by Julio Cortez/AP.

This Memorial Day weekend, some 500,000 Philadelphians will leave the city to travel, and you can bet the vast majority will be taking the first of many pilgrimages this year to the Jersey Shore to be baptized in its cool, crisp waters.

But how will the masses actually get there? Most will probably drive their own cars. How quaint.

Lyft has a different option for those in search of true hands-free, door-to-dune service: For a flat fee of $110, starting this weekend and running every subsequent weekend until Labor Day, you can hail a ride in either direction between Philly and Atlantic City or the Cape May County beaches. (You just have to use a special promo code: BEACHPASSPHI.)

But is it actually a good deal? That depends on what your priorities are. For the penny-pinchers, you’ve got a full menu of cheaper options: bus from downtown Philly to Cape May ($24.75); train to Atlantic City ($10.75); bicycle ride (free, minus some serious sweat equity …). You could also rent a car for the weekend and drive yourself, retaining some autonomy, for around $100. Or, as of Friday morning, you could even take an Uber to A.C. — for just $90.

Of course by the time the seabound march really begins, the Lyft and Uber rates will surely increase. (Lyft has added the vague caveat that there are a “limited quantity” of Beach Passes available, and wouldn’t say how many that is.) The $110 price might end up looking like a steal by then — especially if you pack three friends into the car, which would mean paying $27.50 each. One Philly Mag staffer attests that he’s regularly seen Ubers and Lyfts to Cape May in the $240 range.

There’s just one problem for drivers and riders alike: getting back.

See, there’s no guarantee that the “limited quantity” will still be there for beachgoers at the end of a weekend spent sunbathing. The only thing worse than a sunburn is getting slapped with a massive $240 fare on the way home.

Meanwhile, drivers tend to detest these long trips because they can’t always get back home profitably. If you take a customer out to Atlantic City, you can still pick other people up in Jersey, but you’re about as likely to hit the jackpot on the slot machines at the Borgata as you are quickly finding a return fare to Philly.  And even though Lyft’s got a function where it will only find rides that take a driver in a particular direction, Jon Stoudt, who’s been driving with Lyft for three years, says it’s worthless. “Sometimes you end up going 15 minutes out of your way to get these people, and then they’re only going two miles. So now it’s further out of your way.” Eventually, a driver may have to deadhead the whole way back to Philly.

Lyft and Uber drivers have come up with a little loophole to evade these long trips. They don’t ever know where a destination is until they’ve arrived at the pickup location for a customer, but Stoudt says that he and his peers will often tell the Lyft app that they’ve arrived, when in fact they’re down the block — that way, they can vet a destination just out of sight from their customer. If they don’t want to end up going all the way to the Shore, they can cancel the fare without hassle. Martha Voorhees, another longtime rideshare driver, says she often travels from the Newark airport to Philly herself and struggles to find an Uber willing to take her home. “I get cancelled all the time,” she says. Not that she can really blame them.

So if you do end up requesting a Lyft to the Shore this or any other weekend, you should be prepared to wait a while. Don’t take it personally, though. Your drivers probably aren’t cancelling because they hate you. They just hate where you’re going. And if you can’t get the cheap $110 rate on the way back — well, there’s always the bus.