The twist? Investigators suspected the South Philly artist himself, says the artist's lawyer. 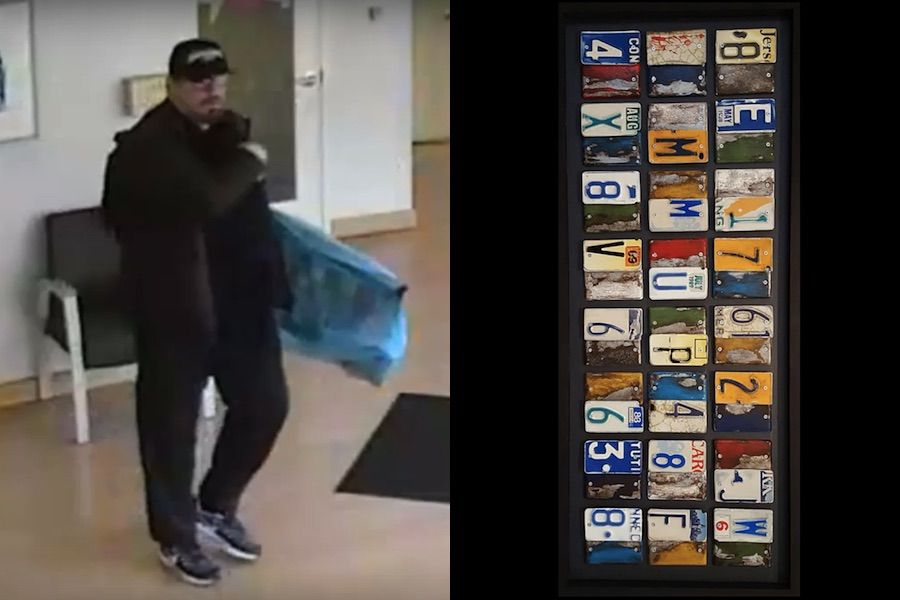 Left: The suspect in the art theft from Penn’s Perelman Center. Right: “34 Years in the Making” by artist Tim Barton. (Image from Philadelphia Police Department)

Some people make what they do look so absurdly easy. Case in point: this man who is currently being sought by the FBI’s art theft division for a brazen act at Penn’s Perelman Center.

The art theft occurred at the University City medical facility on April 4th at 1:12 p.m.

As you can see in the video below, the man in question walks into the Perelman Center, has a look around and then simply snatches the piece of art right off of the wall.

He wraps the art in blue plastic and proceeds down an escalator and out of the building, as if he had simply come in for a checkup. Then, it’s onto a Center City-bound train. Just like that.

The art in question is “34 Years in the Making” by South Philadelphia mixed-media artist Tim Barton. It is a collage of pieces of license plates from states in which the artist has been over the last 34 years.

In terms of monetary value, the artwork is not exactly the Mona Lisa. It’s reportedly worth less than $2,000.

But to Barton, there’s a lot more to it than the money.

“It took 34 years to assemble all the stuff for it, so there was really quite a lot of sentimental value there,” Barton told CBS last week. “How could you take it and just walk out of the building without one person saying, ‘wait!’”

We reached out to Barton on Friday morning to discuss the matter, and we were told to contact his attorney, Lauren Wimmer. But Lauren Wimmer is a criminal defense attorney, so why would Barton need to retain a lawyer of that speciality?

“Because he was the subject of their investigation,” Wimmer explains. “They had no other leads, so they just decided that he stole his own artwork. He looks nothing like the man in the video. It’s crazy. Actually, crazy is an understatement.”

Wimmer says that as far as she knows, Barton is no longer a suspect. One of the investigators attached to the case declined to comment.

Barton is part of the upcoming Visual Democracy exhibit inside City Hall. The juried art exhibit, which runs from May 13th through July 12th, celebrates the 200th birthday of Walt Whitman.

Anybody with information on the crime is asked to contact the University of Pennsylvania’s detective unit at 215-898-4485 or the Philadelphia Police Department’s Southwest division at 215-686-3183.