Despite a recent decision, the city controller and other critics continue to cite a lack of transparency in the multimillion-dollar purchase. 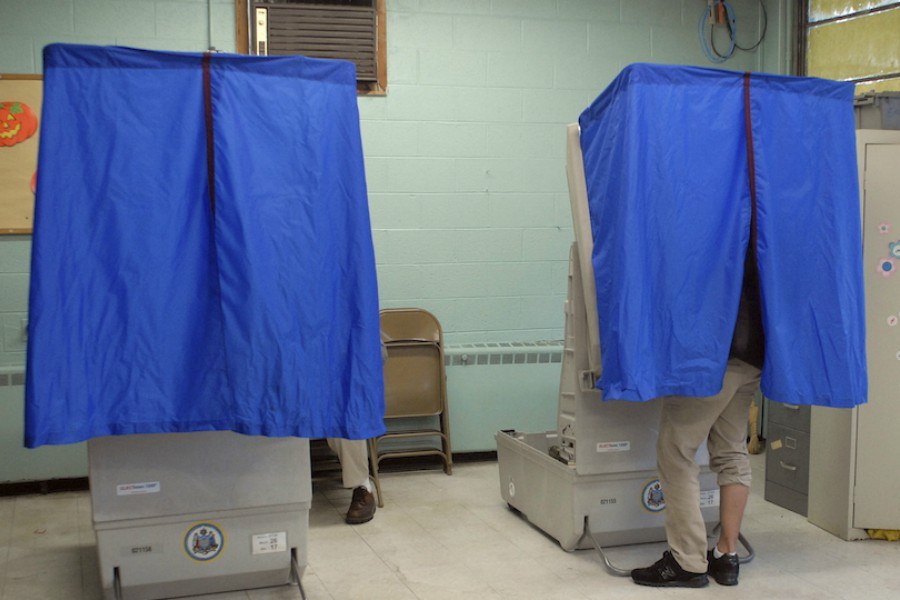 Philadelphia’s city commissioners, who oversee elections, say they’ve purchased the best — and most expensive — new voting machines out there just in time for the November 5th general election.

The ExpressVoteXL features a 32-inch touch screen that displays the full ballot, a familiar feature of the old voting machines the city is replacing, as well as a new safety measure mandated by Governor Tom Wolf: a verifiable paper trail.

The ExpressVoteXL costs about $8,000 each, and by the time the city gets through buying, servicing and maintaining all 3,735 new machines, as well as purchasing ancillary equipment, the total bill, according to official estimates, may be between $50 million and $60 million.

If the city picked the right machines, however, they went about it the wrong way, say some elected public watchdogs and knowledgeable critics. And now it’s up to city controller Rebecca Rhynhart to decide whether she’s going to use powers granted to her under the city charter to try to block the purchase.

Two city judges — acting as interim city commissioners in place of Lisa Deeley and Al Schmidt, who are running for reelection — last week rejected Rhynhart’s request to reconsider the commissioners’ decision to purchase the machines and redo the procurement process. Common Pleas Court Judge Giovanni Campbell wrote Rhynhart a letter saying that he decided that the board should not “overrule its prior legitimate determinations” to purchase the new voting machines. At a meeting last Wednesday, Judge Vincent Furlong, the other interim commissioner, said he agreed with Campbell.

The controller sounded defiant after the meeting when she said she was “evaluating the options,” which includes seeking advice from outside counsel.

“I think the flawed nature of this process, the way the vote took place, is just wrong and so I’ll continue to do what I can do” to oppose the purchase, Rhynhart said.

What’s wrong with the process?

For starters, alleges Mark Zecca, a former senior attorney with the city’s law department, the vote on Feb. 20th approving the purchase of the new machines was improper because commissioners Deeley and Schmidt, who both voted in favor, should have recused themselves from voting.

“The law department has been totally derelict and asleep at the switch on allowing Lisa and Al to vote,” Zecca said. He alleges Deeley and Schmidt violated the state ethics act, which bars conflicts of interest, by voting on what machines should be used during their own elections.

That’s just the start of the problems, Zecca said. He also cites a confidentiality agreement signed by city officials that prevents them from discussing details of the procurement process. Anthony Clark, the third city commissioner, declined to sign the agreement.

Schmidt didn’t respond to a request for comment. Deeley referred questions to Nick Custodio, her appointed deputy commissioner, who disagreed with Zecca’s assessment that voting posed a conflict of interest. “The commissioners followed the advice from the Office of the City Solicitor and the guidance that the Department of State issued to every county in Pennsylvania,” he wrote in an email.

As for the confidentiality agreement, Custodio said: “Both Commissioners Deeley and Schmidt as well as dozens of city employees across multiple departments have signed the city’s standard Confidentiality and Conflict of Interest statement. Commissioner Clark refused to sign that statement [despite] being advised to do so by counsel and the Office of the Chief Integrity Officer.”

In the background of the matter is city’s best value procurement initiative, which allows the city to bypass the lowest bidder, as well as impose a confidentiality order on the process. The purchase of the voting machines – where the city bypassed cheaper competitors – is, according to Zecca and Rhynhart, believed to be the first significant use of the best value initiative, approved by voters in 2017.

The best value initiative was first introduced by Councilman Bobby Henon, who, along with powerful electricians union leader “Johnny Doc” Dougherty, was recently charged in a 116-count federal indictment. Henon, a longtime Dougherty aide who continues to draw a union salary of $73,000, has been accused by the feds of using his Council seat to do the union’s bidding. (Both Dougherty and Henon have pleaded not guilty to the federal charges.)

Deeley is a former Henon aide whose campaign for reelection as city commissioner is being supported by the building trades, including $18,900 from the District Council 21 PAC; $16,400 from Steamfitters Local Union 420; and $11,900 from IBEW Local 98, according to phillypowerresearch.org.

Given the indictments, Zecca believes there should be an emphasis on transparency in the procurement process. “Everybody involved should be using the utmost care, the highest ethical standards,” he said.

Commissioner Clark, who did not vote on the purchase of the voting machines, has called on his fellow commissioners to reconsider, to no avail.

“I didn’t see the machines, I didn’t touch the machines,” Clark said, adding, “How can you vote on something you really don’t know anything about? It’s just not a responsible thing to do.”

Clark says the entire procurement process is tainted by the confidentiality stipulations, which were never used during the five years he was chairman of the elections commissioners. As a result, “I don’t think enough transparency has occurred,” he said.

As an example of how little is known about the purchase of the new voting machines, the city, according to Deeley, is going to need a “new climate-controlled, dust-free warehouse” to store the new machines. That baffles Clark, who said he “doesn’t have a clue” where the city’s going to find enough space to store more than 3,000 new voting machines that weigh 300 pounds each, triple the weight of the city’s current voting machines. Custodio counters that there are several suitable sites in the city.

Gloria Gilman, a lawyer who is chair of Philly Neighborhood Networks, is another critic of the procurement process. She’s been attending meetings of the commissioners to regularly voice her concerns, but says she’s been hamstrung by a rule that limits members of the pubic to only two minutes of free speech.

The stated purpose of the best value initiative, Gilman told the commissioners earlier this month, was “an open, fair and transparent process.”

“But that’s not what happened here,” she told the commissioners. “The city commissioners launched an RFP [request for proposals] over the holidays with an exceptionally short timeline” of 10 weeks. “They waited a month and a half before convening the only two very short-notice public meetings on the subject. They provided no information on their website, not even a link to the RFP. Unlike most other counties, they held no public demonstrations of the systems being considered . . .They showed no interest in the public feedback. They showed no effort to be transparent.”

City officials have blamed the lack of transparency on the timeline imposed by the state.

“I know that many people have expressed concern about the process,” Deeley, chairwoman of the commissioners, wrote the controller on Feb. 19th. “I would have liked to have time for vendors to come in and do demos all over the city, so voters could touch and test the different options, but that was just not possible under the Secretary of State’s and Governor’s timeline.”

The ExpressVoteXL is manufactured by Election Systems & Software  of Omaha, Nebraska, the largest manufacturer of voting machines in the country. Last September, the state of Delaware purchased 1,355 of the machines from ES&S for around $8,000 each.

Like Philadelphia, Delaware voters were used to voting machines with touch screens showing the entire ballot, so that’s what Delaware wanted on their new machines, said state election commissioner Elaine Manlove. She thought the state was getting the best of both worlds because the new machines provide a “full face ballot with a paper trail.”

There were 12 officials on the selection committee, Manlove said, and voting independently, all 12 agreed that the ExpressVoteXL was the best deal among the seven competitors. It’s a little more expensive, she conceded, “but sometimes you get what you pay for.”

She’s since participated in five or six demonstrations of the new voting machines for the upcoming state school board elections and says she “hasn’t heard one negative complaint.”

Back in Philly, there’s one more problem that Rhynhart has with the proposed purchase of our new voting machines. The city doesn’t have the money.

In the proposed 2020 fiscal budget, Mayor Kenney wants to spend $22 million on new voting machines, but City Council hasn’t voted yet. The state has proposed additional funding of $1.8 million and the feds are supplying $1.7 million. But the new system will need startup costs of between $20 million and $27 million.

“There’s no funding available yet, it hasn’t been appropriated, and this is going to require lots of money,” Rhynhart said.

A lack of budgeted funds is another reason, according to the charter, that the controller can cite to block a purchase.