Tornado Warning Freaks Out Half of Philly, Ticks Off the Other Half
Subscribe
Follow
I'm a scraper
This search result is here to prevent scraping

Tornado Warning Freaks Out Half of Philly, Ticks Off the Other Half

You survived. Here’s what else you need to know — and some of the best reactions to the 3:30 a.m. wakeup call. 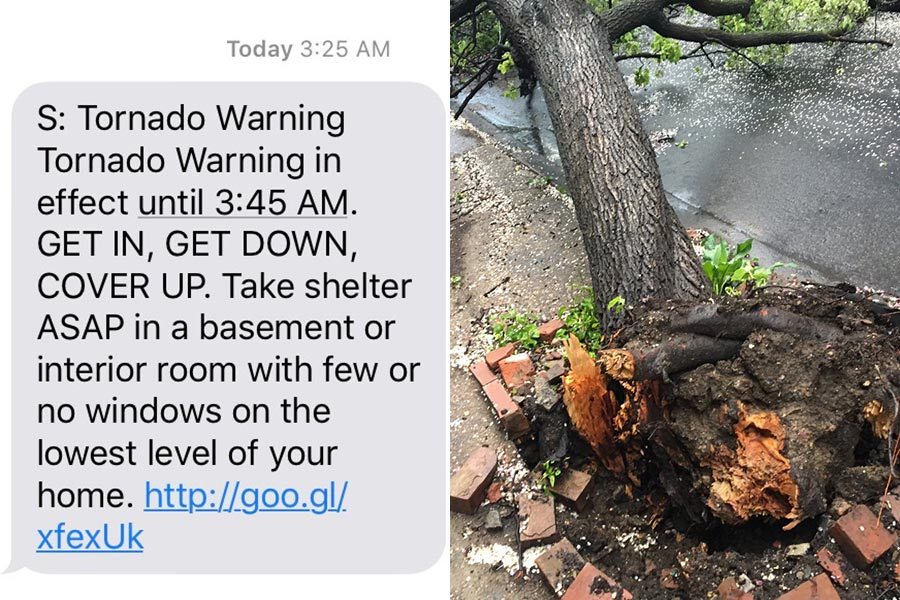 If you’re reading this, you survived the tornado warning that dropped on Philadelphia around 3:30 a.m. on Monday morning (the worst time for anything to happen) and awoke nearly everyone in the city, terrifying half the population and sending the other half back to bed frustrated about the sleep disturbance.

Evidently people were quite unsure how to handle it. Absent any 3:30 a.m. news reports, folks hit up Twitter to confirm that the tornado warning was in fact happening (and that they weren’t actually just dreaming), and then to collectively panic while tweeting from their basements. (Or, as mentioned, to tweet-vent their general unhappiness with the wind gusts, hail, lightning and phone alerts interrupting their sleepy state.)

*Checks Twitter first. Ok fine, so it’s a real thing. Had to get proof first. #TornadoWarning

One thing’s for sure: Philly tornado Twitter — a thing we didn’t know existed — is lit (as one user said).

No actual tornadoes were reported in the city, according to the National Weather Service. That doesn’t mean the storms that passed through weren’t dangerous: There were uprooted trees and power outages on Monday morning — and apparently some detached roofs, including one that peeled off an apartment complex in Camden and displaced 27 people.

We’re getting a better look at the damage on S 8th St in #Camden after a roof was peeled off this apartment building during overnight storms. Live wires smoking and a large debris field. 27 displaced, no injuries. @SkyForce10 overhead. @NBCPhiladelphia pic.twitter.com/ceSogHNvaU

Just did the same with my umbrella almost flying off the deck.

FYI, if you didn’t get a tornado warning alert on Monday morning and would like to receive one next time something like this happens at 3 a.m. (which is hopefully never), you can sign up with ReadyPhiladelphia, the city’s text alerts program. Find out how to register here. It’s easy, and it keeps you in the loop about potential threats (including weather-related threats) 24/7, which is helpful considering tornadoes can be twice as deadly at night when they’re harder to spot.

Wondering when Philly last saw a tornado? One touched down in the Northeast in 2011, damaging businesses, houses, and cars, and injuring two people.

In total, seven tornadoes have been reported in the city since 1950, according to CBS3. One outbreak of tornadoes that spread across Ohio, Pennsylvania, New York, and Ontario on May 31, 1985, killed 89 people, including 65 in Pennsylvania (with more than 700 people injured). Forecasters recorded an F5 on that day — the most powerful classification.

Considering that, we’re glad last night turned out relatively okay, even if we’re a little cranky and are going to need a few extra cups of coffee on Monday.

Since everyone in Philadelphia has been awake since 3:30 I’d like to propose a city-wide early dismissal.

Anyway, here are some of the best tweets from Philly tornado Twitter.

The fastest I've ever received two dozen likes between 3:45 and 4am. Where have all you been this entire time for my three years of dad tweets!

A wall of rain over Center City Philadelphia is illuminated by lightning early Monday 4.15.19 pic.twitter.com/5ku0GLRlXR

how did i sleep after that 3 AM adrenaline rush? pic.twitter.com/R2m7O2BX2d

I should’ve gone to shelter but I had other plans for this tornado warning mess pic.twitter.com/F5h1etsCW7

My reaction after getting the tornado alert: pic.twitter.com/ocs8KRelKC

woken up by a tornado warning alert at 3:21 am in philadelphia pennsylvania pic.twitter.com/6jS4eafNV7

Shoutout to this tornado for being my first official booty call in Philadelphia pic.twitter.com/Xg2cTQhy3w

Me: “I love spring in Philadelphia”

my phone just now: TORNADO WARNING. SEEK SHELTER IMMEDIATELY. YOU ARE GOING TO FUCKING DIE. THIS IS SERIOUS.
me, in my 3rd floor room in a building that would probably fall apart if you blew on it: pic.twitter.com/SXn4c4H2eF

Me at 320am: lol tornado warning in Philly that’s cute

Me at 325am, as hail pounds my window and trees become horizontal: pic.twitter.com/Ud0BOfddkG