Like New York, Philly Is Weighing a Traffic Congestion Fee

To combat traffic gridlock, the city says it’s mulling the idea of making drivers pay to access our most crowded streets. 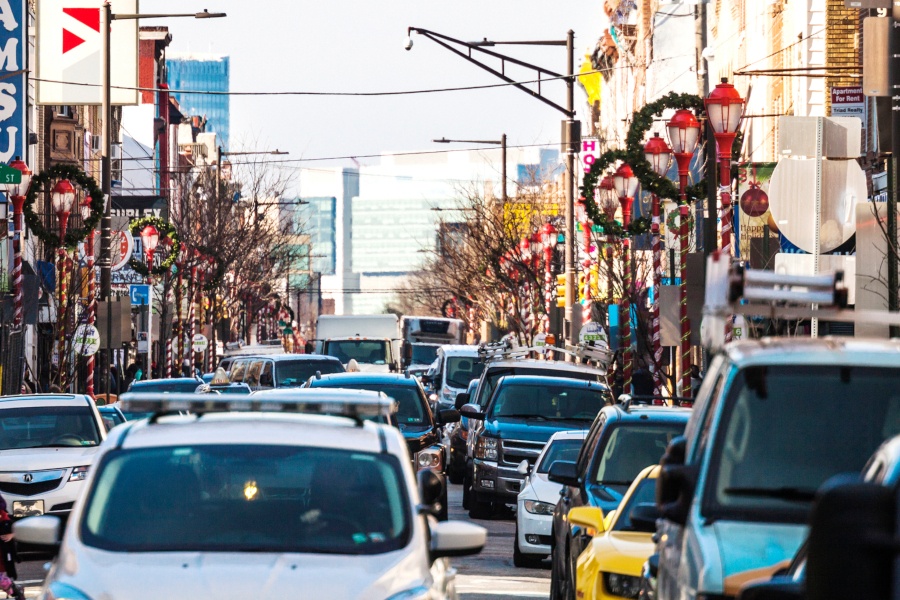 Traffic on South Street | Photo by peeterv via Getty Images

New York will soon become the first U.S. city to charge drivers to access its most congested neighborhoods — and Philly says it’s watching closely and considering the same move.

Beginning in 2021, New York drivers will have to pay what will be called a “congestion fee” to enter Manhattan below 60th Street, where the average speed for vehicles is 4.7 mph (down from 6.9 mph in 1994). The fee amount has yet to be determined — Gov. Andrew Cuomo has proposed consulting a panel of transportation experts to set the cost.

New York isn’t the first municipality to implement such a fee — cities like London, Singapore, and Stockholm have all succeeded in cutting down on traffic since adopting similar policies. In London, the number of private cars entering the city’s designated congestion-fee zone dropped 39 percent between 2002 and 2014, according to CityLab.

Kelly Cofrancisco, a spokesperson for Mayor Jim Kenney, said Philly is considering congestion pricing for the first time in its history.

“We always pay attention to policies in other cities to see if they can be adapted to fit Philadelphia’s unique circumstances, and we’ll be watching NYC’s experience with congestion pricing closely to see how this can help improve equity, safety, sustainability, and mobility,” Cofrancisco said in a statement first sent to The New York Times.

While a congestion fee in Philly might seem like a long shot, it’s not unexpected that officials are weighing the option. It almost goes without saying that street-blocking construction, the rise of ride-sharing, and an increase in delivery services have spurred major gridlock in the city (which, as some point out, is a sign of economic growth), and residents and officials want solutions. In October, Philly officials released CONNECT, an ambitious seven-year plan to cut back on traffic congestion and (aligning with the goal of a congestion fee) ultimately make our roads a little less car-centric. The proposal prioritized revamping the city’s bus and trolley networks (including increasing bus speed by 5 percent), as well as increasing bike ridership and ensuring “that public transit is the first travel mode of choice” for Philadelphians.

Megan S. Ryerson, associate dean for research at Penn’s School of Design (and the UPS Chair of Transportation), said congestion pricing would likely help reduce traffic in Philly, especially when combined with plans included in the city’s CONNECT proposal — like better management and enforcement of loading zones. But at the same time, she said, Philly has to ensure that it’s offering “high-quality alternatives to driving.”

“Right now, as Philly is today, it’s difficult to say, ‘We’re going to implement a toll and not do anything about transit,’” Ryerson said. “There are gaps in our transit networks, both in terms of service area and frequency, and certainly in reliability.”

In New York, a significant portion of the congestion fee’s estimated $1 billion in annual revenue will go toward improving the city’s public transit system, including its debilitated subway network. The hope is that, as services improve, more residents will opt to use public transit instead of drive.

Cofrancisco said it’s not clear whether Philly officials would consider using a potential congestion fee to fund public transit — talks of such a move are still “in the beginning” stages, she said. Details regarding a potential fee amount or location were not available, though Cofrancisco noted that “the Center City core is something that we have looked at for our other enforcement pilots” regarding congestion.

The city is also considering factors like environmental impact and equity, Confrancisco said. New York’s congestion fee has been met with backlash from some who say it could punish low-income residents, especially those who rely on cars to drive or live in areas where public transportation options are scarce.

“Not all people who drive do so by choice,” Ryerson said. “Center City runs on all kinds of workers — high-salaried employees and people with much longer hours and lower pay. When we think about a toll that restricts access to Philadelphia, we need to think about who is affected by that toll, and ensuring high-quality transportation can go a long way in addressing those equity issues.”

Either way, Ryerson said, congestion pricing should “be on the table” in Philly, which “was not built for the transportation system we demand today.”

“We’re trying to fit all of these different modes on these tiny little streets, and we don’t have any more capacity,” she said. “We’re not going to build our way out of this problem — we’re going to implement policy to change it.”