As the petition nears 10,000 signatures, university officials say they will offer two walk-in vaccination clinics at no cost to students or school community members next week. 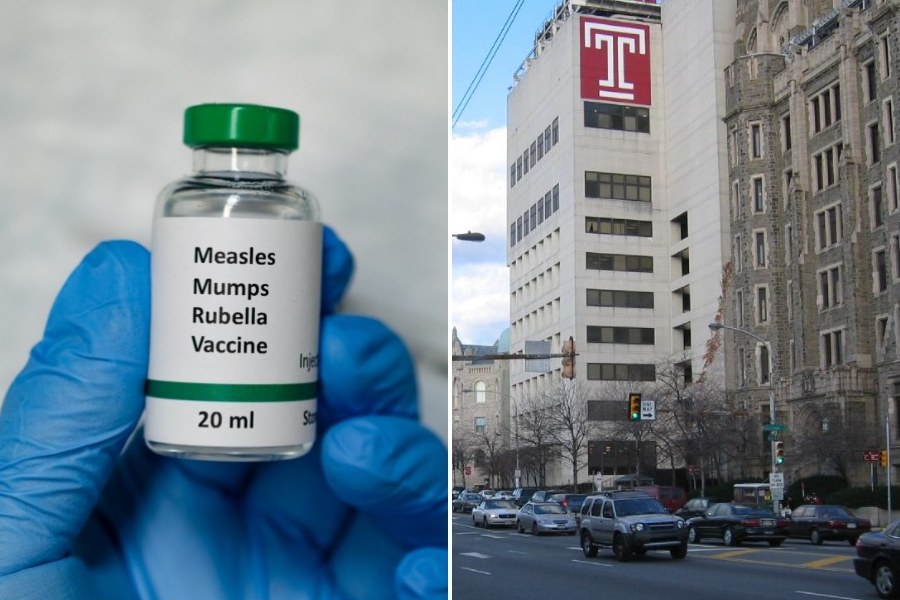 L: Photo via Getty Images | R: Photo by abdullah am via Creative Commons

Earlier this month, we wrote that the mumps outbreak at Temple University had spread to 15 cases. Now, just 10 days later, that number has soared to a whopping 74.

As the university community and city health officials prepare for that sum to continue to grow, students are circulating a change.org petition to temporarily close the school in hope of stopping the spread of the highly infectious disease. Just two days after the petition was created, it’s nearing its goal of 10,000 signatures.

“Mumps is slow to show signs, so the spreading of the disease is probable and very likely, especially considering the type of community that exists within a college campus,” the petition reads. “The fact is, as long as Temple continues to stay open, and classes and activities continue to be held, this outbreak will not cease.”

Despite the shutdown support, a Temple spokesperson said officials aren’t considering closing the school at this time. The city’s health department has not recommended doing so, as such a step would “not stop the ongoing spread of mumps,” department spokesman James Garrow said.

“Since it takes weeks for symptoms to develop, people who were exposed and get sick before [the school closes] will still be able to spread [the disease] when the school reopens,” Garrow said.

Instead, the university is offering doses of MMR, a combination vaccine which is most effective at preventing the infectious disease, as well as measles and rubella. The vaccine is currently available through Temple’s student health services at an out-of-pocket cost of $63.

The school and the health department will also offer the vaccine at no cost to students and Temple community members next week, Temple spokesman Chris Vito said. (Students had previously complained that the vaccine’s price-tag, which isn’t always covered by insurance, made it unaccessible to those who couldn’t afford it.) The university will offer two walk-in vaccination clinics in the Great Court of Temple’s Mitten Hall on March 27th and 29th. Temple community members can visit the clinics between 9 a.m. to 4 p.m. on both days.

“It’ll be a walk-in clinic, just like we offer for flu season,” spokesman Chris Vito said. “The vaccine will be available to all in the Temple community.”

Some students who have contracted the disease at Temple were previously given the MMR vaccine, according to school officials. Children typically receive two doses of the vaccine by the time they’re in second grade, but the treatment is only 88 percent effective, and the CDC says it can wear off after about 10 years. For that reason, the organization recommends that anyone in risk of an outbreak in close-contact settings like Temple receive a third dose of MMR — called a “booster” dose.

Garrow says the health department is continuing to work with Temple and the CDC to supplement the school’s vaccine capacity. But in the meantime, he said it’s important for students to help out in other ways — by washing hands with soap and water frequently, not sharing cups and utensils and staying home when they feel sick. Mumps symptoms typically begin with a few days of fever, as well as headaches, muscle aches, tiredness and loss of appetite. After that, most people develop swelling of their salivary glands, resulting in puffy cheeks and a tender, swollen jaw.

“The best way to stop mumps is for sick people to stay away from others for five days, and for everyone to make sure they’re vaccinated,” Garrow said.